Back to the land: 40 years of Mike Leigh’s Nuts in May

Hilarious it may be, but Mike Leigh’s classic camping comedy Nuts in May also sounds a darker warning about our relationship with the British countryside. 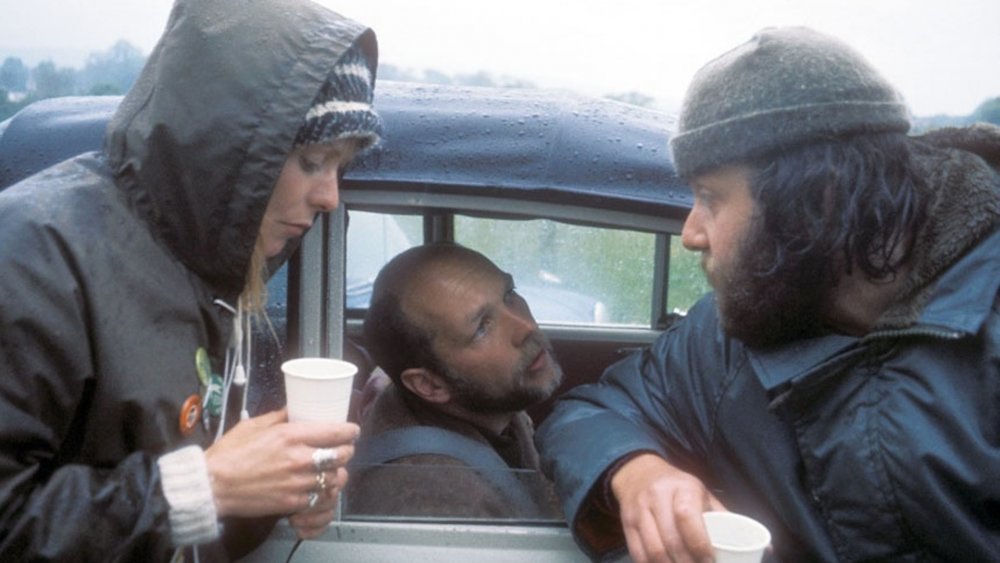 Though far lighter than many other works for film and television by Mike Leigh, his 1976 episode for BBC’s Play for Today strand, Nuts in May, surprisingly asks more pertinent and still relevant questions than many of his more overtly political and visceral social-realist works. This is because of its effective framing around the landscape and the barriers created within the rural environment by the British class system.

First broadcast on the 13th of a particularly snowy January, Nuts in May must have seemed initially alien with its sunny jaunts and green chalk-land exploration. But alongside this sense of a revitalised spring, also implied by the unusual title taken from the nursery rhyme of the same name, is a portrayal of the slow disintegration of social barriers initiated by the journey into the wild. While the natural landscape often promises refreshment and healing, here the reality turns out to be very different. 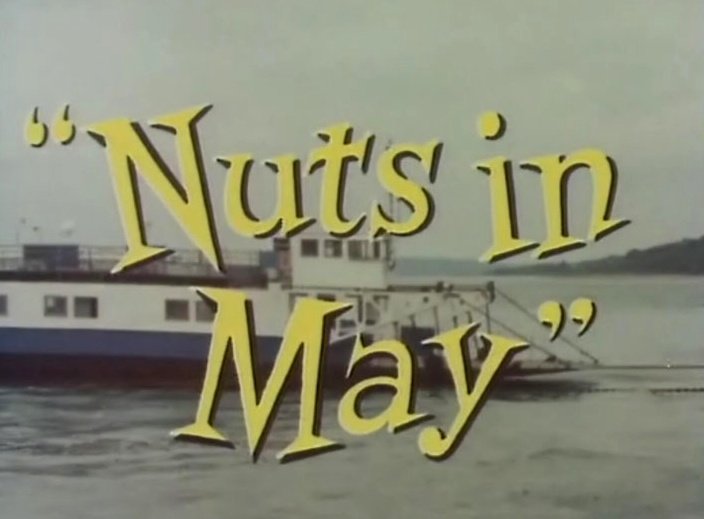 The play follows a pair of middle-class suburbanites, Keith (Roger Sloman) and Candice-Marie (Alison Steadman), as they take a break from their typical day-to-day monotony by replacing it with an equally meticulous monotony disguised as a fun exploration of rural Dorset. They pack their Morris Minor to the brim and pay in advance to camp in an initially tranquil site. With expert precision, Keith leads Candice-Marie through a range of breathless tourist activities, including looking for fossils in a quarry, walking bracingly along the route of the Jurassic coast, and a whistle-stop visit to Corfe Castle.

But all is not well in the sanctuary of their holiday as various problems arise with the pair’s camping neighbours, from the noisy radio-playing Ray (Anthony O’Donnell) to a loud pair of Brummies starting illegal fires to cook with. After several confrontations and a minor breakdown, Keith and Candice-Marie are forced to leave the site and find a new plot to spend the rest of their holiday on, though not before Keith, the arbiter of sanctimonious rules and regulations, has been humiliated by a policeman. Blocking his rear-view mirror with a miscellanea of holiday necessities was his downfall. 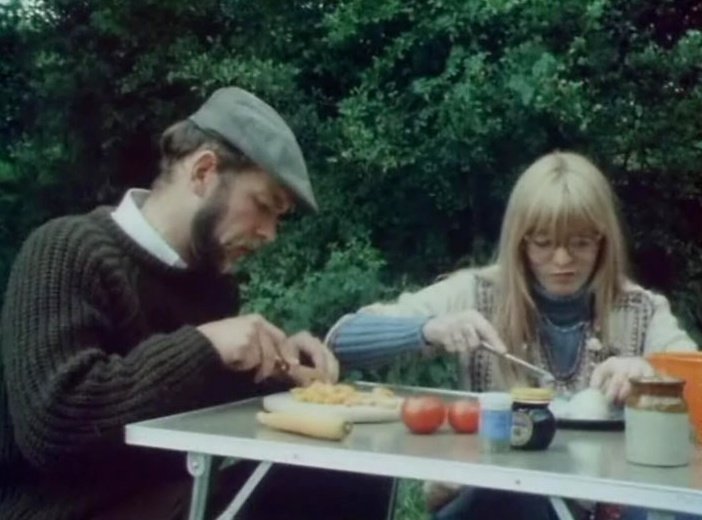 One of the narratives that Nuts in May exposes as questionable, perhaps even more so in hindsight, is the simplistic notion of the rural landscape healing wounds caused by the toil and bustle of urban life. As Keith especially finds out, it actually turns into the reverse by unleashing the more primitive and rule-breaking aspects of the human condition, traits often reserved for and assumed as being part of an urban environment. Even if it is clear that all of the main characters are from inner-city areas, their baggage of cooked-up social pressure is ironically unleashed rather than quelled by the Dorset landscape.

Many landscape-infused works from this same period touch upon this in some way. Jonathan Miller’s M.R. James adaptation, Whistle and I’ll Come To You (1968), for BBC Omnibus, finds a parallel failure of suburban enlightenment and academia falling apart as it underestimates the East Anglian landscape and its impossibly old menaces. Another Play for Today episode, Robin Redbreast (1970) – directed by James MacTaggart and written by John Bowen – finds an Oxbridge urbanite falling foul of a village’s old ways and violent, ritualistic adherence to a landscape-based pagan belief system. Yet Nuts in May does something slightly different to even these strange examples. 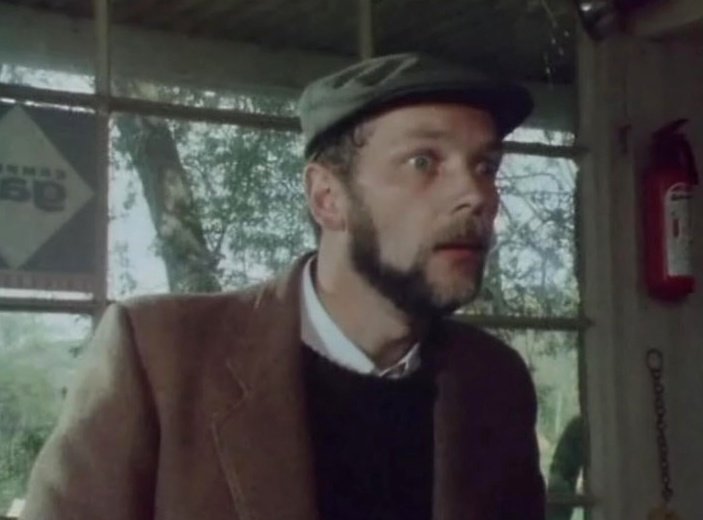 The unfolding drama and descent into eventual, if comical, violence comes from the overall anarchy that the rural realm seems to let loose. Keith’s measured and meticulous adherence to the rules finds little purchase when confronted with the Brummie pair’s illegal fire-building. His reasoning with them fails, ultimately culminating in the release of his own pressured violence, swinging at them psychotically and appropriately with the branch of a tree.

Imagining the same scene in an urban environment highlights just how much the rural area is shifting the sensibilities of the characters. It’s the same pressure that’s unleashed in Ben Wheatley’s Sightseers (2012), though the increasingly violent pair in their film take it to impossibly psychotic territory – a sort of Michael Myers exercise sponsored by National Trust gift shops and English Heritage afternoon teas. 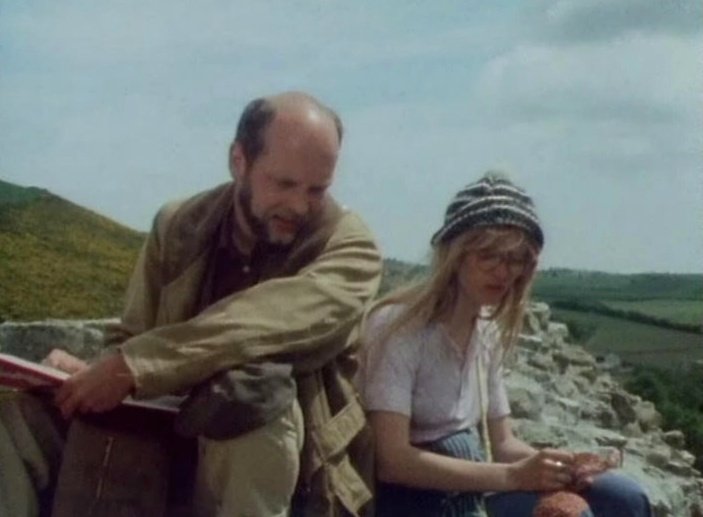 The rural does not provide Keith and Candice-Marie with the slightly more pleasant canvas to enact their repetitive habits upon as they (or at least Keith) had clearly hoped for. Instead, it forces them to confront the repression of their puritanical lives through realising that the grass is not greener, as people are the real makers of any socio-geographical identity.

This was a growing theme in literature of the 20th century too. In writing by the likes of Edward Thomas, George Ewart Evans and J.A. Baker, the sheer indifference and toil of rural life – rather than the sponge that rural Britain was supposed to be, soaking up urban and suburban angst – was quietly questioned. 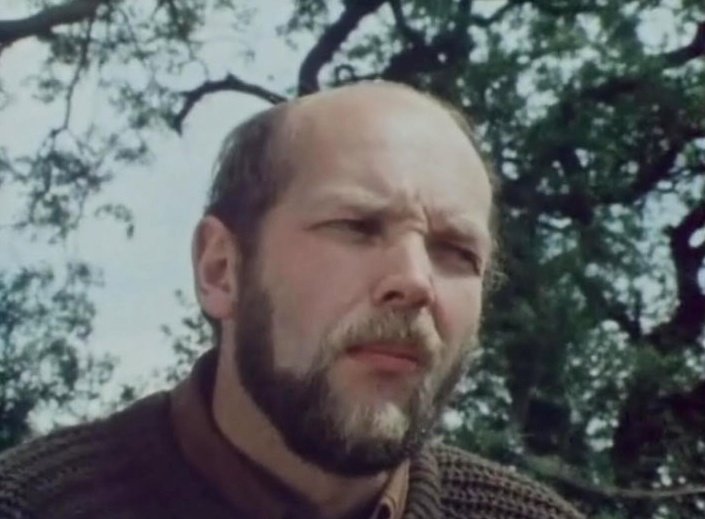 Equally in film, these ideas had been gradually taking hold at almost the exact same time as Leigh’s play. In David Gladwell’s Requiem for a Village (1976), the same truth that Keith had clearly been blind to, that of the violence conjured when urbanites enter the rural realm (either as victims or as progenitors) is palpable. While in Kevin Brownlow and Andrew Mollo’s Winstanley (1976) the sheer toil and fight to simply be allowed to work the rural pastures is laid all too bare.

Keith has also reversed the journey and desires of the main character from Peter Hall’s Akenfield (1974), who wished to escape his rural life for something more urban. Keith, of course, learns these lessons the hard way, descending into violence and eventually humiliation. It is equally apt that, when finally finding a new site to stay for the rest of the holiday, he is forced to finally break his own belief in the rules and climb over a barbed fence to avail himself of the facility of the woods.

Though the hardship of rural life was all too prescient in cinema and television of this period, Nuts In May is one of the first examples to properly address the psychosis unleashed in a domestic sense, whereby even a tranquil coastal holiday can remove those social inhibitors keeping us delicately one step away from murdering the next person to cause us any annoyance. 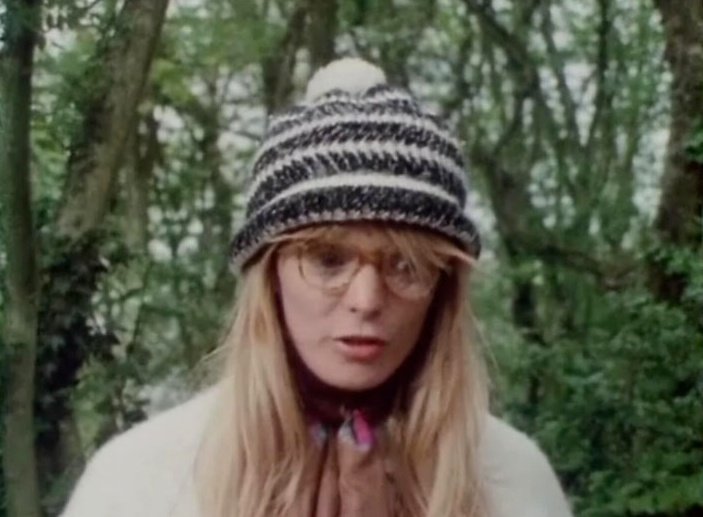 Perhaps what makes Nuts in May so special was that it was suggesting all of this in a period when such ideas were still being romanticised, especially by the suburban middle-classes. The ‘back-to-the-land’ movements that were in vogue in the era are a surreal backdrop to Leigh’s film. Nuts in May was, after all, broadcast with the first year of The Good Life (1975-77) already supplanted into the consciousness of the British public. With that series being the poster-boy for such ‘grow your own’ movements, Nuts in May feels like a strange parallel narrative where, instead of giving up the stressful job and attempting a simpler life in the suburban realm, as happens to Tom (Richard Briers) in the series, we see what would happen if he had decided to simply take a holiday to Dorset instead.

Even more fittingly, Dorset is the same county that saw Reggie Perrin (Leonard Rossiter) – at the beginning of every episode of the series The Fall and Rise of Reginald Perrin (1976-79) – having a minor breakdown, finding the only escape from suburban tedium to be a failed suicide attempt on that same stretch of Jurassic coast.

Keith is a distant cousin of both Tom and Reggie, one who made the wrong decision and is ultimately stuck with the solitude of his rule-keeping. Breaking the rule of fenced boundaries and climbing over to answer nature’s only call left open to him, Keith is really a sympathetic fallen idol of sorts, albeit one who sings awful folk songs and insists on chewing food 72 times before swallowing.

He and his rules are barely functioning in the landscape by the end of the play, the sort of Perrin exercise of taking off one’s clothes and wandering into the sea being conceivably only one step behind his barbaric earlier efforts with the tree branch. As Keith aptly suggests when Candice-Marie worries about the opinion of ghosts returning to find the coastline’s abundance of litter: “They’d find it difficult to comprehend all the changes that have taken place in the world.”

Related to Back to the land: 40 years of Mike Leigh’s Nuts in May