The Mediatheque comes to Scotland

Curator Simon McCallum reports from the opening of the first BFI Mediatheque in Scotland. 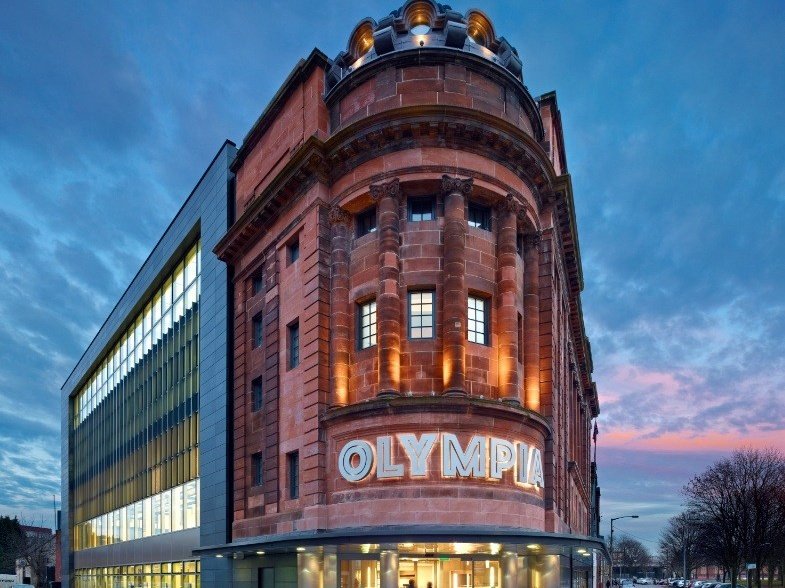 London, Thursday 21 February, 5.30am: while the journey ahead hardly trumps Richard Hannay’s arduous and action-packed flight north in Hitchcock’s The 39 Steps (1935), for someone with an aversion to early starts it’s nearly as traumatic. But all in a good cause: our first BFI Mediatheque in Scotland is about to make its debut before the good folk of Glasgow.

This is in fact our sixth Mediatheque: since the first was launched as part of the new BFI Southbank in 2007, the network has developed to include libraries in Cambridge and Wrexham, Newcastle’s Discovery Museum and Derby’s QUAD centre. An early ambition for the project was to have at least one in every region and nation of the UK: while the BFI’s online plans are gathering pace, the Mediatheques still offer the largest publically available collection of titles from the BFI National Archive.

Our latest home is a thing of beauty: Glasgow is renowned as a city of film lovers, and Bridgeton’s Olympia was once an East End landmark. By the 1920s the original Edwardian music hall had become a fully-fledged picture palace; subsequent incarnations as a bingo hall and a furniture store, followed by a disastrous fire and dereliction, echo sad stories of decline at movie meccas around the UK. The new Bridgeton Library is a bold step in regenerating this long-neglected part of Glasgow. To be part of the building’s rebirth and to reconnect with its cinematic heritage is a real privilege.

There’s much press interest in the new facility, so it’s eyes-and-teeth time for interviews with BBC Scotland TV and radio, STV and other local journalists. For the launch event itself, our hosts have laid on a light-hearted and endearingly eccentric evening: food served on clapper boards, library staff dressed as 1950s usherettes, and outside a red carpet guarded by a piper in full regalia welcoming guests – accompanied by a Three Stooges tribute act. And the guests keep coming, from all over the city, especially satisfying since the main library had its own inauguration several weeks earlier.

The obligatory glasses of fizz are upstaged by an array of malt whiskies – ideal Scotch courage for the looming speeches. Glasgow dignitary Baillie Liz Cameron’s effortlessly warm and witty turn puts the fear into the rest of us. I squeeze in a nod to the brand new boxing gym above the library; pugilistically-minded Mediatheque visitors can enjoy footage from Edwardian Hull and 1930s Cardiff, and in the new ‘Scottish Reels’ collection – curated to mark the launch – a little gem from 1920s Ayrshire courtesy of our friends at the Scottish Screen Archive.

The following day saw the official public opening of the Mediatheque, and though I slightly regretted the whisky, hosting the two introductory sessions proved to be a joy. The enthusiasm of the people of all ages and backgrounds who turned up to have a go was genuinely rewarding. Nobody minded that we can’t quite offer the whole archive (nearly a million titles and counting). With some 2,500 titles equating to over 1,300 hours of viewing, there’s plenty to while away a year’s worth of rainy afternoons in any of our host venues. I am often asked why we don’t just “chuck it all online”, so a big part of explaining the Mediatheque revolves around the perennial challenge of rights ownership.

This visit offered a reminder of things we take for granted – not least the internet. Many residents of Bridgeton and other areas of the city don’t have access to the web at home, and the Library is a vital new hub in developing computer literacy. I hope the Mediatheque can play a part – indeed it was originally designed with simplicity and accessibility in mind. The role of moving image in reminiscence was highlighted by a carer who arrived with a group of dementia sufferers. We settled them in to enjoy the wonderful British Transport Films travelogues The Heart Is Highland (1952) and Glasgow Belongs to Me (1965), the latter immersing them in the sights and sounds of the city of their youth and, we hope, invoking memories otherwise locked away out of reach.

Though our schedule was hectic, we (that is, myself and my colleague Clare Harwood, whose passion for the Mediatheque has helped keep the show on the road) couldn’t have been given a warmer welcome. My thanks to all at Bridgeton Library, Clyde Gateway and Glasgow Life: we leave our latest ‘baby’ in safe hands, and I hope our modest contribution to the city’s rich cultural life proves to be a hit.