Marilyn Monroe: a life in portraits

Sensational photographs of one of Hollywood’s most famous screen stars. 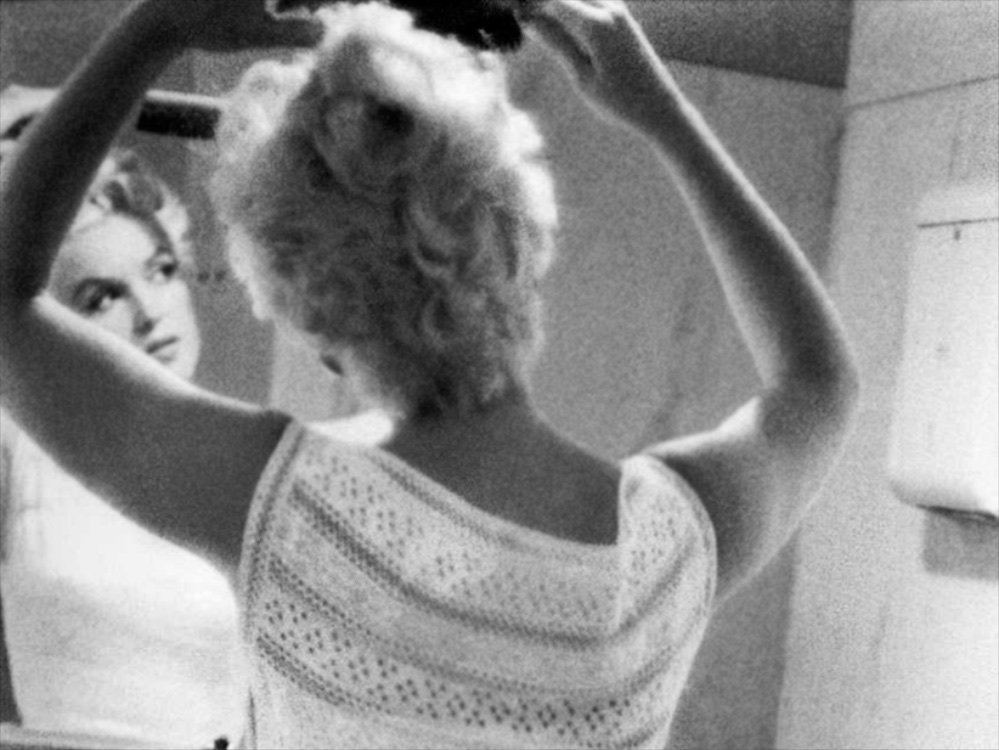 A Marilyn Monroe season runs at BFI Southbank throughout June 2015.

Images from BFI National Archive with thanks to Twentieth Century Fox, Magnum Photos and the Estate of Milton H. Greene.

In Richard Dyer’s Stars, first published by BFI in 1979, the author refers to Marilyn Monroe’s image as “situated in the flux of ideas about morality and sexuality that characterised 1950s America”. Indeed, her image transcended her films, and swiftly became firmly entrenched in pop culture. Andy Warhol (Marilyn Diptych, 1962) and Richard Hamilton (My Marilyn, 1964/65) both manipulated her photographic image using a silkscreen process, provocatively referencing her wide eyes and open mouth. In the early 1950s, Monroe was put under contract by Darryl F. Zanuck and became the leading artist at Twentieth Century-Fox. Her public persona was constructed, to a large extent, through the distribution of a wide variety of images, which served to increase her popularity with cinema goers. 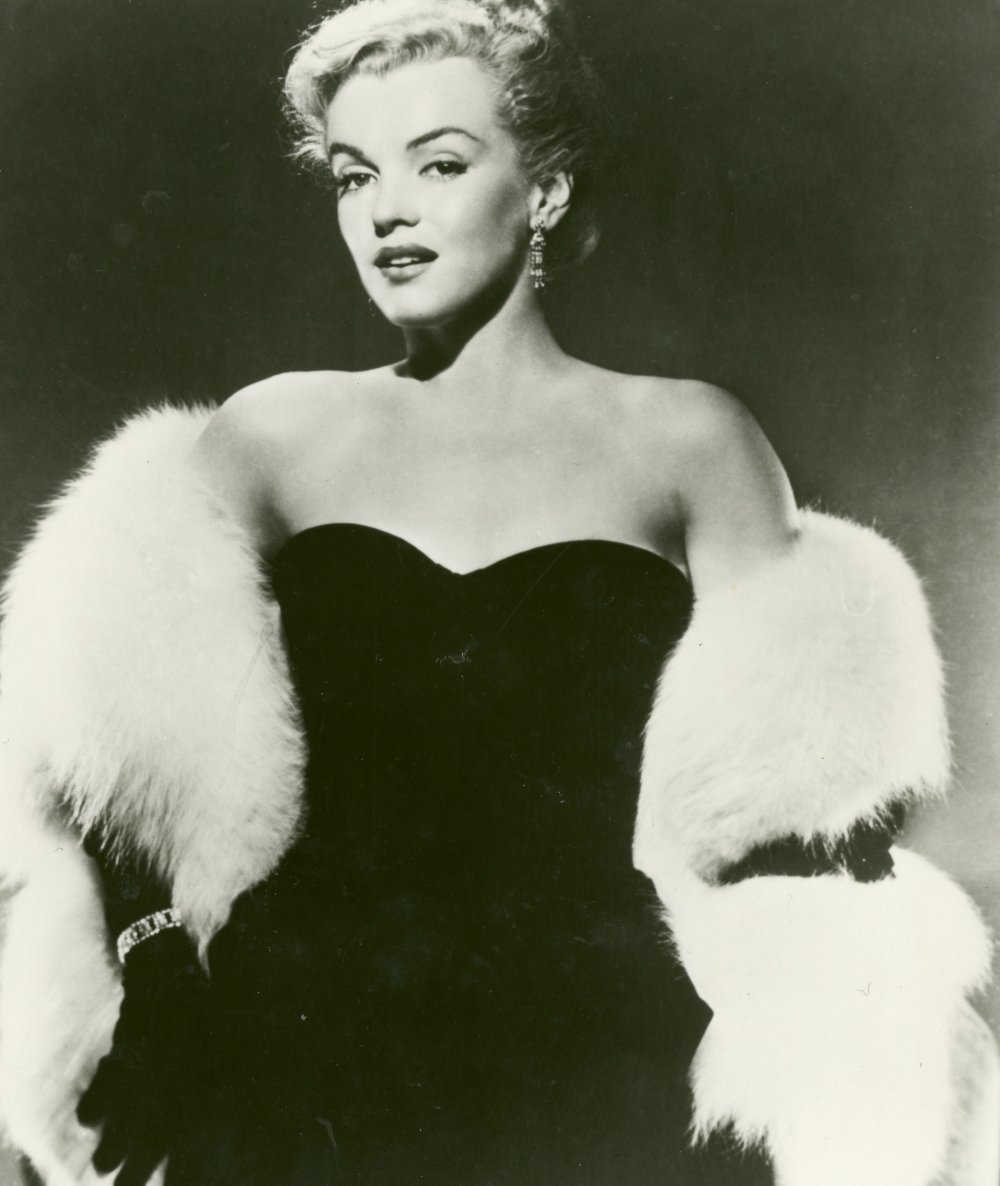 Promotional still of Marilyn Monroe with white fur and diamonds 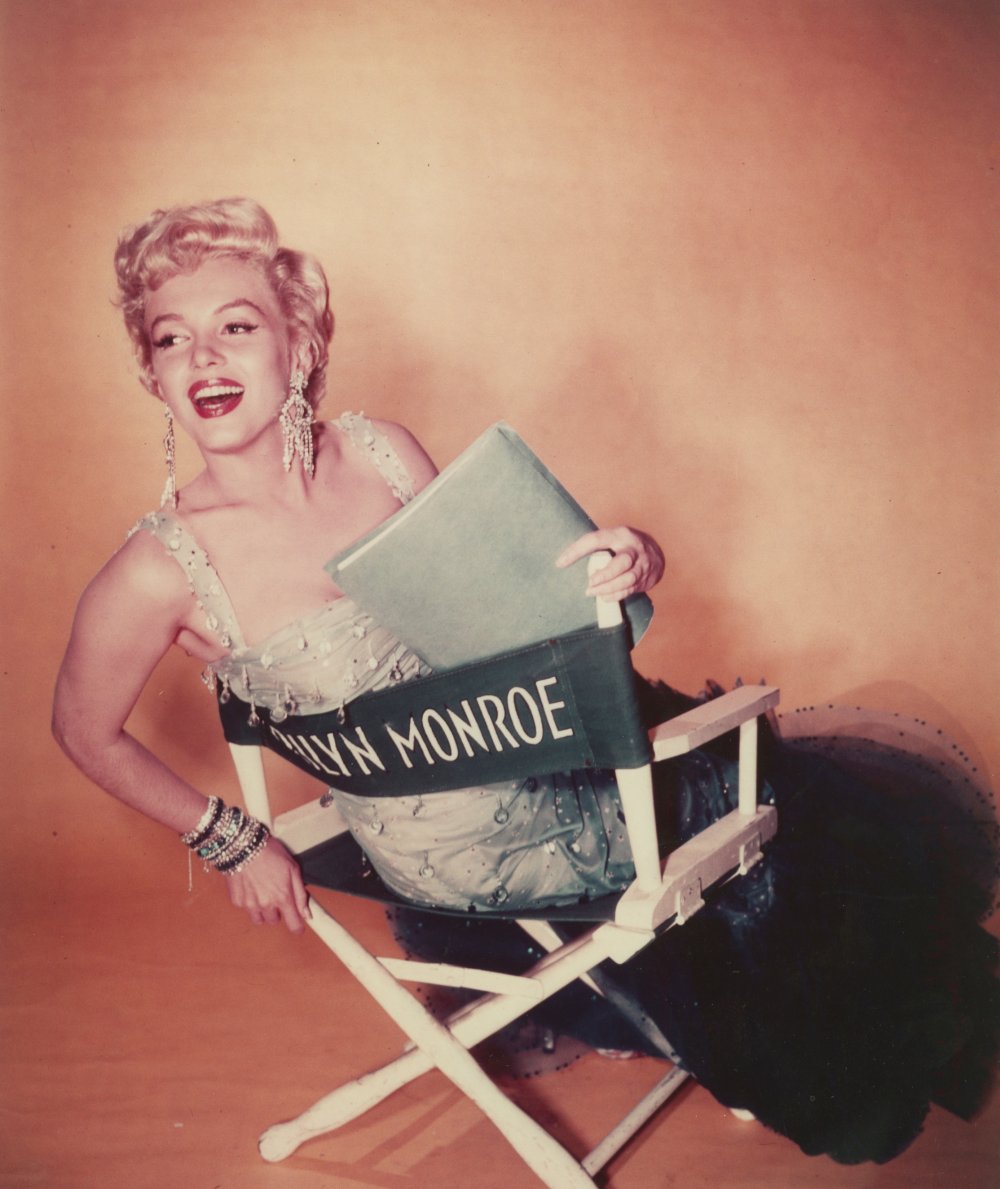 These were sent out to fan magazines with biographical details, including the star in question’s vital measurements. Publicists often created stage names, and thus Norma Jeane Mortenson became Marilyn Monroe. If fans responded positively to their films, stars were offered larger and more lucrative roles. The volume of fan mail also dictated how much money the studio would spend on glamour portraits. The chief portrait and still photographer at Fox was Frank Powolny (born in Vienna in 1901). Powolny did several famous sessions with Marilyn, including one for the 1953 thriller Niagara. A typical prop in such photos was a personalised chair, which worked as a way of identifying actors until they became more familiar with the public. 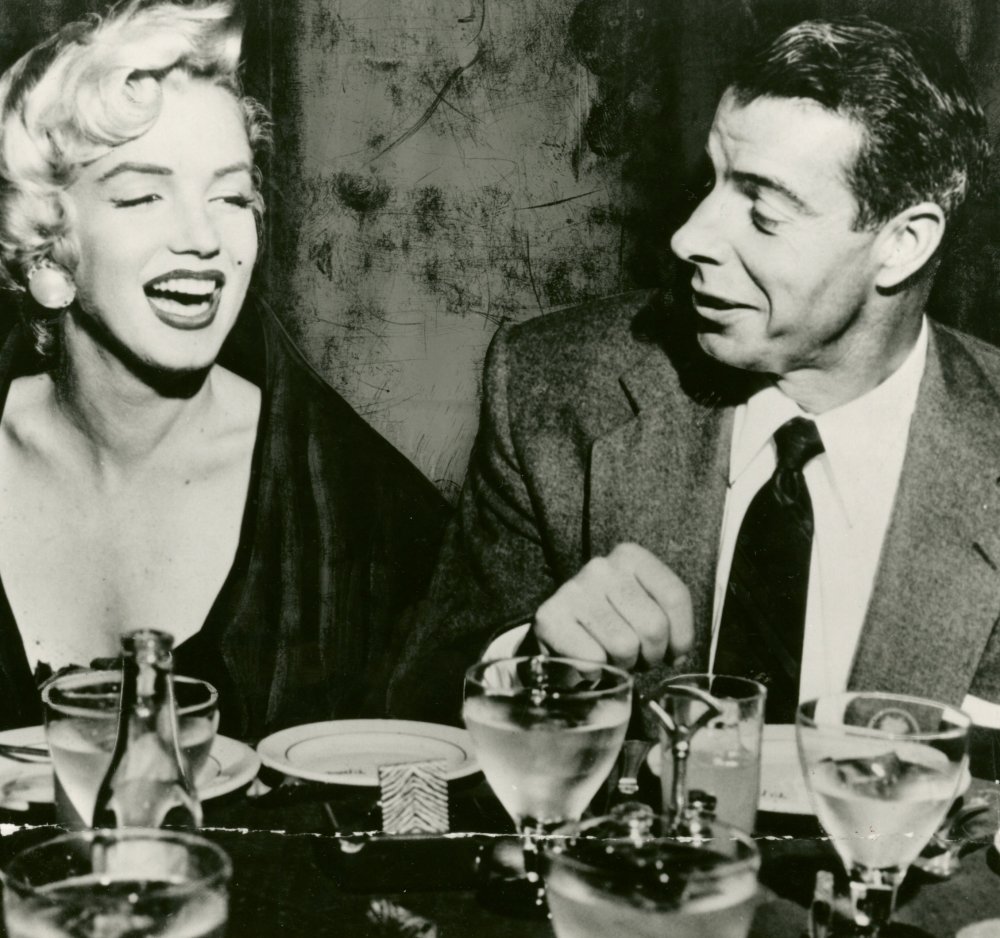 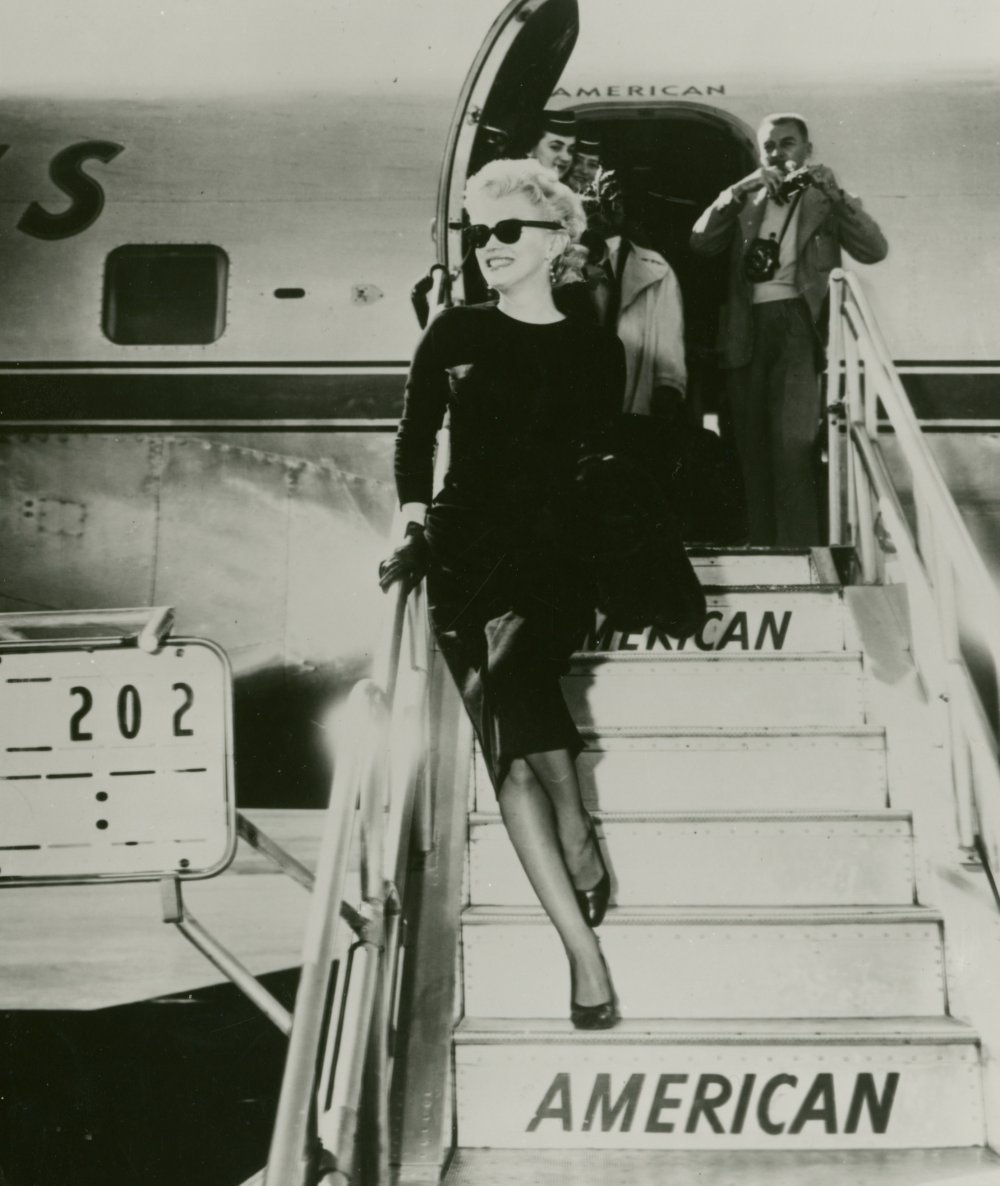 Publicity still of Marilyn Monroe arriving at the airport 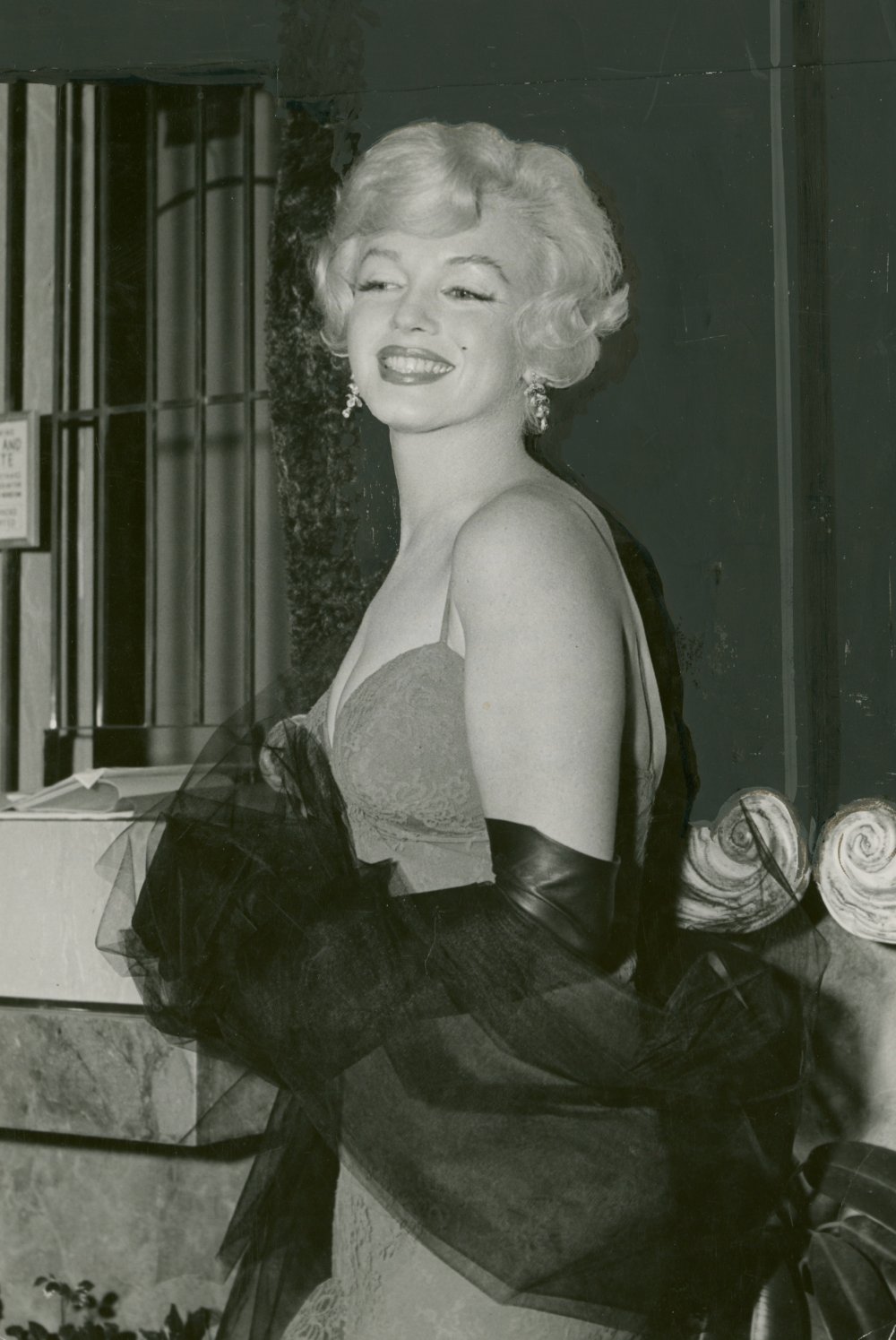 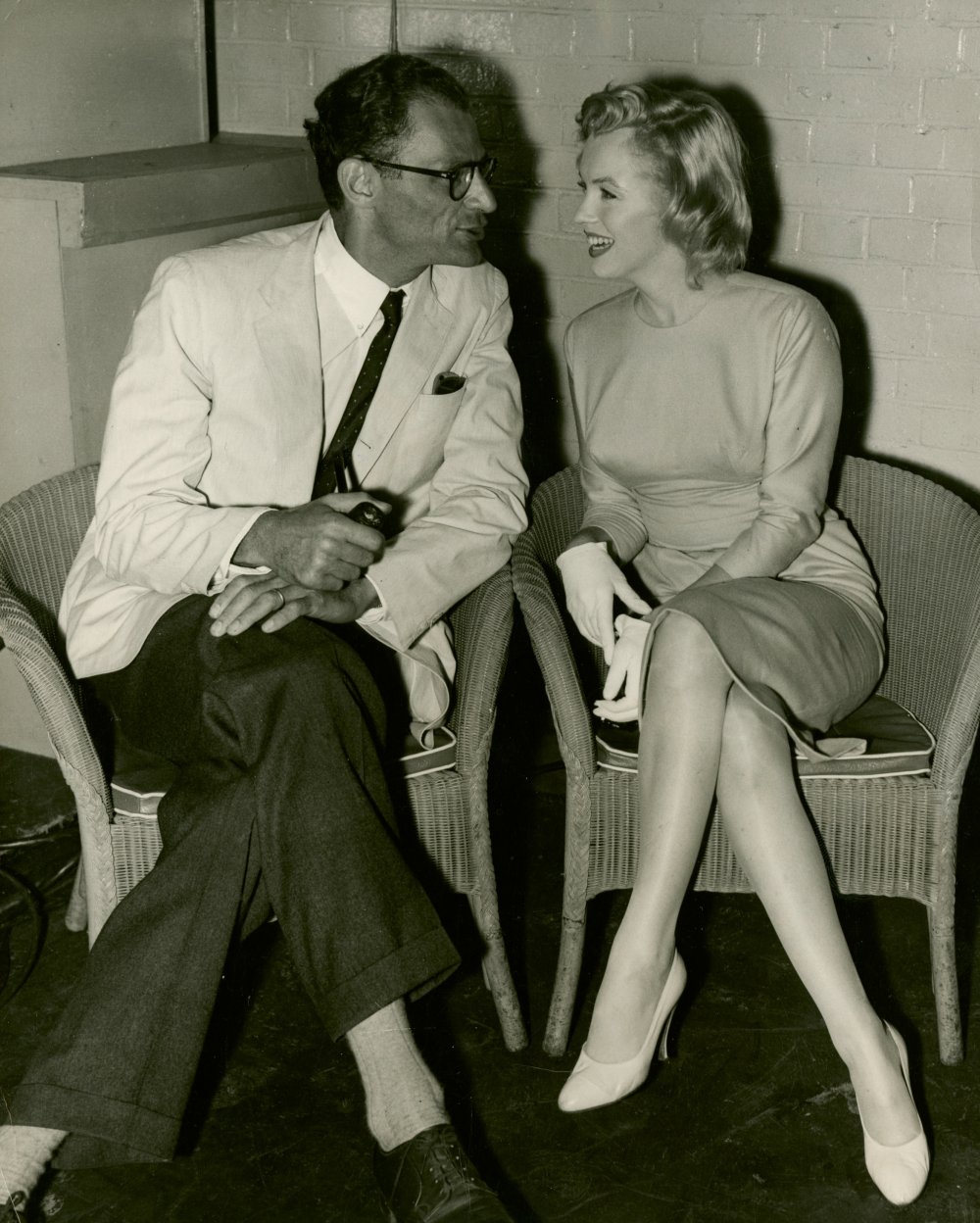 These are distinct from promotional stills, in that they are not deliberate image-shaping photographs. Generally, when the press found out about something newsworthy, such as Marilyn travelling to a film destination, they would send a photographer from a news agency. Marilyn received a lot of publicity: aside from her own stardom, she was married to Joe DiMaggio, who played major league baseball for the New York Yankees. The press loved to exploit Joe’s jealousy — he disliked some of the publicity Marilyn was accustomed to, and it often affected their relationship. This came to a head during the filming of The Seven Year Itch in 1955, with the memorable scene in which Marilyn stands over a New York subway air vent, watched by a huge crowd of photographers. Once DiMaggio heard about the scene, he flew back to New York to be with his wife. 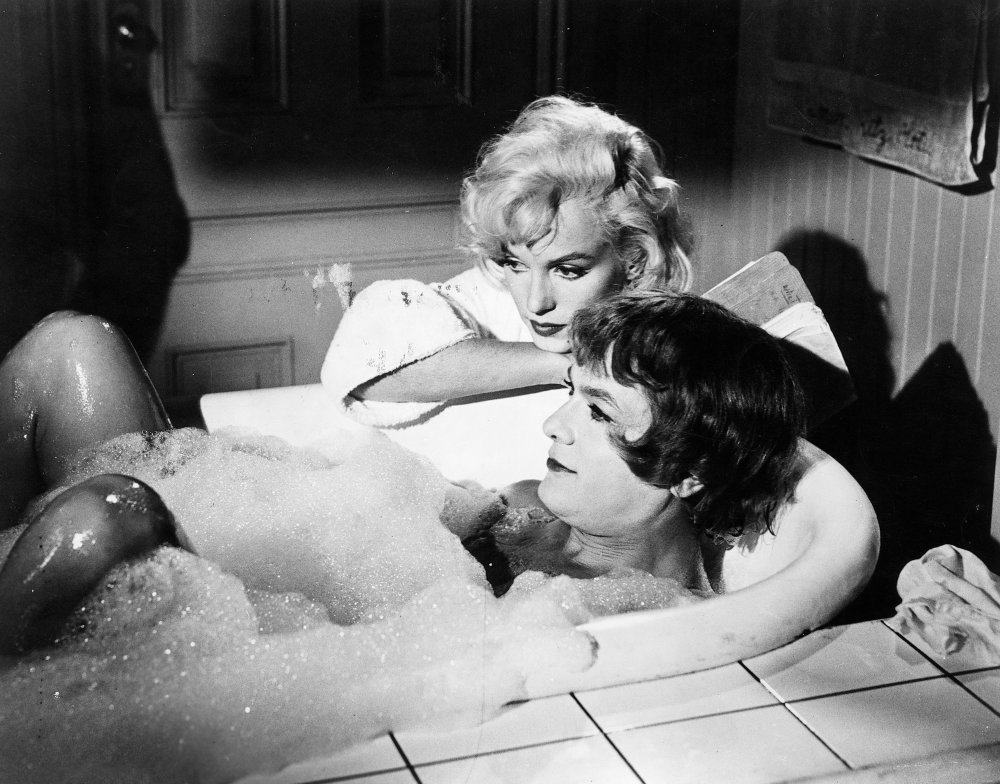 These are stills taken during the film’s production by a set photographer, and are normally created before or after the take, or during rehearsal. These stills are used to sell the film in advertising campaigns and press books. Typically the images depict key moments in the film narrative, and feature the main actors. The images were generally taken in mid-shot using a Rolleiflex camera, with the actors in character. These images were sent to fan magazines, cinemas and fan clubs, and used by distributors and exhibitors to sell the film. 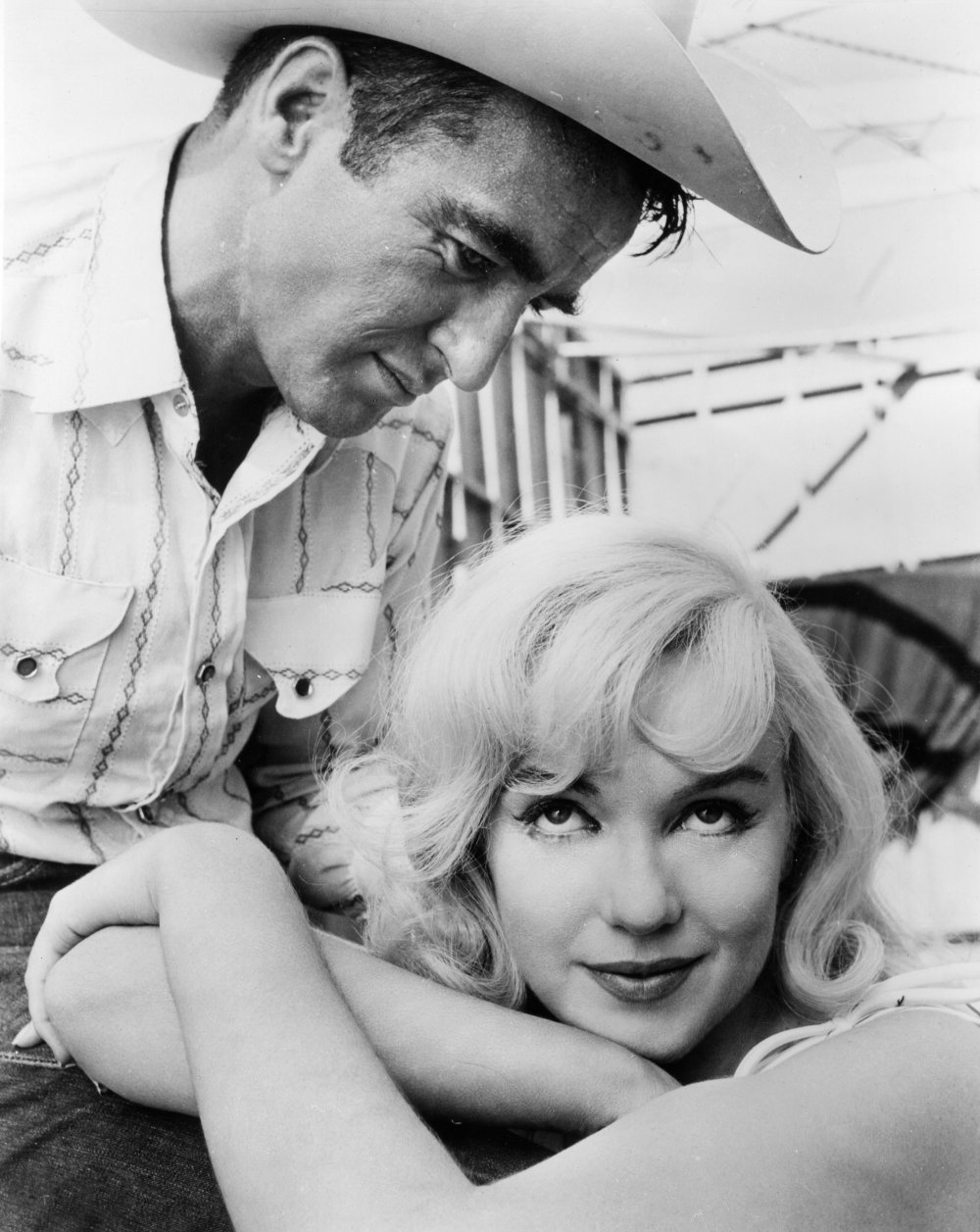 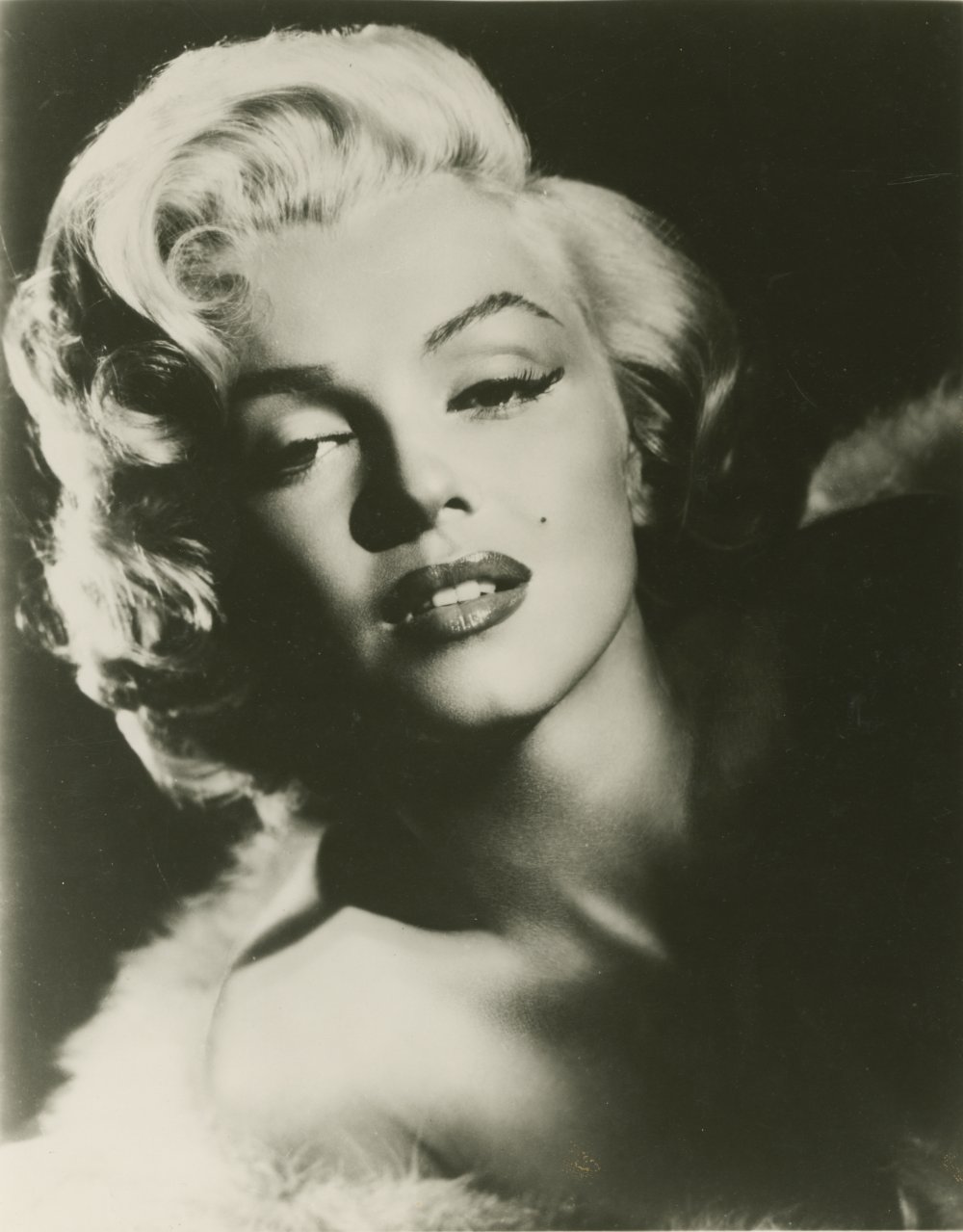 These were extremely expensive to organise and normally took several hours to complete, as the process involved wardrobe, hair and makeup, and extensive experimentation with lights and filters in a studio. These photo shoots were reserved for the New York glamour magazines owned by Condé Nast, who demanded exclusive rights to the picture. More often than not they would send their own photographer, such as Cecil Beaton. In 1956 Beaton famously photographed Marilyn at the Ambassador Hotel, where he had rooms decorated to his own taste, for a session commissioned by Harper’s Bazaar magazine. Beaton’s portraits show a depth and an understanding of her character that reach beyond the superficiality of her public image. The Magnum photo agency, also based in New York, was equally prestigious, and was given exclusive access during the filming of The Misfits (1961) in Nevada. These iconic images included Marilyn with other members of the cast, including Montgomery Clift and Clark Gable. Behind the scenes photograph of Marilyn Monroe by Eve Arnold, August 1955

Marilyn loved Santa Monica, and was often photographed on the beach. One of her most famous photo sessions was by George Barris, who photographed her just before her death in 1962. They show a playful Marilyn in a bikini as she poses and splashes in the water. Other photos from this session were released some years later. Eve Arnold was also able to capture a more intimate glimpse of Marilyn. As legend has it, Marilyn phoned Eve in the middle of the night to ask if she would like to accompany her to Illinois, where the star was going to give a speech on Abraham Lincoln. They flew out to Chicago together, and Eve spent several hours with Monroe in a hotel. The result is a lonely Marilyn reflected in a bathroom mirror during makeup. It’s a fitting reminder that her stardom came at considerable personal cost.

Related to Marilyn Monroe: a life in portraits