The lido that London forgot

Heatwaves, poolside smoking and bold fashion choices… These films show how the men and women of the 1920s revelled in the hedonistic pleasures of an outdoor swim at Chiswick Baths, an early London lido that’s now forever lost to us. 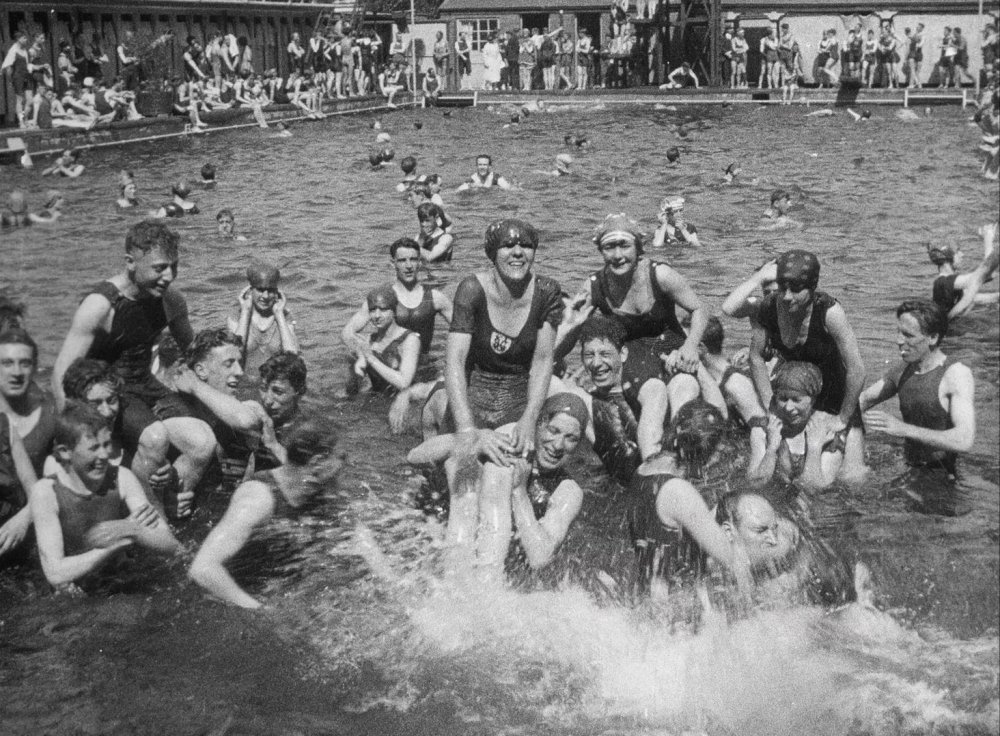 It’s almost 80 years since the London County Council’s Herbert Morrison christened the capital a “city of lidos”. Since then, the fortunes of our once-cherished urban oases have waxed and waned, with many facing dereliction and closure, while a lucky few enjoy rediscovery and reinvestment. But with the Kings Cross Pond – surely the city’s first art installation/swimming pool hybrid – opening to much acclaim this summer, and talks of a new Thames Bath surfacing at Victoria Embankment, is London’s lido love diving to new depths? 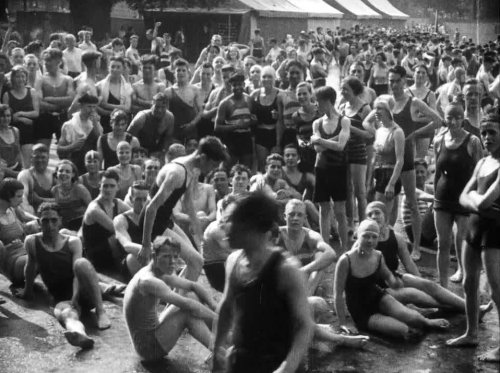 Time will tell if these new schemes can recapture the spirit of their predecessors. In the meantime, I’m revisiting one of London’s older al fresco swimming pools, the Chiswick Baths – now lost and redeveloped as an indoor pool on the same site, but remarkably well-preserved on film, thanks to Topical Budget, the ‘Great British Newsreel’ of the 1910s and 20s, and the BFI National Archive.

The Chiswick Baths were opened on Edensor Road in 1910, a council initiative whose chief aim was to create work for the unemployed. These early Edwardian baths predate Britain’s lido craze by two decades (borrowed from Italian, the term ‘lido’ doesn’t seem to have been used in Britain until the 1930s). But with their innovative architecture – including the double-decker changing cabins – and risqué mixed bathing sessions, this watery west London meeting place was a prototype for the classic art deco lidos, promoting freedom, frolicking and fun.

In the 20s, the newsreels were out to capture a new mood of optimism, as the stiff social codes of previous years began to ease, along with the pressures of wartime. Topical Budget visited the baths umpteen times during the decade, reporting on stints of freakishly warm weather, swimming competitions, or simply the start of the bathing season. And no matter what doom and gloom was going on elsewhere in the country, the flighty, sprightly, bright young bathers of Chiswick’s “inland seaside” could be found embracing a sense of gay abandon. 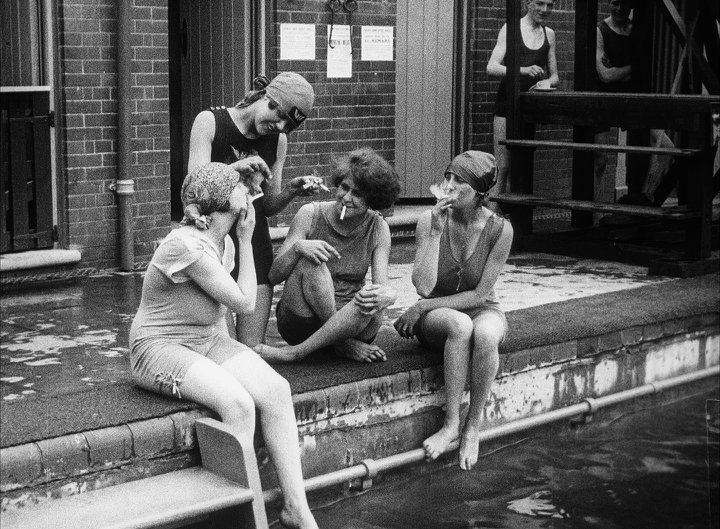 Take No Coal Wanted Here (1921). With Britain facing a national coal crisis after the war, Topical made no apologies for eschewing images of striking miners and misery, in favour of a splendid portrait of four swim-suited young women, nonchalantly puffing on cigarettes, toes dragging idly in the water. It’s a jarring image today, with swimming so synonymous with healthy lifestyle choices, but smoking was evidently a popular poolside activity, as much part-and-parcel of the lido experience as splashing around, diving, skipping, playing leap-frog and generally having a good time. And all without a lifeguard in sight (see also Sudden Heat Wave (1922) and Middlesex – Merry Mermaids (1926)).

Smoking in public, for women (much like applying make-up), was a badge of increasing social freedom – another nod towards emancipation which the lido permitted (if not promoted?), along with spontaneous freedom of movement and interaction between the sexes. In fact, these films reveal an open-mindedness about pleasure seeking which, at times, borders on giddy recklessness. In Summer Arrives – When It’s Nearly Autumn (1924), a chaotic assortment of bodies hurl themselves higgledy-piggledy from the high dive, hold a tug of war, and somersault into the pool like there’s no tomorrow. Scenes of rule-breaking abound… if the pool ever had any rules, that is?

Summer Comes In with a Splash! (1925) spotlights a gang of good-time girls – clad in a surprisingly provocative ensemble of swimwear and leather biking gear – who arrive at the pool by motorbike, limbs trailing languorously from their sidecar. It’s a fun, if fairly innocuous image today, but I wonder if it prompted a few raised eyebrows on release? Topical Budget would have been only too happy to cash in on any controversy surrounding women’s bodies and behaviour in a decade in which gender rules were flouted and boundaries pushed (watch 1928’s See-saw Cycling for more on women’s motorcycling).

Middlesex – Merry Mermaids (1926) captures a mischievous, all-female swimming troupe colonising the pool in a spirit of solidarity, before throwing a male clown into the water and posing triumphantly. It’s a great film, bursting with exuberant, positive images, though you might detect the whiff of exploitation as the women pile up like so many Busby Berkeley babes.

The camera’s ogling is more obvious in Bathing Fashions (1922), meanwhile, as young flapper types model “this season’s toilettes for the seaside which water cannot spoil” – including kimono-style gowns, parasols and an extremely elaborate swim hat! Such spectacles were part of the lido’s repertoire of democratic entertainments, including gala days and competitions, which the newsreels fully supported (and sometimes sponsored), as in Channel Swimmers in a Bath (1923).

Fast-forward a few years to 1930 when a happily-timed heatwave graced the opening of London’s hottest new attraction: the brand-new swimming hole at Hyde Park. Often cited as Britain’s first lido, this fenced-off portion of the Serpentine was known at the time as ‘Lansbury’s Lido’, after the Labour government’s Commissioner of Works and popular socialist George Lansbury. Topical Budget got in on the action with In the Heat of the Moment (1930), showing Mr Lansbury himself admiring his handiwork amid swarms of appreciative, cheering bathers.