Moving images across borders and boundaries: Experimental film at the LFF

LFF Programme Advisor Sarah Perks highlights how a rich sense of different places around the world underpins the Experimenta strand at this year’s Festival. 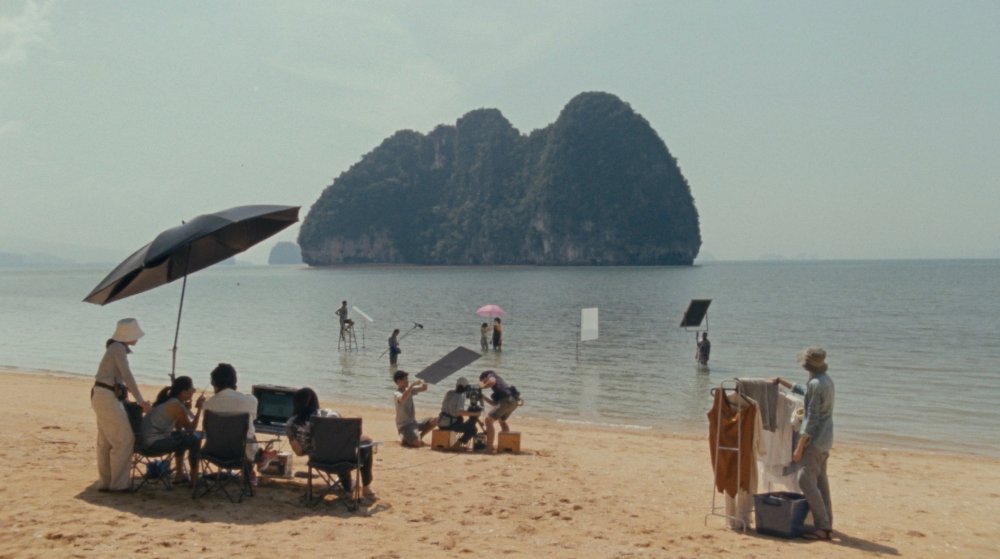 This year’s Experimenta stretches out from London across the globe to present stories from all corners, many from artists and filmmakers based internationally. The programme is full of films that delve into far-flung locales both known and unknown, also looking at how people have moved to, connected with and exploited these places.

Here’s a trip around some of the diverse destinations ahead of us.

Artist Farah Al Qasimi grew up in Abu Dhabi and, although she’s now based in Brooklyn, her multimedia practice is all about her home country, the United Arab Emirates. Made for her first major US solo exhibition at MIT List Center in Cambridge, Mother of Fire (Um Al Naar) is a new medium-length video that receives its first film festival outing at Experimenta. The title refers to a jinn who is narrating her story of developments witnessed in the UAE since its formation in 1971. Farah’s work is mischievous, colourful and multi-layered, adopting reality TV and ghost story tropes while being an intelligent essay on colonial legacy and the complex roles of Emirati women.

Watch the trailer for Mother of Fire

Another unmissable take on shifting international relationships is Hand in Hand by award-winning Singaporean artist Ming Wong, based in Berlin and known for lavishly queer installations recreating classic film scenes. His latest brings an ethnographic eye to observe the recent impact of China’s investment in Senegal. Ming uses stories from a Chinese language class of local students in Dakar, and visits the Museum of Black Civilisations, recently paid for and built by the Chinese though originally conceived by Senegal’s first president as a powerful symbol of decolonisation more than half a century ago.

Watch a clip from Hand in Hand

Similarly based in Hong Kong is Indonesian artist Riar Rizaldi, whose film Kasiterit is in the What Remains shorts programme. Riar researched and filmed the fascinating journey of tin on the small island of Bangka in the Indonesian archipelago, which exports one third of the global supply. It’s very likely there is tin from Bangka in the screen that you are reading this on. Riar’s film explains the impact on the island’s inhabitants and environment, all told via a solar powered AI called Natasha.

Watch a teaser for Kasiterit

Experimenta’s Special Presentation, Krabi, 2562, is a feature-length film that also privileges an artist view of the effect of industry on a tropical locale. Co-directors Anocha Suwichakornpong and Ben Rivers initially conceived their project for the first Thailand Biennial last year, focusing on tourism in Krabi in southern Thailand. Poetic portraits of visitors and locals combine to create a hauntingly beautiful meditation on place.

In the extreme opposite climate of the Antarctica, Austrian filmmaker Michaela Grill compiles literary sources and imagery of the south Georgia coast to explore the deadly human impact and legacy of the history of whaling and sealing in Antarctic Traces, also in the What Remains programme.

Watch a clip from Antarctic Traces

Work-in-progress feature Ouvertures is a translation – literally and metaphorically – of Édouard Glissant’s play Monsieur Toussaint. The Living and the Dead Ensemble are a collective of Haitian, UK and French artists documenting the issues of putting the play into Creole for an unseen-on-screen performance at the Ghetto Biennial in Port-au-Prince, while dealing with the legacy of Toussaint L’Ouverture, the first leader of the Haitian Revolution.

Over in the Strategies of Refusal shorts programme, Ghanian-American filmmaker Akosua Adoma Owusu has a nine-minute Super-8 montage inspired by another historical figure, W.E.B. Du Bois, an African-American author-activist writing a letter to the Brazilian embassy in Washington in 1927 about unfair restrictions to travel there. In Pelourinho, They Don’t Really Care About Us, this is juxtaposed with another African-American, Michael Jackson, receiving a very different welcome in Brazil years later, when he filmed his Spike Lee-directed music video in the poor suburb of Pelourinho in the Bahia city of Salvador.

State violence and patriarchal oppression are confronted in Ruptures, a feature that goes far beyond the real-life events of a car crash in Turkey that revealed the shocking extent of political corruption in 1996. Co-directed by artists Noorafshan Mirza and Brad Butler, the film was developed and written by them through creative ‘revolutionary’ workshops in both London and Istanbul with invited global thinkers. The absorbing three-part film also incorporates performances inspired by real-life ‘resistant dead’ – the lingering residual movements from people’s stories that refuse to be hidden.

Watch the trailer for Ruptures

In 1980s and 90s Pakistan, bootleg VHS brought western pop culture and underground filmmaking as a form of queering alternative to the hardline nationalism of state TV. Born in Pakistan, artist and curator Sharlene Bamboat lives and works in Toronto and Montreal. Her stunning short video essay Video Home System (in the Double Vision shorts programme) merges archive analysis of this smuggled culture with live action, providing a reminder of the importance of research into the circulation of moving image culture across and beyond borders.