Steven Spielberg called Akira Kurosawa ‘the pictorial Shakespeare of our time’, but what makes the Japanese master’s Shakespeare films so special? 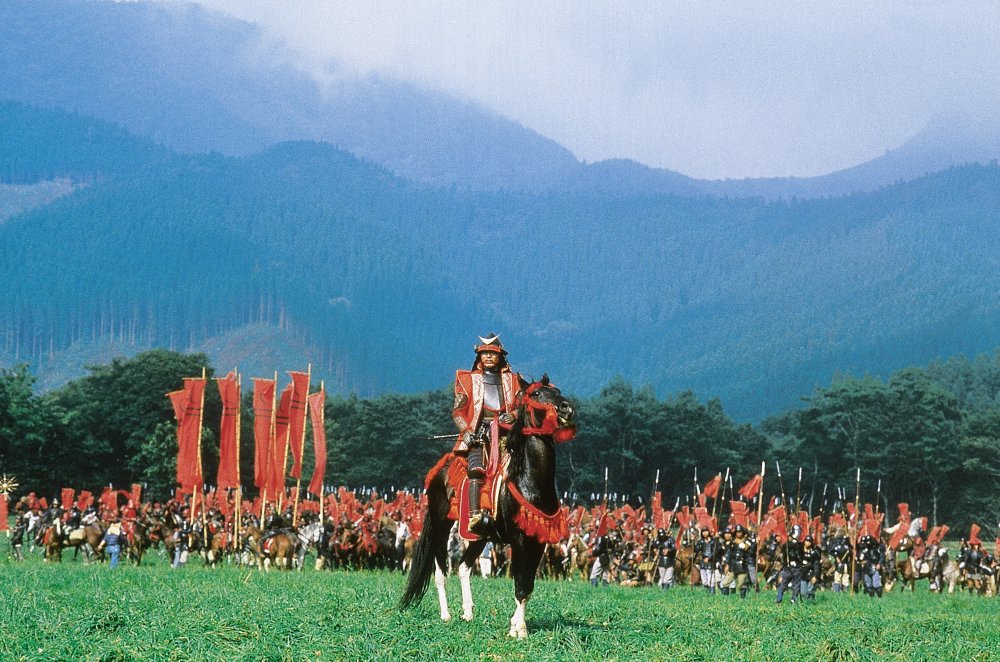 The new 4K digital restoration of Ran is in cinemas, including BFI Southbank, from 1 April.

A celebration of Shakespeare on Film runs at BFI Southbank throughout April.

Akira Kurosawa was a defining figure in the cinematic intercultural exchange between postwar Japan and the west. Despite being held up by those outside Japan as the foremost exponent of Japanese cinema, he was decried as too western by detractors at home and would not have been considered representative of the domestic milieu. Yet, he still imbued his work with local theatrical tradition and is probably the greatest filmmaker in the samurai genre. He even once told devoted Japanese film scholar Donald Richie: “I find a western-looking format most practical, but I really only make my pictures for young Japanese in their 20s.” 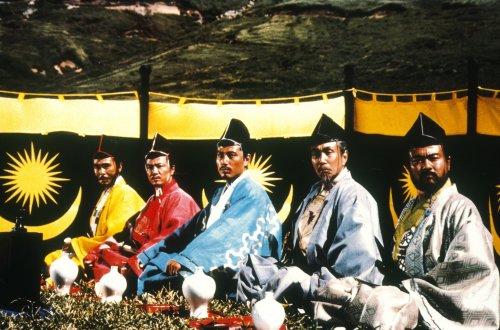 His relationship with European and North American film was most evident – and most enduringly famous – in the cyclical inspiration that formed between his samurai films and Italian and American cowboy flicks. However, Kurosawa’s own influences were not purely found in movie theatres but on stages, canvases and in books. “I read classics and contemporary, foreign and Japanese literature without discrimination,” he recalled in his autobiography and such foreign classics were to emerge in the particular form of William Shakespeare.

Steven Spielberg once described Kurosawa as “the pictorial Shakespeare of our time” and he adapted the Bard for the screen, and into contemporary and period Japanese settings, on three occasions. First he transposed Macbeth into feudal Japan in Throne of Blood (1957), then examined the rotten postwar state of his nation taking Hamlet as the inspiration for The Bad Sleep Well (1960). Finally, he adapted King Lear into the glorious jidaigeki [period] epic and his final masterpiece, Ran (1985).

Throne of Blood has been described as a prime example of a cross-cultural artwork in its interpolation of English Renaissance and Noh theatre. Long before any actors have appeared on the screen in Throne of Blood, the atmosphere of a Noh play has been intimated by the slow beat and high-pitched piping of Masaru Sato’s music. The Noh form of masked musical drama was performed in Japan as early as the 14th century, and Kurosawa channels it most evidently in this film as he plunges the scenario of the Scottish play into a stylised world of warring barons and forest demons. 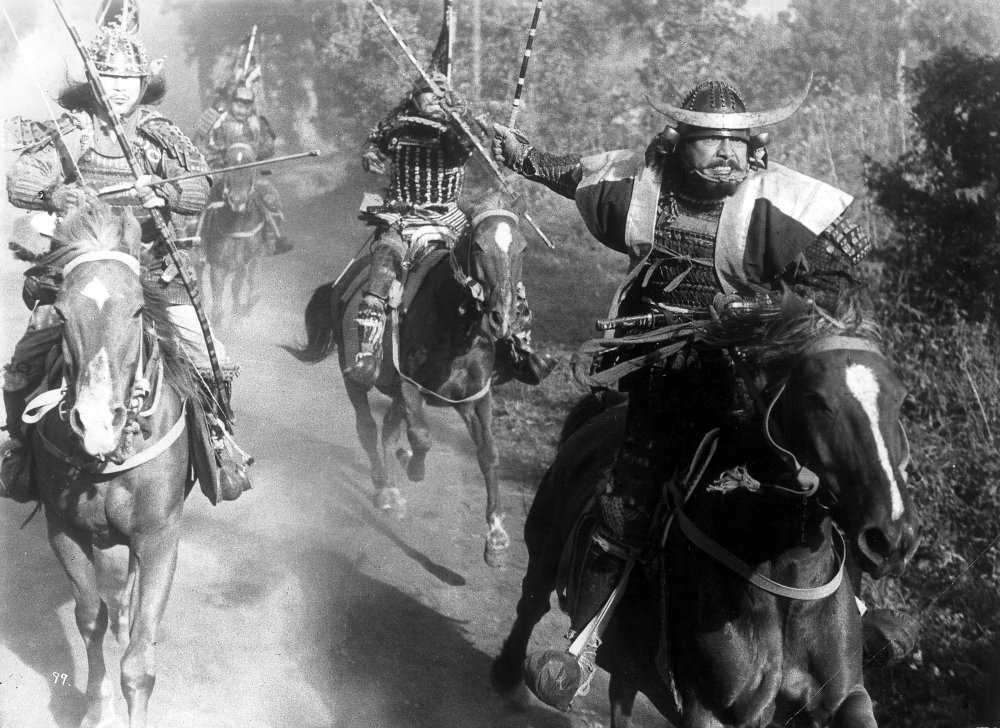 Washizu (a typically electric Toshiro Mifune) plays the Macbeth role. Honoured by his lord after a decisive battle, he is prophesied to one day become lord himself. The sense of doom is palpable as fog drifts ominously across the screen (perhaps itself inspiring the mists of Justin Kurzel’s 2015 iteration, Macbeth) – Kurosawa is almost unparalleled in his use of the weather.

However, as Erin Suzuki wonderfully articulates in her essay ‘Lost in Translation: Reconsidering Shakespeare’s Macbeth and Kurosawa’s Throne of Blood’, where Shakespeare’s Macbeth commits a terrible transgression by murdering Duncan, Washizu could be considered to be conforming rather than rebelling. He is following in the footsteps of his lord – who also rose to power by killing his predecessor – and submitting to the fate foretold by the witch and the demands of Shakespeare’s narrative.

As he does, he seems to further become the Noh archetype of Heida, the warrior, accompanied by the woman on the brink of madness in his Lady Macbeth, Asaji (Isuzu Yamada). Both characters starkly resemble the Noh masks of their respective roles.

It is also a far more thorny proposition when classifying it as a direct Shakespeare adaptation than either Throne of Blood or Ran. Commentators have argued that it merely shares common elements with Hamlet, with some even going as far as to say that the figure of Nishi, played by Toshiro Mifune – a son seeking vengeance against those responsible for his father’s death – is the only real correlation between the two works. 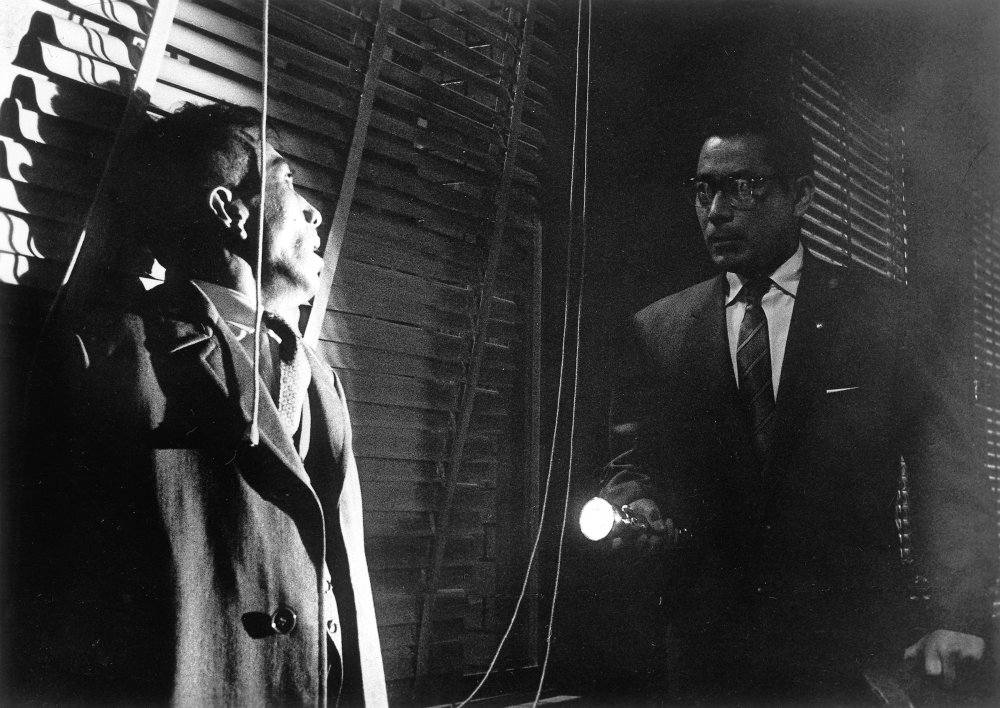 It is true that in this instance, Kurosawa plays with Shakespeare’s text far more freely than in the other two films, and he marginalises the play’s philosophical and psychoanalytical elements in favour of typical genre tropes. These imbue the narrative with a noirish tone, with plot elements such as double-crosses and grifting serving his purpose of social commentary against endemic greed and corruption.

Despite this, some of the most memorable aspects of the film are the ways in which he does repurpose the text, particularly in instances such as Nishi faking the character of the ghost – this time a living man believed to be dead – to haunt those guilty of colluding in his father’s ‘suicide’.

The film’s bravura opening sequence is a fabulously choreographed wedding which lasts for 20 minutes and refashions the play-within-a-play of Act III, Scene ii into a spellbindingly tense prelude climaxing with, of all things, an elaborate and ominous wedding cake.

Sharing far more commonality with Throne of Blood, Ran takes Shakespeare as scenarist for a tale of samurai-era warfare in which Kurosawa opts to convey the story with images rather than the eloquent language of its original form. 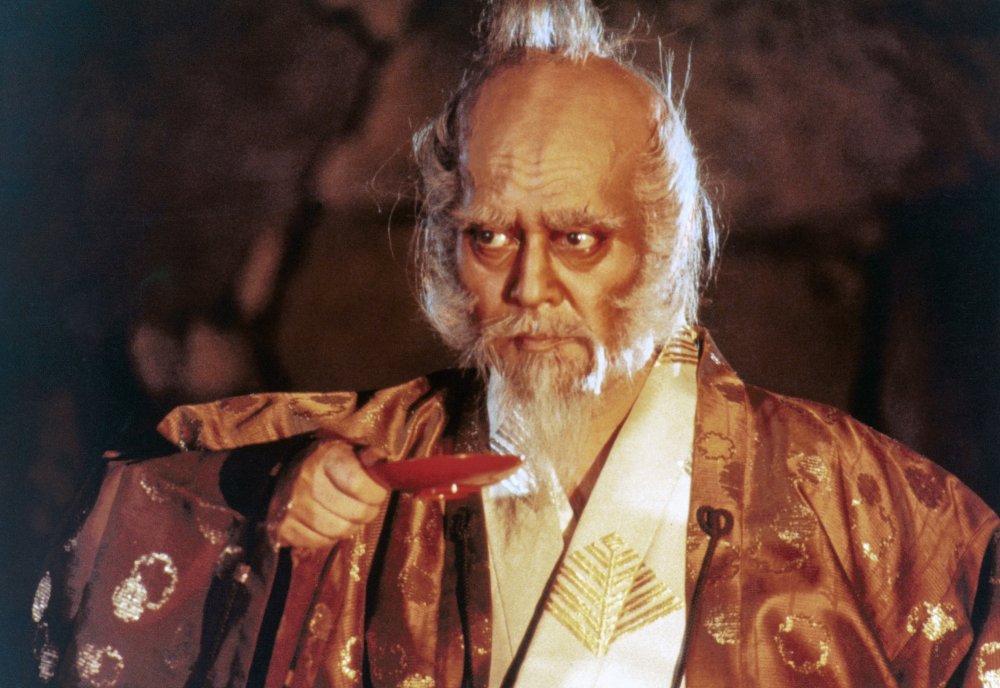 It has often been noted that the test that King Lear challenges his daughters to – in which they must linguistically proffer their eternal love to him – is replaced in Ran by a physical challenge. Lord Hidetora asks his sons to break a bundle of arrows, hoping to illustrate their combined strength and avoid internal conflict when he divides up his kingdom between his boys.

Tatsuya Nakadai’s performance as Hidetora is equally as impressive in its physicality while eschewing dialogue. “I have full cause of weeping, but this heart / Shall break into a hundred thousand flaws, / Or ere I’ll weep.—O Fool, I shall go mad!” lamented Lear. Despair and wounded pride are measured in the arch of Nakadai’s back; he staggers at every betrayal like an arrow to the heart; his tragedy lays him as low as his nobility stands him high.

Kurosawa returns to the tension between western naturalism and Noh to express Hidetora’s spiral into madness. His makeup gradually thickens and becomes more stylised to recall the recognisable motifs of the theatre as he is beset by peril and when he reaches his apparent nadir amid the incredible battle scene on the slopes of Mount Fuji. When he emerges from the burning fortress having failed to commit harakiri, his face is set in a rigid Noh mask of insanity. As he roams the wastelands in the driving wind and rain, he acts as a near perfect illustration of Kurosawa’s brilliantly cinematic relationship with Shakespeare and the reason behind his comparison to him. 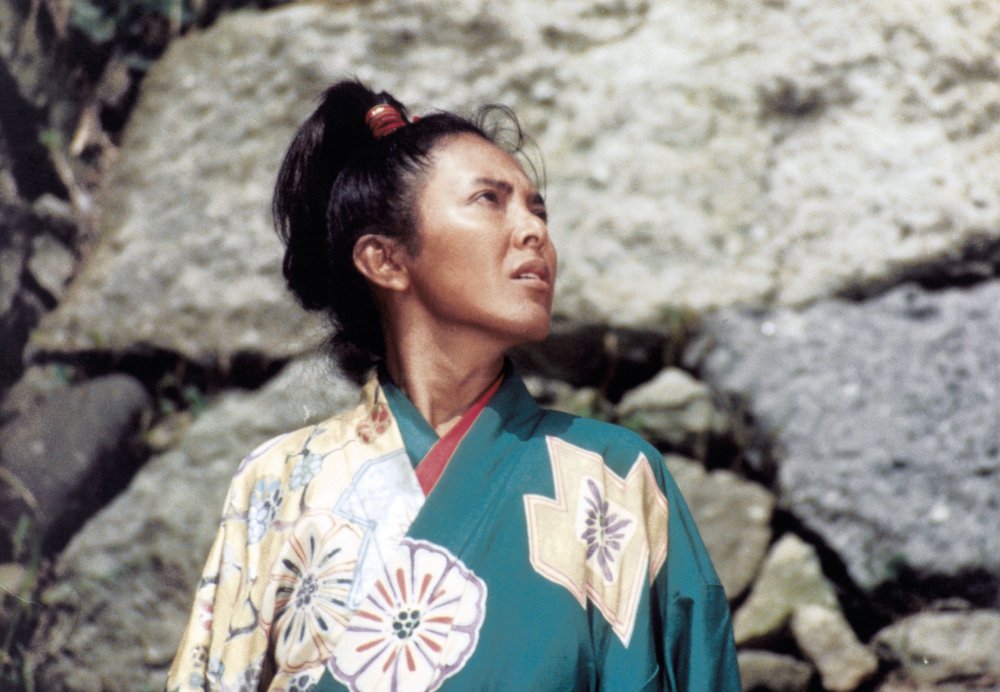 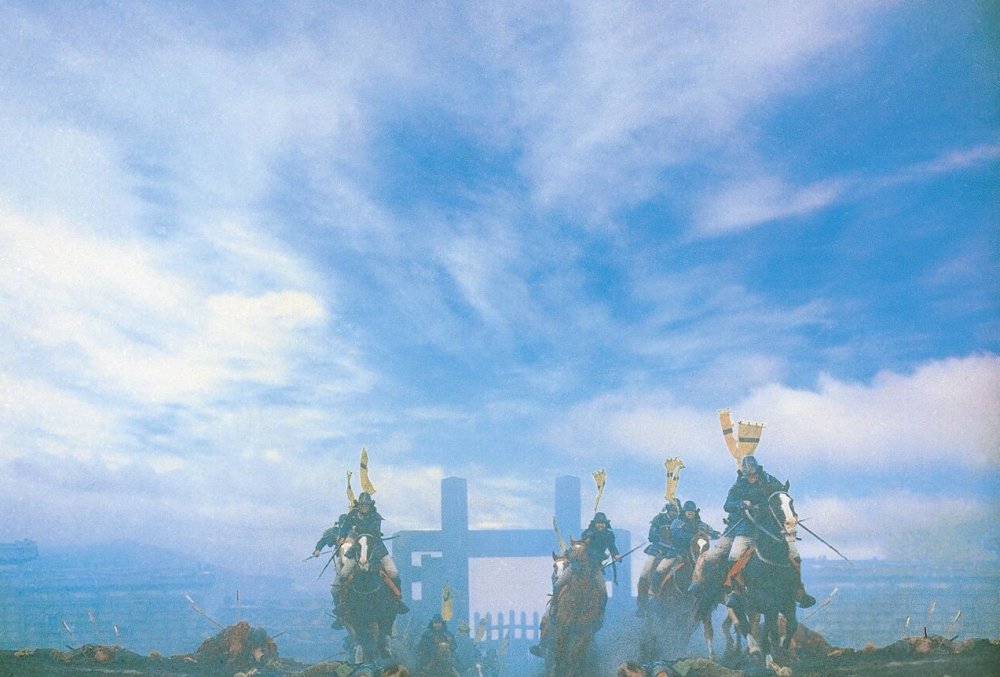 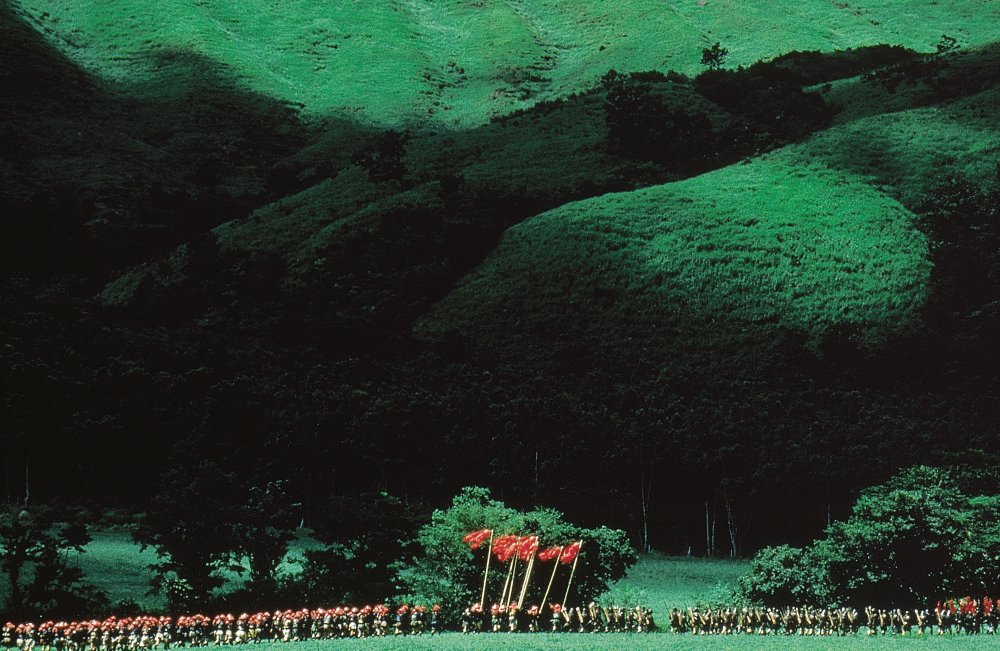 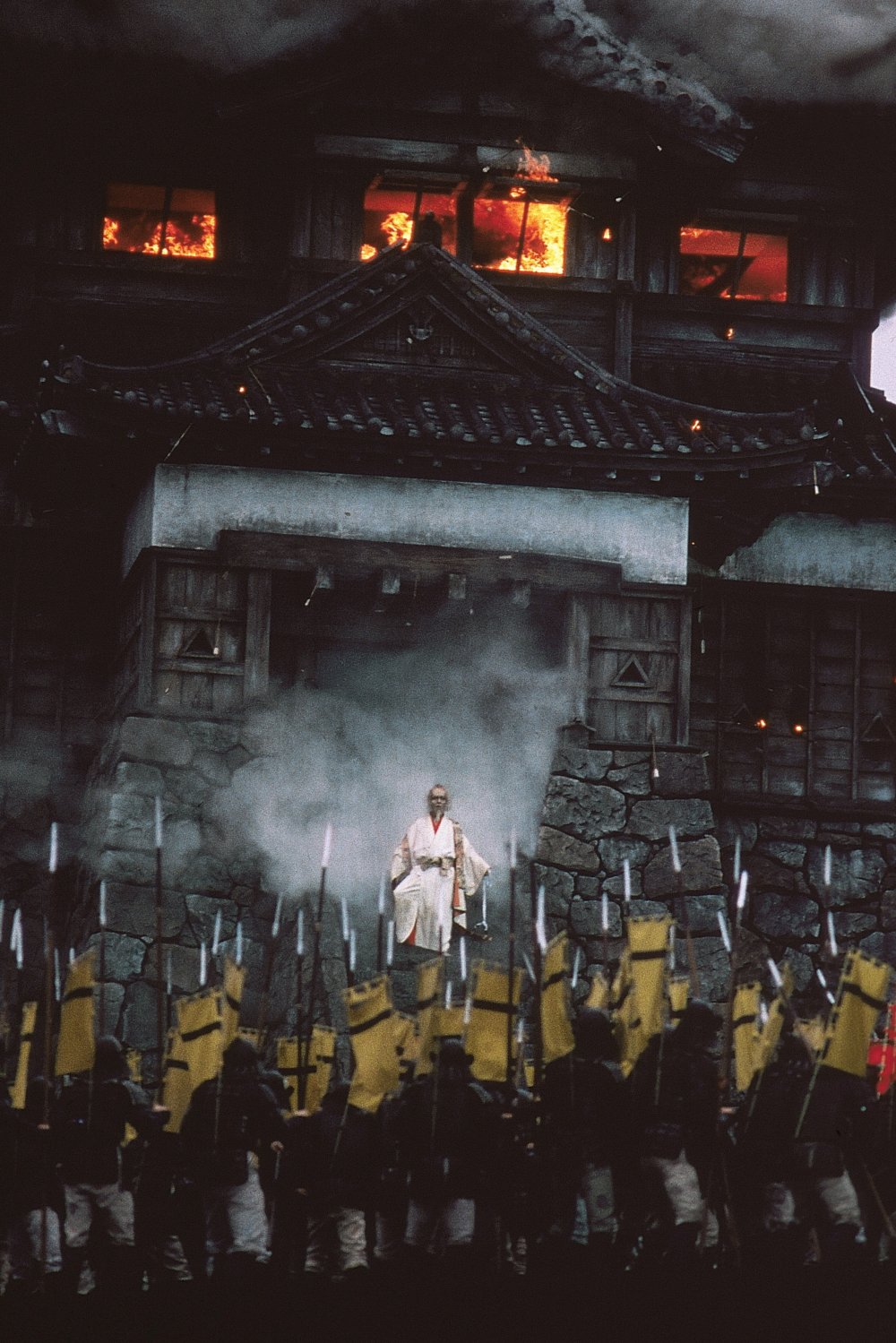