The joys of archival discovery: The Battles of Coronel and Falkland Islands

Curator of silent film Bryony Dixon shares some exciting discoveries made while researching for the restoration of one of the finest films of the British silent era, tonight’s London Film Festival Archive Gala. 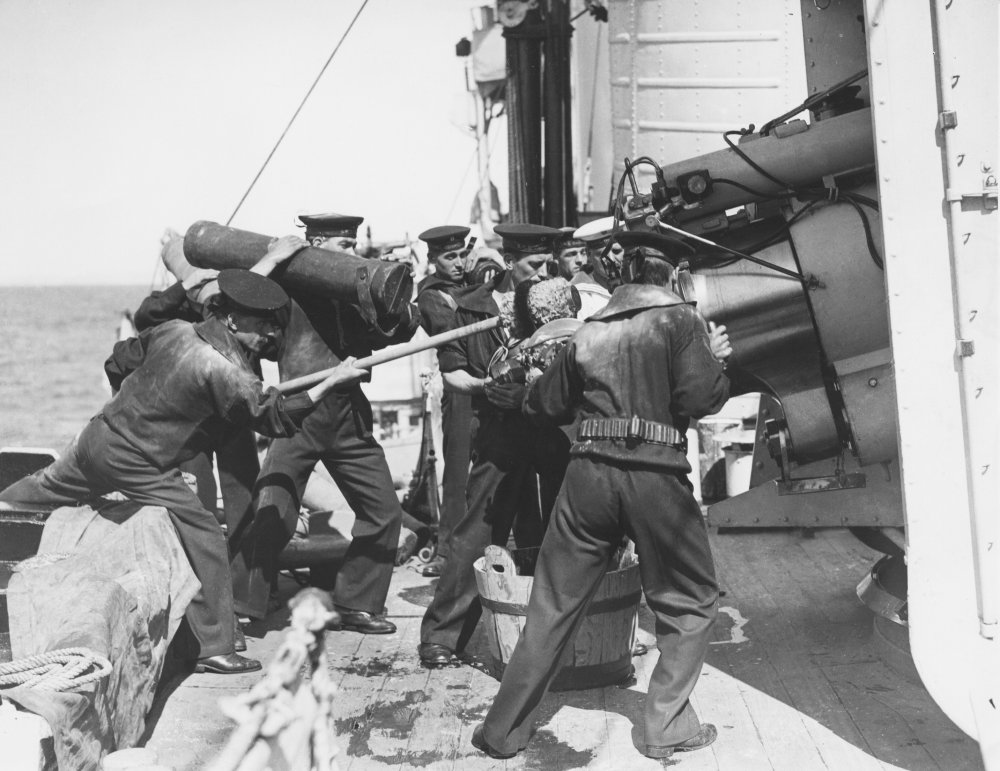 Some of the best things about researching restoration projects is the people and things encountered along the way.

Here are some of my favourites for this year’s BFI National Archive restoration, The Battles of Coronel and Falkland Islands (1927), a dramatic feature film reconstruction of two naval battles fought between Germany and Britain in the early months of the First World War and one of the best silent films ever produced in Britain.

At the beginning of any film restoration you have to immerse yourself in the research – about the production, its context, the people who made it, the locations, the story and, in this case, the real events on which the film is based. The more you get involved the more you get excited about each discovery …

What to do with your parrot when facing a sea battle

Having read several books on the subject and being keen on naval history, I thought I knew more than most about this subject. Then I met Mensun Bound, a marine archaeologist born in the Falkland Islands who knows everything, and I do mean everything. One of my favourites of his anecdotes appears in a diary of the events he is writing about the days leading up to the historical events a century ago, published weekly in the Penguin News, the Falklands Islands’ weekly newspaper. 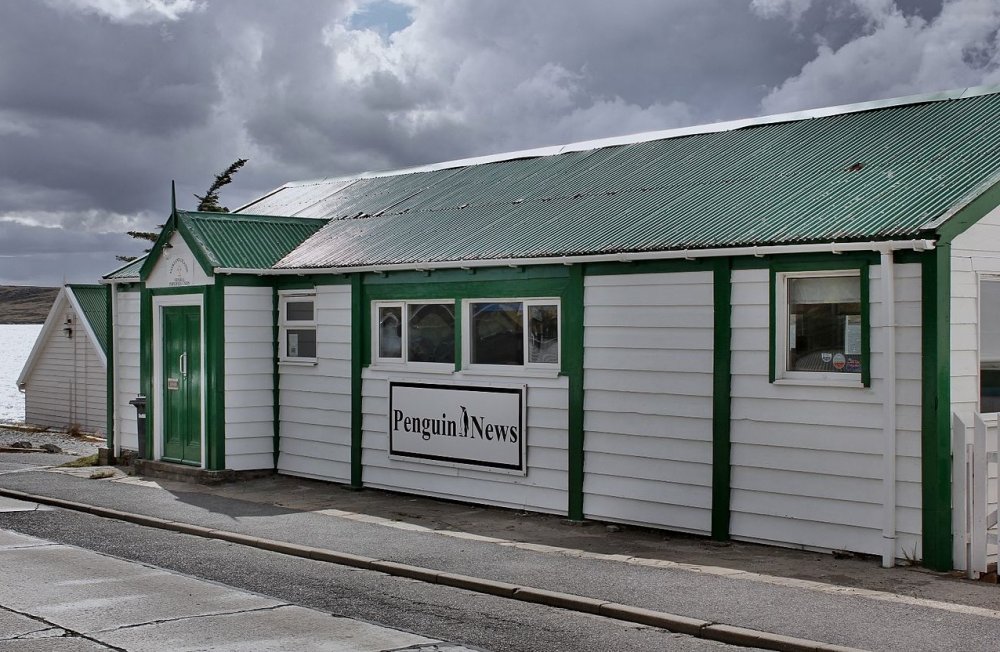 Mensun’s diary of Coronel and Falklands in the Making -

Here he tells the story of HMS Glasgow, the only ship to be present at both battles, preparing for war:

The Glasgow had just completed her second consecutive commission in the South Atlantic and was in Rio preparing to return to England when she was notified of the deteriorating situation between Britain and Germany and that she must make preparations for war.  Immediately she began stripping away the woodwork and disembarking all flammables and superfluous equipment. Comforts, such as the mess room armchairs and even the library, were sent ashore followed by the men’s civilian clothing and unnecessary personal effects. They did, however, keep the piano which was later given to Stanley and survived for many years in the gymnasium where the bank is now situated.

On this day Glasgow received a message from the Admiralty to say that Germany is at war with France and that Britain is likely to become involved. Because the ship had been on the point of returning to England, many of the crew had bought Amazonian parrots to take home as pets. After much discussion it was decided that the birds could stay and even, if necessary, go into battle.

In a clear hand an officer on the bridge wrote in the log: ‘Hands preparing for war’.  There was a keen feeling of excitement throughout the ship, but nobody had any idea that they were on the brink of what Lloyd Hirst, the vessel’s intelligence officer, described as ‘the greatest and most terrible war that history has yet recorded’. 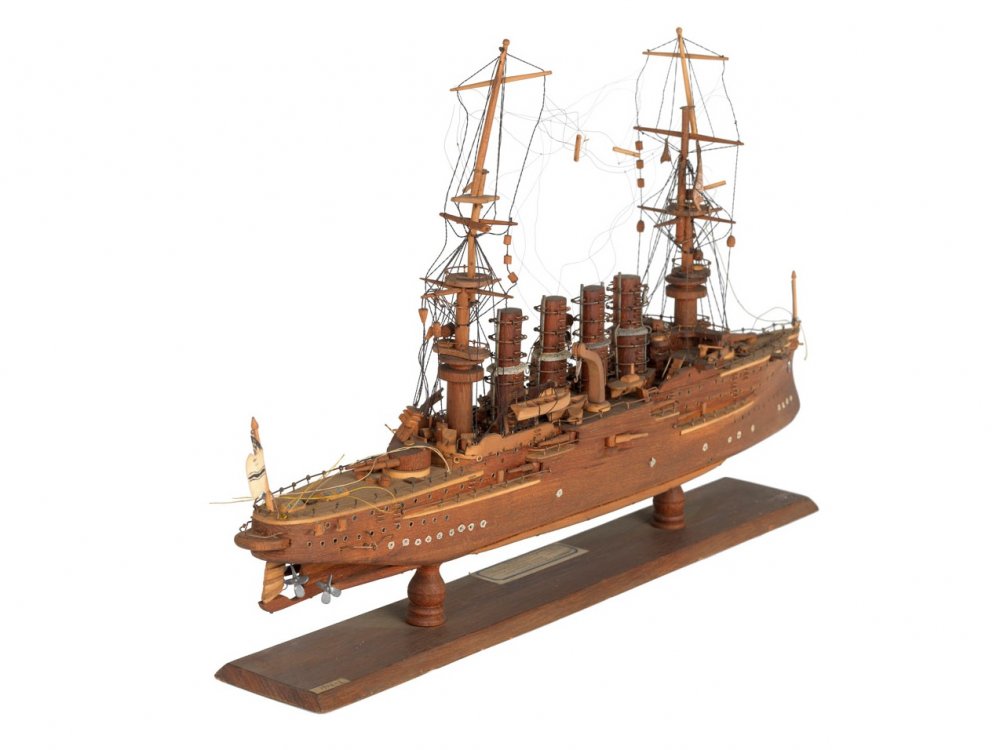 There is a fabulous new exhibition at the National Maritime Museum called Forgotten Fighters about the First World War at sea, curated by Quintin Colville who will be coming to BFI Southbank for a panel event on 24 October. The beautifully designed exhibit tells the story of the war at sea and the men and women who were involved in it through objects, pictures, maps, letters and films. There is a section all about Coronel and Falklands including a chunk of torn metal from the hull of HMS Invincible given to Sturdee to commemorate his great victory. You can see where the shells have pierced the armour plate.

We will be organising an event with the National Maritime Museum in February 2015 to listen to their experts and talk about the film.

The Scillies play the Falklands

While doing an interview for Radio Scilly, I appealed for someone to organise a screening of the film, which was partly filmed in St Mary’s. I had several calls full of enthusiasm for the project so it looks good for next season in the Scillies. The Isles of Scilly Museum holds several production stills from the making of the film and an account of the filming written by M.V. Moyle back in March 1927.

It appears that on the Falklands there was a large and powerful wireless telegraphy station and it was naturally thought the German cruisers prowling about the South Pacific where they were busy sinking British ships – HMS Monmouth amongst the number, you may remember – might slip back round the Horn to destroy it. With the object of preventing this, a Volunteer Defence Corps was raised on the Islands, and from photographs I have seen the men had reached a fairly good standard of efficiency. It seems, too, that some 3” naval guns were put on shore and hauled up and mounted in commanding positions to stop a landing of the enemy …

About 75 men and seven women and girls were taken on for the work (as extras). This afternoon pictures were only taken from the side of Buzza Hill facing the town, and on Porthcressa Bank. Some of the men were rather picturesquely got up … while some of the boys looked really handsome with their well groomed moustaches …

By the steamer that afternoon there arrived a few Actors to join the party. One was a tall handsome elderly man to act the part of the Governor of the islands, Sir Wm. L. Allardyce, whom he very closely resembled in form and features. Then there were a tall man with a beard to personate a junior Officer of the Corps; and a small, old worn out actor to be the village grocer, who seized his gun and left the shop to look after itself when the alarm sounded. There were also a long lanky young fellow, quite 6’6” in height, and a tiny toy-like Sergeant Major who made the air burn blue when licking his men into shape on Parade next morning.

It was a bright beautiful day; the sun shining; and a fresh easterly wind. Picking up the gear a stampede was made for Peninnis, and you can imagine the crowd that followed was somewhat in excess of the number of people who attended Church that morning. The Cameras were soon in position on the North side of and near the Kettle and Pans, and most of the pictures were taken with the Cameras looking towards the Garrison and the Town.” 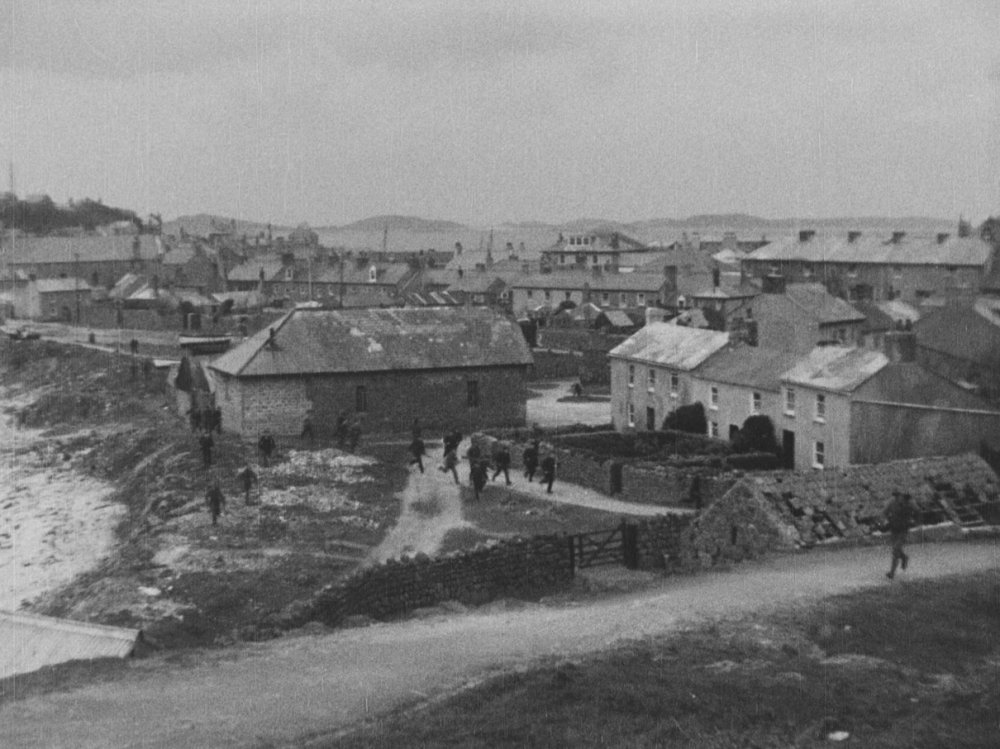 The fabulous shot down through St Mary’s, standing in for Port Stanley, was taken from Buzza Tower, which now has a camera obscura giving a splendid pre-cinema view from this vantage point.

The film was popular and played all around the world. There was even a game you could get free with ‘Chums’ – a boys magazine of the time. The board was printed in the paper, and the tin games pieces of the battleships were given away in successive issues. Mark Connelly, Professor of Modern British History at the University of Kent, who has been doing academic research on The Battles of Coronel and Falkland Islands, alerted me to it. 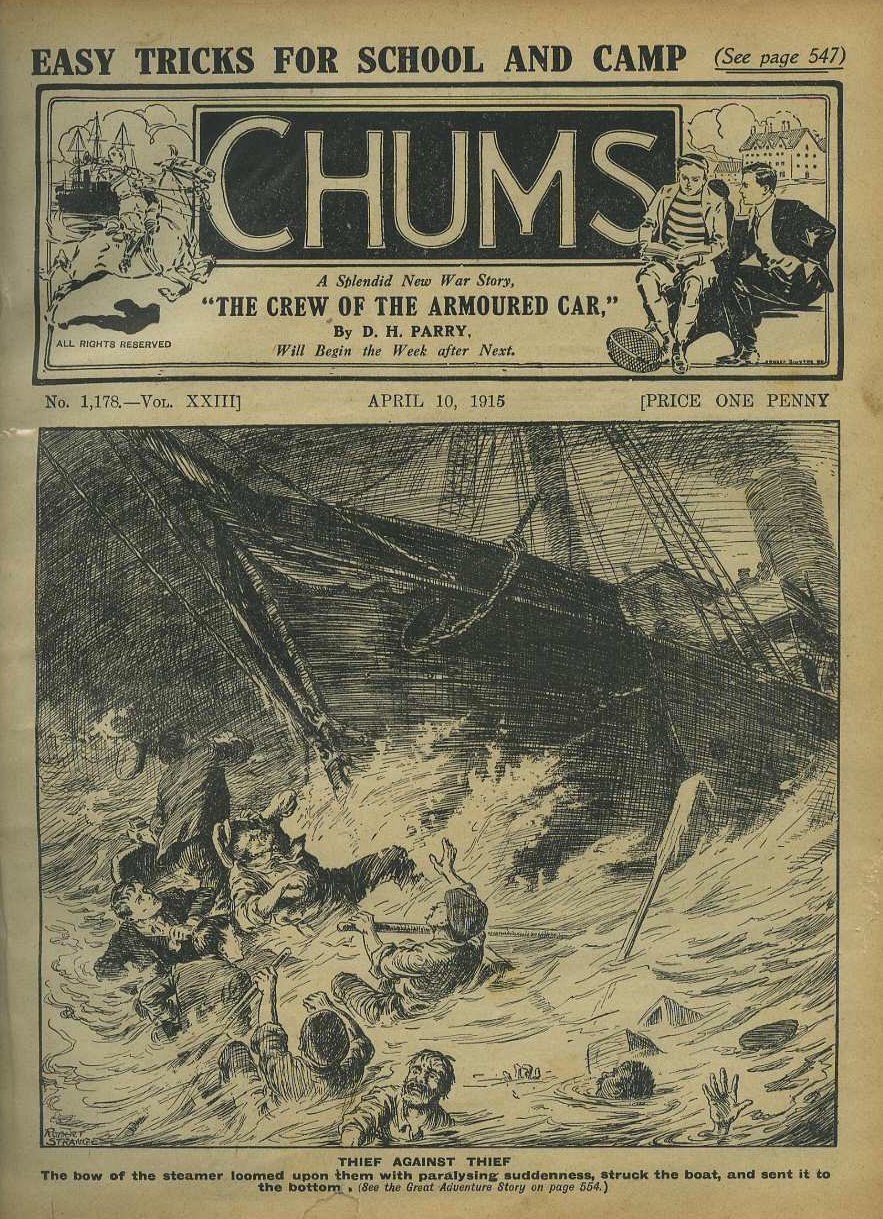 Near contemporary cover of ‘Chums’ paper for boys 1915 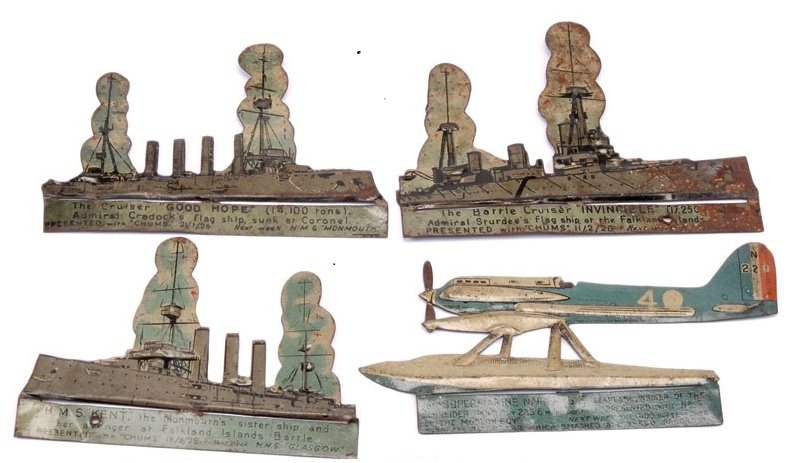 The Imperial War Museum has a set of the pieces and many other artefacts relating to the battles. They also have photographs taken by officers during the sea fight and oral histories from men who were there. This remarkable image was taken from HMS Invincible standing by to pick up survivors from SMS Gneisenau: 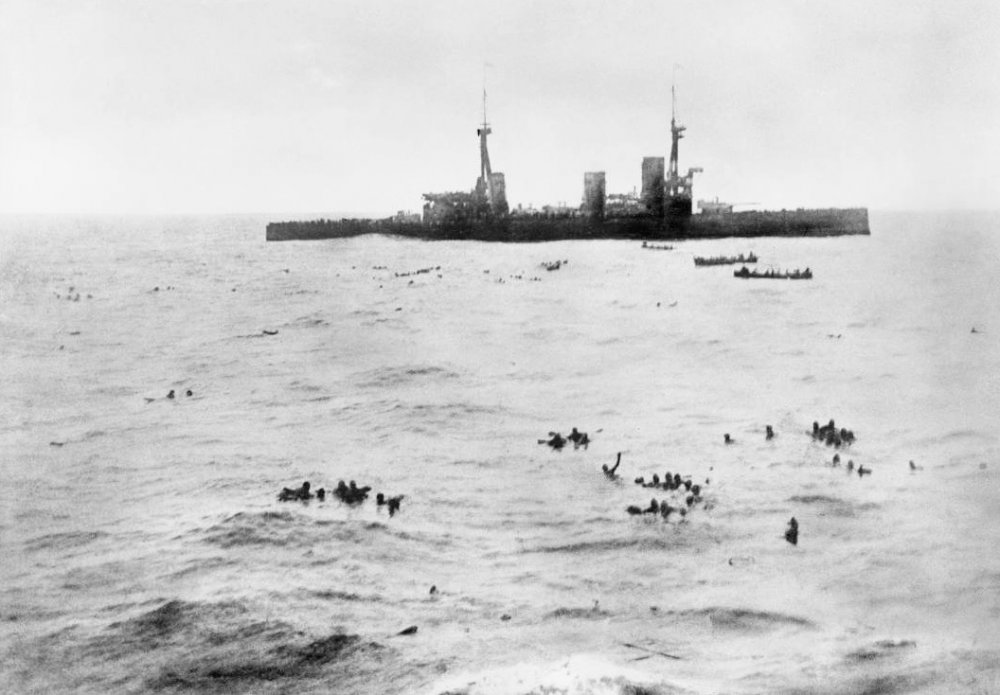 After viewing the Battles of Coronel and Falkland Islands for the 100th time, I spot a familiar face in the crowd. I think this is the director Walter Summers, to the far right of the image below. 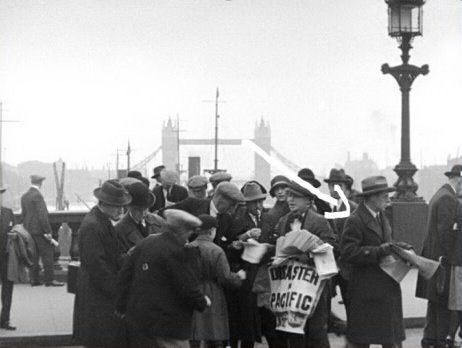 Is this director Walter Summers to the right of the frame making a cameo in the film?

We got used to scrutinising frames looking for any unknown cameos when we restoring the Hitchcock silents. Walter Summers’ son, who also went into the film business, will be attending the premiere – perhaps he can confirm if this is him.

To the far side of the world 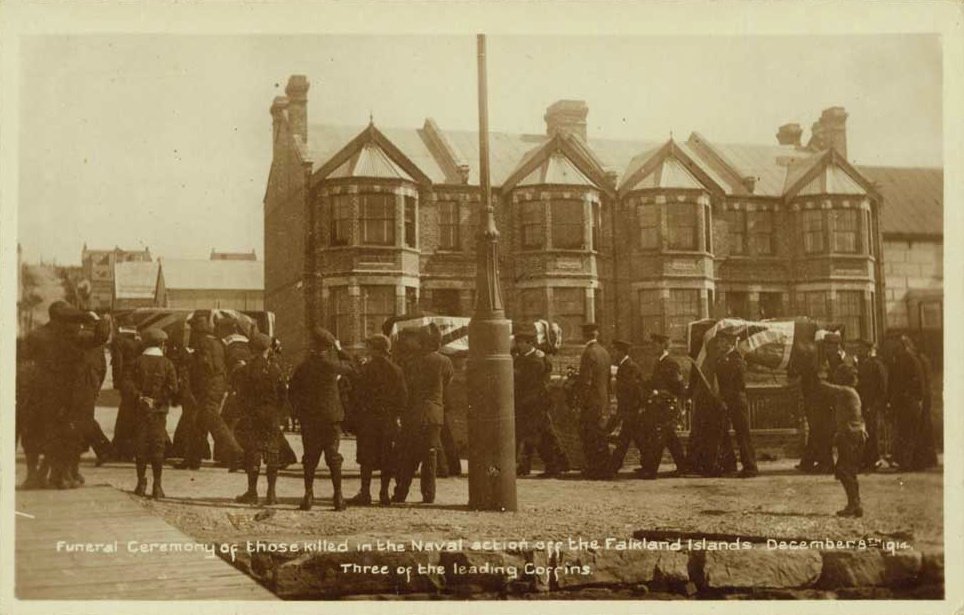 In the past few years the BFI has sent its film restorations far afield: the Hitchcock silents played to a crowd on 15,000 on the Odessa Steps, The Epic of Everest was screened on a plane travelling over the peak itself, The Great White Silence was screened to the South Pole. The Battles of Coronel and Falkland Islands will be screening in Port Stanley in December as part of the centenary to commemorate the battles and the brave part the Islanders played in the events depicted in the film.

A great new piece of research, by Jo Pugh of the National Archives, on Walter Summers’ war record sorts out when and where Walter Summers was born. Here’s his birth certificate:

The big revelation of the article is how much Summers wanted to return to the Army despite a vibrant and busy career in the movie business.