In the early rock ‘n’ roll era, James Dean’s bright flash of three films before his tragic death spoke to an adolescent audience like never before. 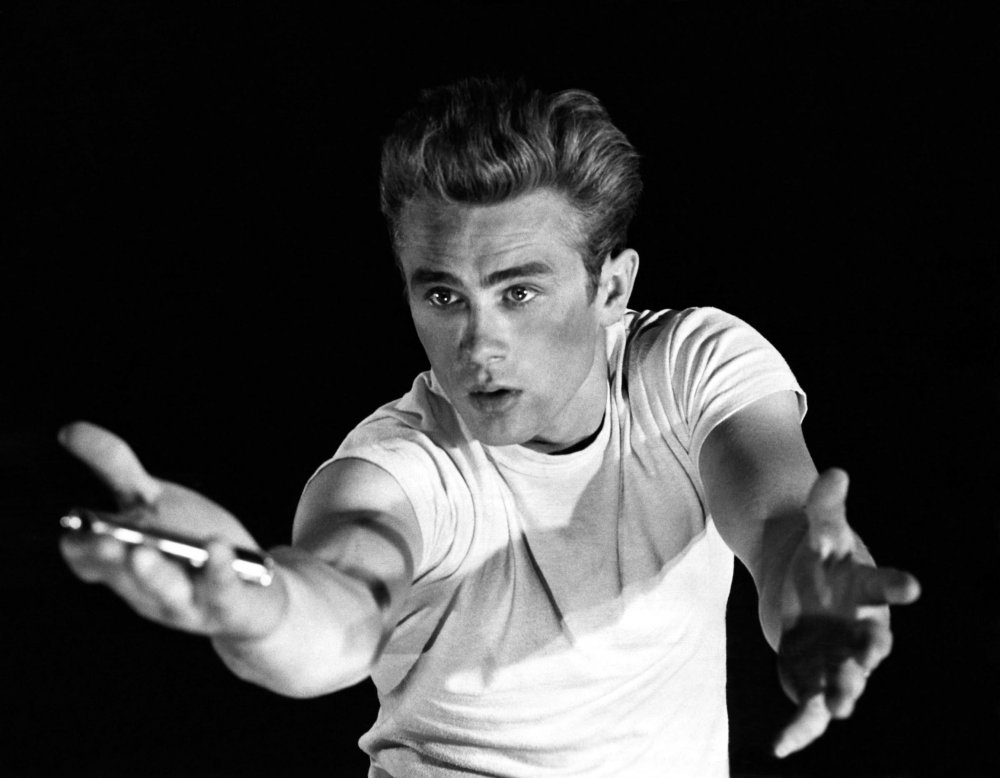 As Cal Trask in Elia Kazan’s East of Eden and as Jim Stark in Rebel without a Cause, James Dean made a double impact, kicking his career off with two lead roles in the year 1955. This was also the year he died, aged only 24 – in a car smash in September, four weeks before Rebel’s release. It was a heady kind of happenstance. Two adolescents; two movies playing to an America that was not in the habit of trying to understand its young people. Like a scapegoat, he took the growing pains of a nation’s youngsters on his back; like a patron saint, he’d die doing it.

James Dean epitomised an age that had not, nominally, existed before. The word ‘teenager’ didn’t come into use until the second half of the 20th century, before which time one described an adolescent in terms of what he or she wasn’t. You were what they called a ‘pre-adult’ – you were co-dependent, in-parentheses, apprenticed to adulthood. As Cal, Dean created an identifiable behavioural type, playing a capable, inquisitive kid growing up in rural California, competing for the affection of his evangelical father. He deepened it with Jim, a disillusioned adolescent, uprooted to a new town in Rebel without a Cause. Jim is the inarticulate custodian of his own inviolable sense of right, which sours him and saves no one in the end. Both boys had selfhood, sensibility; they were proud and anti-authoritarian, and as contradictory as any kid had a right to be.

These were imperfect characters, realer and running deeper than any of the roles assigned the child stars on studio payrolls in the 1930s and 40s. Mickey Rooney, Judy Garland, Deanna Durbin – sympathetic, apple-pie characters, clean living and compliant, ceding to or adulating adults. This was their lot, written in contractual ink. You needed no convincing to like them; that was the job. (Elizabeth Taylor, sexual and sociable, was an exception, graduating to grown-up roles without intermission.)

There were the juvenile delinquency franchises of the Depression-era and later, and kid actors like Frankie Darro – different again. These were movies about rogues in boys’ reform schools (such as Boys Town (1938), and the twice-remade The Mayor of Hell (1933), starring James Cagney) or – like the un-killable, low-budget ‘Dead End Kids’ film series – about teenage hoodlums going about in posses, lowering and slugging. But these were moral lessons, black and white, that pointed a finger at poverty, brutalisation and bad role models as the root of young rebellion. They were backstreet, underworld; they had no application to the middle-class teenager living at home under curfew. And in their depiction of a gang culture, a rascal-solidarity, these pictures shut out whole areas of the adolescent experience: the thoughtfulness of the teenager, the loneliness, the feeling of having no equal in one’s strangeness, of being painfully separate, misunderstood.

There’s a name missing here, and that’s Marlon Brando. Why had he not the same messianic profile? How did it happen that Dean caused such a groundswell, coming as he did after another screen actor who was himself a revelation when he recreated his Broadway role in the 1951 adaptation of A Streetcar Named Desire, and brought Lee Strasberg’s Method before a movie-theatre audience? Why Dean for the young, and not Brando? – Brando, who had presence; who was loved by Elia Kazan (“Marlon is just the best actor in the world”); whose The Wild One, about a gang of motorcycle rebels, became an instant pop classic upon its release in 1953?

It’s a valid question – since the debated extent to which Dean’s performances were derivative is dissolved in the James Dean myth. Brando was Dean’s idol. Dean even learned to play the bongos, which was Brando’s thing; “he used to peck at them all the time,’ said Dean’s guardian-aunt Ortense. The larger part of Dean’s notices in the press for his film performances, for the two stage plays and the 30 teledramas he acted in before these, remarked upon his resemblance to Brando. Truman Capote, in his infamous interview with Brando, ‘The Duke in His Domain’, called James Dean’s mannerisms “well-nigh-plagiaristic”. Perhaps he refers to Dean’s knuckling his fists beneath his biceps for bulk, which Brando built into Stanley Kowalski before Dean was out the door of the Actors Studio.

Inexplicably, like a teenager, Dean hated the comparison – but he had no cause for concern. There were two stark differences between them that ruled against the elder’s ever having the same sway over the teenage population. The first was Brando’s age: he was 30 when he starred in The Wild One and too easily separable from the film’s target market. The second, his size. Brando couldn’t hold them like Dean did, because he was just too big. His virility, so much on show, burned hot; he steamed, like Smell-o-Vision.

Dean, on the other hand, was small and slender; in the words of Germaine Greer, “he looked junior”, and his non-threatening physique allowed one to project oneself, imaginatively, in his place. You could throw most anything at Dean and it would take. “Dean was oneself,” writes critic David Thomson, and that’s right – but it’s a blind spot of most analyses of James Dean’s popularity that their writers do not say or see why, and I suggest that’s because they are mostly men. Why? Because Dean was unintimidating. His availability was key; he was anybody’s. 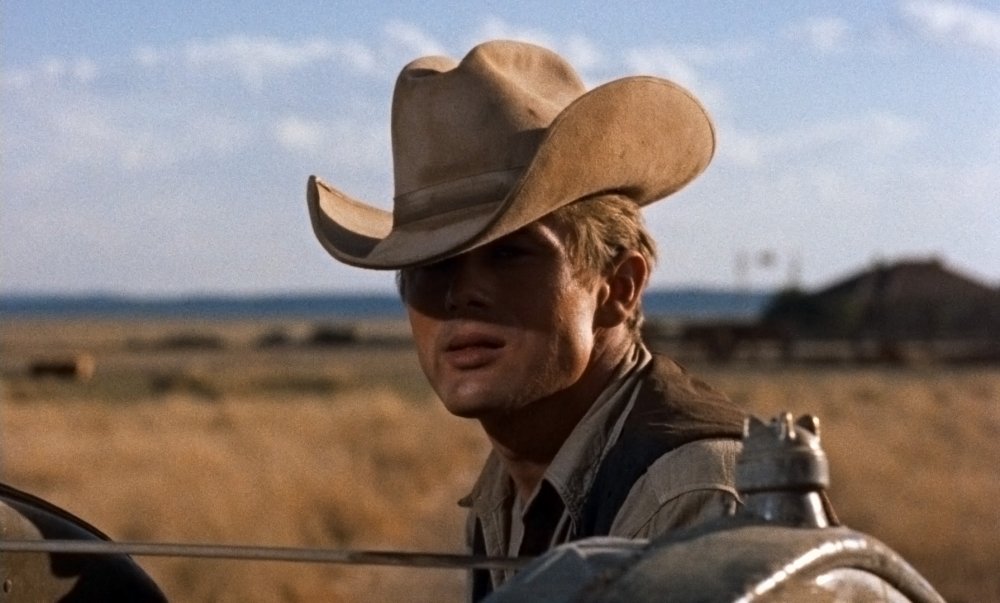 James Dean would go on to star as Jett Rink in George Stevens’ Gusher Age epic, Giant (1956). He plays a Texan hired hand who comes into riches when he strikes oil on the acreage of his competitor Bick Benedict’s cattle ranch. It’s been documented that Dean and Stevens, one of Hollywood’s greatest directors, did not see eye to eye on set. The veteran director, who was of an older school, was irritated by Dean’s meditative drift, his carrying his head in the clouds – but he later admitted that he had occasionally been wrong about how well the actor knew his role. He recalled one occasion when they had argued over how Jett Rink would take a drink from the Benedict bar. Dean insisted that he wouldn’t: that he might take a glass, but would fill it from his own personal flask. With hindsight, Stevens could see how this action might have been “the cutest bit in the movie”, but he had crushed it at the time.

For Dean, that ‘how’ was paramount. For him, the question was not who is this man so much as how would he do this, how would he walk, how would he be in this minute? As Cal, he leans the weight of his head in the cup of his hand, sometimes over his eye socket. When he puts on a jersey, arms first, he uses his head, not his hands, to work the neck free and down onto his shoulders. Dean’s performances are populous with action, with scores of ideas – for shapes, gestures, expressions. He counted them out, like prayer beads on a rosary.

Stevens might not have liked Dean’s way – “always pulling and hauling,” he called it – but Elia Kazan and Nicholas Ray, they used it. Jim, lying flat on his stomach in the road at the opening credits of Rebel without a Cause; Jim, leaping up from behind his white-painted gate with a ‘hi!’ for his new neighbour – Ray accommodated it. He craned in closer; cocked the lens. He let him prang and vault; he rolled in the dust if Dean rolled; and he zipped him up in a red jacket, vibrant red, like a scream.

Watching Rebel without a Cause, it’s hard to know where James Dean ends and Jimmy Stark begins. They shared the same name, and aspects of the narrative mirrored Dean’s own life story. (Dean was deserted by his father, aged nine.) And though he wasn’t a teenager any longer, when Dean described his relationship to acting he might have been describing the kind of alienation his fans were prone to feel: “Being an actor is the loneliest thing in the world. You are all alone with your concentration and imagination, and that’s all you have.”

The monastic sobriety with which he plied his craft, and which Stevens mistook for dreaminess, is absorbed in the rebel Jim, whose earnestness, whose sense of entitlement spoke to adolescents as they’d not been spoken to before. So with Dean, whose taking ownership of experience upended all they’d learned about abeyance and preparation for the future. As Richard Linklater would have his college grads muse 40 years later in Dazed and Confused (1993): “But what are we preparing ourselves for?”

Adam Goldberg’s Mike jokes “Death” in riposte. But Dean’s dying young, not a punch line, seemed one last whispered collusion: he wasn’t a phony, he hadn’t been lying, experience really was for the taking, and now was as good a time as any. Tragic as it was, and it touched off an hysteria and outpouring of grief not seen since the death of Rudolph Valentino, it seemed somehow consistent. Like an arched eyebrow or stiffening of the jaw, his death said, “Didn’t I live?” Or in the words of Dean’s 21st-century brothers and sisters – “And what?”