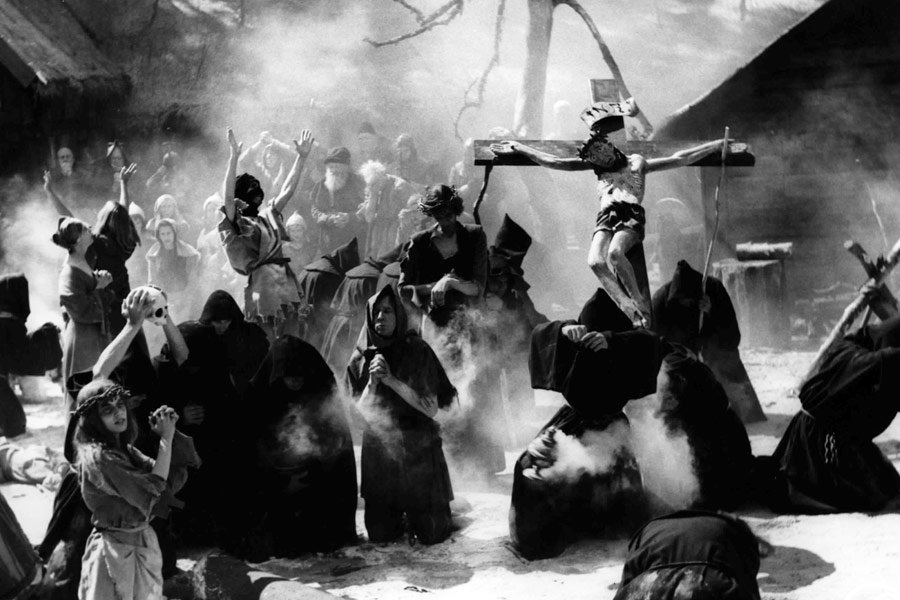 The parade of the self-flagellants in The Seventh Seal (1957)

For Ingmar Bergman ‘horror’ was part of everyday life. He often spoke about his demons – to which he gave names and identities – in his lifelong struggle to maintain control over the darker aspects of his personality.

Because of this internal conflict, Bergman’s cinema often seems to have derived from the liminal spaces between the wildest dreams, most horrific nightmares, and reality. The boundary is ever shifting within his self-created hinterland, shrouded in twilight, with fear and fantasy in constant collision. 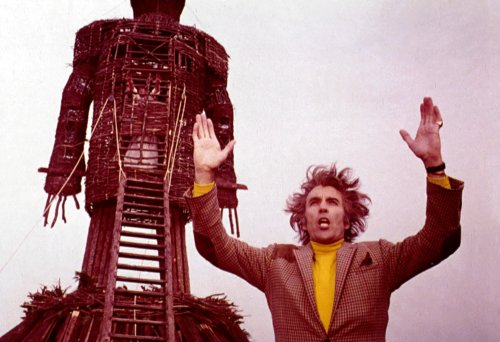 But can Bergman films be described as folk horror?

There has been much debate over what constitutes the folk horror subgenre. In popular culture it’s now widely accepted that the label is linked to a collection of British horror films from the late 1960s/early 70s, particularly a trio that has been dubbed the ‘unholy trinity’ – Witchfinder General (1968), Blood on Satan’s Claw (1971) and The Wicker Man (1973).

Yet, as many scholars, including Adam Scovell in his recent book Folk Horror: Hours Dreadful and Things Strange, have shown in recent years, folk horror extends much further than that to encompass all manner of mystical, pagan, folkloric and occult-inspired works. Not just films and TV, but literature, music and art too.

Writing for the Guardian in 1975 about a Tate Gallery exhibition of the work of Henry Fuseli, critic Caroline Tisdall argued: “Fuseli impressed from the start with his mingling of history painting, Shakespeare and dramatic folk horror.” The artist’s masterpiece, The Nightmare (1781), is engrained in popular consciousness, with its depiction of a gargoyle-like demon squatting on the chest of a beautiful sleeping maiden. Elsewhere Fuseli’s work is littered with terrifying and sublime visions of angels and devils. 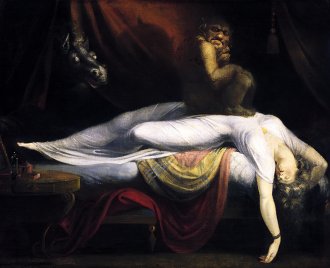 Folk horror demons in 1781? The Nightmare by Henry Fuseli

If this is folk horror, then Ingmar Bergman certainly owns a place in the genre on that score alone.

Bergman’s cinema is all about terrifying visions. In many respects, he returned to the theme of the waking nightmare time and time again. It was something he struggled with in his personal life, which plagued him constantly. For instance, Through a Glass Darkly (1961) and Persona (1966) both cover the theme of a woman losing her mind, during the process of which she is afflicted with visions, until her sense of self completely disintegrates.

This alone isn’t enough to class these particular films as folk horror though. Hour of the Wolf (1968), on the other hand, combines Fuseli’s demonic nightmares with folkloric elements, and therefore rightfully owns a place in the canon. 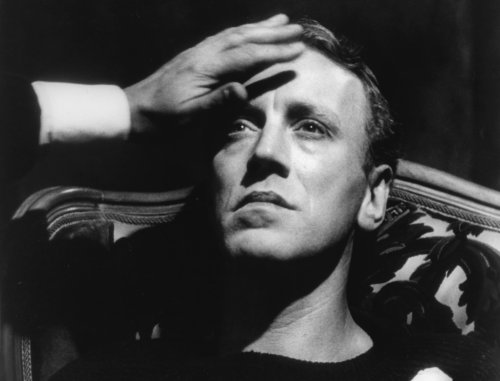 The artist plagued by demons in Hour of the Wolf (1968)

As one of Bergman’s most autobiographical films, Hour of the Wolf centres around a paranoid artist, Johan Borg (Max von Sydow), who has recently moved to a rural island with his wife Alma (Liv Ullmann). Soon after, the man begins to suspect that the local inhabitants are demons in disguise. Thus starts a downward spiral, where Johan eventually loses his mind.

He encounters a series of sinister people, including a child who savagely attacks him, a long lost lover who is sexually promiscuous, and a number of other demonic forces. Johan tells foreboding folk tales of little people who come to gnaw off the toes of naughty children – a story that was often repeated to Bergman during his childhood.

Later, Johan explains: “The ‘hour of the wolf’ is the time when people are most likely to have nightmares, when people are more likely to die, and children to be born.” The landscape also plays a large part in influencing the artist’s decline into madness – a typically folk horror context. He believes he has much to fear from the forest and desolate beaches of his supposed sanctuary. He is also profoundly affected by the superstition surrounding the nature of demons.

Witchcraft, Death and the plague 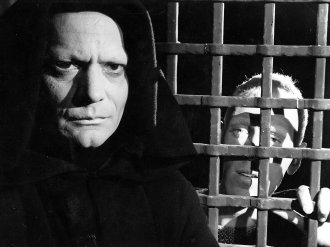 Death and the knight in The Seventh Seal

Bergman’s The Seventh Seal (1957) and The Virgin Spring (1960) hold an even more obvious connection to the genre. The medieval setting of both films offers up the opportunity to pack each narrative with aspects of paganism and witchcraft, wild landscapes, folklore and superstition.

In the case of The Seventh Seal, the director was inspired by a church mural he saw as a child, titled ‘Death Playing Chess’ (Döden spelar schack), which was housed at Täby church, near Stockholm. This gives the film a solid link to a historical past, where supernatural terror and religious forces combined to create a very real culture of folk horror during the Dark Ages.

In the film, Max von Sydow plays a knight, Antonius Block, who has returned from the Crusades with a crisis of faith. Adding to his troubles, Death (Bengt Ekerot) comes to claim him.

Exhibiting traits of a medieval morality play, The Seventh Seal sees Block attempt to cheat death so he may embark on a spiritual journey. Challenging the Grim Reaper to a game of chess, which is ongoing throughout the plot, he travels across the brutal landscape, inflicted with plague. 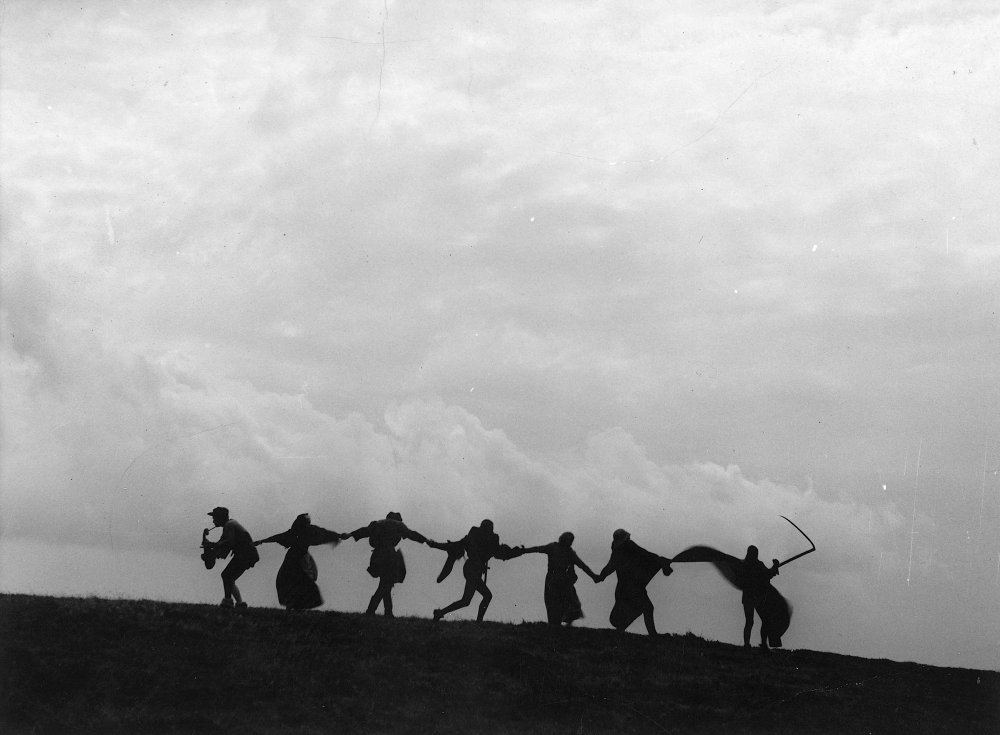 The dance of death in The Seventh Seal

The horror comes from the barbarity he encounters. Bergman also adds in aspects of witchunting, which wouldn’t have been out of place in a film like Witchfinder General, but were in the time period in which The Seventh Seal is set – European witch trials wouldn’t begin in earnest for a couple of centuries after the Crusades ended, following the publication of the Malleus Maleficarum.

Artistic licence aside, this aspect aligns The Seventh Seal with a subset of folk horror-infused European arthouse dramas, such as Andrei Tarkovsky’s Andrei Rublev (1966), František Vláčil’s Marketa Lazarová (1967) and The Valley of the Bees (1968), and Otakar Vávra’s Witchhammer (1970).

The Virgin Spring, which would later inspire Wes Craven’s exploitation horror debut The Last House on the Left (1972), has a similarly grim setting to The Seventh Seal. Tracking an innocent girl’s desecration and obliteration when she is raped and murdered by a gang of degenerates as she makes her way to church through the forest, Bergman once again derives horror from a real setting, which is grounded in folklore and superstition. The screenplay was inspired by a 13th-century Swedish ballad, ‘Per Tyrssons döttrar i Vänge’. 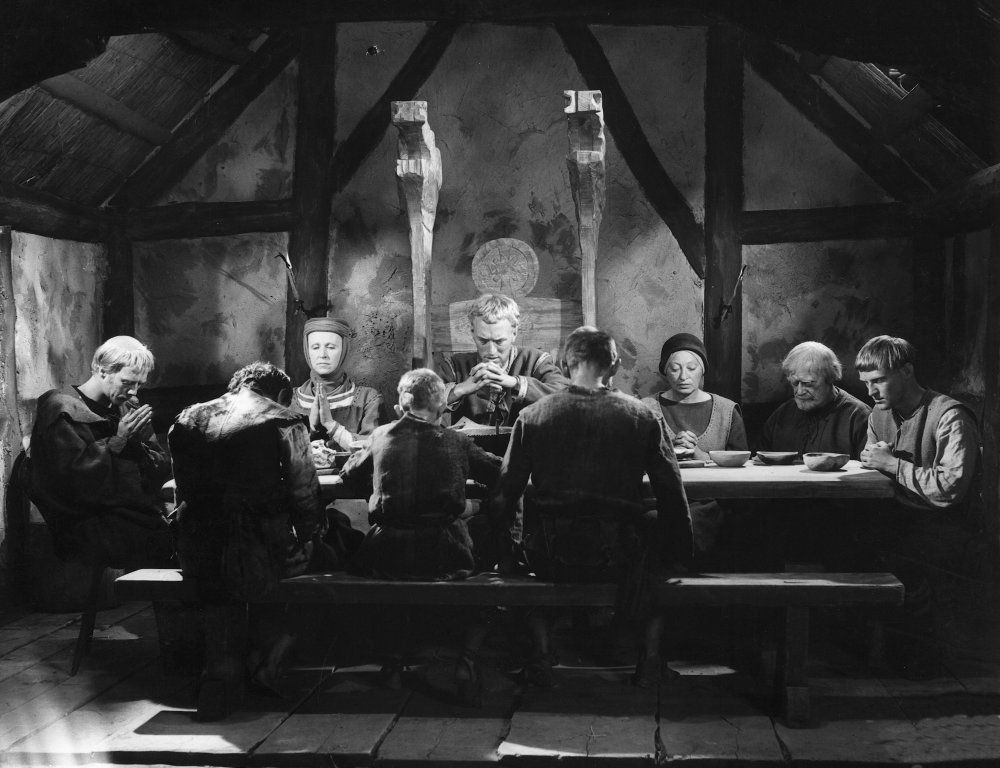 Of all of Bergman’s films with folk horror traits, The Virgin Spring is the most pagan. It uses aspects of Norse mythology and examines the conflict between ancient beliefs versus Christianity. One of the characters, Ingeri (Gunnel Lindblom), is seen praying to Norse god Odin. Throughout the plot it’s insinuated she’s a witch, and therefore treated with suspicion. Further horror comes through the victim’s father’s (Max Von Sydow) rampage of retribution, and the killing of an innocent, as well as the theme of rape and other barbarity inherent in the plot. 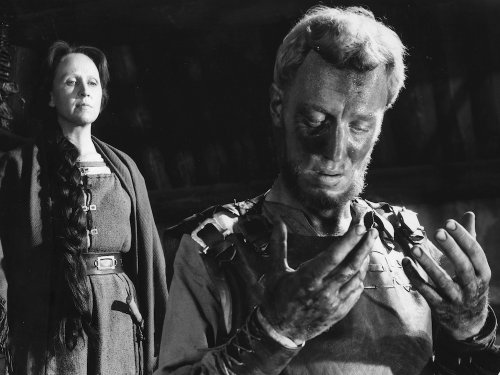 The vengeful father in The Virgin Spring

For these reasons, it’s evident how Bergman’s work often aligned with and anticipated the later harvest of folk horror films that emerged in Britain. Throughout his career, the director used aspects of his own terrors and nightmares as inspiration for his films. His profound connection to the landscape (he described his first visit to the island Fårö, the place he would make his home, and where he shot many of his films, as “coming home”) meant that while he might not have been conscious he was dealing in folk horror, the work he created often instinctively wandered into the territory.

Recognising that aspect of his work offers the possibility of exploring a rich cultural and folkloric context to Bergman’s films.