From the Empire’s archive: visualising the ‘Great Game’ in Pakistan’s hinterland

The world of the North-West Frontier, the Khyber Pass and Rudyard Kipling’s Kim is captured in a selection of archive films on BFI Player. What lessons can we learn from these despatches from the colonial past of the borderlands of today’s India and Pakistan? 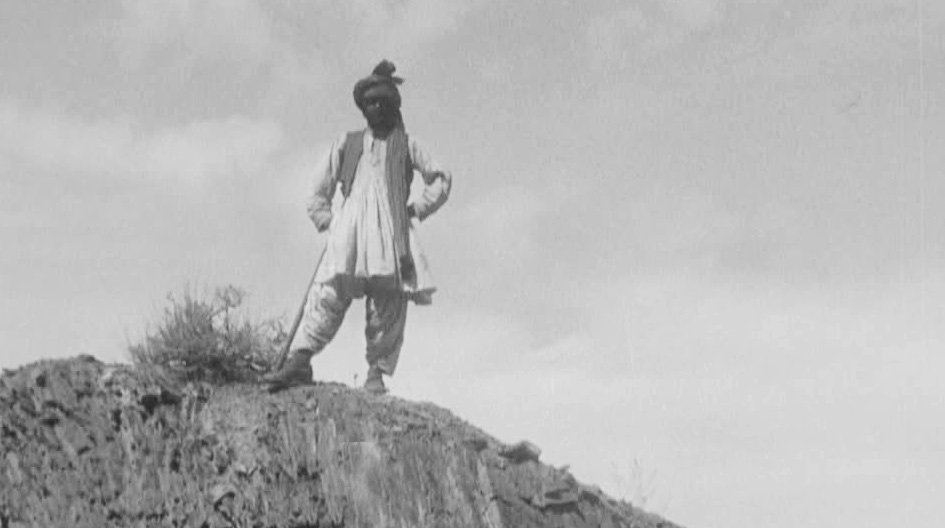 Explore the India on Film 1899-1947 collection on BFI Player

The BFI’s India on Film 1899-1947 project makes a striking contrast with the recent spate of vibrantly coloured feature films featuring an exotic India that all too often eclipses the history of a bloody Partition.

The mostly black-and-white, often silent films from the BFI’s collections all hail from the era of ‘British India’. But while they are visualised from the perspective of the colonial rulers, they offer a rare glimpse into the minutiae of empire and demonstrate the British obsession with cartography, as the ‘motherland’ sought to entrench its power in the subcontinent.

Embedded in some of these films is also the historic 19th-century rivalry between the British and Russian empires, battling out their claim over Asia. This ‘Great Game’ of espionage is relived as a young boy’s adventure in Rudyard Kipling’s 1901 novel Kim, narrating the imperial experience in India. The themes of journeying and adventure central to Kipling’s novel are a significant feature of the archival films too.

The colonial presence in this region was riven with violence and disputed border-making, a context that seems forgotten in contemporary filmic depictions of an exotic east, but one that underwrites the making of these amateur films, which implicitly assume the supremacy of the British Raj over its arch-rival, Russia.

The films range across India and (what is now) Pakistan, and sometimes beyond, reflecting the diversity of the Indian empire through British eyes. They express the curiosity of the travelling explorer and the experience of the settler.

Featuring landscapes, major cities, bazaars, people and migration, the films explore the territorial borders across the Punjab, the North-West Frontier Province, Baluchistan and Afghanistan. Their origins and purposes are diverse: some chronicle family life, others survey government or missionary work, still others offer a form of vicarious tourism for audiences in Britain or elsewhere. But in retrospect they become ethnographic studies as well as historical records, giving us rare insights into the military apparatus of the Raj, its conquests and the explorer’s fascination with the exotic east.

A number of films in the collection – which we might call ‘borderland films’ – offer a distinct narrative cataloguing the land, the people, trade, and industry. The borderlands these films explore or imagine are those territories where the British established new boundaries (as in Kashmir) that have been contested over time.

Many of these films were made by British Instructional Films (BIF), the leading producer of science, geographical and educational documentaries in the 1920s and early 30s, whose catalogue boasted countless empire subjects under such series banners as The Heart of Asia or The Empire.

Perhaps inevitably, the films’ intertitles betray some of the ideological context of their time, framing the local subjects as passive and subservient to the expansion of empire. But they offer insights into particular stereotypes that have become normalised over time, and reiterate the narrative of power and militarisation in the subcontinent.

The 1928 amateur film Khyber Pass; Kashmir; Agra visits the famed mountain region near today’s Afghan-Pakistan border – since immortalised in the British cultural imagination thanks not least to Carry On… Up the Khyber (1968). The film reflects a tourist’s gaze as it juxtaposes three disparate images of British India, from the Khyber Pass to Kashmir’s Dal lake, with its distinctive houseboats, and on to the Taj Mahal at Agra. Interspersed with these somewhat romantic shots are close-ups of people, traders, Bactrian camels, mules and British colonials in vehicles. 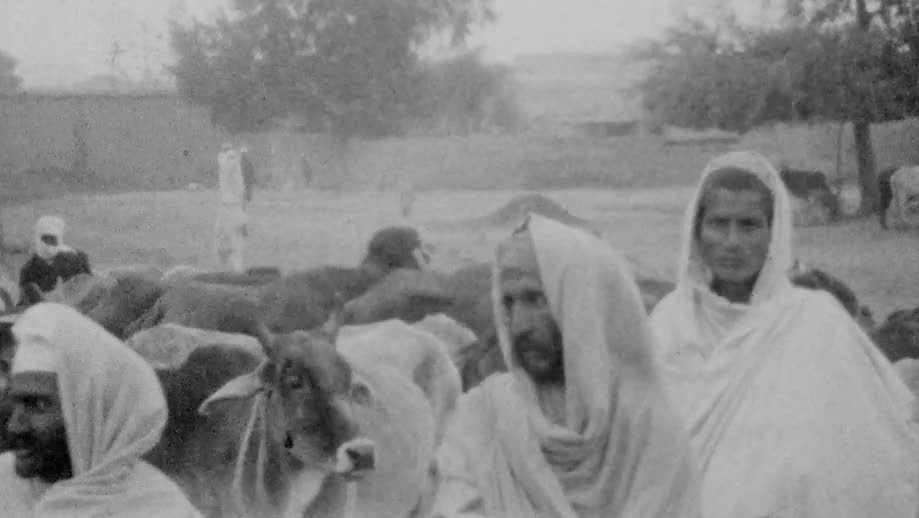 The Khyber Pass (and camels) are revisited in the more polished BIF travelogue The Northwest Frontier Province, also from 1928, which emphasises the silk industry in Peshawar and illustrates the British appropriation of the legendary Silk Route. Significantly, the gun-making industry – central to trade in empire and a part of the frontier’s economy – also features.

The film painstakingly explores the region around the province’s capital city, Peshawar, detailing small villages alongside military and economic outposts in the area. It firmly establishes the British at the centre of an ancient trade route as key players in a modern industrial economy. A number of title cards illustrate the geopolitical setup of the Raj with the Northwest Frontier and the borders with Afghanistan. James Fairgrieve, a celebrated Scottish exponent of Human Geography (that is, the study of people and their communities, cultures, economics and environment) acted as supervisor, and his influence shows in the film’s ethnographic detail. 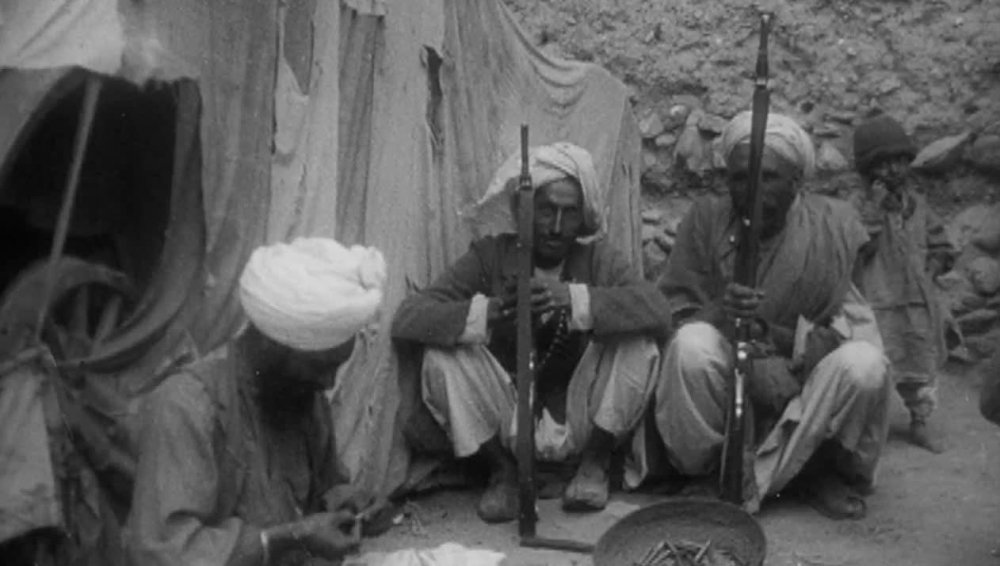 Another 1928 film, Balochistan, is one of several titles in the collection from BIF’s The Heart of Asia series. Our interpretation of the film’s narrative is heavily directed by the intertitles, which, while highlighting the geographical aspects of Balochistan, also romanticise it.

Images of the province’s capital, Quetta, known as one of the ‘finest hill stations of British India’ and a military garrison town, serve as a contrast – both economically and militarily – to montages visualising the hostile environment and geography of the arid mountainous terrain. There are also shots of Quetta’s bazaars selling grain and bangles. 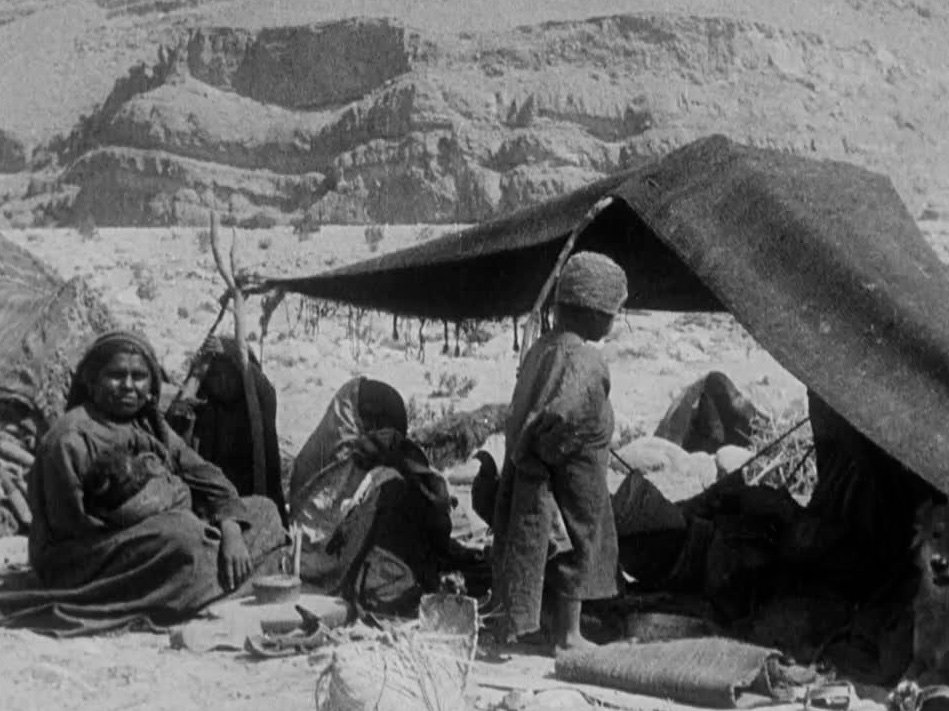 The sometimes quirky intertitles introduce a paternalistic voice tinged with irony, best captured in the poetic intertitle addressed to a son of Balochistan surveying his land: “when the world was created the rubbish was left in Baluchistan, which at first glance seems to justify”. The first part of this statement reproduces an Arab proverb, reflecting the longer history of empires – Persian, Arab and Mughal – that have impacted the borders of the region, while the latter part positions the British as impartial observers.

However, the authority of the British empire is emphatically reiterated in the final intertitle, which tells us that the duty of the colonial subject is to guard and protect “Britain’s interests in the south east”. This is accompanied by a close-up of a white pillar marking out the territorial boundary line between Afghanistan and British India at the end of the ‘Kojak Pass’. It’s a fitting conclusion to the visual representation of British India’s frontiers, from the Bolan Pass to the Khojak Pass leading into Afghanistan.

This film serves as a reminder of the historic Durand Line; the dividing line was the outcome of an agreement in 1893 between Sir Mortimer Durand, secretary to the British Indian government and Abdur Rahman Khan, the Emir of Afghanistan. The British fought a number of tribal wars to establish their power up to the Durand Line through indirect rule. Their dividing line messily cut across tribal communities and politically the border continues to be a source of disagreement between Pakistan and Afghanistan.

One particular amateur film that leaves a lasting impression is Quetta Earthquake, May 31st 1935, which movingly records the aftermath of one of the deadliest earthquakes on record, taking in scenes of the devastation, rescue operations, the harrowing search for bodies and the rebuilding of the city. Interspersed with rescue efforts and geographic detail we see locals having a tea break.

From this human scale it moves to the geographic, mapping the Bolan Pass through locations such as the ‘west end’, the imposing Mt Chiltan marked by rockfalls and the village of Dingra, ending with the disturbing image of Quetta being taken away in lorries with the help of a ‘drag line excavator’. A striking and incongruous shot in the early part of the film sees the Indian staff clearing the debris for the sahib’s British ‘baby Austin’ car. 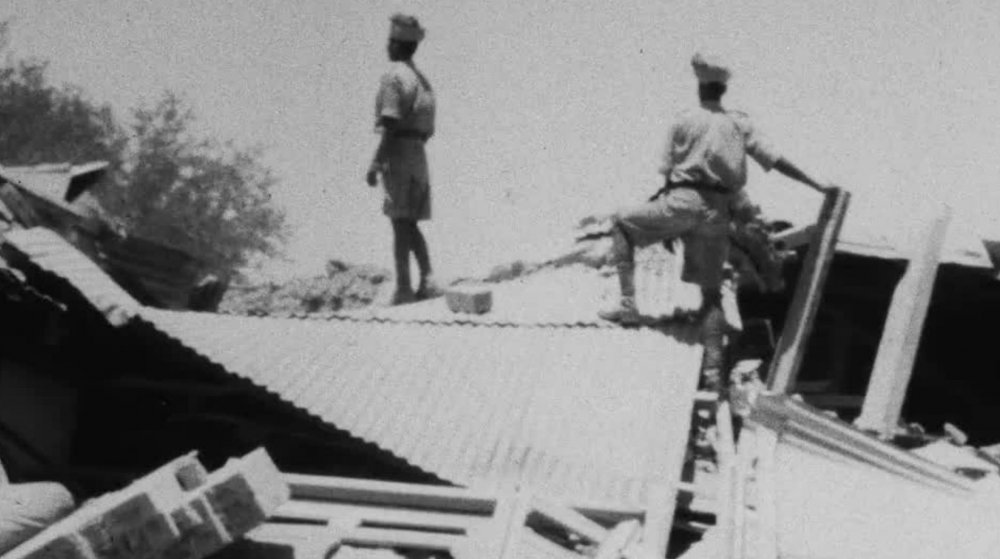 The film also captures the visit of the Khan of Kalat, one of the titular rules of the Kalat state in Baluchistan Province. His official call underlines the British strategy of indirect rule by installing friendly allies in the princely states to maintain power. There are also some rare scenes showing women as beggars, nurses and earthquake victims.

Combined with the narrative of the courtly Khan is an image of fleeing Brahui tribesmen from Kalat shot against the imposing backdrop of the mountain range. This commingling hints at the British strategy of winning hearts and minds by maintaining multiple relationships with the court and the tribes in Balochistan. As the camera moves between locations, from images of structured British bungalows and administrative offices reduced to rubble, to views of natives in tents, Sikh death rites and burning ghats, it captures on celluloid the ruptured social and racial divisions of a colonial city.

The lessons of history

Overall, this rich and varied collection of films records the aspirations and the endeavours of the colonial administration and details the geographical and ethnic diversity of the region. Most of all, the films reiterate the British empire’s obsession with the Great Game and its control of territory by ostensibly peaceful means.

In retrospect, this ‘benevolent’ system reinforced rivalries between ethnic groups, bolstered military power and introduced territorial borders that remain contentious. Watching these films, we are reminded of both the pomp and glory of the Raj and the arbitrariness of mapmaking that transformed identities and affiliations to suit an imperial power.

In an era of Brexit and changing global developments such as the new China-Pakistan Economic Corridor (CPEC), the British state once again turns to its Commonwealth nations (not least India, its former ‘Jewel in the Crown’) to foster economic growth. It’s all the more pressing, then, that we look back at the lessons of history and take account of the human and economic costs of Britain’s imperial adventures, and reconsider the contested borders – from Afghanistan to Kashmir – that still contribute to the politics of violence in the subcontinent.

J. Daniel Luther is a doctoral student at SOAS University of London