IWM’s (Imperial War Museums) Toby Haggith explains the history and significance of the Ministry of Information’s film record of the atrocities of the Nazi concentraton camps, shot in the immediate aftermath of the Second World War. 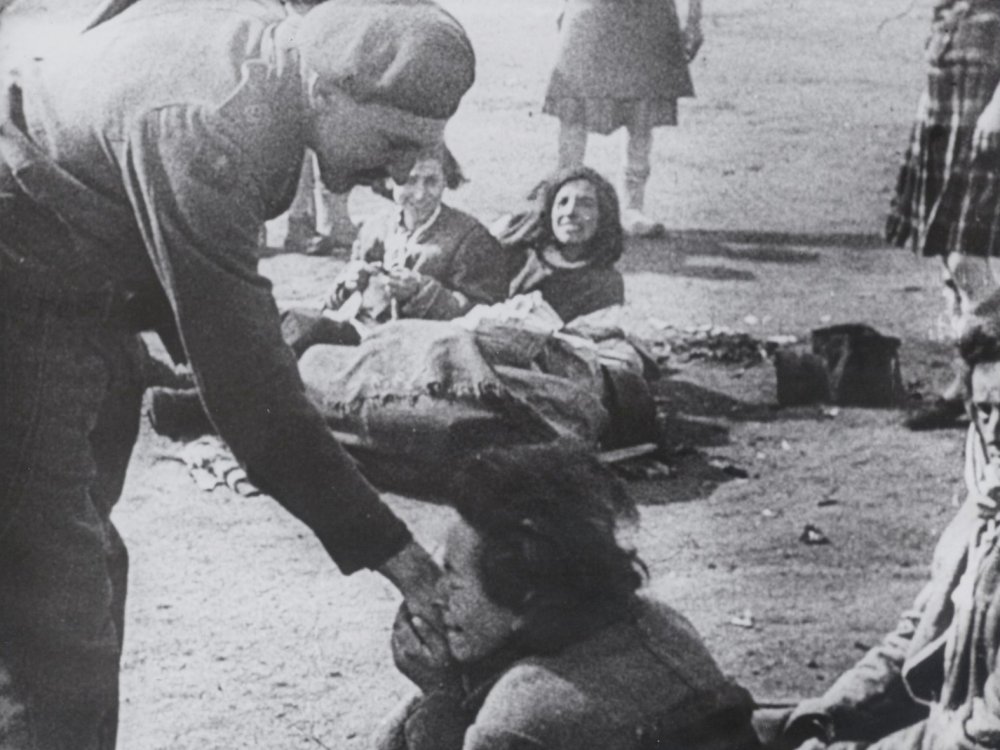 Early in 2014, Imperial War Museums (IWM) completed a lengthy project to restore and complete the wartime British documentary German Concentration Camps Factual Survey, a title so modestly functional that it barely does justice to the importance and quality of this exceptional film, which I consider the lost masterpiece of British documentary cinema.

This was the Allied film to be screened to Germans and PoWs after the fall of the Third Reich. Its purpose, as defined by Sidney Bernstein, the film’s producer at the Ministry of Information, was to help the Allied occupation of Germany by undermining any lingering support for the defeated Nazi regime and making the general population aware of its shared responsibility for the crimes.

The film’s long-term aim was to prevent Nazis in the future from trying to deny or minimise the atrocities, or to claim they had been ignorant of them. Work on the film as an Allied production was prompted by the discovery in Germany of numerous camps and sites of atrocity. The first footage, shot by American cameramen at Hadamar and Ohrdruf, was shown at the MOI on 10 April 1945. However, Bernstein and his colleagues in the Films Division of the MOI had, since April 1943, recognised the value of such a film for the ‘re-education’ of the defeated German nation, and indeed a film about German atrocities, compiled from library footage of atrocities discovered in the Soviet Union, Belgium, Italy and elsewhere, had gone into production in March. However, with the discovery of the horrors within Germany itself, the project became suddenly more urgent and received the backing of Allied Command, via SHAEF (Supreme Headquarters Allied Expeditionary Force), for whom Bernstein was also working at the MOI to develop a programme of films to be screened in the cinemas of liberated Europe.

Effectively the project was approved by General Eisenhower and, at one point, he was even to provide a filmed introduction. In fact, up until early August 1945, the plan was that the film would end with statements from the Big Three: Truman, Churchill and Stalin. Reflecting its importance, the MOI took responsibility for the production of the film itself and its best editors were put to work on it. In Richard Crossman and Colin Wills, Bernstein had recruited two of the best writers of the time, and he canvassed top British and American filmmakers to direct it.

Filming in the field 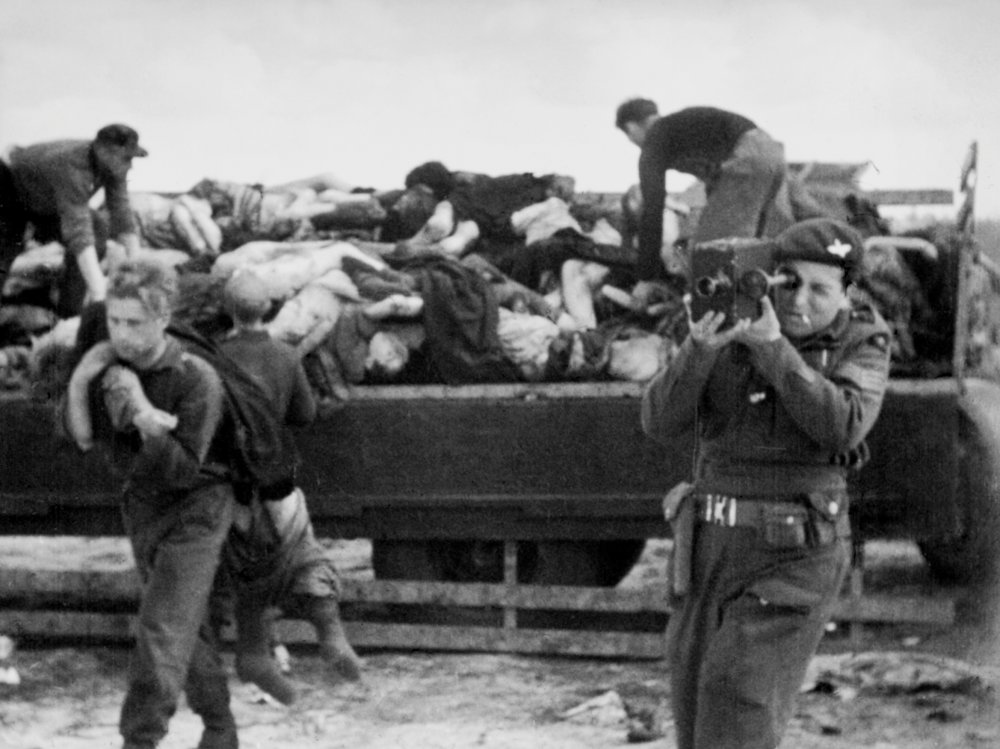 While much of the interest in this film has inevitably focused on who directed and, to a lesser extent, edited the film, the most important people in the creation of the film were the 43 cameramen (seven British, 28 American and eight Soviet), who filmed at the 14 locations (10 camps and four sites of atrocity) covered. Although Sidney Bernstein sent directions about what and how to film, these arrived after the bulk of the filming had taken place. In fact, only on two occasions do we know that cameramen shot material specifically for the film, or ‘serial F3080’ as it was also known.

The cameramen’s record was comprehensive, intelligent and damning. Fuelled by anger and a determination to condemn the individual perpetrators as well as the regime that had led to these horrors, the cameramen filmed the scenes of atrocity in close detail and were exhaustive and candid in their coverage of the suffering of the survivors. Viewed out of context, this footage can seem callous and even sensationalist and exploitative, but this is to completely misinterpret the motives of the cameramen. Firstly, there was the need to maximise the evidential potential of film, by getting close to the victims so the evidence of brutality could be revealed. Second, the cameramen’s duty was to film what they saw: to shy away from reporting scenes in full might now be seen as censorship. Third, they, along with other witnesses, frequently reflected that the reality was far worse; the film was just an approximation, hence the need to frame to intensify the horrors. They also showed much intelligence in the framing, for example, adopting panning shots and filming each other as well as identifiable Allied figures to corroborate the footage. They also filmed scenes of Germans being made to witness the horrors, which were to shame as well as corroborate.

The first stage was to collate, view and sort 75,000ft (nearly 14 hours) of newly shot footage supplied by the British Army Film Unit and the US Army Pictorial Service. The best footage was then assembled into logical groupings for each location. Meanwhile, Gordon Taylor, an intelligence officer, was gathering factual information, much of it secret, to help make sense of the material. The next stage was to get a writer and director to structure these groupings into a complete film, by writing a treatment and the early drafts of a commentary. These texts would then inform the making of the rough cut, a complete version of the film made by splicing together scenes from prints (positives) of the rushes.

Two writers worked on these elements, first Colin Wills and then Richard Crossman. We know that Wills had a conference with Alfred Hitchcock at the start of his work and that the finished versions were then sent on to him for further development. As well as producing the next version of the treatment, it is believed that Crossman wrote the final commentary, drawing inspiration and factual information from the cameramen’s caption sheets, military intelligence, and by viewing the film that had been assembled.

It is likely that Crossman consulted Hitchcock over the script and Hitchcock may have had a hand in some of the writing. But as Hitchcock’s time in England was short, he could not oversee the making of the rough cut and, as a result, it was Sergei Nolbandov and the editors Stewart McAllister and Peter Tanner who were responsible for the final shape of the film; especially the decision on the order of locations after Dachau, and the treatment of the final reel. Stewart McAllister edited together the Belsen section; Peter Tanner then edited the other camps and sites from Dachau to Gardelegen, and was to cover Auschwitz and Majdanek in the last reel.

The final part of the film, dealing with the prisoners’ possessions (the ‘loot’) and the closing montage were to be edited by McAllister. However, although the precise ideas and shape for this final reel exists on paper, it was not possible to complete the rough cut or the film. The final action took place on 29 September, when the five-reel rough cut of the planned six-reel film was screened to Sidney Bernstein. Less than a month later Bernstein left for America, the film was shelved and the team moved on to other things. 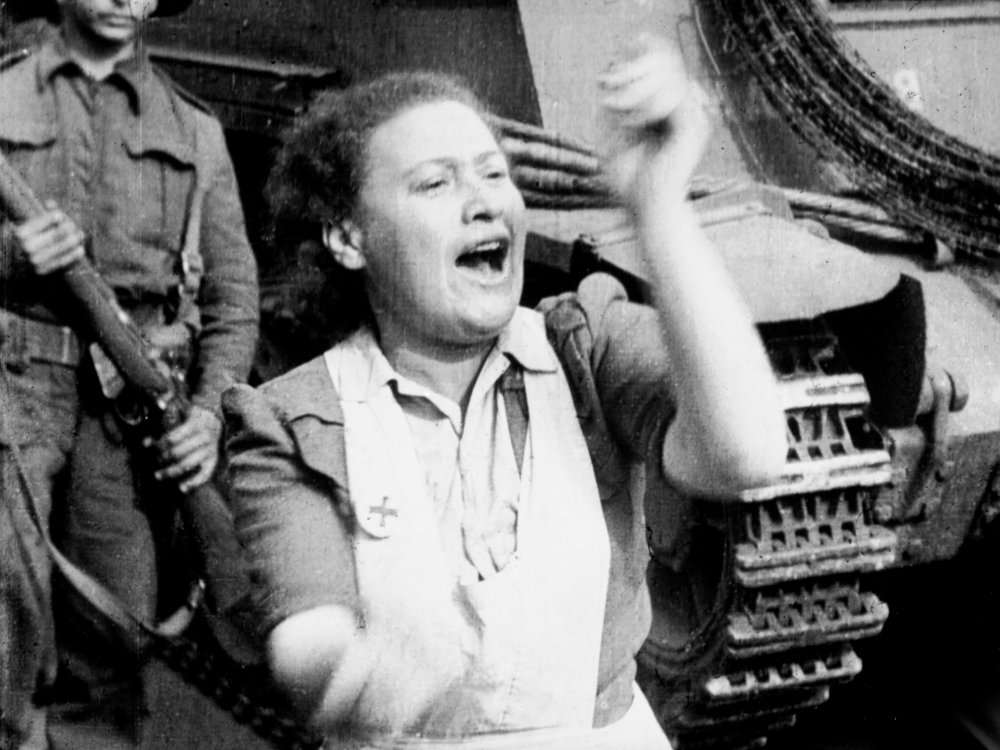 There is however, an intriguing post-script to this phase of the film’s life, as we have recently discovered that some unnamed MOI technicians resumed work on the film in March 1946. The extent of their work is not yet clear, but the film remained incomplete by May of that year, when it was finally set aside. This helps to explain why the script for the commentary is dated 7 May 1946. This episode also reinforces the contention that this film was not suppressed, but that production was postponed in the autumn of 1945, until the political and production climate were more favourable for its completion.

Night Will Fall, the documentary about the making of the film, offers various possible explanations as to why it was not completed and released in 1945, but what has happened to it since? In May 1952, the five-reel rough cut, along with 318 reels of rushes, a script for the commentary and a complete shot list (a description of every shot to appear in all six reels) were deposited at the Imperial War Museum. In the early 1980s curators at the museum and Sidney Bernstein’s biographer Caroline Moorehead became aware of the importance of the material (at this stage accessioned and preserved but untitled) and the rough cut was screened at the Berlin Film Festival in February 1984, with the allocated title Memory of the Camps. This incomplete version has been widely available from the IWM and the PBS broadcaster Frontline since the mid-1980s. By 2005 it was clear that the master copy of Memory of the Camps would need to be restored, and we believed that this work could also encompass a more ambitious project to complete the film, using the original filmmakers’ directions.

Shepherding the film into the public sphere 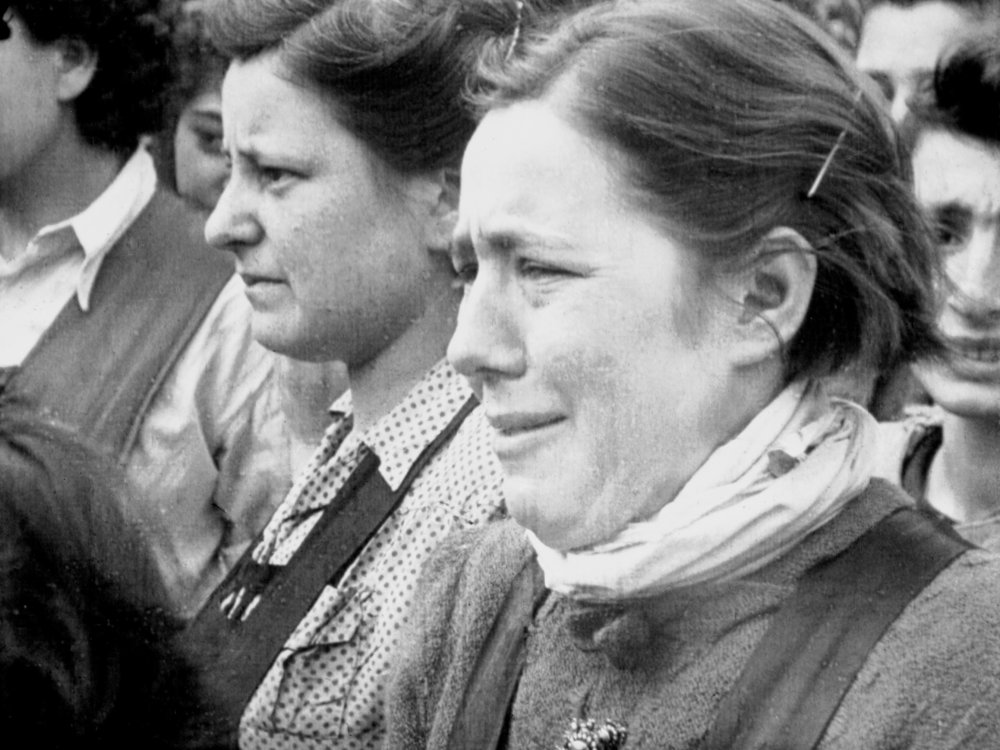 In the end the project to restore and complete the film took more than five years. As well as the technical work on the film itself, there was the question of how such a challenging film should be presented to an audience. Firstly there was the confronting and alienating nature of its content: even experts on the subject of the Holocaust, familiar with the atrocity footage of this era, often state that this film is the most disturbing they have seen. Secondly, there are the various factual inaccuracies cited in the film; notably the figure of four million for those killed at Auschwitz (now calculated as 1.1 million), and the claim that people were gassed at Dachau. Finally, there is the film’s outdated interpretation of the history of what is now known as the Holocaust. This word, Shoah or the phrase Final Solution are not used, in fact the viewer will notice only passing reference to the Jewish victims of Nazi terror, but nor is there any mention of others who were singled out for oppression, such as homosexual men and Roma and Sinti.

To put the film in historical context and to prepare audiences for the film’s disturbing content, we made it a stipulation that every screening had to be introduced by a member of IWM’s restoration team. And, aware of the stunned silence that followed screenings of the film, we wanted to help viewers reflect, as one colleague put it, to ‘decompress’. Therefore we insisted that the film be followed by a Q&A, again led by a member of staff. Since its world premiere at the 64th Berlinale, the IWM team has represented the film on 16 occasions. Now that the film is being made more widely available through BFI Distribution, personal representation is not practical and so IWM has made two short ‘orientation’ films to accompany the film (Intro and Outro).

Finally, a note on the title: all the titles, subtitles and credits, had to be compiled and created as none existed in the rough cut and the filmmakers left few clear instructions in the documents (except for THE END). However, the main title is not a new one devised by IWM, but the name by which the film was listed in the MOI Catalogue of Films For Liberated Territories, published in September 1945.

More information about the film and the work to restore and complete it can be found at: IWM.org.uk