One of Britain’s greatest documentary filmmakers, Humphrey Jennings has long been acclaimed for films such as Listen to Britain and Fires Were Started which beautifully evoke everyday heroism in times of war and peace. Marie-Louise Jennings recalls her father’s boundless energy and creativity. 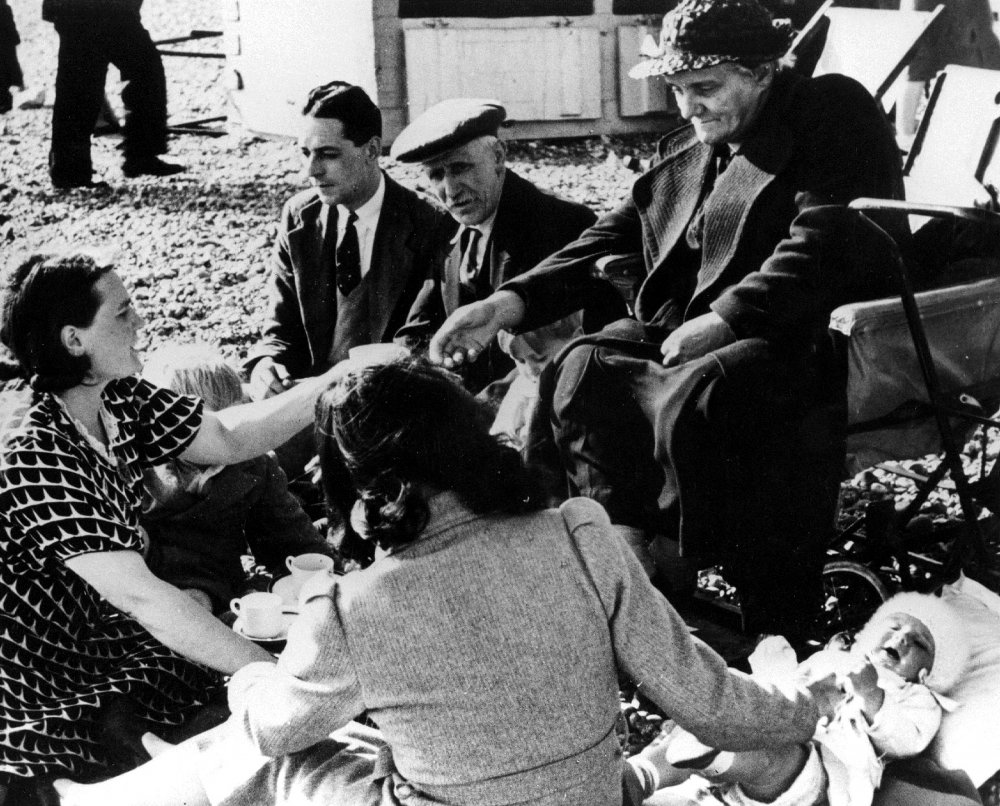 My father, Humphrey Jennings, died over 60 years ago. He would have grown to a great age – his younger brother died only last year aged 97. To me it still seems strange that such a strong personality has gone, yet of course he survives in his films. But they cannot convey his stream of talk, his jokes, his stories. Nowadays he would be called a ‘workaholic’. If he wasn’t away making films he would be painting and writing at home. He would go regularly to The National Gallery, the Tate (now the Tate Britain) and the galleries in Cork Street when he was in London.

But often he wasn’t in London, he was away making films. After the war he may well have wanted to get out of filmmaking, but he had to make an income to keep himself and his family.

Tall, skinny, bony-faced with short blond hair and blue eyes, he was in some ways a lonely man. That is to say he didn’t feel lonely, but he was not a ‘joiner’ of groups. He had been an only child for eight years before his brother was born. Being good at writing, painting, acting, languages and sports did not make him popular. He could speak French like a Frenchman, and read and spoke Latin and Greek at school.

He said that he was bullied at school, which may well have been true, as boys don’t like those who are clever. Many of his contemporaries disliked him – Stephen Spender whom he met in Cologne after the war – took violently against him for being, he believed, a show-off. Maybe he was a show-off; he enjoyed talking.

For his film crews, working with him was a joy and a deep irritation. Although no bombs were dropping when they were making Fires Were Started (1943) in the East End, they were setting damaged factories alight with paraffin. My father showed absolutely no fear in leaping from rafter to rafter on the roof. But the crew got so irritated with him that once they shouted up to him: “Just a little bit further back Humphrey… just a little bit.”

His great talent was to find the exceptional in the ordinary. What he saw on his trip to Burma in 1947 was for him something different – if he had been able to make the film he had hoped there, the criticism of his post-war work would have faded. Unlike the rest of his work, this trip is almost entirely unknown. Burma had a profound effect on him: Burma, its colours, its people and the way Buddhism infused their lives overwhelmed him.

The letters he wrote to my mother show vividly how deeply the country affected him. His short descriptions of the water festival, the funeral of a priest, and a night-time performance of a play, reflect how he looked at the life around him. Travelling up to the border with China, along the coast to Arakan and across to Mandalay, his scraps of notes, though apparently random, were the beginnings of what he would have used in making a film. We do not have these scraps for any of his other films, and they are important in discerning his vision. It is very much hoped that these texts, together with the superb photographs that he took, might one day be published.

Returning to England, it was found not to be possible to make a Burma film: my father said it must be made in colour, and colour stock was too expensive and in short supply.

All the time while he was filmmaking he was also painting and working on the book Pandaemonium, about the effect of the coming of the machine on our minds, our language and our vision. Never published in his lifetime, an abbreviated edition came out in 1986, and has since been republished three times, and had a profound effect on Danny Boyle when he directed the 2012 Summer Olympics opening ceremony.

My father went to Europe in August 1950 to make a film, The Good Life, on health for the European Economic Commission. His last country was to be Greece. In Athens he had wanted to visit a writer who lived on a island off the coast, but he got on the wrong boat and arrived on the island of Poros, where, climbing up rocks, he fell, injuring himself mortally. He died in Athens and is buried there in the First Cemetery.