How London has changed since Stanley Kubrick’s A Clockwork Orange 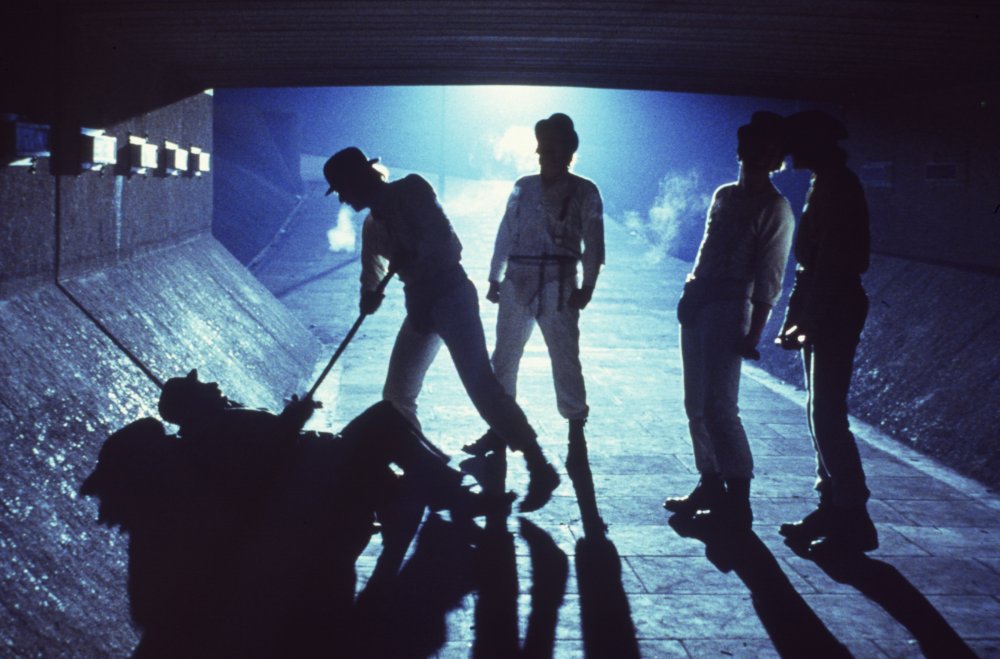 A Clockwork Orange was never going to be a reliable time capsule of London in 1971. Kubrick ingeniously morphed the city into something entirely new, splicing together carefully selected buildings and backdrops – typically brutalist architecture, all grey concrete and labyrinthine walkways – to reflect the mood of Anthony Burgess’s dystopian novel. Through the director’s lens, the futuristic cityscape is gloomy and ominous, mostly unrecognisable to its real-life inhabitants. Yet those locations did exist. And looking at them today – the ones that haven’t been bulldozed, that is – you can see how creative Kubrick was with the setting, proving you don’t always need CGI to paint a near-future metropolis. Here’s how those locations have changed since then. 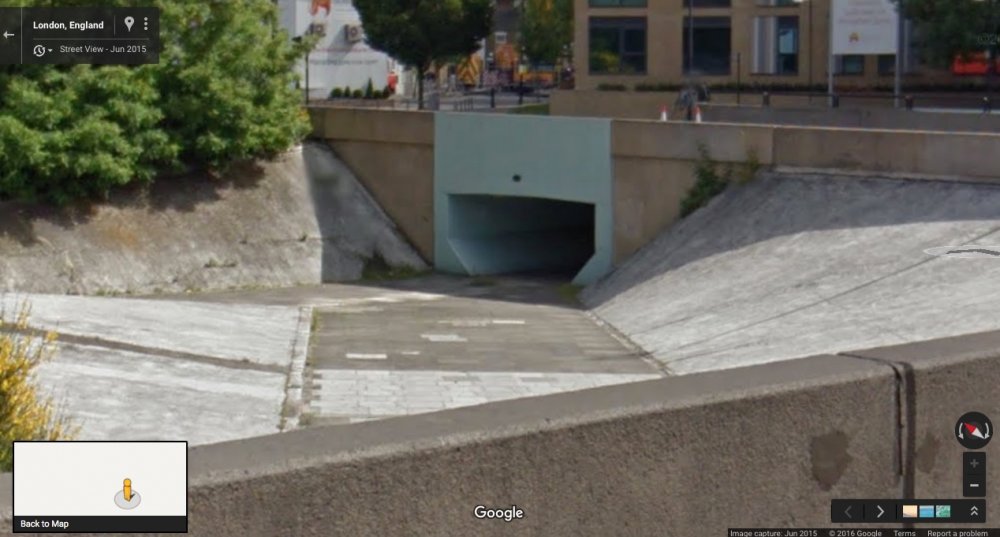 Alex and his ‘ultraviolent’ droogs find their first victim in an underpass beneath Wandsworth roundabout. Their long shadows loom ominously over a homeless man before they put the boot in. Kubrick littered the tunnel with bottles of booze and stubbed out cigarettes, but when the camera inches closer you can see that the concrete looks fresh, as if it were laid just a year prior. The underpass has since been painted a teal colour and the surrounding area is a bit patchy and tired-looking. But the location is not as sketchy as you might expect. Cars continually whiz around overhead, and the concrete banks have become a hotspot for skateboarders, BMX riders – and, of course, camera-wielding cinephiles. Regardless, Kubrick’s film is the reason you look over your shoulder when walking through underpasses like this at night. 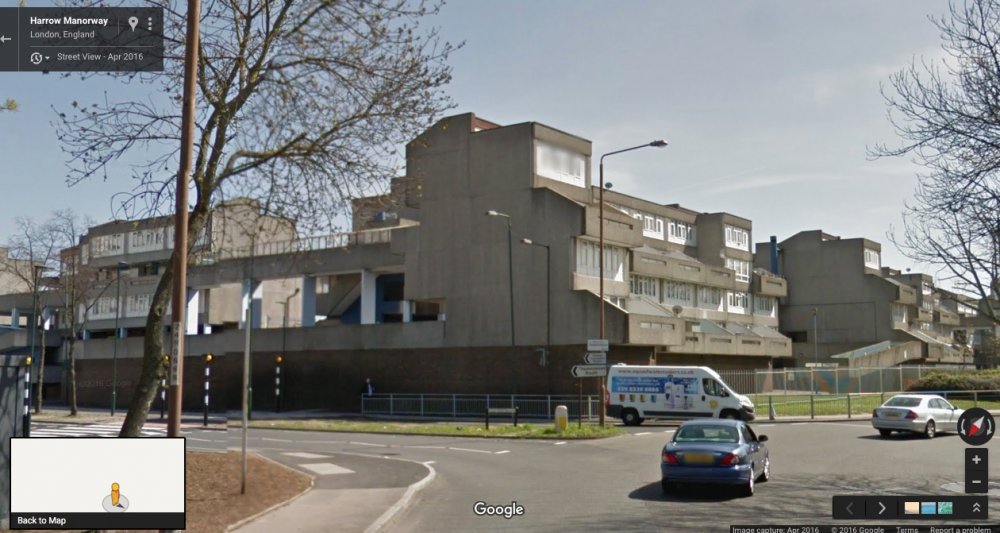 Thamesmead, a neighbourhood in south-east London comprised of vast concrete housing estates, was the location of Alex’s home, ‘Municipal Flat Block A’. You see him walking through the Tavy Bridge estate, surrounded by broken sofas and litter. And later you see him with his droogs on the edge of Southmere Lake, right before he wallops one on his codpiece. The area was a perfect fit for the dystopian shocker, with its maze-like network of elevated walkways and brutalist buildings. The high-rises seem even more fitting today, the film’s prescience more stark. That’s because the estates are so strongly associated with terrible urban planning and droog-like criminals in hoodies, thanks to the plethora of gritty social-realist films shot there in recent decades. According to the BBC, Thamesmead is also home to one of Britain’s most wanted motorbike gangs. Yet the buildings themselves, despite poor maintenance, remain strangely beautiful, piercing the skyline like an enormous concrete space station that’s fallen from the sky. 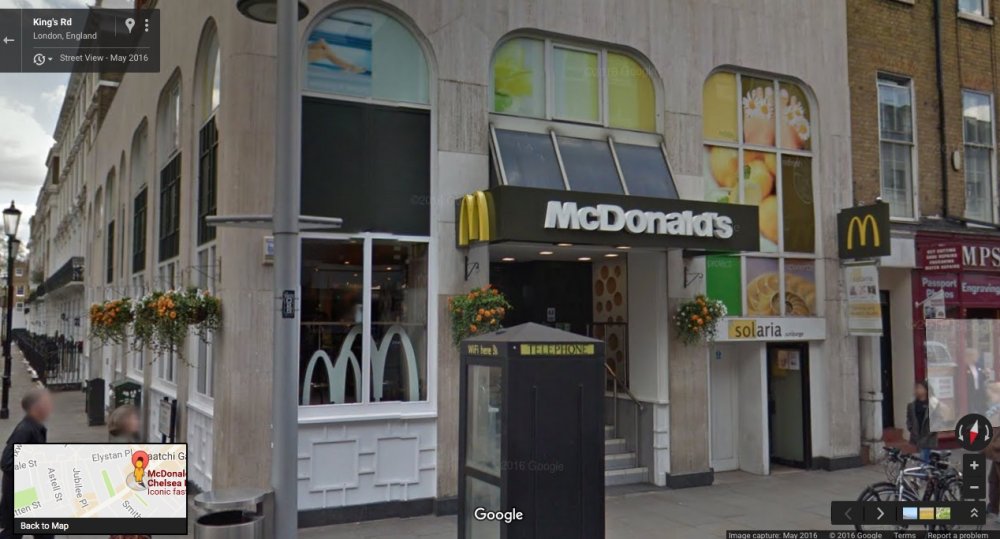 Believe it or not, Stanley Kubrick filmed in a McDonald’s. Only back then it wasn’t a McDonald’s; IMDb lists the location where he shot the record store scene as Chelsea Drugstore on the King’s Road. Kubrick transformed it completely, furnishing it with lollipop-coloured lights and stacks of records (not least the soundtrack to his own 2001: A Space Odyssey). The interior looks like a spaceship from a 70s TV show, all shiny surfaces and disco lights. You can see why he chose it, with its tank-like structure and its futuristic curves, the latter of which you can see on the exterior of the building today. Its basic retro-futuristic skeleton is discernible, even if the interior is adorned with the latest Big Mac meal deals. 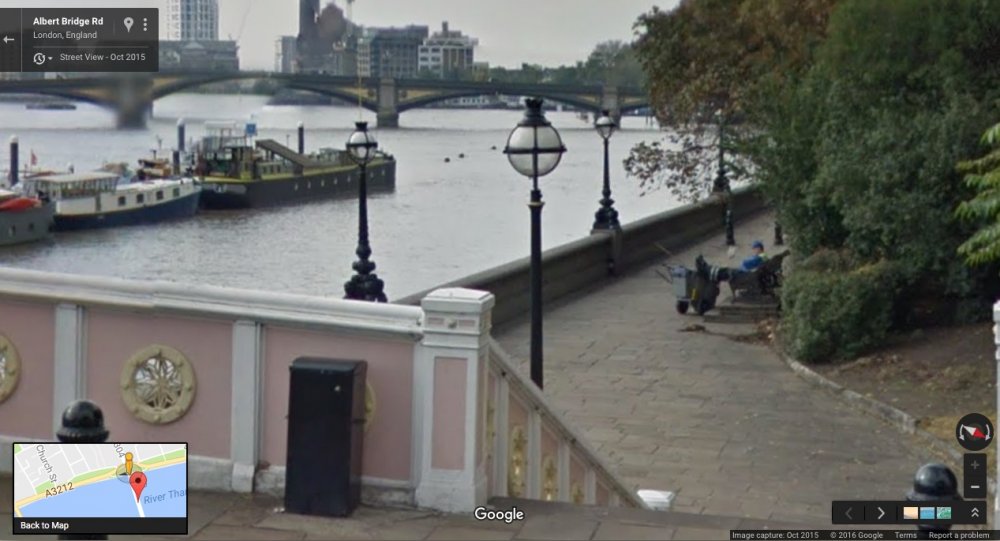 Another Chelsea location Kubrick selected was Albert Bridge. It’s the place where the homeless man takes his revenge on Alex. When Alex strolls along the riverside, newly reformed, you can see the south side of the river behind him, industrial towers looming in the distance. Four decades later, that skyline has completely transformed. Huge glass office buildings now line the river. No smog, no visible redbrick chimneys. The whole of Chelsea and the surrounding area has been cleaned up beyond recognition. No longer is it the heart of the London punk scene, and the bridge – also the place where Gwyneth Paltrow mopes in the rain in Sliding Doors (1998) – is an unlikely place to find a homeless man living. Let’s face it: you’re more likely to spot the camera crew from Made in Chelsea here today.

Some London locations didn’t make it to the 21st century. For example, the derelict hall where the early fight scene was filmed was located on Taggs Island, near Hampton Court. At the time of filming it had already fallen into disrepair, looking more like a bombsite than a glamorous music hall, and shortly after production it was demolished. In its heyday, before the Second World War, it was called The Karsino. It closed in 1940 and, despite repeated attempts to revive it, was bulldozed in 1971.

The ‘Duke of New York’ pub, which looked like a kitsch Austrian bar from the future, was the Old Leather Bottle in Stonegrove, Edgware. It was apparently a popular steakhouse in the 70s but then became associated with drug dealing. It was demolished in 2002 and replaced with shiny new flats. You’d never know Kubrick shot there. Which is kind of tragic when you think about it.