From sumptuous feasts to a simple cup of coffee, food in Hirokazu Koreeda’s films fuels the story as much as his characters. Here’s six examples of how the Japanese writer-director uses food to feed plot. 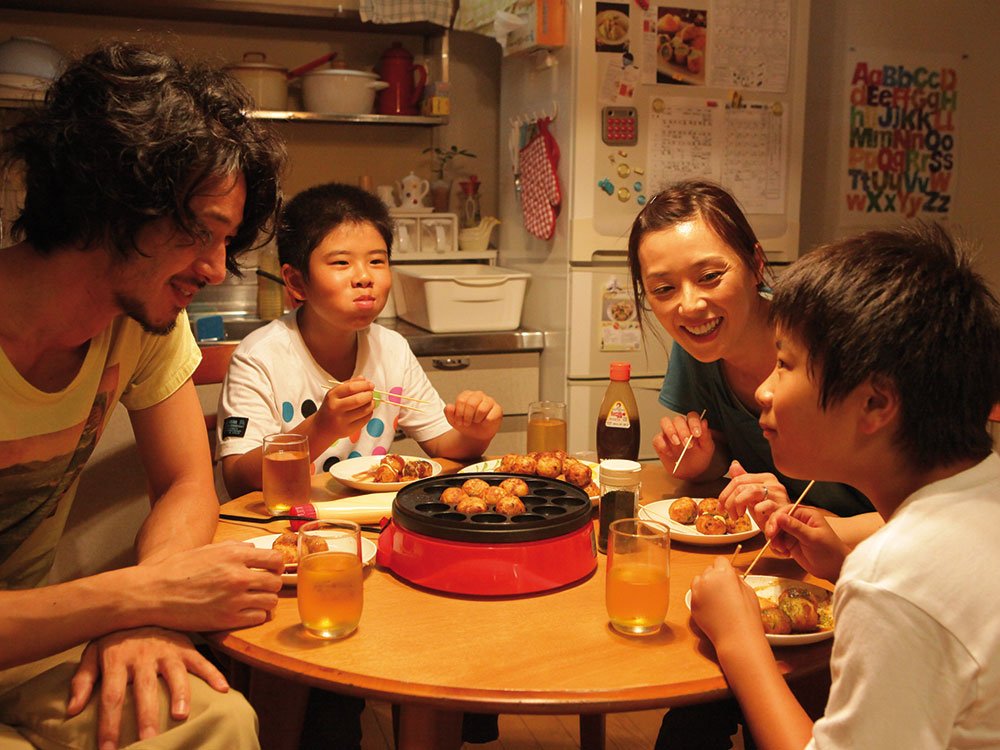 Maborosi is back in UK cinemas now.

Whether an elaborate family meal, a treat to welcome a guest or a much-loved recipe passed down through generations, food is used by Hirokazu Koreeda to both celebrate the pleasures of everyday life and convey deeper truths about the human condition. Here we explore the Japanese director’s use of food throughout his films and pick at the plates (and palates) of his protagonists.

“He popped in for a coffee and left,” the bartender tells Yumiko when she returns to her hometown years after her husband Ikuo’s tragic death. Hirokazu Koreeda made his debut in 1995 with this exquisitely rendered grief study. A young widow and new mother, Yumiko is nudged by her family towards remarriage, so relocates to a sleepy seaside town with her son and new husband. The coffee is the small detail about Ikuo’s last moments that triggers a second wave of grief as she grapples with the mystery of what lay beneath the surface of their ‘happy’ marriage.

“Taste good?” Akira asks his siblings, his face flush with pride as they slurp happily at hot ramen. Barely 12, he’s been left responsible for his younger brothers and sisters in a small Tokyo apartment. Based on the real-life Sugamo child abandonment case in Japan, Nobody Knows tugs heartstrings with its observational approach and the accomplished performances of its young cast. The plastic ramen pots slowly accumulate on their balcony. They’re repurposed as plant holders and become both a symbol of hope and a marker of time passing as it appears increasingly unlikely that their mother will ever return. 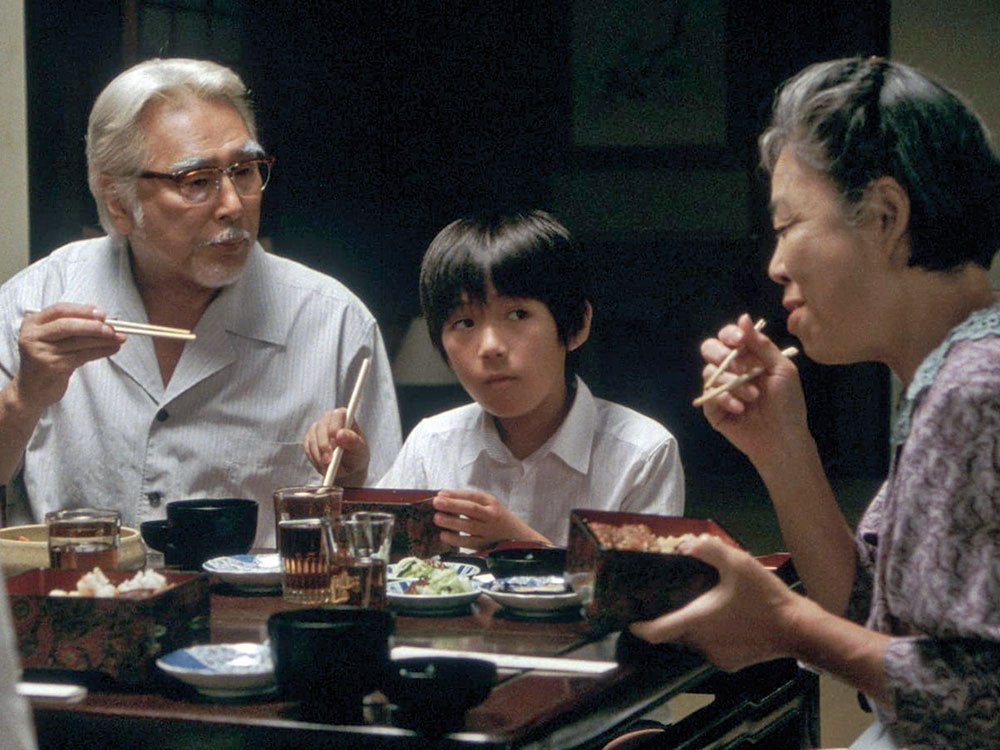 Still Walking opens with the sound of vegetables being peeled. Toshiko and her daughter exchange advice, gossip and affectionately tease each other as they chop, stir and sauté their way through a mouth-watering menu for a family reunion. In Koreeda’s hands, a sweetcorn fritter can be both a tasty snack made by a loving grandmother and a symbol of long-held resentment. Voices are rarely raised in this ‘family drama’, but with a moody patriarch, the ghost of a dead son and a new daughter-in-law in the mix, anything could threaten to tip the balance. 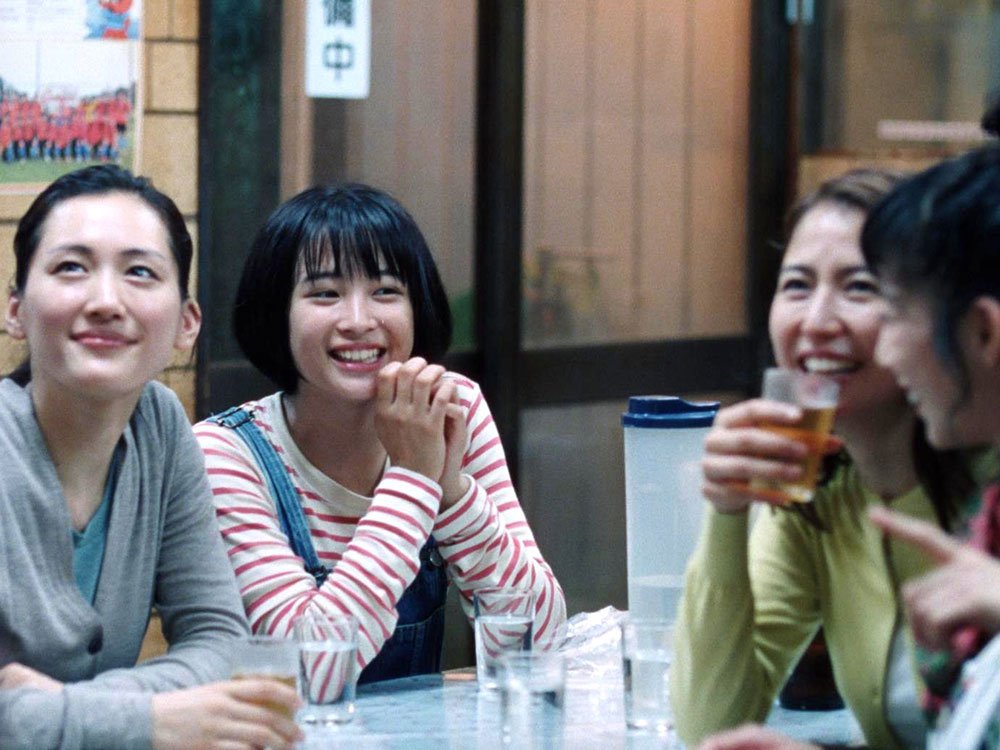 Sachi, Yoshino and Chika are three sisters who live, in a cosy bubble of dorm-like camaraderie, in their grandmother’s house. When they meet their orphaned half-sister Suzu at their father’s funeral they open their home and hearts to her. With an estranged mother and only hazy memories of their absent father, family traditions are now embodied in the food and recipes they happily share with their new sister, Suzu. As the four girls build a new life together, it is the fried mackerel, fresh whitebait on toast and glasses of home-made plum wine that provide the most immediate link between their past, present and future.

Ryota is a novelist turned private detective, with a gambling problem, issues paying child support and unresolved feelings for his ex-wife. When they cross paths to exchange custody of their son at his mother’s apartment one night, she invites them to stay for dinner and prepares a home-cooked meal for them, improvising with the ingredients at hand. For a brief moment they are a family sharing curry noodles on a rainy night. But as dinner turns into a sleepover, they are forced to decide what their shared future might look like. 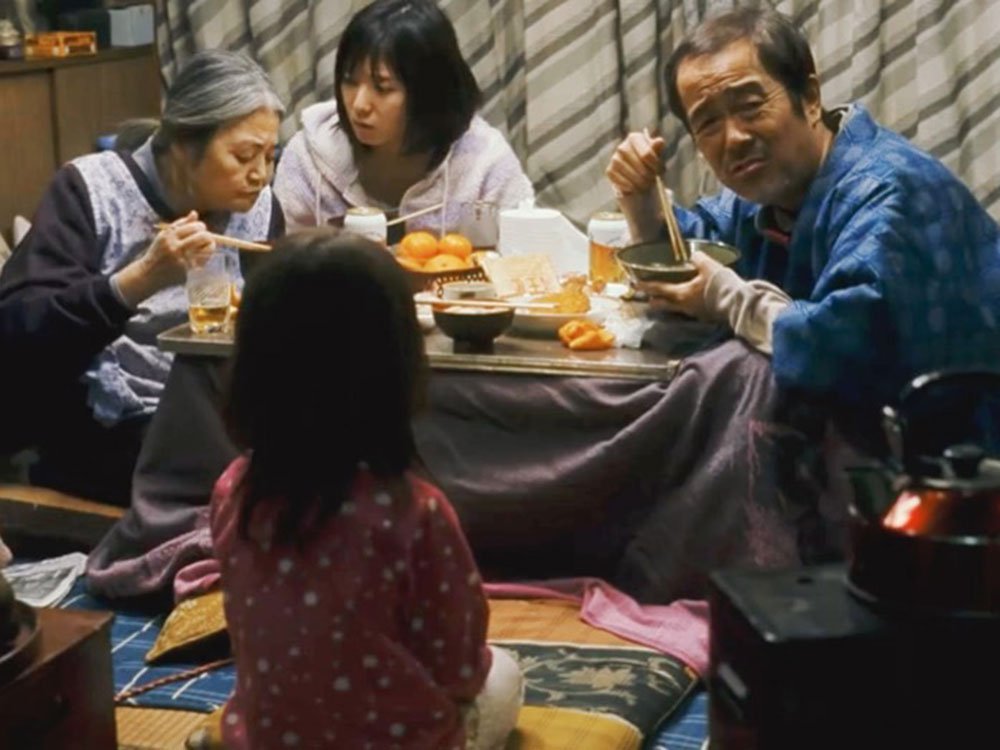 “Can’t you bring us home something to make us money?” In Shoplifters, Koreeda wastes no time in establishing how this particular family procures their meals. We meet Osamu and Shota in a brightly-lit supermarket where they are wandering the aisles with a basket in hand. Shota surreptitiously drops items into his rucksack while Osamu keeps guard. They buy some hot croquettes on the way home and – taking pity on her – offer shelter to a little girl left out in the cold. Those waiting at home aren’t especially pleased with the uninvited guest, but a few shared meals later, Yuri’s arrival has expanded their circle and their definition of family.