The hidden history of UK punks in 11 films

These rare films are a time capsule of the attitude, music and fashions that besieged Britain as punk took over. 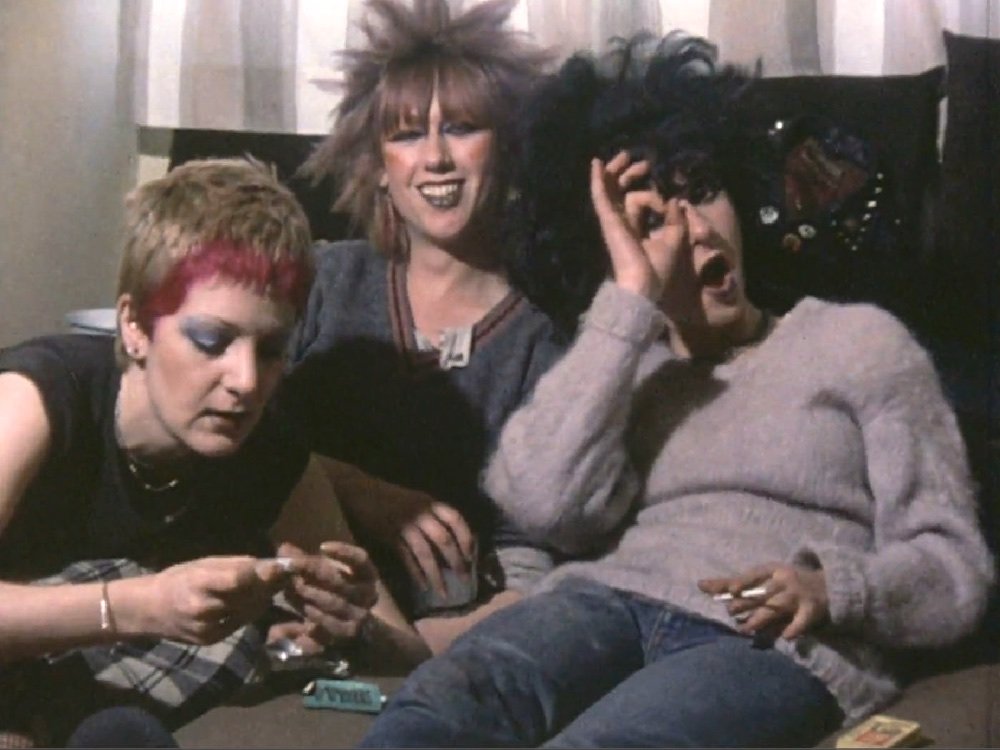 It can’t be a coincidence that punk exploded on to the streets of London like an incendiary device as the sun scorched down in the summer of 76, one of the hottest and driest since records began. Forty years on, the ferocious fashions, subversive sounds and angry ideas of those days remain as expressive, exciting and important as ever. Now, spike up your hair with spit and soap, and trip back through time on our chronological guided tour through punk on BFI Player, in the Other Grooves collection, with a fantastic fistful of free-to-view films capturing the sights, sounds and concepts that united kids all over the UK. Bondage trousers are optional.

Intermittently starring a pre-Pogues Shane MacGowan, seen taking his pet sheep on a delightful day trip to Buckingham Palace, there’s no better place to kick off our journey than with this provocative, power-packed, subversive in-your-face punk primer. It begins with the seminal movement-defining sound of the Sex Pistols performing their anti-forelock-tugging masterpiece ‘God Save the Queen’ (rumoured to have been denied the number one spot in the official music charts thanks to a conspiracy by the forces of conservatism), and continues with superb sounds from The Stranglers, and an incredible live performance by The Maniacs of their ace anti-dead-end-job aggro anthem ‘I Don’t Wanna Go to Work’.

A question: is this film a humorous history of meaty late-night snacks or is it, in fact, actually all about the exploitation of the working classes by the capitalists? Let your taste decide. And no chilli sauce for me, thanks.

One of the key chroniclers of the punk scene was Phil Munnoch, also known as Captain Zip, so-named because he favoured clothes that had a lot of zips on them. It’s logical. Armed with his trusty Super 8 camera, he could be found on the King’s Road, Chelsea (centre of punk operations), almost every Saturday, getting it all down on film for posterity – and thank heaven he did – as you can see in this fantastic film of London punk life as it happened in 1978, also featuring a fleeting appearance by fashion-legend Vivienne Westwood.

“Punk was an opportunity to dispense with all the rules,” the Captain says in his narration, “to poke your tongue out at everybody and be totally irreverent. It was a fresh start. A rebellion against denim, a rebellion against big collars, wide lapels, flares and Jason King.” Jason King, by the way, in case you didn’t know, kids, was a full-on 70s-style television dandy crimefighter character, who appeared in the show of the same name, grandly played by the ornately coiffed and hugely-moustachioed Peter Wyngarde. Every punk worth their salt hated Jason King, as well as old hippies, nostalgia, and any record recorded by the likes of Emerson, Lake & Palmer. Especially if it was a triple album.

Director Julien Temple was mates with the Sex Pistols and made their first film, Sex Pistols Number One (1977), as well as the later mockumentary feature that was built around them, The Great Rock ‘n’ Roll Swindle. In this snappy, stylish early short subject, he turns his unconventional camera eye on another of the fierce first wave of British punk bands, the UK Subs. Spoofing the style of British wartime propaganda films of the 1940s, this stylish music short includes, amid dynamite live tracks, a suitably stately narration on the punk struggle from velvet-voiced old-school voiceover man John Snagge. And keep your eyes peeled for eccentric Tenpole Tudor frontman Edward Tudor-Pole, manfully hamming it up underground.

A democratic, creative DIY ethic was an intrinsic part of the punk ethos, and homemade music and self-created style – the latter often involving the individual repurposing of some mass-produced item – were de rigueur for all serious trendsetters. This edition of Captain Zip’s Video Trip unflinchingly focuses on the white hot flame that was London fashion circa 1978. There’s drunken debauchery on street corners and at market stalls, as punks hassle straights for cigs and beer money, and go on a booze-fuelled jolly to 10 Downing Street.

Here you need not dream but will see all the key punk fashion staples, including – but not limited to – all the hair dye colours of the rainbow, the original Tampax earring, an awesome abundance of bondage trousers, outrageous swastikas and edgy iron crosses all over the shop, young chaps sporting natty green-neon socks, oodles of sexy skintight leopard print and slutty leather, tartan kilts and strides, cheeky chains, provocative padlocks, nasty looking DIY piercings, disgraceful studded dog collars, plastic trousers-a-plenty (careful with that fag end, love, or you’ll go up like a roman candle) and unsterilised safety pins a-go-go. After you’ve taken it all in, why not grab a black bin bag and some kitchen scissors, and have a try yourself.

As we continue our journey to the very heart of punk, we join a boozed-up band of switched-on scenesters as they eventually emerge from a King’s Cross squat to visit the legendary emporium Seditionaries, the one-stop shop for all the latest gear, and epicentre of London punk, famously located at 430 King’s Road Chelsea. Run by Malcolm McLaren and Vivienne Westwood, and previously known as SEX, this was the place to be seen buying (or shoplifting) the kind of clothes mentioned previously – as well as your essential pre-Kurt Cobain striped mohair jumpers, customised Seditionaries T-shirts, and smart ‘No Future’ armbands. And, music history fans, it was here that Johnny Rotten had auditioned to join the band that became the Sex Pistols.

Meanwhile, a short way across the water, in Ulster, a vibrant anti-sectarian punk music scene had developed around the legendary Good Vibrations independent record label and shop, founded by Terri Hooley in Belfast, and the influential live music venue The Harp Bar. This exciting, eclectic music documentary is crammed full of switched-on kids rejecting outmoded ideas and coming together united by great music. It features loads of terrific Irish punk rock groups – some well-known, some obscure, but all smoking-hot. The young, spotty, and thoroughly brilliant bands on offer here include The Undertones, Stiff Little Fingers, Victim and The Outcasts.

A special excursion now for some splendid fictional fun beside the seaside. Mouthy punk lads on their motorbikes find themselves up against some silent, sharply dressed new romantics in their Cadillac when they go after the girls they fancy in this neon-lit fun-park film shot on the coast at Great Yarmouth. Lots of dynamic driving, fairground riding and dashing about ensues, to the ace accompaniment of cold wave, post-punk, pop and electronica sounds – and there’s some classic nutty-boy ska dance moves to the marvellous music of Madness, too. One step beyond!

Return now to London after our exhausting day trip to the seaside. In this singular slice of Captain Zip-shot cinéma vérité, we meet a perky plethora of punk girls, lying about in their respective squats, possibly contemplating trips into town, or possibly not. Mostly they seem quite happy staying in, knocking back red wine like it was Ribena, swigging vodka (straight from the bottle, of course), scrounging baccy off each other, smoking endless ciggies, chatting, laughing, messing about for the camera, and generally having a lovely time. None of them make it out of the house.

You can see that Chelsea is changing in the last of Captain Zip’s video trips. Though we are undeniably in the presence of the stiffest, most marvellous mohican haircut ever known, and the brown beer bottles are still being passed around, the beginning of the end appears to have arrived for punk. New romantics are on the scene, wearing some outrageously outré clobber of their own, looking both slightly embarrassed and also like they’ve stumbled off a Dr Who set (Fifth Doctor era). Additionally, smart suits seem to be making an unexpected comeback, and apparently some proto-goths have taken up residence too. Meanwhile, predatory camera crews, eager for future library footage of first-generation Brit-punk’s last glimmerings, stalk the streets.

Some might say that by the time this film was made the glory days of punk were well and truly over – but certainly not for Peterborough-based band The Destructors, originally formed in 1977, and still powerfully plugging away in 1983, albeit with some changes in their line-up. Here we end our tour through punk as the boys get ready to play a show for their still-devoted followers in Brixton. “Basically,” confesses lead singer Neil Singleton, before he clears off to find some booze, “the band just means misery and financial hardship. But I get the kicks out of playing live.” You said it, brother. As anybody who ever played in a band will confirm, ’twas ever thus.

Edgy, erratic and uneven but endlessly thought provoking, Derek Jarman’s flamboyantly personal film sees the original Queen Elizabeth thrust forward through time into a post-apocalyptic urban wasteland of lawlessness and casual, vicious violence, where plastic punk rock is foisted upon the public by creepy media mogul Borgia Ginz. Toyah Willcox may be the best thing in it, blowing everybody else off the screen with her explosive performance as Monopoly-playing terrorist, singer and pyromaniac Mad. And always remember, folks, as Mr Ginz notes: “As long as the music’s loud enough, we won’t hear the world falling apart.”