Bears, penguins and dancing chickens: the most memorable animals in Herzog films

From the beasts of the jungle to the rats, cats and bats of Nosferatu, the films of Werner Herzog are full of the wonders of the animal kingdom. Here’s our guide to the legendary director’s movie menagerie. 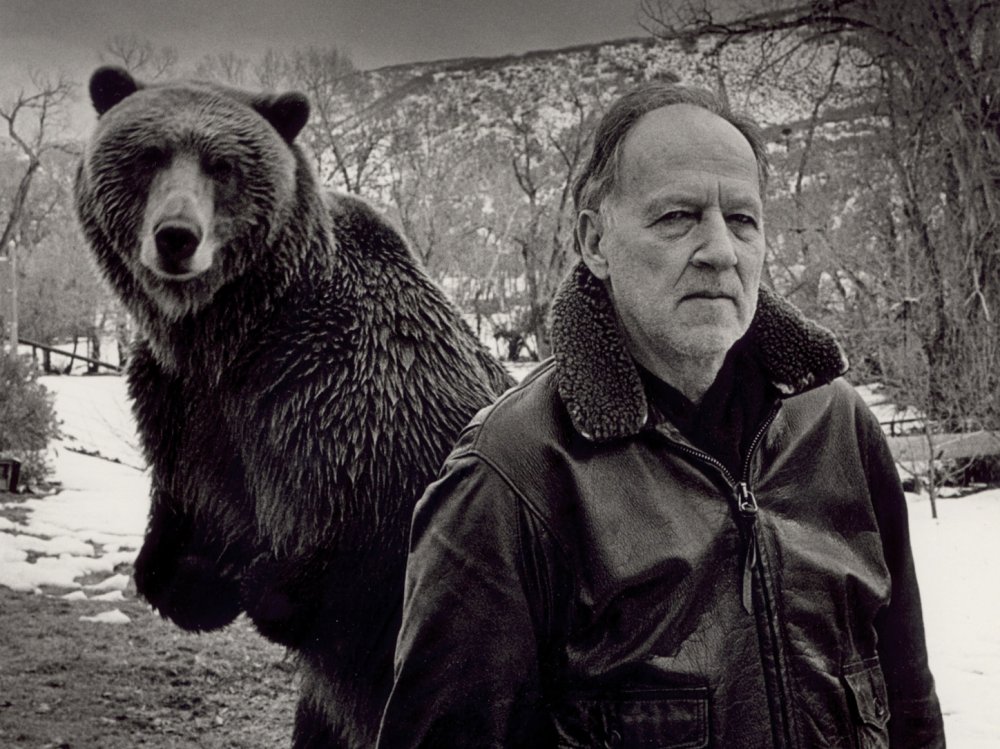 “Many of my films contain animals, but I have no abstract concept to offer that might explain how a particular animal signifies this or that. All I know is that animals have an enormous weight in my work, and some of the most hilarious performances I have ever seen are by animals, including those wacky television programmes where people send in videos of their crazy cat or piano-playing hamster.” – Werner Herzog

Herzog on… the desert fox in Fata Morgana 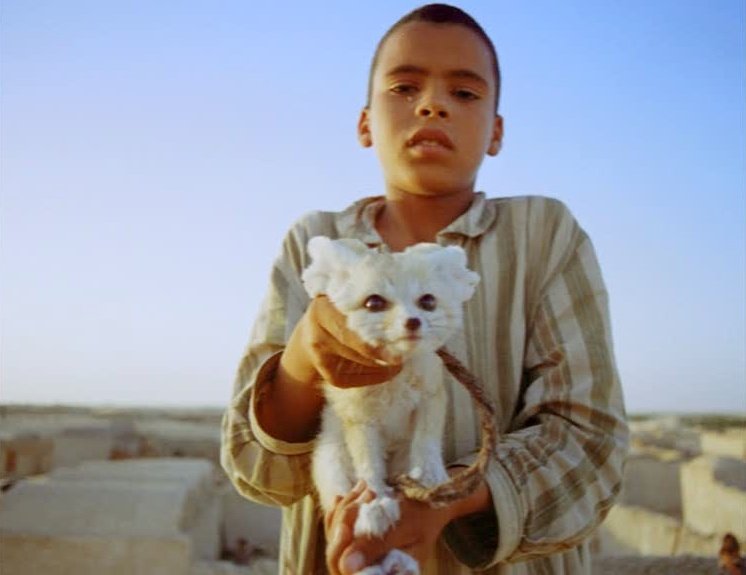 “This is a so-called fennec, a desert fox. A cute little animal. It looks like a puppy but it’s actually grown up. There was this kid who would hold it like this. It looked like a choking grip, but the animal wouldn’t stir. He just stood there and I kept filming him, and he didn’t know what was going on and I didn’t know what was going on. I like such moments of absurdity.” (DVD commentary)

Herzog on… the lizard in Fata Morgana 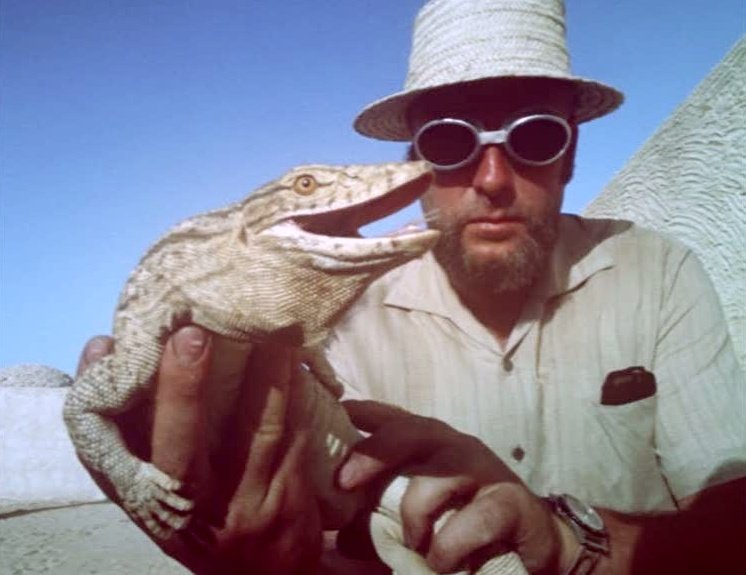 “A very strange lizard, a little bit like a small komodo. We met [this man] in the desert and he was very proud to show us that he was such an expert in these strange lizards. He was working in some kind of city administration in Berlin, as a clerk, but would take three or four months unpaid vacation just to run after these lizards in the desert, and dig them out in the sand. He complains how tough it is, and how hot is, and what difficult a fate he has chosen. He got bitten by the beast; his finger is bleeding, and flies are getting at him. They’re just vicious animals – I think very closely related to the dinosaurs.” (DVD commentary) 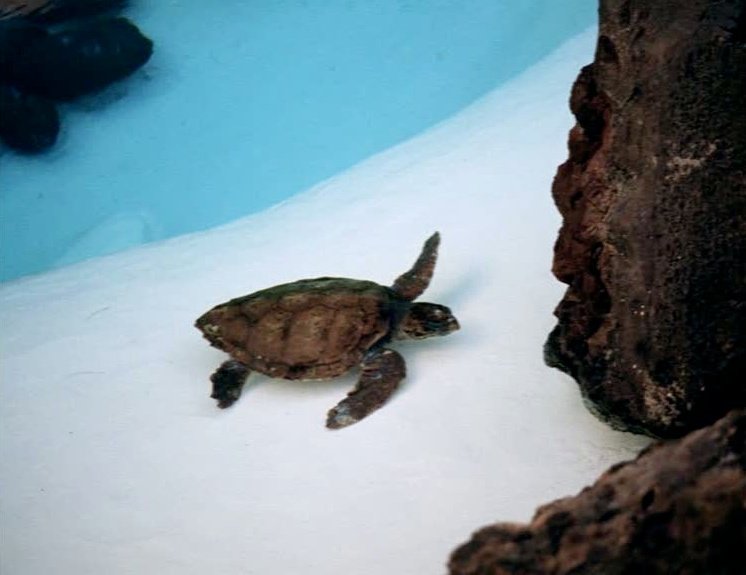 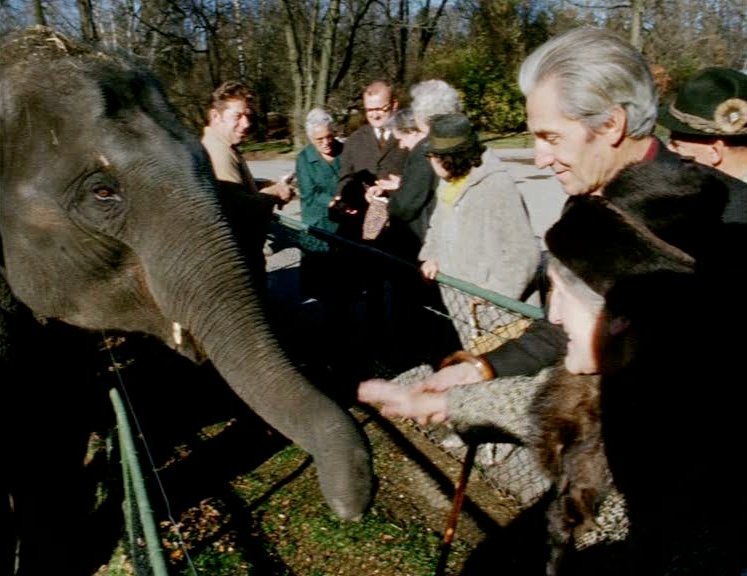 Herzog on… the sloth in Aguirre, Wrath of God 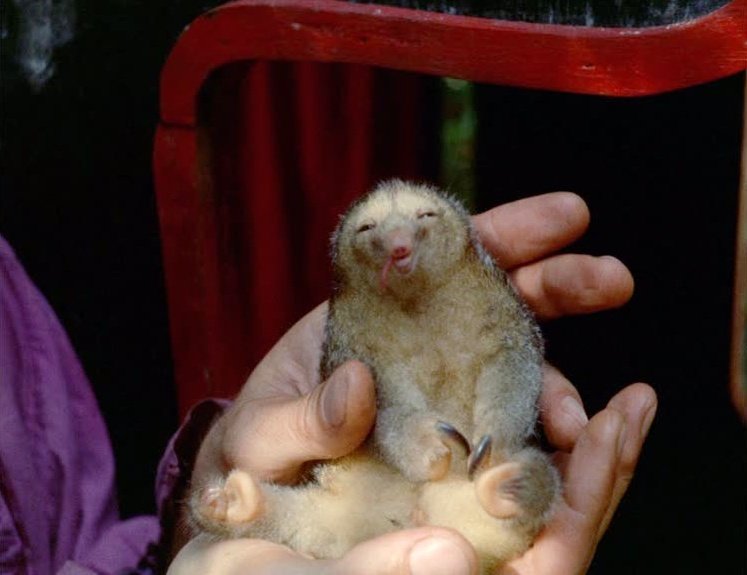 “[This is] a miniature sloth. Some sort of a midget type of sloth. Relatively rare. And I liked it because these animals sleep away most of their lives, and it’s a fascinating concept: to be in existence in the world and sleep most of your life!” (DVD commentary)

Herzog on… the mice in Aguirre, Wrath of God 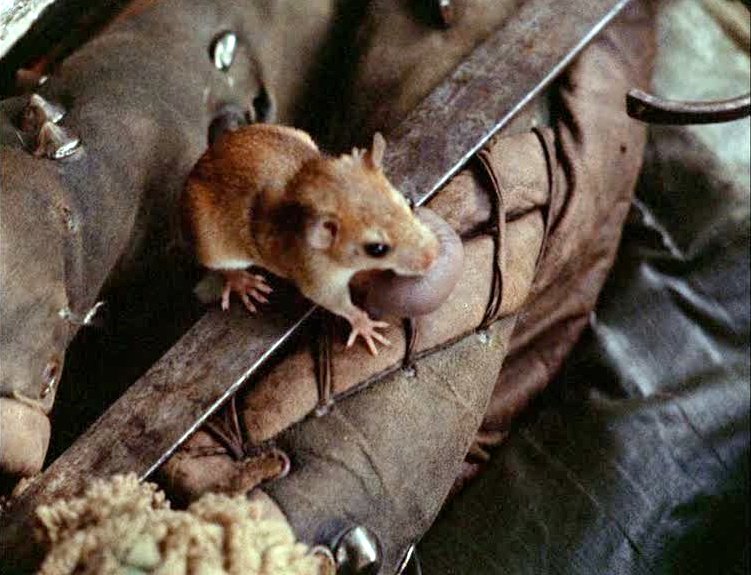 A mouse holding its young onboard the raft in Aguirre, Wrath of God (1972)

“We realised there were mice onboard, and young ones. And within seconds a camera turned around and shot this. You cannot organise it – not with tens of thousands of dollars of animal wrangling can you do something like this.” (DVD commentary)

Herzog on… the butterfly in Aguirre, Wrath of God 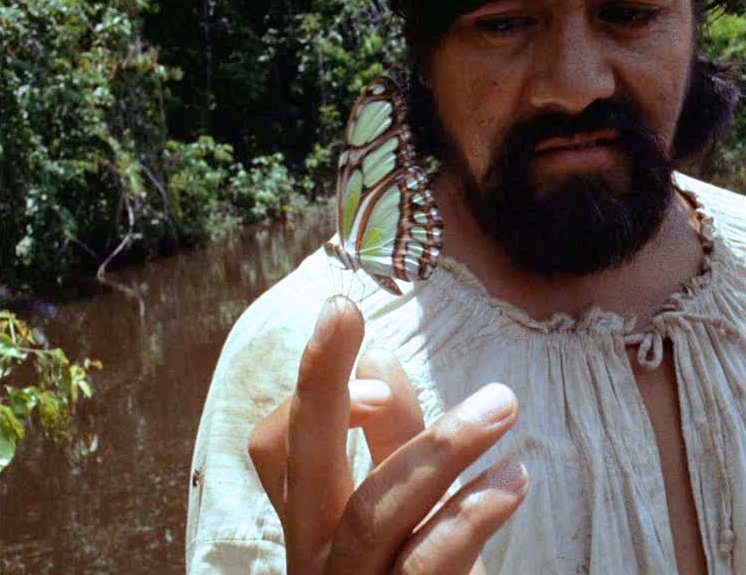 “[Aguirre, Wrath of God] becomes more and more strange now, and I take my time with a little scene with a butterfly. There’s something about nature there that’s within these men. We were so fortunate the butterfly sat on his shoulder.” (DVD commentary)

Herzog on… the monkeys in Aguirre, Wrath of God 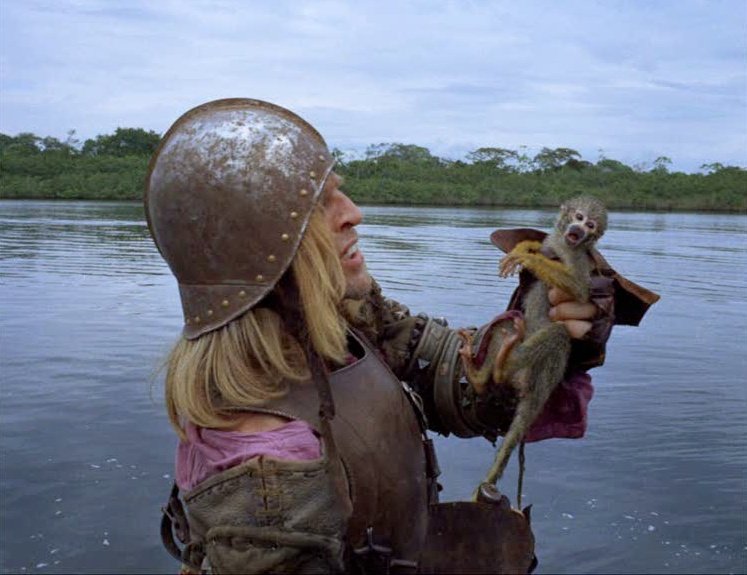 Klaus Kinski with one of the monkeys that overtake the raft in Aguirre, Wrath of God (1972)

“I had [400 of] them organised in Iquitos, the next big jungle town. I’d paid half the money for them because I knew that if I paid full price, the guys who were supposed to catch them would run off with the money. When I arrived there to pick them up, they were all sold again to a company in Miami. I found them at Iquitos airport, just being loaded in the plane and I shouted at the workers and I pretended to be the veterinarian and I shouted: “Where are the vaccination documents? These monkeys are not vaccinated.” They were quite embarrassed and unloaded the monkeys, and I took them away on a truck and packed them on a speedboat.”

“They were very, very nice, little, sweet animals. In this scene there was only the cinematographer Thomas Mauch and me onboard, apart from the actors. I grabbed into the monkeys because I would build huge clusters [of them], like under the cannon. I think I got bitten 50 times within five minutes or so. Some of them jump overboard and swim away. About 50 of them jumped in and swam and made it to freedom. All of the others were set free right after the shooting.” (DVD commentary) 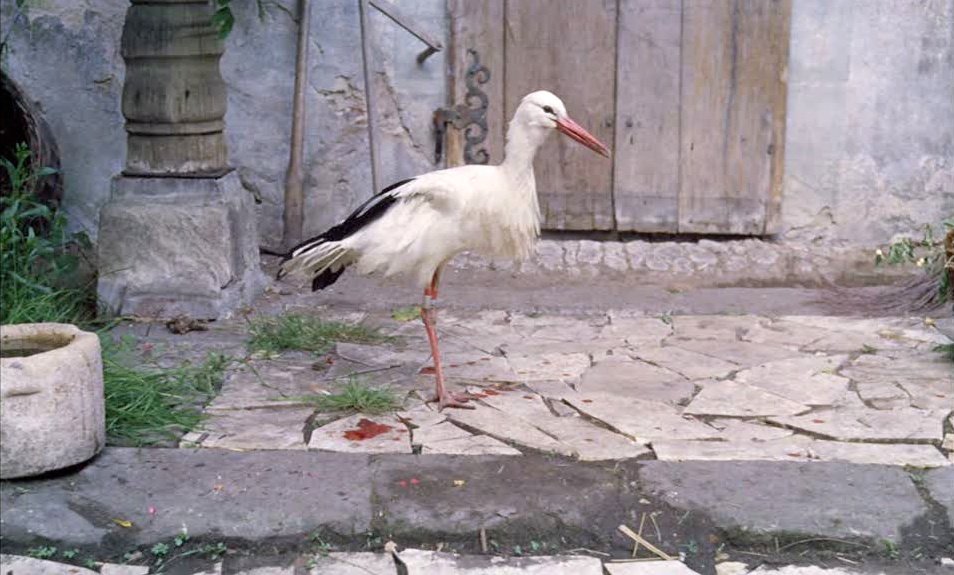 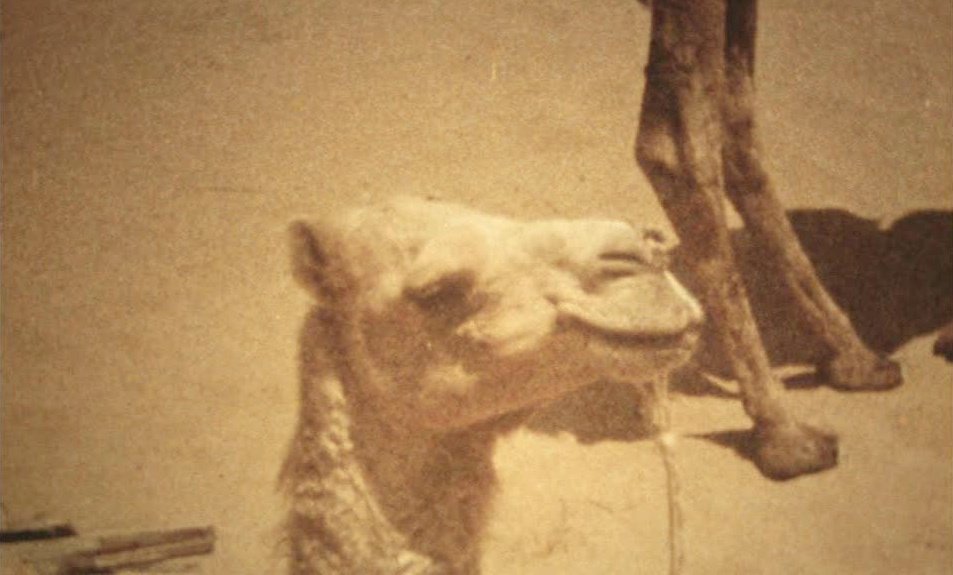 Herzog on… the duck in Heart of Glass 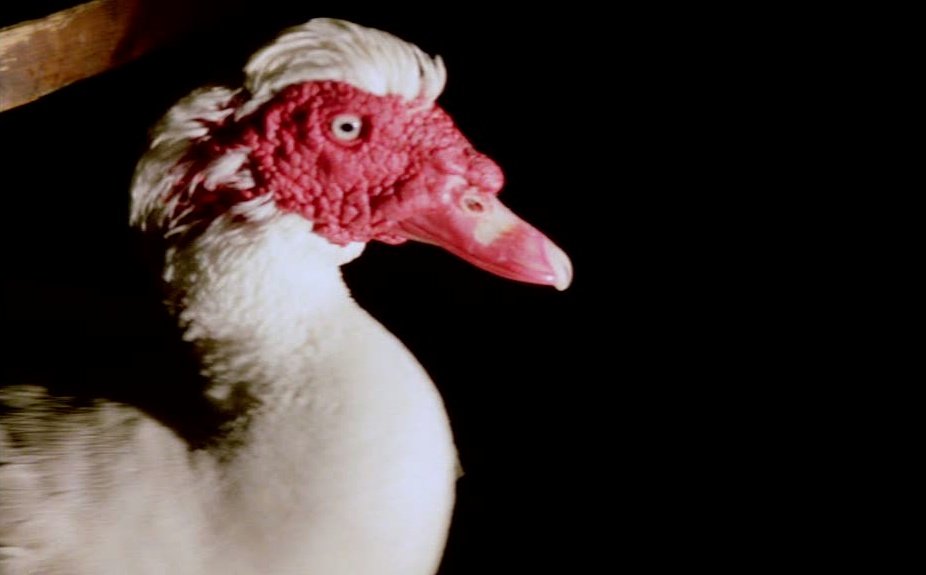 Herzog on… the dancing chicken in Stroszek 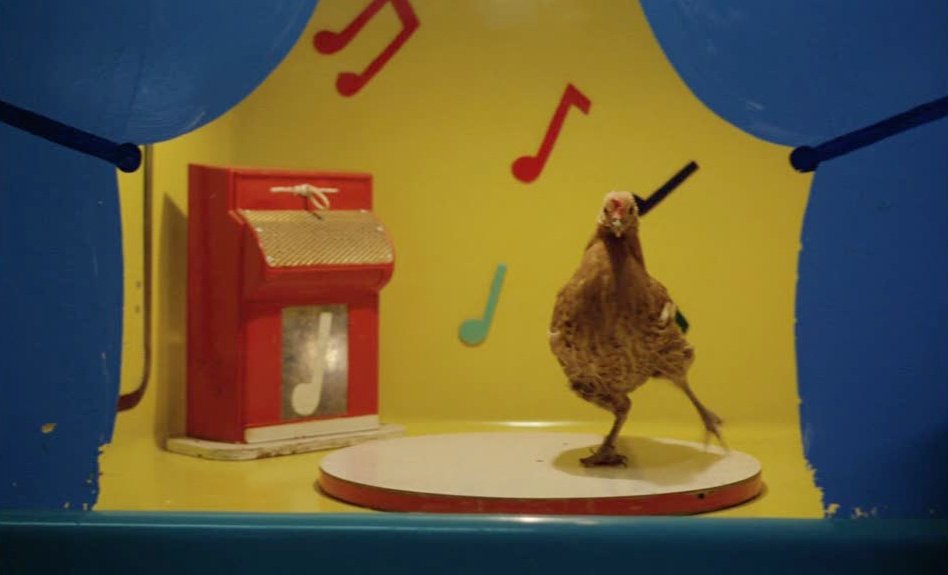 The dancing chicken in Stroszek (1977)

“People always remember the dancing chicken at the end of Stroszek. I encountered that freak show about 15 years before I made the film, at a Cherokee reservation in North Carolina, and couldn’t get it out of my head; I knew that one day I had to return and film it. … It’s a very bleak image, accompanied by the rather miserable feeling that if you came back a year later, the animal would still be there, dancing away.” (Werner Herzog: A Guide for the Perplexed)

“[Chickens] are very frightening for me because their stupidity is so flat. You look into the eyes of a chicken and you lose yourself in a completely flat, frightening stupidity. They are like a great metaphor for me… I kind of love chickens, but they frighten me more than any other animal.” – Werner Herzog

Herzog on… the bats in Nosferatu the Vampyre 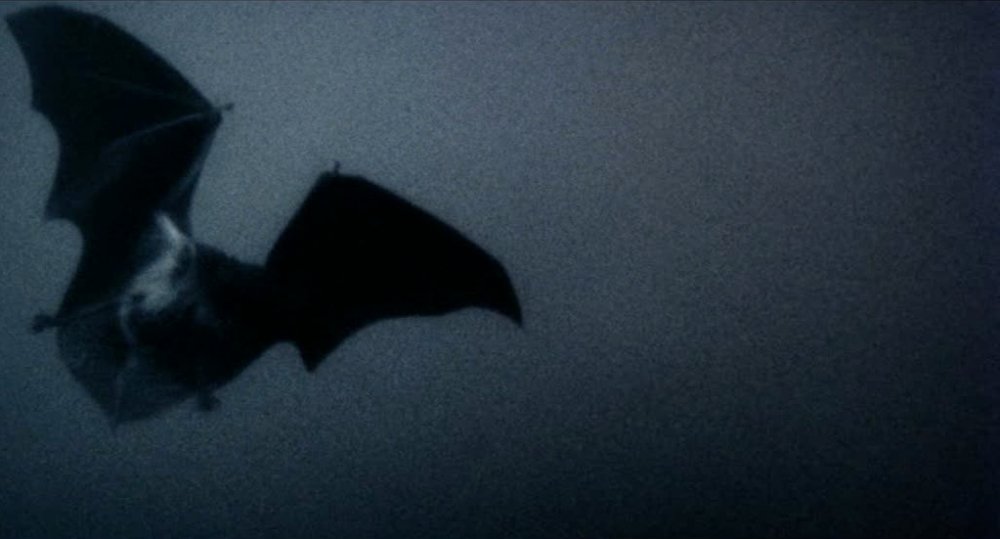 A bat in flight from Nosferatu the Vampyre (1979)

“Those are bats, which I did not shoot myself. I took them from a scientific film. Those bats are shot at 5,000 frames per second and you need enormous amounts of light.” (DVD commentary) 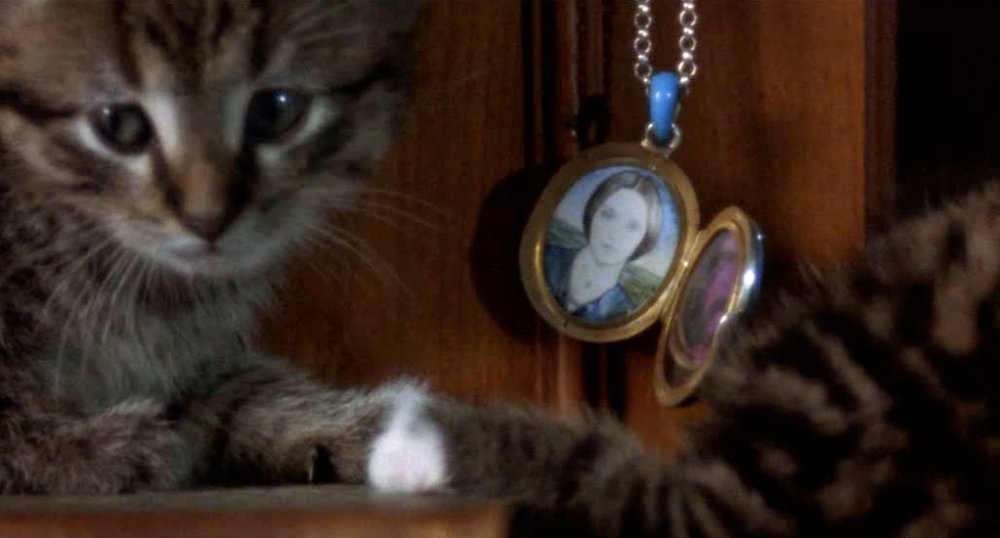 Herzog on… the rats in Nosferatu the Vampyre 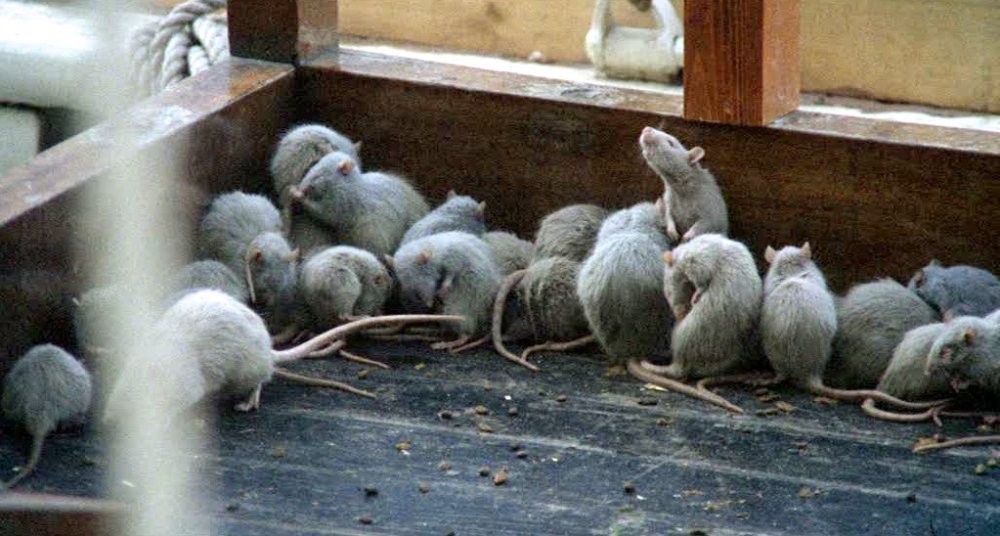 The plague of rats in Nosferatu the Vampyre (1979)

“[We used] 11,000 rats. They were snow white, so we had to dye them grey. Just a huge, huge venture. We had to transport them all across Europe from different countries: Germany, Austria, then into Holland… When the Dutch customs guys opened them, one of them fainted instantly. It took us 45 minutes until we brought him back!” (DVD commentary) 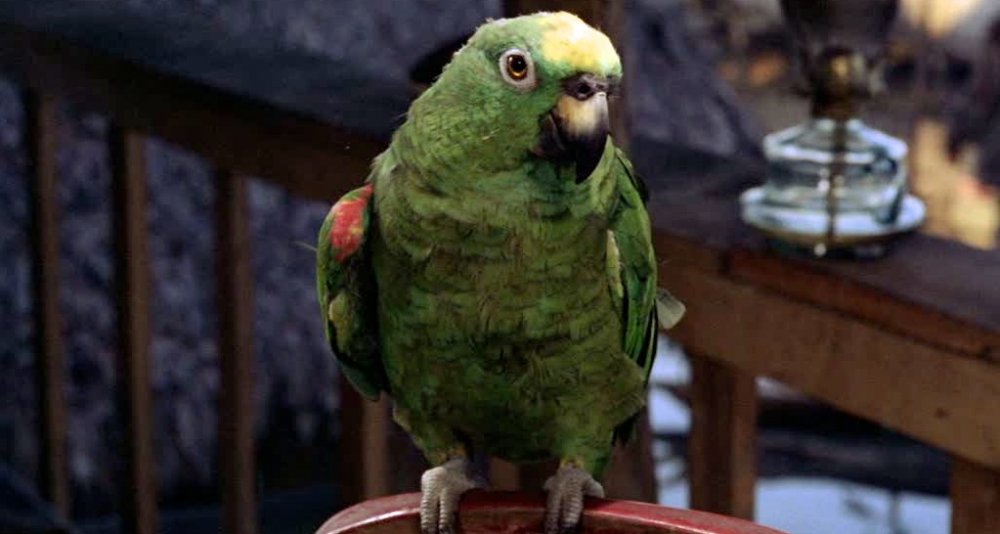 Herzog on… the ocelot in Fitzcarraldo 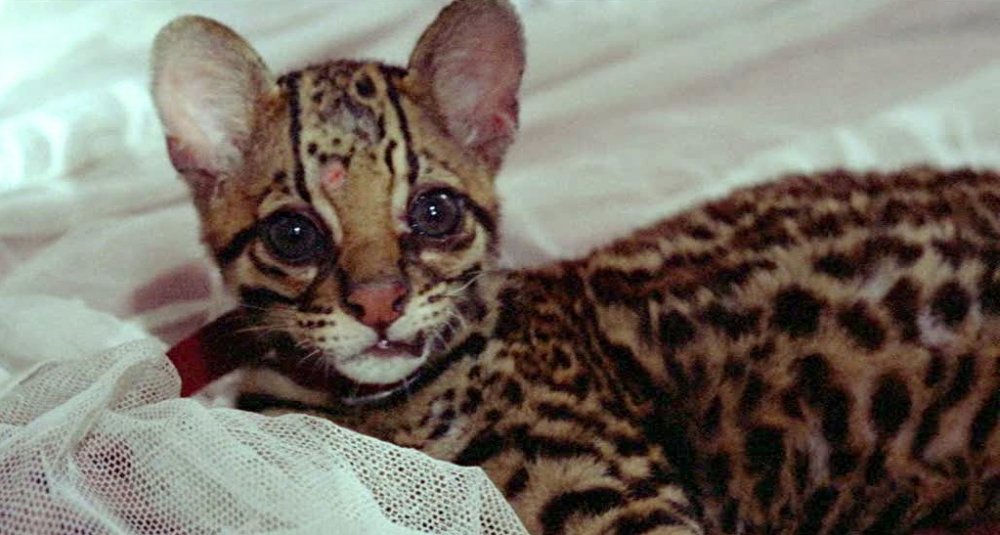 “The moment after we stopped the camera, Kinski exploded with rage because he had to touch this animal, which is an ocelot. It’s a very nice creature … [Kinski] was like Michael Jackson, somehow afraid of touching an animal. Very, very strange.” (DVD commentary) 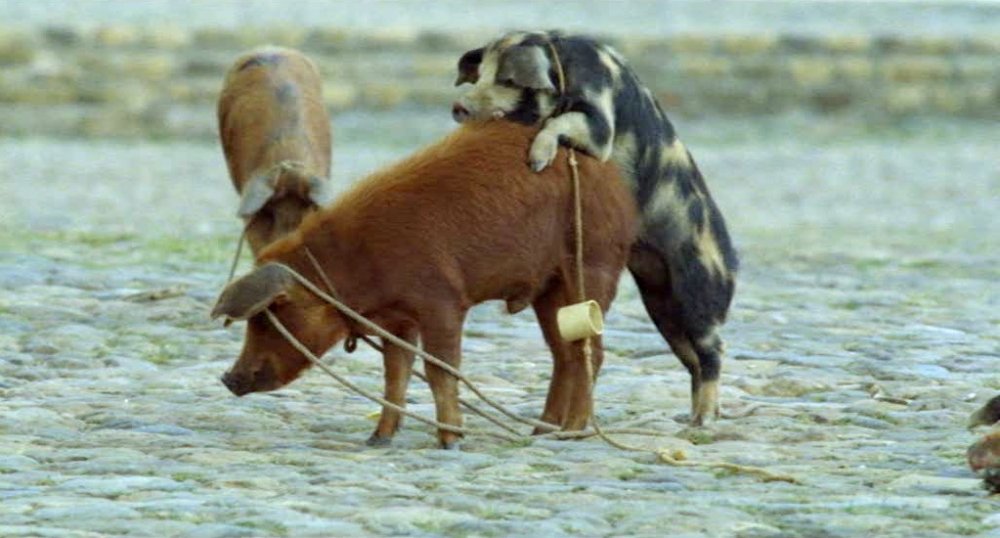 Herzog on… the crabs in Cobra Verde 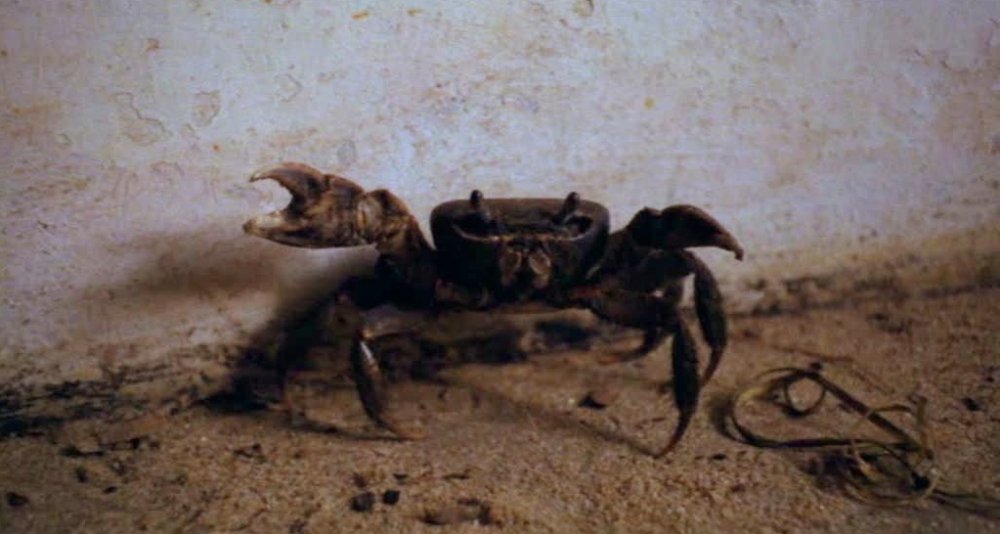 “There are certain things that are really scary for me, and it’s these kinds of crabs. There’s something robot-like and dangerous and scary.” (DVD commentary) 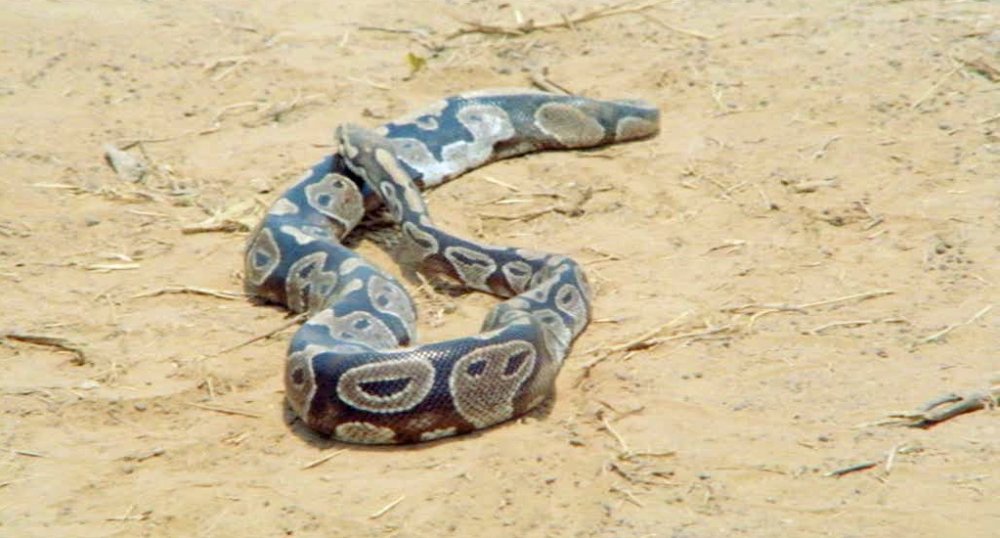 Herzog on… the bears in Grizzly Man 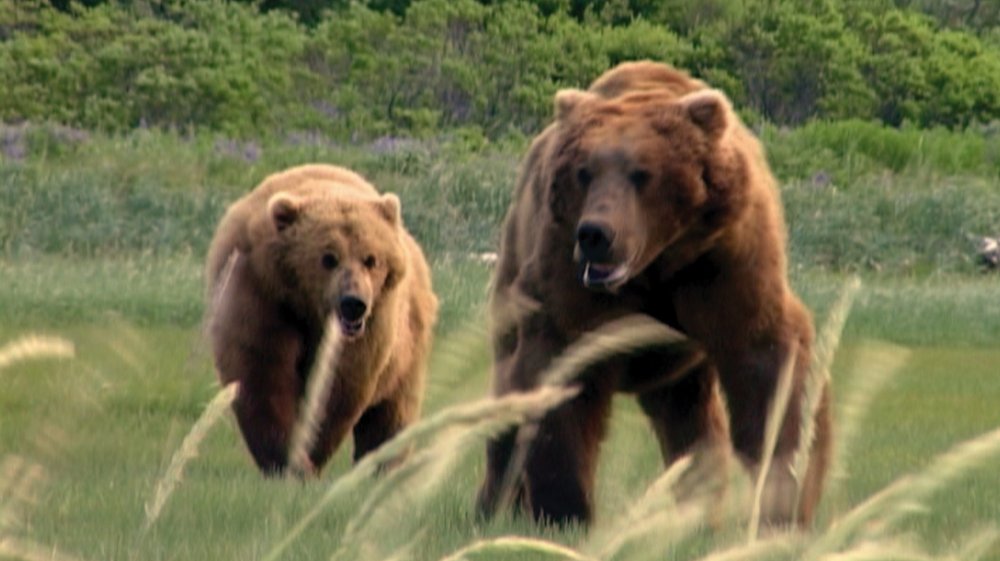 “Grizzly bears are basically uninterested in human beings as objects of prey; many more people in the United States die from wasp stings than bear attacks … The National Park Service has certain rules, one of which is that you have to remain 300 feet from any bear at all times, and a minimum of 450 feet from a female bear with cubs. What I did by getting so close to these creatures was a gross transgression and outright stupidity, not because it was dangerous but because it was disrespectful. Don’t love the bear. Respect the bear.” (Werner Herzog: A Guide for the Perplexed) 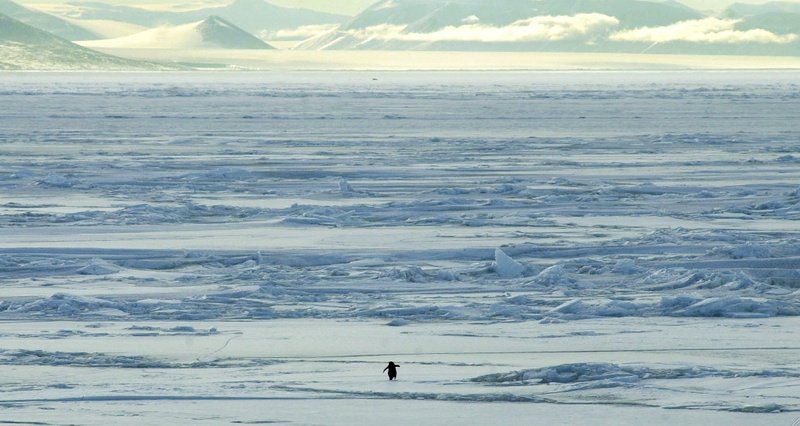 “These penguins are all heading to the open water to the right. But one of them caught our eye – the one in the centre. He would neither go towards the feeding grounds at the edge of the ice, nor return to the colony. Shortly afterwards, we saw him heading straight towards the mountains, some 70 kilometres away. Dr Ainley explained that even if he caught him and brought him back to the colony, he would immediately head right back for the mountains. But why?

“One of these disoriented or deranged penguins showed up at the New Harbour diving camp, already some 80 kilometres away from where it should be. The rules for the humans are: do not disturb or hold up the penguin. Stand still and let him go on his way. And here, he’s heading off into the interior of the vast continent. With 5,000 kilometres ahead of him, he’s heading towards certain death.” (from the film’s narration)

Herzog on… the iguana in The Bad Lieutenant: Port of Call – New Orleans 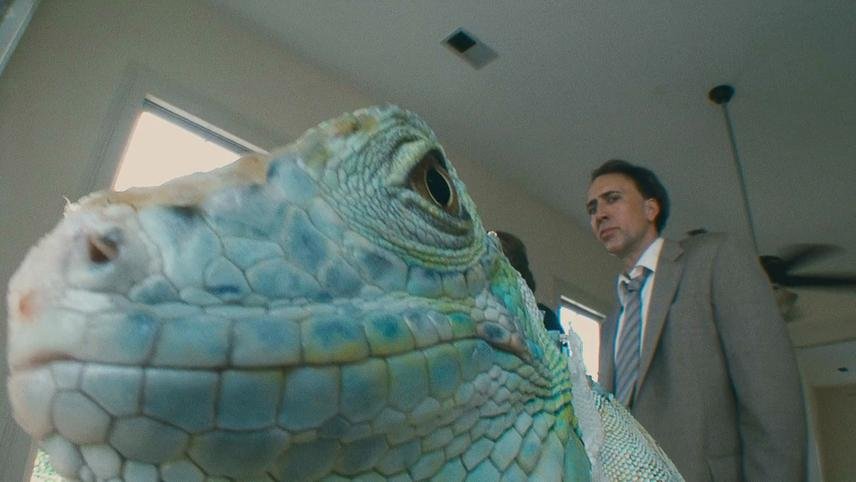 “The iguanas, which the bad lieutenant sees thanks to the drug haze he is under, were my idea. There is nothing more wondrous than seeing Nicolas Cage and a lizard together in one shot.” (Werner Herzog: A Guide for the Perplexed)

Herzog on… the albino crocodiles in Cave of Forgotten Dreams 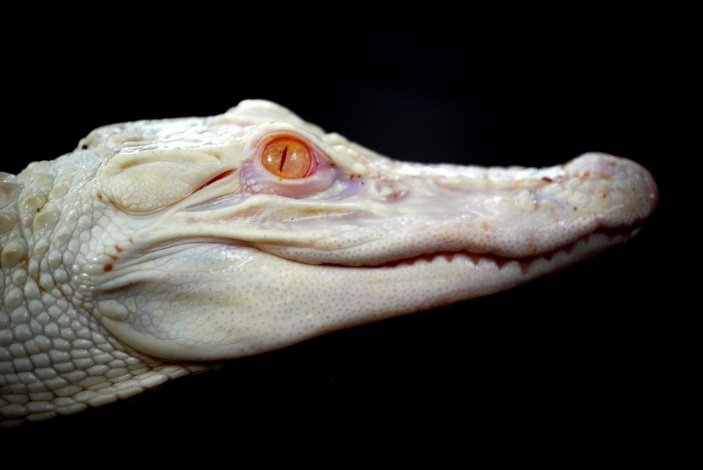 An albino crocodile in Cave of Forgotten Dreams (2011)

“The [albino crocodiles] are wonderful. They happened to be not too far away, on the Rhône river, near a nuclear plant. I didn’t even know they were albino crocodiles – I went there because I was just curious to see the 300 or more crocodiles. Right next to the entrance there’s this separate enclosure and I saw these two albino crocodiles – I could not believe my eyes and I said, ‘They have to be in the movie.’

“It’s pure science fiction, but of course related to the film. How do we see images that were made 32,000 years ago? How would an albino crocodile see images by human beings? Very, very strange, and for me a very deep question, of course. And, strangely enough, the film speaks about [the fact that] the site is widening and soon these crocodiles will reach Chauvet Cave and penetrate it – only four months ago a handful of crocodiles escaped from this compound. They were all recaptured with the exception of one, which is still at large somewhere in the French countryside. I really love that idea.” (Sight & Sound interview)

Related to Bears, penguins and dancing chickens: the most memorable animals in Herzog films