Heroic Bloodshed: How Hong Kong's style was swiped by Hollywood

In mid-80s Hong Kong, a new breed of blockbuster was born. It didn’t take long for Hollywood to demand a slice of the action. We chart the rise and appropriation of the gunplay genre that came to be known as Heroic Bloodshed. 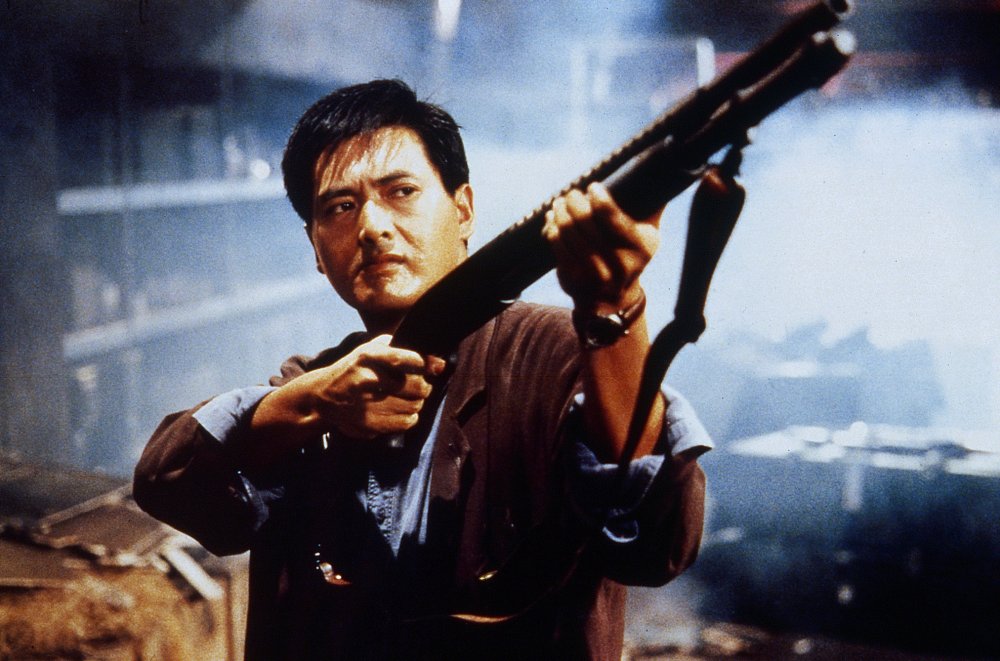 The yesterdays of A Better Tomorrow

Every origin story has a prequel. It was Rick Baker, editor of martial arts magazine Eastern Heroes, who in the late ’80s identified the emergent genre he called ‘Heroic Bloodshed’. This was a group of Hong Kong action films that replaced the traditional weapons of kung fu with guns and explosives. Its key proponents were directors John Woo and Ringo Lam, and producer Tsui Hark. The movement’s starting point is typically traced to a specific film, Woo’s A Better Tomorrow (1986). It’s a tale of two brothers, one a criminal (Ti Lung), the other a policeman (Leslie Cheung), and the strains on their fraternal bond as the former serves a prison sentence and attempts, against the odds, to forge a new future for himself.

With its focus on intense homosocial relations, its mix of action and melodrama, its characters’ strict moral codes, its stylised gunplay, and of course its introduction of actor Chow Yun-fat (playing the criminal’s old comrade-in-arms Mark Lee), A Better Tomorrow would, despite its relatively low budget and almost complete lack of advertising, make a record-breaking HK$34.7 million at the Hong Kong box office and, importanly, get a US theatrical release in 1990 after some festival play. Woo’s film set the template for a run of features, Asian or otherwise, that would chase its success by imitating its scenarios and stylings.

Not that A Better Tomorrow emerged from a vacuum. It was reimagining specific story elements from both Patrick Lung Kong’s The Story of a Discharged Prisoner (1967) and Hua Shan’s The Brothers (1979), itself a remake of Yash Chopra’s Indian crime drama Deewaar (1975). It was also clearly drawing inspiration from other sources, primarily (if not exclusively) American: the aggressive rhythms of hard-boiled fiction, the existential fatalism of film noir, the outlaw honour of the oater, the procedural doom of a Jean-Pierre Melville policier, the slick spectacle of France’s cinéma du look, and even the tough-guys-and-guns ethos of high-(fire)powered American ’80s actioners. Indeed, despite its forward-looking (English) title, A Better Tomorrow concerns men locked into past fates. Even Mark’s look in the film’s opening scenes – a duster and Alain Delon sunglasses – announces a man as much out of time as out of place. 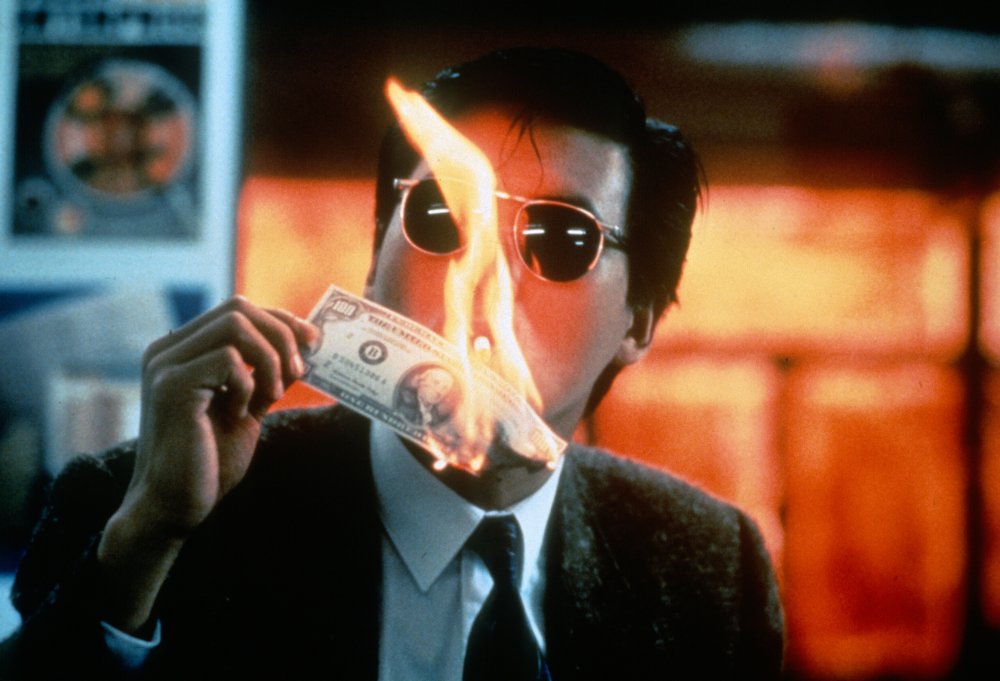 Yet if the constituent parts of A Better Tomorrow were hardly original, their specific recombination would go on to have its own influence on cinema. For as well as engendering all the conventions of the Heroic Bloodshed genre, A Better Tomorrow would spawn remakes from India (Sanjay Gupta’s Aatish: Feel the Fire, 1994) and Korea (Song Hae-sung’s Invincible, 2010), as well as two sequels (Woo’s A Better Tomorrow II, 1987 and Hark’s prequel A Better Tomorrow III: Love and Death in Saigon, 1989). Chow’s Mark dies at the end of A Better Tomorrow, but he was to prove such a popular character that Woo would bring a version of him back in his sequel in the form of his identical twin brother Ken.

In one of the sequel’s scenes, Ken (also played by Chow) encounters a group of young Chinese males dressed in Mark’s characteristic duster and sunglasses, and refers explicitly to the fact that they are imitating his late brother’s look. This was in fact commentary on a real-world phenomenon, as Mark’s costume became all the rage among Hong Kong’s male youth (despite the local sub-tropical climate), giving rise to a slang Cantonese term for ‘trench coat’ (Mark Gor Lau) named after Chow’s character. Yet what is significant here is that Ken is chatting with the boys in his Chinese restaurant not in Mong Kok but in New York City. It is as though Woo was acknowledging an awareness that his new brand of cinema was ripe for export to the US (from whose homegrown cinema he had himself freely borrowed). In the course of A Better Tomorrow II, Ken returns to Hong Kong and, donning Mark’s old, bullet-riddled coat, reduplicates the gun-toting cool of his brother from the first film. The sequel closes on Ken’s restaurant staff awaiting his return to New York. They would not have to wait long – for Heroic Bloodshed was already well on its way to America. Tomorrow had arrived. 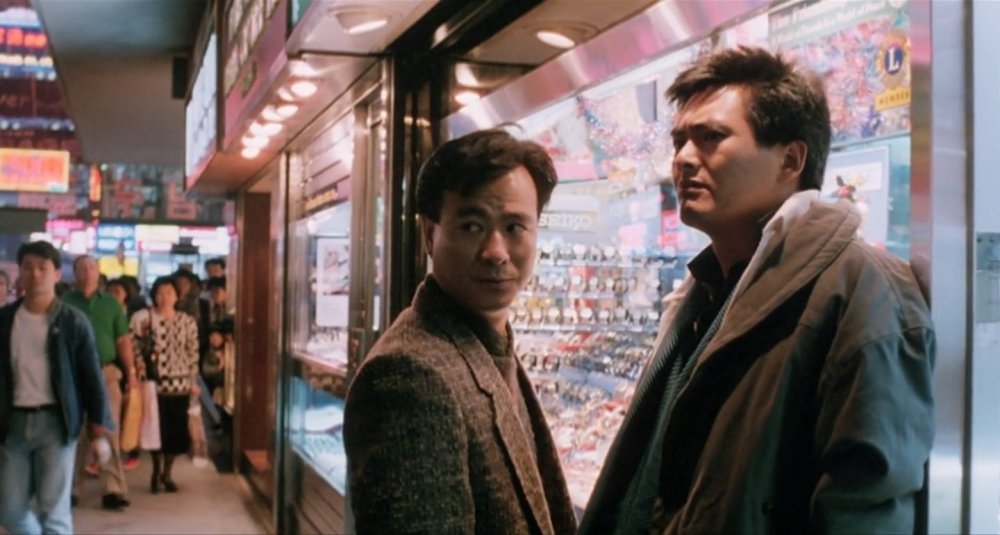 Ringo Lam’s City on Fire (1987) made no secret of the fact that it was capitalising on the successful formula of A Better Tomorrow. For, much as Woo’s film placed Chow Yun-fat in a neo-noir netherworld of cops and robbers, City On Fire – also starring Chow – unfolds in a similar milieu of dark streets, smoky clubs and jazzy saxophone, evoking a Hong Kong demimonde that matches the shadowy status of Chow’s undercover cop Ko Chow. Lam’s film, however, is less artificial in its stylisations than Woo’s and grittier, as Ko Chow finds himself sympathising more with the cop killer Fu (Danny Lee), whose gang he has infiltrated, than with the torture-happy cops who treat him like a subhuman. These conflicted allegiances will ultimately tear Ko Chow apart during a botched jewellery store heist.

Lam’s film was actually one of the first in the Heroic Bloodshed genre to be translated into American idiom. The final 20 minutes of its plot, covering a messy robbery and an even messier division of thieves’ loyalties, is easily recognisable as the narrative spine of Quentin Tarantino’s feature debut Reservoir Dogs (1992). Tarantino may mess with Lam’s chronology, add some very funny dialogue and rich characterisation, shift the torture perpetrated by police in Lam’s film to torture perpetrated against police, and throw in magpied references to, inter alia, Kansas City Confidential (1952), The Killing (1956) and The Taking of Pelham One Two Three (1974) – but nonetheless the whole shape of the film is closely informed by the climactic sequence of City on Fire, right down to the undercover policeman (Tim Roth) injured in the belly, and the Mexican stand-off in a hideout. Tarantino was about to change American independent cinema forever – and he imported Heroic Bloodshed as backup for his arrival. Meanwhile, the rest of Lam’s film, with its undercover cops trapped in their assumed identities, was also a precursor to Andrew Lau and Alan Mak’s Infernal Affairs (2002) – itself remade by Martin Scorsese as The Departed (2006). Tarantino would himself return to Hong Kong cinema for material from a different genre – Shaw Brothers’ kung fu movies – for his Kill Bill: Vol. 2 (2004). 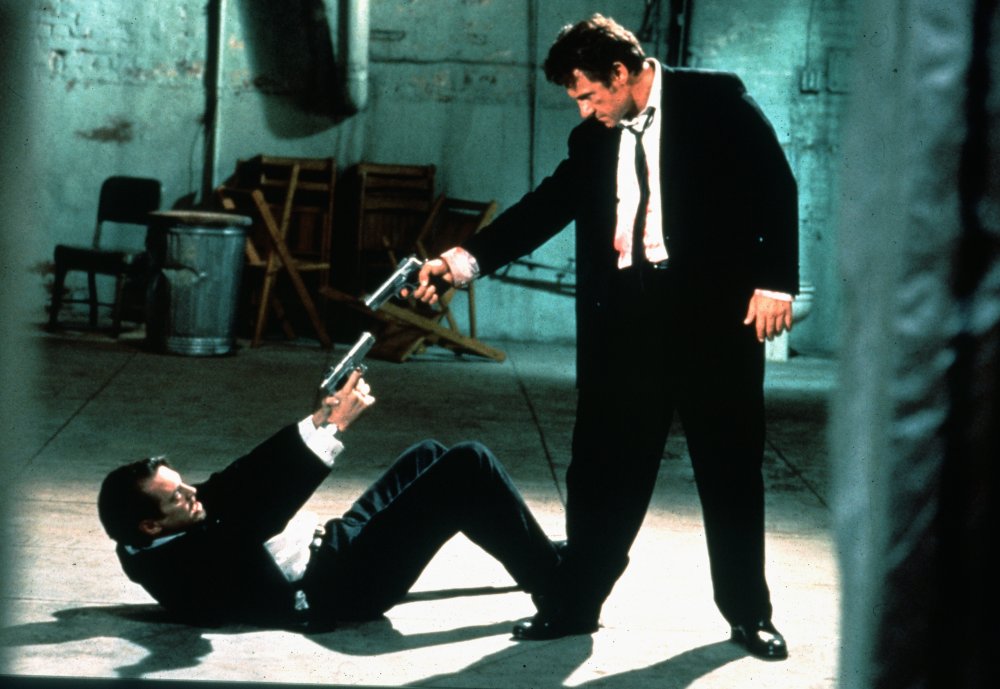 “In his 30s. Some crow’s feet. He has a manly air about him. He’s a bit different from the average assassin. He’s very calm. Quite intelligent. His eyes are very alert. Full of compassion. Full of passion.”

This is the rather odd description that Detective Li Ying (Danny Lee again, this time working for the other side of the law) gives to a police sketch artist, as he describes Triad assassin Ah Jong (Chow Yun-fat) in John Woo’s The Killer (1989). You can almost hear in Li’s voice the admiration, even love, that he has for his enemy. Ah Jong is both a meticulous, stone-cold murderer and a good guy who is willing to risk everything to pay for the eye surgery of the nightclub chanteuse (Sally Yeh), who has become his collateral damage. Ah Jong is modelled on the classic outlaw hero of the western: he plays the harmonica, like Charles Bronson’s gunsmith in Once upon a Time in the West (1968), and, in the climactic scene, he and Li will burst out of a church to face an army of gunmen, like Butch Cassidy and the Sundance Kid (1969) – right down to that film’s signature freeze frame.

With his effortless cool and old-world, matinee charm, Chow perfectly embodies Ah Jong’s contradictions of character so that we can remain in sympathy with a contract assassin. The Killer was obviously an inspiration for Luc Besson’s English-language Léon: The Professional (1994). Yet it would not be long before Hollywood would pay attention not just to the tropes and mannerisms of Heroic Bloodshed, but also to the genre’s poster boy.

Chow would have his American debut in Antoine Fuqua’s The Replacement Killers (1998), executive produced by Woo. This film reimagines The Killer in Los Angeles – with Chow effectively reprising his role as the killer with a conscience – and its  title slyly references the alterations and substitutions required to translate Woo’s film. For Chow’s character, while engaging in all the usual hyperbolic gunplay, is now teamed with Mira Sorvino’s forger Meg Coburn. This is a considerable shift for Heroic Bloodshed from its usual focus on homosocial bonds, and the concomitant marginalisation of its female characters. Meg is that rarity in this genre, a fully realised, complicated heroine – although it is a pity that Chow and Sorvino fail to conjure much chemistry between them. 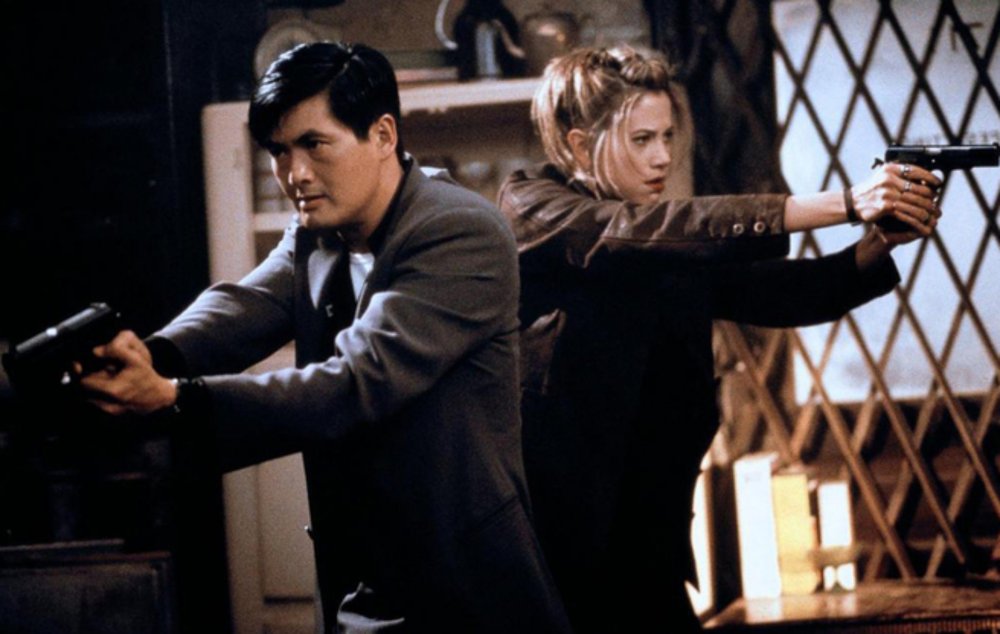 “Give the guy a gun and he’s Superman. Give him two, and he’s God!”

These words are said of Inspector ‘Tequila’ Yuen (Chow) in Woo’s Hard-Boiled (1992), and they shoot to the heart of Woo’s action aesthetic: the slow-motion vision of a character flying through the air while firing guns from either hand is among Woo’s signature motifs, along with having the camera circle around a gun-toting character, and showing two characters pointing guns at each other’s faces. This gunplay grammar would eventually find its way into Hollywood action films.

While, for example, there are no obvious Woo-isms in Michael Bay’s buddy cop comedy Bad Boys (1995), by the time he made the sequel, eight years later, Bay had fully assimilated Woo’s time-freezing, multi-angle take on shootouts. It is also evident, long before that, in films as early as Kathryn Bigelow’s zeitgeist-surfing undercover thriller Point Break (1991), and later in the balletic bullet duels between Neo (Keanu Reeves) and Agent Smith (Hugo Weaving) in the Wachowskis’ The Matrix (1999). 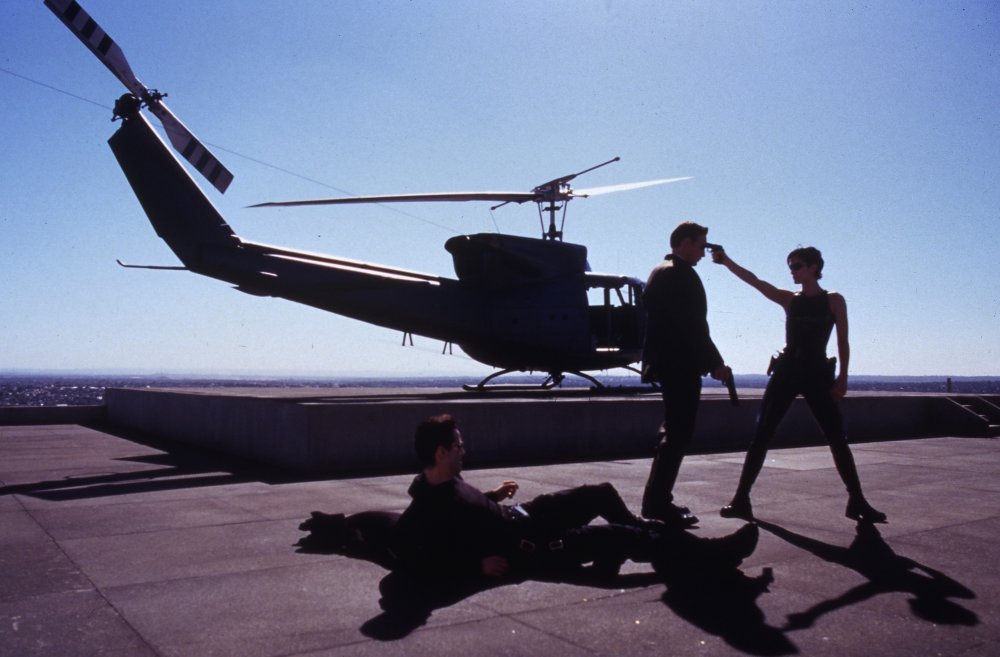 Nobody, however, does Woo quite like Woo; and the Hollywood films that best show off his stylistic tics are the ones he was lured over to direct himself. His Hard Target (1993) – the first major Hollywood film to be made by a Chinese director – and Broken Arrow (1996) both offset otherwise hackneyed plots with flashes of the Woo style, but it was with two later Hollywood features, both featuring characters who wear other people’s faces to disguise their own identity, that Woo would find the perfect vehicles for sneaking his own sensibilities beyond his usual Hong Kong’s precinct. Although Mission: Impossible II (2000) was a clearly defined franchise property, Woo would smuggle into its action the baroque excess (and gratuitous slo-mo shots of pigeons) that had come to define his style. Even better, in Face/Off (1997) he grafted the transplant surgery of Eyes without a Face (1960) on to the sort of cops-and-robbers confrontations that typified his Hong Kong work, with a delirious storyline that sees police detective Sean Archer and master criminal Castor Troy literally swap faces and infiltrate one another’s lives. It is a premise that allows John Travolta and Nicolas Cage to parody each other’s acting styles in manic performances, even as Woo manages to deliver his usual obsessions and imagery under the guise of a Hollywood action movie. 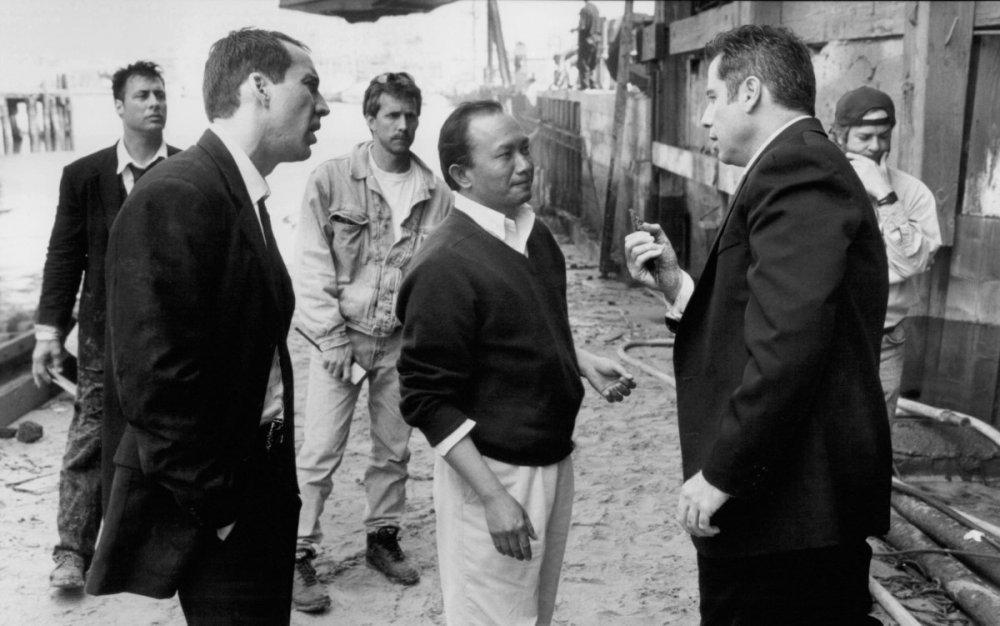 Face/Off is the amped-up apotheosis of Woo, offering the director a way to literalise the blurred boundary delineating either side of the laws. For here, going undercover involves adopting your nemesis’s mask: with Castor’s killer face replacing his own, Archer learns to appreciate that not all of Castor’s criminal associates are bad people, while the sociopathic Castor, wearing Archer’s mug, finds himself oddly drawn to the security of the cop’s middle-class suburban domestic life. In tracing this ongoing dialectic between two violently clashing cultures, Woo too would find an ingeniously unhinged way to sleep with the enemy, making himself right at home in Tinseltown, and bringing the influences for Hong Kong’s Heroic Bloodshed right back, full circle, to their American source.