A brilliant cast of British actors, including a young Sean Connery, star in the newly restored Hell Drivers, a tough and thrilling trucking movie shot on the B roads of Buckinghamshire. 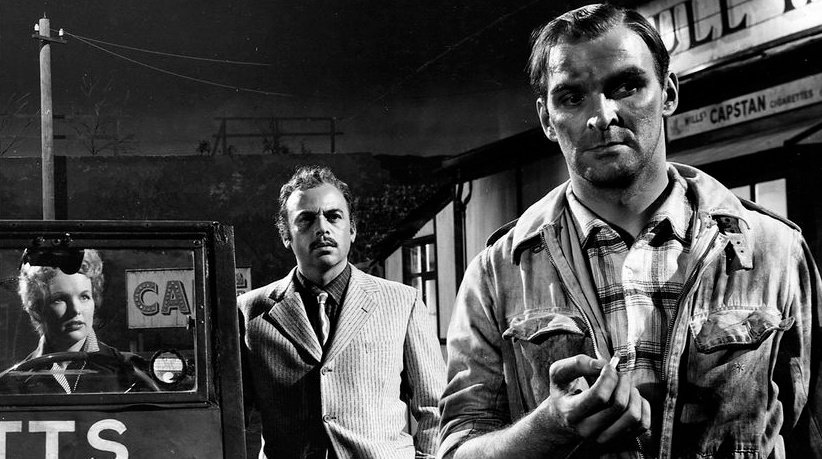 Back in the icy January of 1957, the B roads between Hillingdon and Slough witnessed some hair-raising scenes of road rage as HGV drivers terrorised locals in their race to deliver truckloads of ballast. This rather un-British behaviour (at least for that more genteel decade) was staged for the filming of Hell Drivers, the tale of ex-con Tom Yately who tries to go straight but gets sucked into a world of corruption and violence when he takes a job at a haulage company.

Hell Drivers was a very personal project for director Cy Endfield, who penned the script with John Kruse, based on Kruse’s own experiences driving lorries for a local authority. The film was a genuine departure for British cinema. Endfield was American, a refugee from the communist witch-hunts, and created a raw masculinity rarely seen on British screens, an antidote to the typical English gentlemen seen in Rank offerings like Genevieve (1953) and Doctor in the House (1954). Made independently but funded by Rank, the film established Endfield as an accomplished action director who went on to make films like Sea Fury (1958), Jet Storm (1959) and, most famously, Zulu (1964). 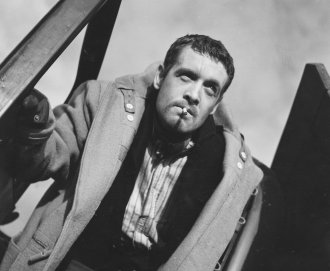 Endfield took a punt on Stanley Baker for the character of Tom. It was the first starring role for the Welsh actor, whose stocky frame and boxer’s face made him ideal casting. But the part required more than tough-guy swagger; Tom is something of a mystery, his background unfolding slowly and his character gaining new facets as the jigsaw of his past is gradually assembled. His sensitive side emerges in his friendship with Gino, an Italian lorry driver who distances himself from the callous antics of the other men.

The rest of the gang are played by some of the best character actors money could buy: Alfie Bass, Sid James, Gordon Jackson and a very young Sean Connery, with Patrick McGoohan as the brutish ‘Red’, who rules the roost through intimidation and foul play. The men move between the haulage yard, their lodgings and the truckers café, the Pull-Inn, a claustrophobic triangle which intensifies the atmosphere of rivalry between them.

This world in which the action takes place has aptly been compared to a wild west frontier town, a no-man’s land where lawlessness reigns. The drivers are engaged in a constant struggle for power, with speed and strength the only measures of manliness. But while the men are tough, the women have to be tougher. Lodging house owner Ma West (Marjorie Rhodes) keeps them in order, chastising them like naughty schoolboys. 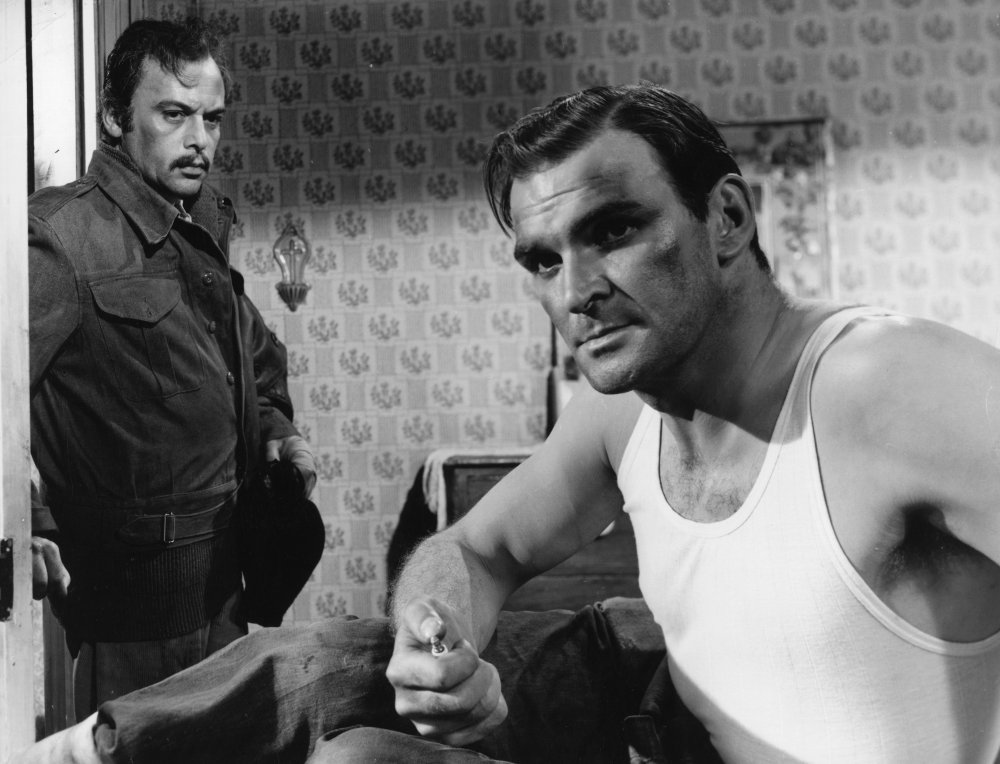 Peggy Cummins, as the firm’s secretary Lucy, uses her obvious charms to tame the men. With her short hair, jeans and check shirt she could pass for a western heroine (harking back to Cummins’ most famous role as a circus sharpshooter in 1950’s Gun Crazy), yet she transforms into a bar-room beauty at the local dance, making an entrance in a dress which would turn heads in any saloon. And it’s at the dance that the menace lurking beneath the truckers’ clowning comes into relief as the inevitable brawl erupts between them and the respectable, law-abiding local population.

Hell Drivers anticipated the social realism that was to dominate British films over the next few years but Endfield is not interested in analysing the psychology of the working-class man. The film is a study in male pack behaviour, portrayed as a petulant childishness that spills over into violence and pranks that escalate into lethal acts. 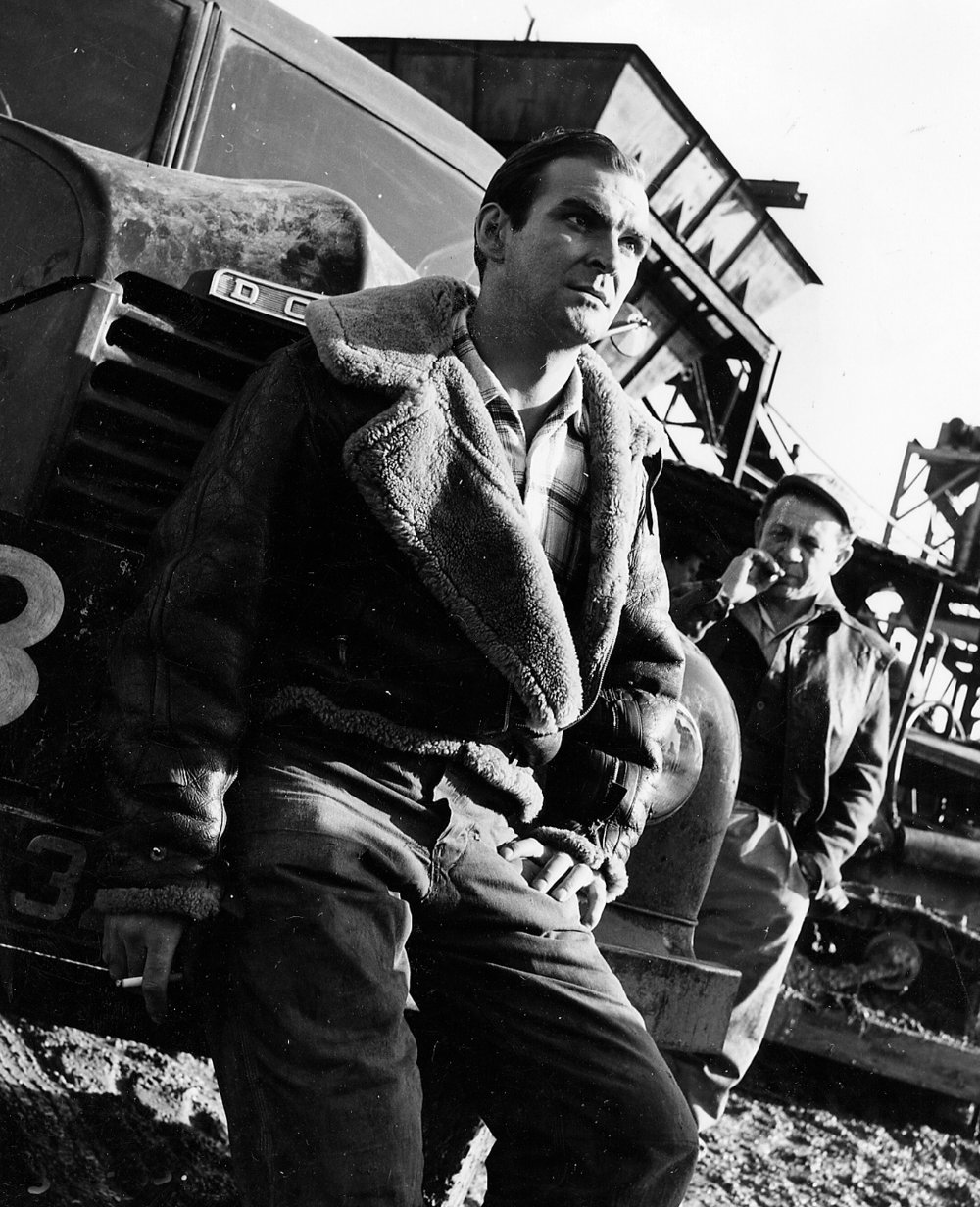 Endfield’s decision to shoot in black and white, rather than the showy Technicolor of many Rank films of the period, was a calculated one. Cinematographer Geoffrey Unsworth (himself an expert in colour filming, later winning Oscars for Cabaret and Tess) creates an effectively bleak, occasionally noir-ish mood with some beautifully subtle light sourcing. The scene of Tom and Lucy’s first kiss, lit by a single bulb, is incredibly potent, while the candlelit conversations between Gino and Tom convey the intense nature of their friendship.

But the film’s biggest attraction is the thrilling action shots of the seven-ton Bedford lorries racing through the Buckinghamshire countryside, screeching round the corners and running family cars off the roads. The BFI’s newly remastered presentation allows audiences to once again savour the macho exploits of the Hell Drivers on the big screen.

Waiter! There’s a fly in my film! – the restoration of Hell Drivers

If there’s one criterion that sums up the approach of the BFI National Archive team in mastering titles for release, it’s the aim to remove only those signs of time’s decay or the problems generated by previous, incorrect duplication. For that reason, this fly squashed into an original fine grain positive became a touchstone for us. 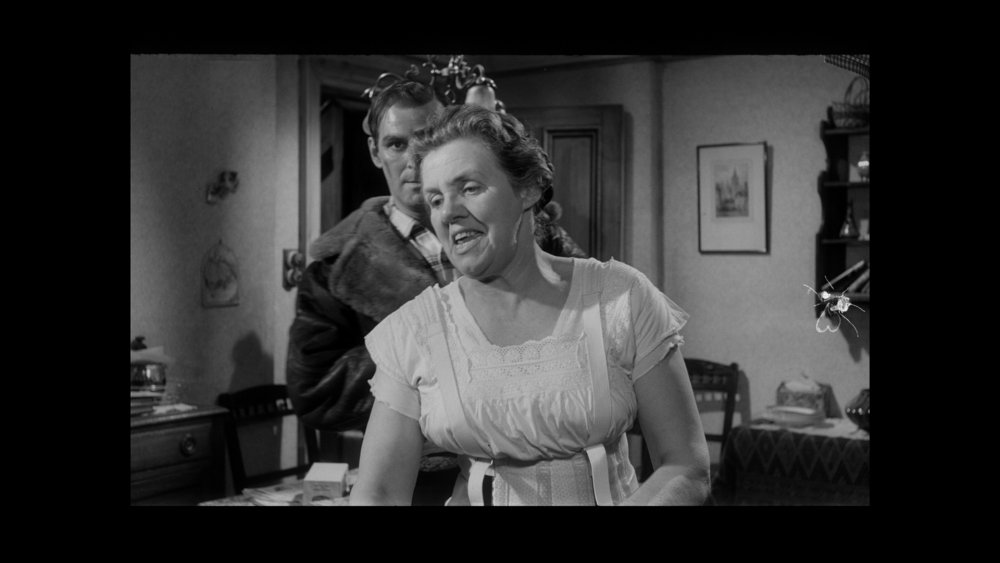 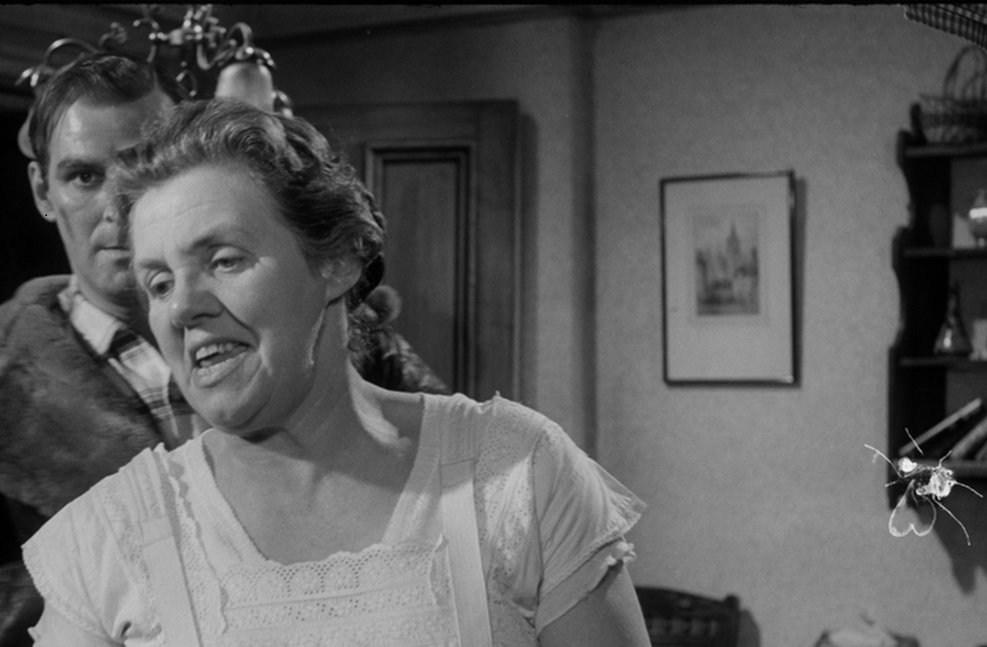 Hell Drivers was shot in the VistaVision format, as was Marlon Brando’s One-eyed Jacks (also showing in this year’s LFF). Indeed, Brando’s film was the last to be shot in VistaVision before the format was used for special effect backgrounds. This method had been devised by Paramount studios in order to create widescreen images in much higher quality than contemporary alternative systems, primarily the anamorphic Cinemascope.

VistaVision used 35mm film stock in the camera, but ran it horizontally so that images were captured across an area usually encountered in still photography: almost 36mm wide by 24mm high. After production and editing, the original negative was printed optically to make a 35mm film master in the usual ‘geometry’. The result was an image fitting within the standard four-perforation height and running vertically, which could be copied and run in cinemas without additional lenses. Widescreen projection was achieved from a print that was compatible with existing equipment.

Rank licensed VistaVision in the mid-1950s but Hell Drivers seems a curious choice for the format, especially when compared to White Christmas (1954) or The Searchers (1956). There are plenty of reasons to be grateful today, however, for Geoffrey Unsworth’s powerful combination of black-and-white and widescreen photography.

Thanks to the BFI National Archive’s preservation of an original, eight-perforation fine grain positive, printed from the original negative in 1957, the new digital masters could begin from the best existing source. After frame-by-frame scanning at Pinewood Post Production, the mastering happily taking place not far from the film’s production location, extensive image grading was used to present the photography in its glistening tones.

The digital grading tools were also needed to remove the appearance throughout of ‘d-lines’. These continuous lines are created when a particle trapped in the printer’s gate restricts light reaching the film stock. The result is a narrow line of light grey. Fortunately, a shape could be created, and tracked across shots and camera movement, to even out the appearance.

Simultaneously, we needed to find a sound source that matched the VistaVision copy – which is of the original UK release and not the shortened US version. Fortunately, three 35mm copies in ITV’s collection were loaned for analysis and the best track from those was digitised at very high specification for mastering and equalisation. Respecting the characteristics of the original mono mix, noise was reduced and the clicks and pops from particles on the track have been removed.

Removal of dirt and scratches is probably the best-known aspect of film remastering. Certainly, plenty of those have been removed from the new master of Hell Drivers, along with a reduction in the flicker caused by the printer’s lamp. In all cases, we’ve chosen to leave the texture of the original negative as it was produced. It’s for that reason, that we reluctantly recognised this fly as having been squashed in the printer between film negative and fine grain positive under pressure of a roller.

Perhaps appropriately, the affected shot is Tom’s tying of Ma West’s corset under her vigorous encouragement. The fly’s spectral appearance, a little like an x-ray, is due to its presence blocking light exposure to the positive. It has ‘minus density’. Understandably removed from the new digital release, it will remain preserved on both film and data tape in the National Archive’s collection.