Among the greatest films ever made, Jean Renoir’s First World War drama La Grande Illusion – released more than 80 years ago – still packs a powerful punch as a film about humanity’s common bonds. 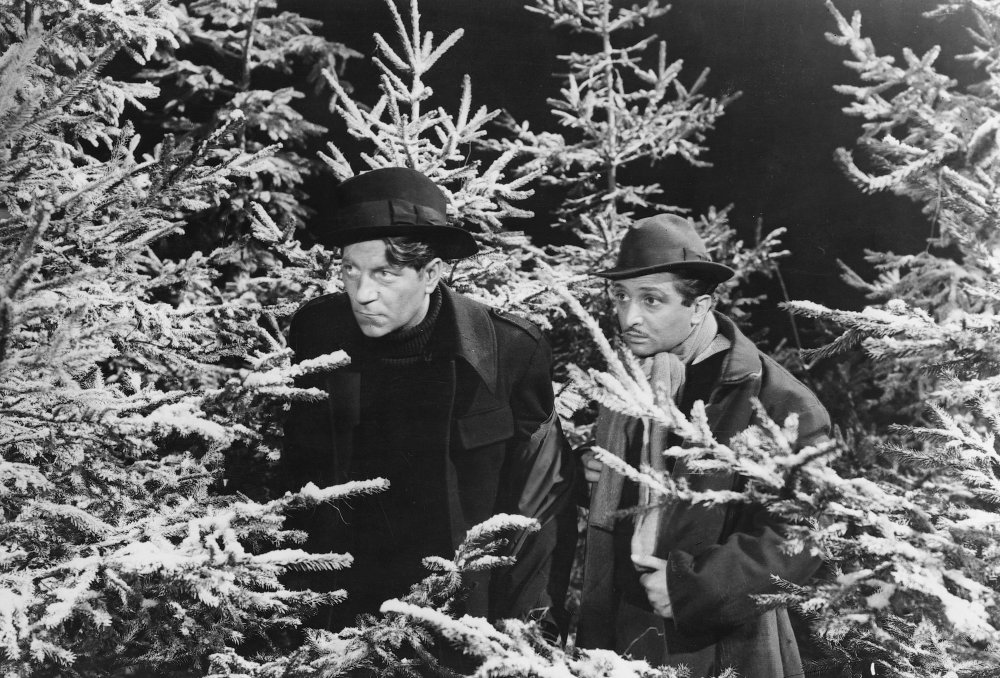 “How has La Grande Illusion held up over the years?” André Bazin asked and answered his own question in his book on director Jean Renoir in 1973: “It is not enough to say that it has retained its power … the innovation, the audacity, and, for want of a better word, the modernity of the direction have acquired an even greater impact.”

Timely on its first appearance in 1937, Renoir’s masterpiece is now accepted as timeless, although it has suffered a little dangerous neglect. As the continent stumbled towards a second world war, this story of prisoners of war finding friendship, solidarity and hope behind enemy lines voiced the mounting pacifist sentiment in France and offered a vision of European unity. Eighty years later, the message of La Grande Illusion is every bit as relevant.

We would be fools to ignore that note of warning in the title though. For Renoir’s cynical First World War prisoners, the idea that the conflict will be over soon, or that it will never happen again, is snappily dismissed as an illusion. Could the film’s apparent embrace of solidarity and pacifism also be so fragile? 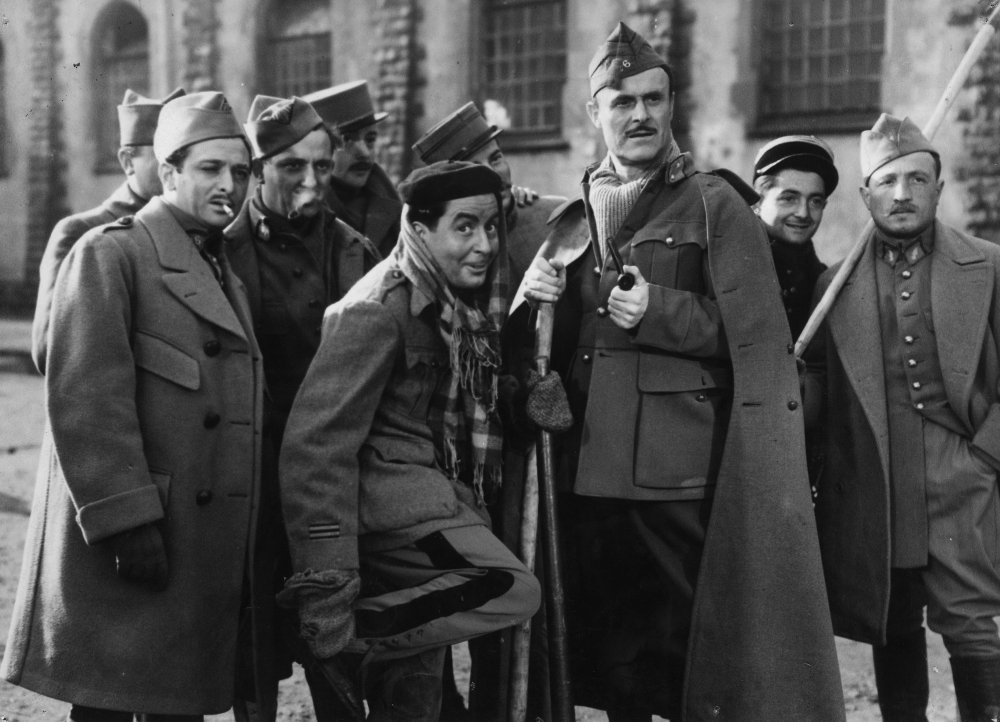 The prisoners of war in the film offer a commingled microcosm of French society: Jean Gabin is Maréchal, a working-class soldier (dressed, according to critic Raymond Durgnat, in Renoir’s own military uniform), Pierre Fresnay plays an aristocrat called Boeldieu, Marcel Dalio’s Rosenthal is a well-off Jew, born in Austria, and vaudeville comic Cartier is played by Julien Carette.

Together they plot to tunnel out of their prisoner-of-war camp, Halbach, but their escape plans are dashed when they are transferred to the more forbidding Wintersborn facility, a medieval chateau ruled over by a battle-wounded patrician German officer, Captain von Rauffenstein, played memorably by actor-director Erich von Stroheim.

Although the group seems united, joking that once their deaths would be determined by their “class ailments” but war will be the ultimate leveller, they soon appear to divide along class lines. Rauffenstein takes a shine to Boeldieu, reminiscing with him about horse races and Parisian hijinks, while warning that the war spells the end of their shared privilege. Maréchal and Rosenthal become chums, as even the nouveau-riche Jew’s “three galleries of genuine ancestors” in his chateaux can’t erase his core class identity. 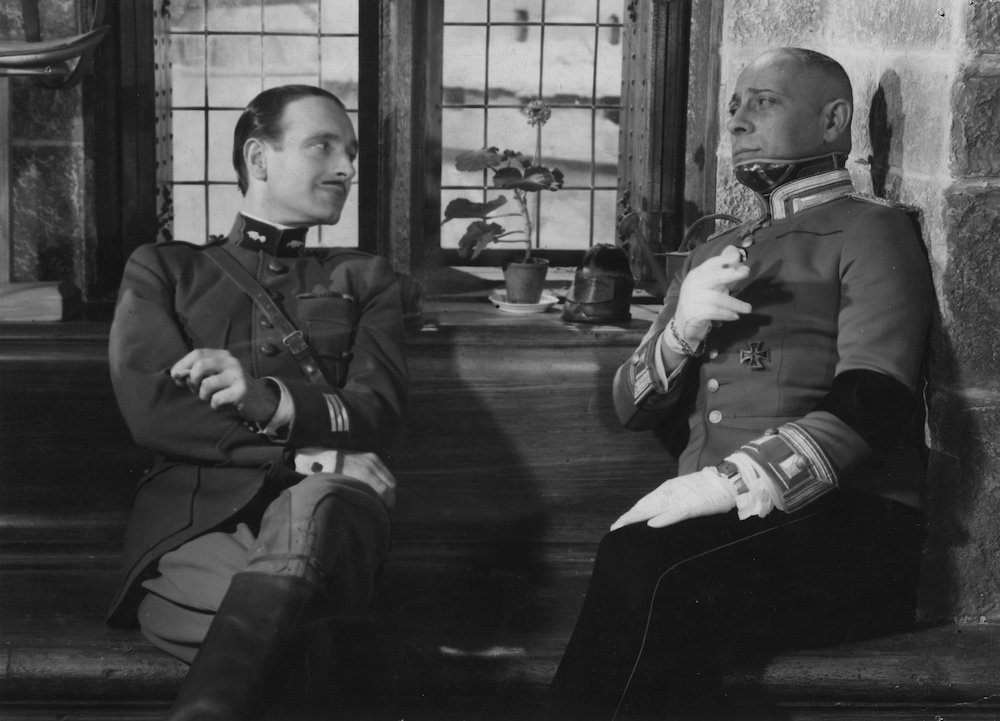 The twist is that there are bonds stronger than class ties. Boeldieu will eventually use his advantageous position, and Rauffenstein’s sympathy, to make a sacrifice on behalf of his comrades, and his country. The call of patriotism retains its power even in the mixed camp, as revealed when an impromptu rendition of ‘La Marseillaise’, in response to news of a French victory, unites actors, crew and audience in song at the camp theatricals – which is captured by Renoir in one circular camera movement.

La Grande Illusion is an oddity among war films, without battle scenes and with very little violence. In many ways the war is shown to be just another game, like the hobbies (painting, translating Pindar) the prisoners use to kill time in the camp. Amid preparations for the camp show, Boeldieu looks out at the German soldiers performing a drill in the yard and observes that “on the one side children play at soldiers; on the other soldiers play like children”. His multiple, ingenious escape attempts are just sport. As tennis courts are for tennis matches, he argues, prison camps are for escaping.

The film is more concerned with life in peacetime, with the optimism born in a German farmhouse where Maréchal and Rosenthal lodge with widowed housewife Elsa (Dita Parlo) after their escape from Wintersborn: French, German and Jew living in domestic harmony, celebrating Christmas.

The final shot, in which Maréchal (who promises to return for Elsa and her daughter) and Rosenthal reach Switzerland safely, but cut lonely figures against the snowy mountainside, casts a shadow of doubt over their future hopes. The original script had an even starker conclusion: Maréchal and Rosenthal agree to meet after the war, but, in the agreed venue, while a crowd celebrates the armistice, two empty chairs register their absence. 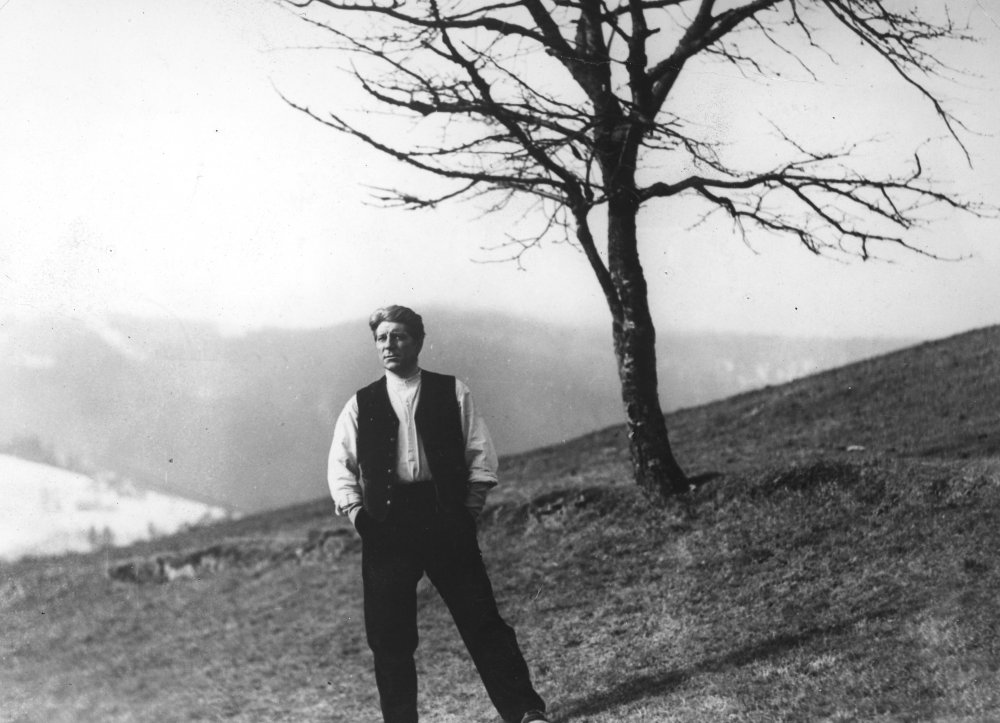 Renoir himself said that his film is about a question “so important today that if we don’t solve it, we will just have to say ‘goodbye’ to our beautiful world”. In the end, as the German patrol lower the guns aimed at the escapees, La Grande Illusion offers us a glimpse not of our destiny, but a dream worth striving for. Maréchal forges new alliances everywhere he travels, but only because he actively pursues them: he overcomes his own prejudices in order to befriend Rosenthal, attempts to learn Elsa’s language and even lectures a cow on their shared situation.

While La Grande Illusion emphasises a common humanity that transcends class, geography and faith, it also argues that, if we want a better world, it’s not sentiment but effort that is required. While Boeldieu sees a child’s game in the German soldiers’ drill, Maréchal finds a call to action: “It’s not the music that gets you, but the marching feet.”