It’s been voted the second best film of the 1980s, but what makes Wim Wenders’ fantasy about two angels observing life in Berlin still so resonant today? These five extracts give a clue to the film’s enduring richness. 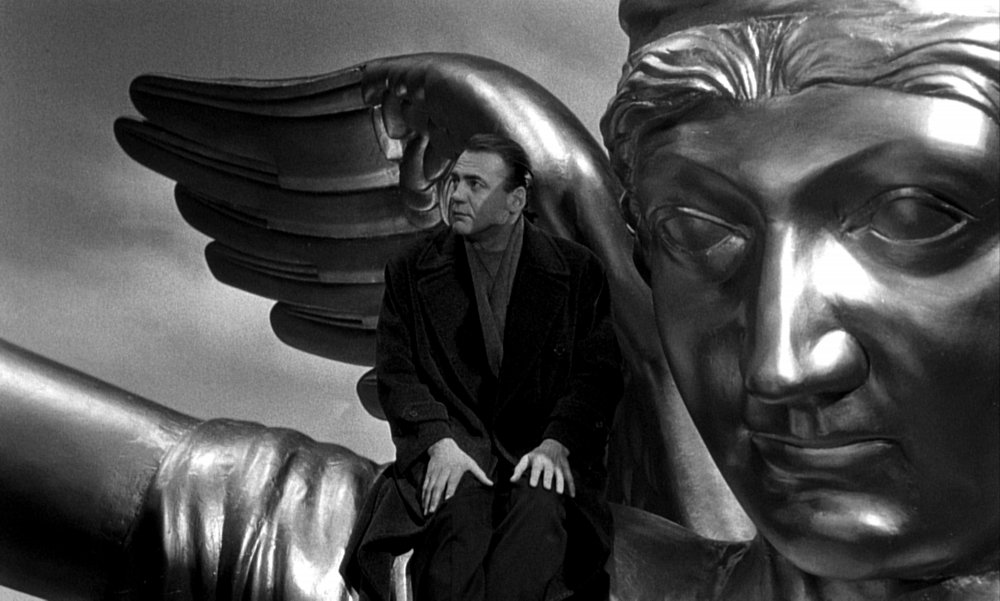 Few modern films have made the transition to classic status as quickly as Wim Wenders’ Wings of Desire (1987). His tale of a guardian angel in a still-Wall-divided Berlin who falls in love with – and to earth for – a melancholy trapeze artist is a canny merging of cerebral formal experimentalism and unabashed popular romanticism. It swept up highbrow critics alongside a much larger mainstream audience than was typical for ‘challenging’ foreign-language cinema of the day. Leading US film magazine Premiere’s 1980s wrap-up poll voted it second only to Raging Bull (1980) as film of the decade.

Still a quintessential ‘arthouse’ film, its bold use of style (black-and-white, existential voiceover, languorous pacing) – and content (overt symbolism and culture blending, from Rilke-inspired poetry to Nick Cave’s post-punk anthems) fostered an appreciation, even a devotion that endures to this day.

No doubt the snaking Berlin Wall that split east and west, and which would be breached just two-and-a-half years later, epitomised the divisions that Wenders and co-writer Peter Handke explore: temporal and eternal; past and present; and seen and unseen, through the watching, invisible angels, chiefly Damiel (Bruno Ganz) and Cassiel (Otto Sander), who debate the former’s desire to “enter the history of the world”, having been outside looking in for so long.

Ultimately, Wings of Desire is a visionary film about vision: the act of watching, with all its fascinations and limitations. Here, then, are some of the visual strategies at play.

Wenders brought legendary cinematographer Henri Alekan – responsible for the haunting gothic chiaroscuro in Jean Cocteau’s 1946 La Belle et la Bête – out of retirement to shoot Wings of Desire (and named the film’s circus in his honour). Alekan famously used a silk stocking as a filter for his textured, sepia-tinged black-and-white imagery, depicting the angels’ muted vision of the world. Ironically, his rich, creamy monochrome might appear too gorgeously tactile for the angels’ non-sensory world, but its silent-cinema feel helps instantly convey their timeless existence.

Given its central characters, Wings of Desire is an exceptionally watchful film, both clinical and voyeuristic. Wenders’ unseen angels are basically unable to engage human beings directly. And yet, the very act of quietly watching over them, able to hear their innermost thoughts and desires, and occasionally even offer some kind of palliative aid, is one of the film’s most touching aspects.

Wenders’ stately drifting camera suggests their detached, exterior position (and later, when Damiel steps into time, is brilliantly contrasted with a more dynamic, street-level tracking). Yet the angels’ invisible intimacy and empathy with beings they can never fully understand, somehow makes these divine observers all-too human. In fact, it echoes the essence of the moviegoing experience itself: spectators unable to affect what they see on screen, and yet so often, unable or unwilling to remain emotionally disconnected.

Symphony of a city

Don’t forget that the film’s original title is Der Himmel über Berlin – The Sky or Heavens over Berlin – and that the project began as an investigation into Germany’s then-divided city. Indeed, its angels were only brought in as an inspired afterthought. Perhaps acknowledging the tradition of early ‘city symphony’ silent films like Dziga Vertov’s Man with a Movie Camera (1929) or even Walter Ruttmann’s Berlin, Symphony of a City (1927), Wings of Desire is also in part a wonderful time capsule of wintry, pre-unification Berlin. Its roving aerial camerawork and ground-level tracking wide shots highlight the city’s desolate no-man’s-land expanses bound by the ever-present Wall.

Yet the film also diligently looks back at earlier, even more turbulent times, with its archive – and, strikingly, colour – footage of the capital in its ruinous postwar state. For the angels, this may be a passage of time gone in the blink of an eye; but to late-20th-century audiences, German or otherwise, Wenders suggests that the spectre of recent history isn’t so easy to cast off.

Of all the directors – Herzog, Fassbinder and co – from the late-1960s and 70s New German Cinema renaissance, none showed their love of American cinema and Americana as explicitly as Wenders. Returning to his native country after filming Hammett (1982) and Paris, Texas (1984) in the States, the appearance of Colombo star (or John Cassavetes favourite, depending on your frame of reference) Peter Falk ‘as himself’ isn’t just another Wenders Hollywood homage, but a further layer to the theme of moviemaking.

Falk is ostensibly in town to shoot a Second World War-set thriller, but his avuncular presence also brings a welcome, grounded warmth to the angst-ridden, ethereal ambience. And the revelation of his true origins delivered late in the film isn’t just a wonderful (and perfectly judged) surprise, it connects beautifully to Wenders’ themes and his central character Damiel’s dilemma.

The colour of love

As the film’s English title makes plain, desire is the driving force behind both the film and its angel protagonist Damiel’s fervent longing to leave behind immortality and become human. As this wish percolates and he meets Marion (Solveig Dommartin), the wistful circus performer with whom he falls head over wings in love, Alekan’s exquisite monochrome gradually gives way to vibrant colour.

The first time is an abrupt cut as she swings on her trapeze (wearing, naturally, angel wings); the second, more tender and deliberate shift comes just after she confesses her innermost feelings in Damiel’s presence. As Damiel departs, the image slowly shifts into colour: foreshadowing the union to come in the real world. For a film so intent on conjuring and then conquering a state of timelessness, this disruption of the image is the ultimate signifier that life and love within time are the only true reality. Seeing blood as red. Tasting coffee. Feeling the cold. For Wenders and his characters, the realm of the senses is the one that truly makes sense.