The fifth Doctor and The Caves of Androzani

Following Tom Baker’s reign as the Doctor, Peter Davison had big shoes to fill. But fan-favourite serial ‘The Caves of Androzani’ proves him a worthy successor, enduring as one of the very best of the 1980s Doctor Who adventures. 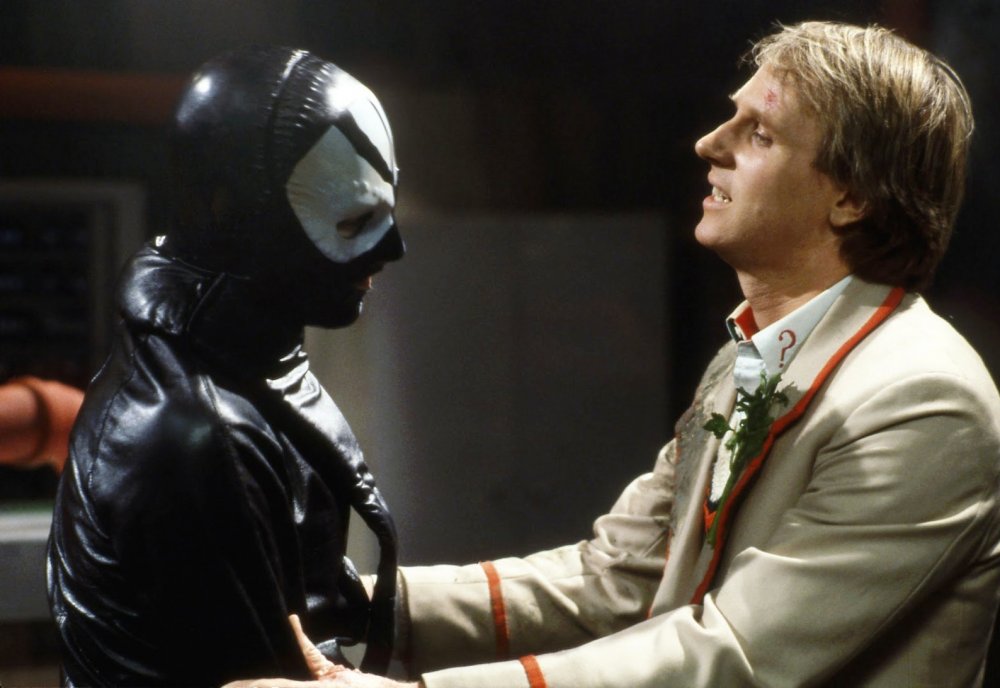 You have the mouth of a prattling jackanapes… But your eyes… they tell a different story.
Sharaz Jek, ‘The Caves of Androzani’

So how do you follow the ‘definitive Doctor’…? How about with the definitive regeneration story? ‘The Caves of Androzani’, even the most contentious of Who fans will concede, is something special. All four episodes of the serial crackle with wit, character, tension and pace. However, before discussing the ‘end’ that ‘The Caves of Androzani’ represents, let’s go back to the beginning…

In 1981, under the charge of producer John Nathan-Turner, changes to Doctor Who were already in evidence: perceived ‘excesses’ were reigned in and the series returned to the seriousness and narrative rigour which the show’s past aimed for. For many fans, the advent of Peter Davison’s tenure as Doctor Who represents the moment when loyalty took over from love. This period is among the least revisited of the entire Who series, an era when keeping up with the Doctor and his companions at times felt a bit like endurance rather than a joy. Which is why the fan favourite status of ‘The Caves of Androzani’ is something of an irony – it’s a dark story with hints of the macabre. 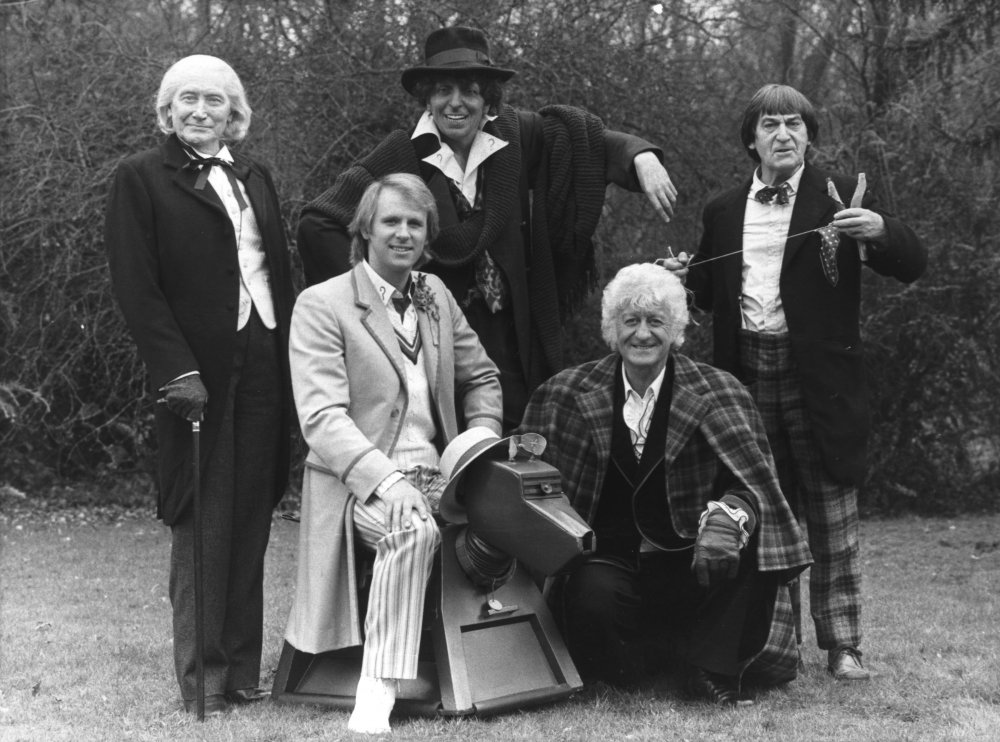 Peter Davison was the Doctor for only three seasons and in that time had to attempt to eclipse the long shadow cast by Tom Baker, and the other larger-than-life characterisations preceding him. ‘The Caves of Androzani’ is definitive, if bittersweet, proof that given the right story, script and direction he was the right man for the job. In interviews from the period, Davison gives the impression of being a self-effacing, likeable actor – already a familiar face on television thanks to the family fare of All Creatures Great and Small and Sink or Swim.

However, beneath the personable, easy-going exterior, real grit is present in his Doctor. The Doctor as ‘vulnerable hero’ is not always the most satisfying of characterisations, but in ‘The Caves of Androzani’, Davison’s incarnation is both authoritative and heroic in the face of unfolding tragedy playing out on the planets of Androzani Minor and Major. The Doctor is dealing with fates that will lead to his ‘end’. It’s a prescient Doctor who says to Peri (Nicola Bryant) early in Androzani’s first episode: “Curiosity’s always been my downfall.” 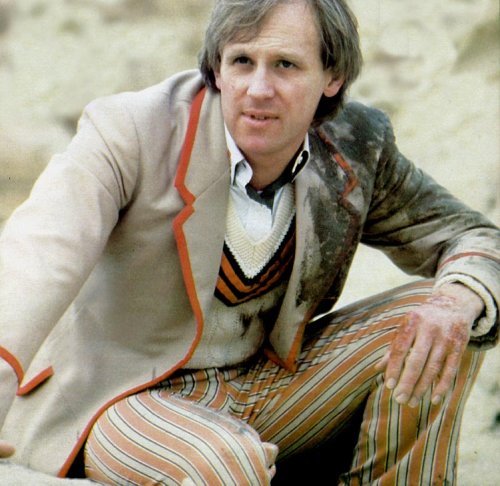 Peter Davison as Doctor Who

After a five-year absence away from the show, Robert Holmes’s superlative script loosely mixes the conventions of 17th-century Jacobean tragedies with The Phantom of the Opera. A firm favourite with Who fans, Holmes had a skill for combining the elements of horror and science fiction (see also: ‘Pyramids of Mars’ and ‘The Talons of Weng-Chiang’) to create something both alien and gothic.

Holmes plunged the Doctor and Peri into events outside of their control. Viewers are placed into a world of corrupt and duplicitous characters: individuals driven to extreme lengths by money, power and revenge, their minds and bodies corrupted in the pursuit of riches to be gained from controlling supply and production of the life-prolonging drug, Spectrox.

The Doctor and Peri find themselves exposed to the poisonous Spectrox Toxaemia, and the machinations of the scarred, vengeful figure of Sharaz Jek (Christopher Gable), and Trau Morgus (John Normington), a ruthless and powerful man prepared to use any means necessary to stay that way.

Part Fu Manchu, part Bond villain, and the epitome of the amoral, self-serving businessman, the emotionally sterile Morgus manipulates all around him. Yet even he is just another dispensable cog in the corporate wheels that keep his conglomerate turning. Lives are sacrificed in the name of near-insane levels of self-interest, and as the story reaches its bloody conclusion, the only selfless act is that of the Doctor, sacrificing his ‘life’ by going deep within the caves to find the antidote that can save Peri. 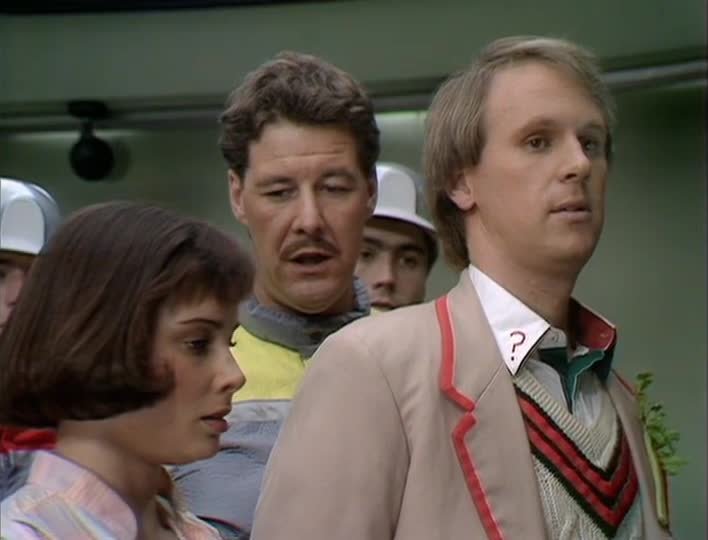 In a story full of ‘grotesques’ and undesirables, of particular fascination is Sharaz Jek. Played with a macabre grace by Gable, this masked, lonely character lives in the depths of Androzani Minor, hideously scarred for life on the barren planet after being betrayed by Morgus. Jek controls the supply of Spectrox to the desperate citizens of Androzani Major, leading to an ongoing military campaign being fought between the planet’s soldiers and his army of androids and mercenaries, working for whoever pays the highest price.

None of this would be so real without the skill of Graeme Harper, whose direction achieves a momentum that intensifies the sense that these characters are on the verge of self-destruction. ‘The Caves of Androzani’ is a ‘big’ story with a lot of depth. The secondary characters are as interestingly ambiguous as the main protagonists: Salateen (Robert Glenister) and General Chellak (Martin Cochrane), and the mercenaries, especially the incredibly menacing Stotz (Maurice Roëves) and Mogus’s personal assistant Krau Timmin (Barbara Kinghorn). 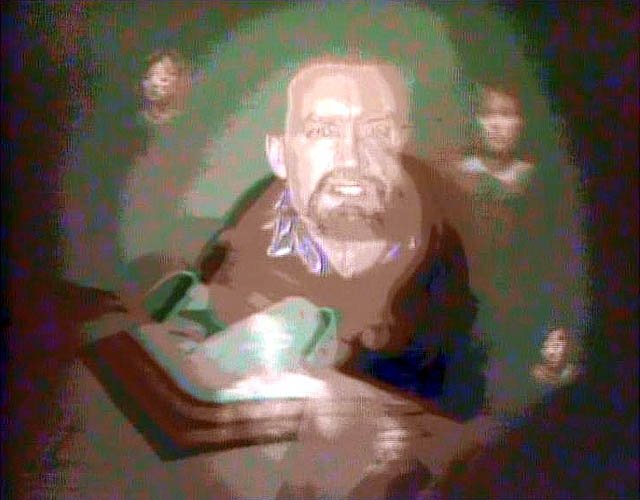 Which brings us to the ‘end’. ‘The Caves of Androzani’ resolves with the Doctor regenerating. Apparently, with a conceptual nod to The Beatles’ ‘A Day in the Life’, the fifth Doctor ‘dies’, experiencing a hallucinatory flashback to all his former companions. For once, the end is portrayed as an act of inevitability rather than a linking device to the arrival of the next Doctor.