Where to begin with Luchino Visconti

Your next obsession: the sumptuous masterpieces of Luchino Visconti. 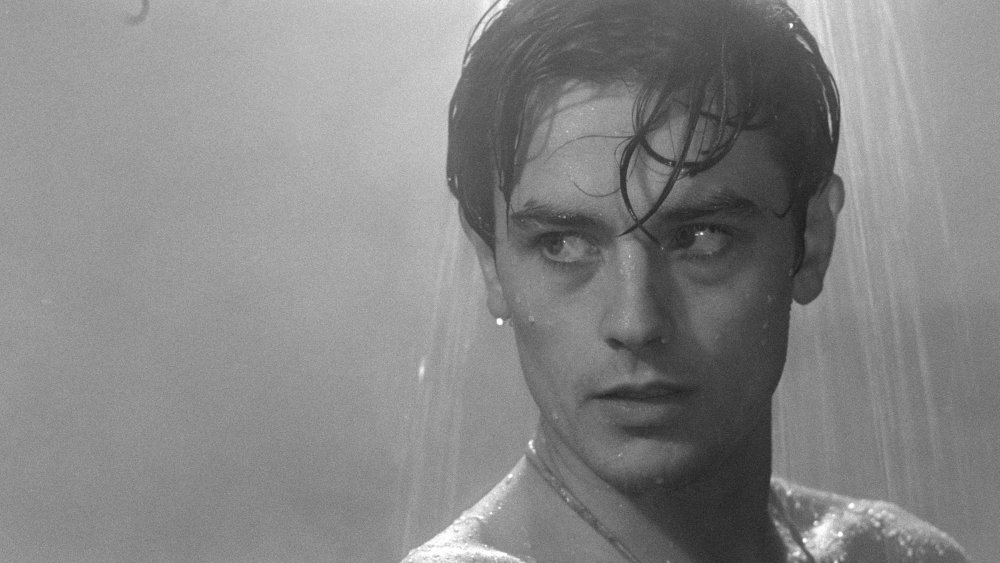 Luchino Visconti di Modrone is one of the few film directors who also had the distinction of calling himself a genuine aristocrat. Born in 1906 to a noble family in northern Italy, his well-bred background and international art education only seemed to enable his subversive tendencies. Visconti was both a Marxist and openly homosexual at a time when both could mean suffering terrible public consequences – but he also mourned the demise of his old social strata, and thought of himself as a staunch Catholic.

The director occupied a paradoxical position in Italian film culture, and his films vary from salt-of-the-earth tales of workers and fishermen to explorations of opulent nobility in various stages of torment and decay. The precise décor of his palaces, gardens and sitting rooms are inextricable parts of his historical films; a 19th-century Sicilian villa was entirely restored for 1963’s The Leopard. Visconti was said to work at a level of obsessive detail, often reconstructed from his own childhood memories. 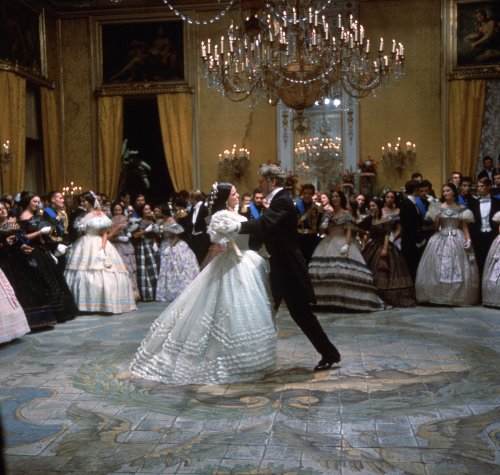 His films have large, epochal canvases – and the lavish style might seem intimidating to the uninitiated. But don’t be fooled by all the plush furnishings: Visconti was beloved by actors for a reason. It’s his characters we remember best – the sensual, guilty Gino (Massimo Girotti) in Ossessione (1943), the lovesick Countess Serpieri (Alida Valli) in Senso (1954), or the worn-down grace of Don Fabrizio (Burt Lancaster) in The Leopard.

The man also had a tendency to invoke highbrow cultural references. There are visual allusions to countless paintings; adaptations of Thomas Mann (Death in Venice) and Fyodor Dostoyevsky (literally with Le notti bianche; spiritually with Rocco and His Brothers). He was known for layered historical treatises utterly specific to their moment, whether it be late-19th-century Sicily (The Leopard) or Third Reich Germany (The Damned). Visconti, like a good aristocrat, had also dabbled in directing opera, the influences of which are manifold.

So it’s true that Visconti was never the most approachable of the great Italian directors. He employed more artifice than De Sica, more narrative cohesion than Antonioni, more historical baggage than Fellini. He loved polished, formal compositions but also hysterical displays of passion and trauma. He simultaneously celebrated and mourned the passing of traditionalist Italy. And with his glorious blend of influence and experience, it’s unlikely we’ll see a film artist quite like Visconti again.

The best place to start – Rocco and His Brothers

For a director well-known for luxurious Technicolor, it may seem counterintuitive to begin with a film in striking black and white – not to mention one set in contemporary Milan. But 1960’s Rocco and His Brothers, a tender and often funny family drama, is perhaps his most humane work. It charts the fortunes of a poor southern Italian family as they move to the metropolitan north looking for work and opportunity. The family is made of an overbearing mother and five handsome brothers, including the brutish Simone (Renato Salvatori) and good boy Rocco (Alain Delon). The brothers fall into the city’s pursuits: factory work, nightlife, boxing gyms, and eventually crime. When both Rocco and Simone fall in love with local prostitute Nadia (Annie Girardot), unfurling tragedy awaits them. 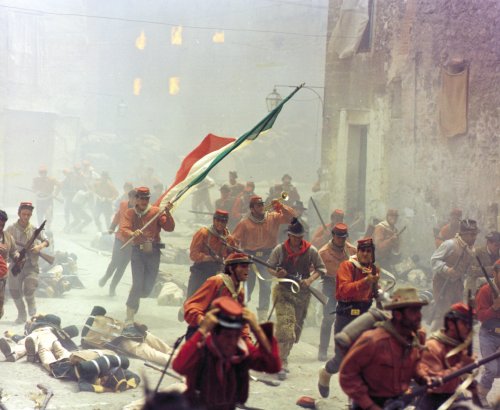 It makes sense to approach The Leopard – the epic apotheosis of Visconti’s career – at an intermediate stage of viewing. His meditative adaptation of Giuseppe di Tomasi Lampedusa’s novel is set in 1860s Italy during the Risorgimento, capturing the fading aristocracy and its poignant last gestures. The revolution sweeping the nation does not thrill proud Sicilian prince Don Fabrizio (Burt Lancaster), who ruminates throughout on those who will ascend to power after him.

His dashing nephew Don Tancredi (Alain Delon) is a political opportunist who fights for the new regime, and the episodic narrative is concerned mainly with Tancredi’s advantageous marriage to the beautiful Angelica (Claudia Cardinale). The final half-hour sequence – of an opulent ball in a gilded palatial home – is mesmerising. The camera slowly glides through the corridors, lingering as if to imprint details onto the memory. It adopts a wistful tone, suggesting that this event may be the last of its kind. Don Fabrizio passes through its flickering beauty like a phantom. Though we may not understand the plight of living at the end of his crumbling epoch, we’re moved by his dignity and sadness. 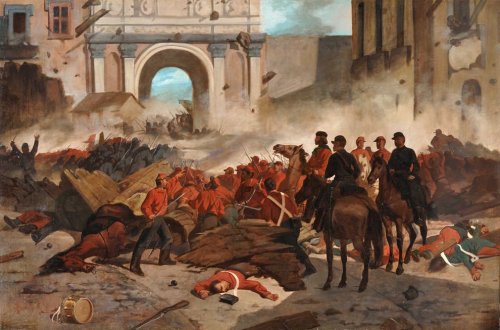 Garibaldi in Palermo by Giovanni Fattori, 1860

Visconti’s darker, period-set ‘German trilogy’ (The Damned, Death in Venice, and Ludwig) are all worth a look at this stage, marked as they are by a wider interest in European history and almost somnambulant camera movement. The exquisite architecture and romance of period drama is long vanished here. Perhaps the most praised of these is Visconti’s languorous ode to idealised beauty and expectant mortality, Death in Venice (1971). Dirk Bogarde plays Aschenbach as a composer, and strains of the director’s beloved Mahler accompany the film.

The true showstopper, though, may be The Damned (1969), loosely based on the rise of a real German industrialist family with ties to the rise of Nazism. The film links sexual deviance and brutality to the spirit of Hitler’s regime. Helmut Berger is the wealthy family’s twisted grandson, who espouses Hitler’s view that “personal morals are dead. We are an elite society where everything is permissible”. The horror-show of abuse and abasement to follow offer a devastating look at the old monied families of Europe – and their degeneration in the modern period. 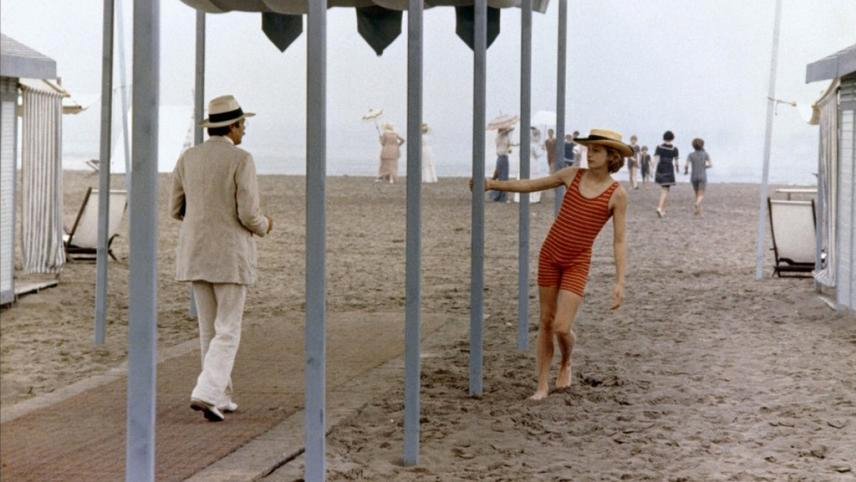 An odd one to start with would be La terra trema (1948). It’s Visconti’s second film, but something of an outlier in his career. It’s probably the closest he truly came to approximating neorealism, telling the story of a group of exploited fisherman in rural Sicily – real fishermen, speaking in Sicilian dialect. One family forms a collective and attempts to become independent of greedy wholesalers, but the result is a rather drawn-out leftist parable. La terra trema is nonetheless suffused with beautiful imagery, such as fishermen’s wives wrapped in black shawls, silhouetted on the rocky coast and dwarfed by the crashing surf.

It may be just as misguided to skip to the end. Conversation Piece (1974) is the director’s reunion with Burt Lancaster over a decade after The Leopard. It’s a fantastically melancholy late career coup for both actor and director, but it’s better to come to it with a familiarity with the pair’s history – and with the director’s previous work. The two had a wonderful collaboration, and one wishes they’d worked more together. It can’t help but seem somewhat autobiographical, returning to Visconti’s long-held theme of men who long for and live in the past. History really does live and breathe through Visconti’s vast directorial vision.

Related to Where to begin with Luchino Visconti