Robin Baker, head curator of the BFI National Archive, discusses the extraordinary collection of early non-fiction films of India that have now been made available online. 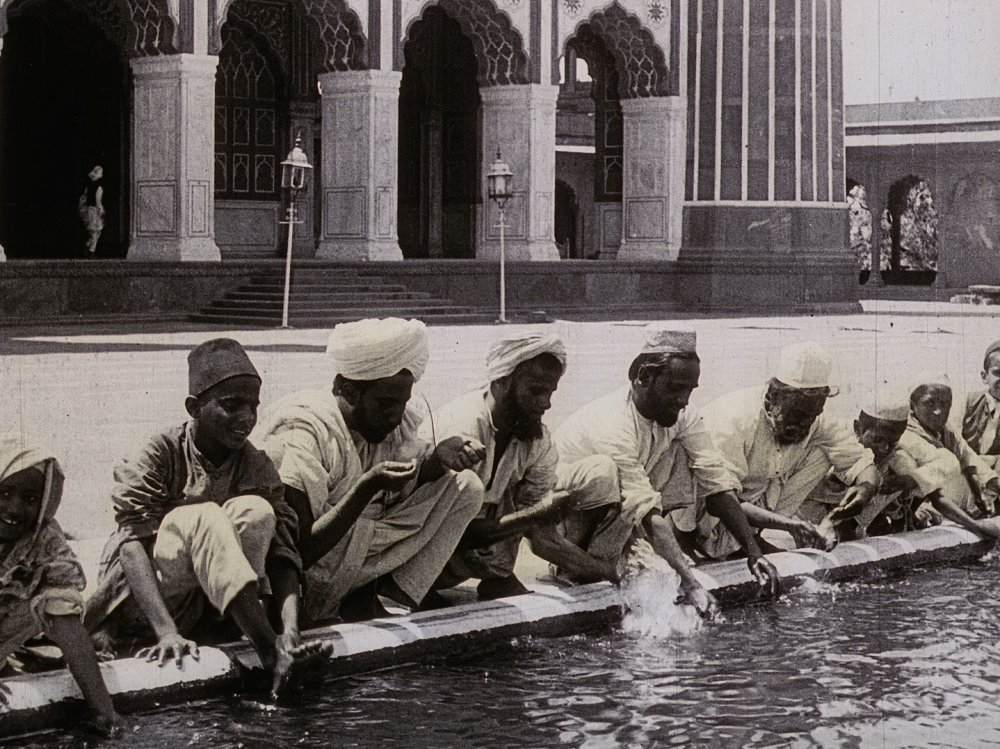 In 1999 I decided to spend the end of the old millennium living and working in India. I spent much of my time in Dehradun, gateway to the hill stations in the western Himalaya and to the pilgrim sites of Haridwar and Rishikesh. I can think of few other periods in my life when I have lived quite so fully or intensely.

After starting work at the BFI I was intrigued to discover that a number of films featuring the city were preserved in the archive. A number of these were shot by Dr R. MacLagan Gorrie who, between working at Dehradun’s internationally renowned Forest Research Institute, was a prolific amateur filmmaker, recording his family life, work and travels. Like many of the home movies of India shot in the 1920s-40s, Gorrie’s films offer records of people, places and events where no other filmed record exists. And, like the most rewarding of them, they are shot with a curiosity for and fascination with the world around him.

I particularly love a sequence that Gorrie shot in Dehradun’s Paltan Bazaar in 1932. This is where I shopped several times every week, where I bought achaar (pickles) to spice up my food and where I purchased the painted plaster statues of Ganesha and Lakshmi that are looking down at me as I write this. The bazaar still runs like an artery through the city. The ox carts from Gorrie’s time are now replaced with mopeds, but the bazaar’s twists and turns remain much the same. Some of the shops appear not to have changed too much either.

One of the greatest rewards of watching any film footage from this period is of recognition – but also dislocation. It makes us feel like time travellers. If I have that emotional connection to the footage of Dehradun, what does it feel like to the families who live there, grew up there or went to school there (including writer Vikram Seth, historian Ramachandra Guha and artist Anish Kapoor)? This was the success of the BFI’s recent Britain on Film project: people connecting with the places they know and finding themselves taken on a journey into the past. To date more than 30 million people have watched films from the Britain on Film collection.

Marking the UK-India Year of Culture 2017 – and the 70th anniversary of independence and Partition – the BFI has digitised 250 films shot in what was British India between 1899 and 1947. The BFI acquired much of this collection serendipitously over 80 years. These are the survivors of probably many times as many films shot during this period that were lost due to monsoons, intense heat, political turmoil or migration. The stories they tell might be incomplete, but the films are remarkable.

It is impossible to escape the reality that, with a few exceptions – such as Tins for India (1941), an early documentary by Bimal Roy, the great director of the golden age of Indian cinema – nearly all of these films were shot by British (and a handful of French) filmmakers. This is India seen through the eyes of the colonist and often with strongly propagandist intention. There are films aimed at inculcating the one-big-happy-family notion of Empire into schoolchildren in the UK. There are newsreels that demonstrate and celebrate the pomp and bombast of British rule with the clout of a giant sledgehammer. Watching films of racing at Calcutta or Shillong you’d be excused for thinking that there were very few actual Indians in India. And there is spectacle – especially in the films of the 1911 Delhi Durbar – that leaves me both awestruck and horrified.

One of my favourite films in the collection is Scenes at His Excellency the Viceroy’s Garden Party at Belvedere (1926). It documents an engineered get-together for high-ranking Brits and Indians, and feels uncannily similar to the acutely observed ‘Bridge Party’ – ie to bridge the two cultures – in E.M. Forster’s A Passage to India, written two years earlier. In Forster’s description, and in the evidence of this film, neither party seems to be enjoying the other’s company a great deal. It’s painfully hilarious to watch the awkward encounters and embarrassed silences and, in particular, what could have turned into a diplomatic incident in an encounter between a British schoolboy and a young Indian prince. Tellingly, the documentation for the film lists most of the key British protagonists. The Indian guests remain anonymous.

Watch Panorama of Calcutta, India, from the River Ganges (1899)

Taking the honour of the earliest surviving film of India is Panorama of Calcutta, India, from the River Ganges (1899), made in the final years of Queen Victoria’s reign. The only problem is that the film doesn’t feature Calcutta (Kolkata) at all, but Varanasi, almost 700 km to the west. Produced by the Warwick Trading Company, it appeared in their catalogues under that title. Maybe the cameraman got confused about his travels, or perhaps the company thought a more familiar name might be more tempting for audiences? Whatever, we are stuck with a film title that is far from accurate and very possibly says something about colonial attitudes.

The collection is full of unidentified locations and even place names that we have yet to understand. A home movie attributed as Cochin and Malarax (1930) is a case in point. Where is Malarax? Was it a remote village? A variation on ‘Malabar’? A typo or a case of illegible handwriting? We have just started to scrape the surface of knowledge about these films. By making them available online I hope that the expert eyes of Indian and Pakistani viewers will spot people, places and events and contribute to everyone’s understanding.

The home movies are some of the most compelling of all the films in the collection. Not only are they far more comprehensive in capturing an India that escaped the attention of many professional filmmakers, but they necessarily reveal much about the filmmakers themselves. It’s hard not to warm to the Gorrie family and, in particular, the Crasters and the Hunters who film their lives and sometimes India itself with more than a degree of idiosyncrasy. These are families who, on the evidence of their films, at least, travelled through India open-eyed, as fascinated and compelled by their awfully big adventure as we are watching them. There are others, however, whose primary concerns are as chroniclers of Empire or participating in the mass destruction of India’s wildlife. 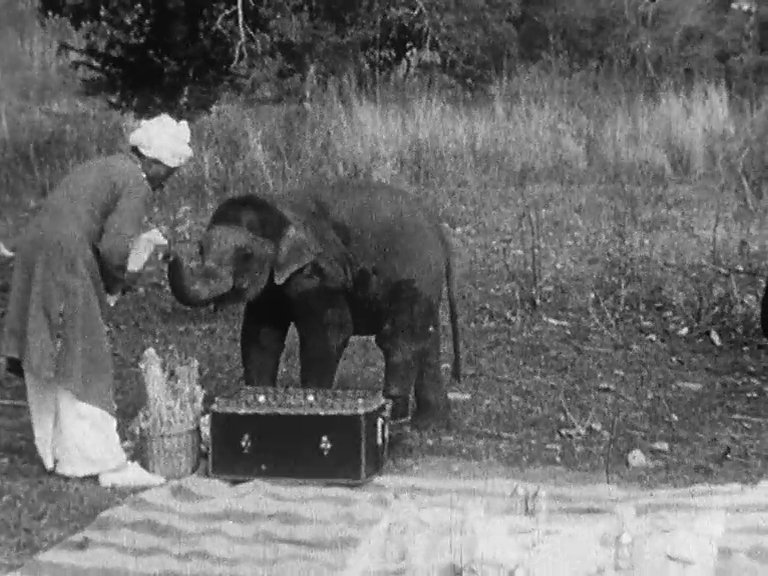 Indian Elephants in the Service of Man (1938)

There are other elements of the films that will irk my Indian friends: the preponderance of elephants, cows, snake charmers and holy men. In other words, the tedious tropes with which the west renders India ‘exotic’. The earliest professional filmmakers took their cameras to India (and across Asia) in search of the exotic to thrill European and American audiences with a taste of strange other people and places. Some home movie makers did much the same, but their films are not a million miles from those on the phones of contemporary tourists – or from The Best Exotic Marigold Hotel (2011) or The Good Karma Hospital (2017-).

There is a clear class polarisation in the films, as there was in Indian society: the very rich, the very poor and not a great deal in between. Middle-class Indians are relatively rarely glimpsed. The rich were filmed at official events and, when home movies became popular, they turned the cameras on themselves (amateur filmmaking was very much the territory of the affluent). The poor were the easiest targets for early filmmakers and continue to be so for the iPhone generations who don’t feel the need to ask before they film. Sometimes the films feel intrusive. However, I was pleased to discover documentation that showed that T. Burtt’s epic – and apparently intrusive – 1933 film of prayers at Lahore’s Badshahi mosque was made with the full knowledge and approval of the mosque authorities.

These are records from a time when very few films of India – or of what is now Pakistan and Bangladesh – exist. I find them engrossing, revealing and quite often emotional. There’s one film in the collection to which I have returned repeatedly: the prosaically and somewhat pejoratively titled A Native Street in India (1906). A camera placed in a single, static position records people walking towards it. The street and town are unnamed and unidentified, almost without any obvious distinguishing features. People walking along the street are probably encountering a film camera for the first time. They stare into the lens and right back at us 109 years later. It’s a moving and hypnotic experience, connecting us to people who died many decades ago. It’s more potent than any photograph, like an Indian equivalent of one of Mitchell and Kenyon’s Edwardian films of workers leaving the factory for the day. 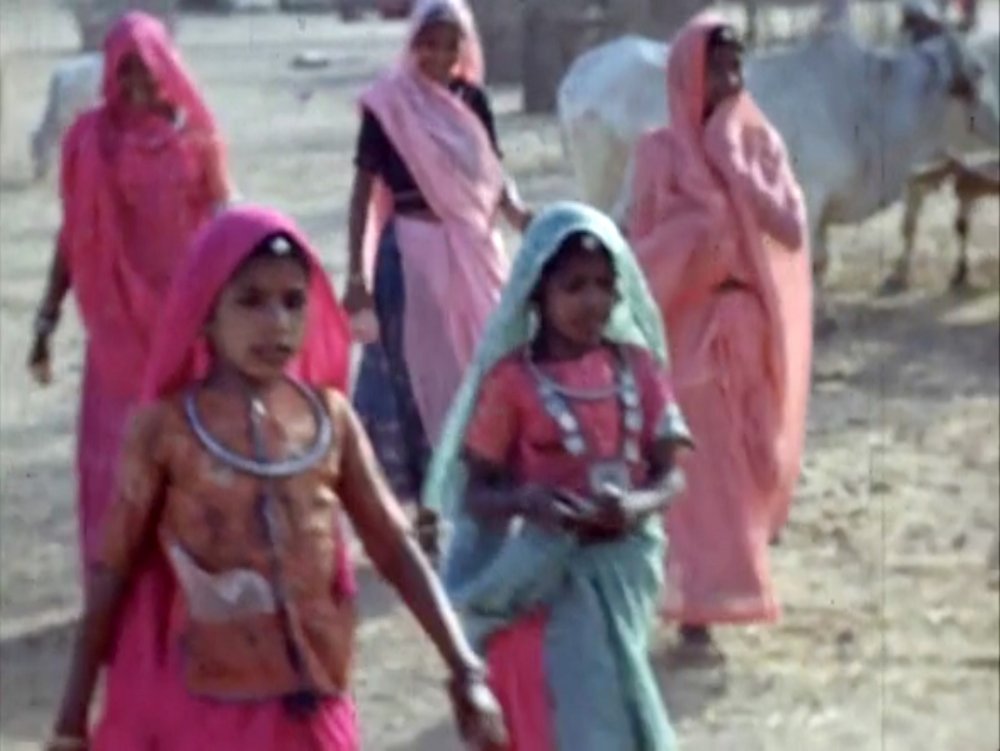 Cumulatively, the films offer an extraordinary social and political story of India in the last decades of the Raj, fleshing out textbook facts with real people and tangible places. Sometimes the major players just have walk-on roles (Mahatma Gandhi has about as much screen time as young Mary Craster, daughter of one of the filmmakers). But this alternative history still captures some of the biggest issues: from India’s contribution to two world wars to the rise of the independence movement and the start of the terrible human cost of Partition.

I hope that this project encourages others who hold early representations of India on film to make them available. Too much Indian film heritage has been lost, so it feels like a global responsibility to share whatever survives – even if it doesn’t always show the history we might wish to see.