Dubbed the Oscars of specialist video, the EVCOM Screen Awards this year recognised more than a hundred projects commissioned across the corporate and charity sectors. 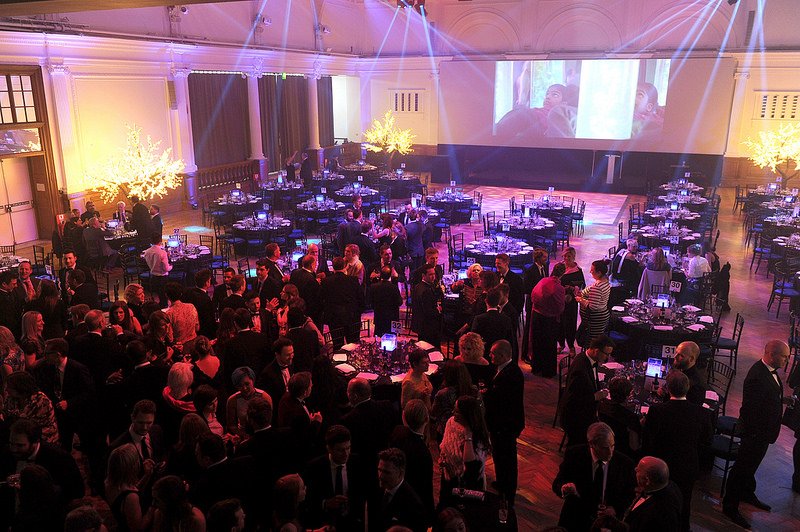 Thursday 28 April saw some 350 filmmakers and communications specialists gather for the EVCOM Screen Awards at Lindley Hall – recently newsworthy as venue for President Obama’s Brexit intervention. Sometimes dubbed the Oscars of specialist video, the EVCOM Screens are, among other things, an instructive annual snapshot of this, our video age. Spanning the gamut of employers and brands, subjects, techniques, technologies, and objectives, it’s fascinating stuff whatever your own ideological take on the institutional world or the particular messages it’s sending.

EVCOM was formed in 2014, a convergence-era merger between events organisation Eventia and the film-focused International Visual Communications Association. The EVCOM Screens are rooted in the IVCA’s awards, started some 30 years ago (themselves, if you dig into the Jurassic era, picking up where the postwar British Industrial and Scientific Films Association, and the whole ‘Grierson’ tradition in public service filmmaking, had left off).

By my count, 64 awards went to corporate and 40 to public-sector and NGO projects, all having fought to the top of much longer longlists considered by numerous category juries (declaration: I chaired one of these panels). Last week’s silver, bronze and highly commended awards are therefore no small achievement for commissioners (from HSBC to Stonewall to Birmingham Children’s Hospital) and producers (among them Casual Films, Woodsfilm, Radley Yeldar and Spectrecom). But to turn to this year’s gold winners…

The Edge Picture Company was undoubtedly one of the stories of the night, not for the first time. Quarter of a century in, a remarkable business and creative success shows no signs of flagging. Hard on the heels of being named best production company in New York (for the 10th year running), The Edge took eight gold and 10 other EVCOM awards (including a clean sweep of gold, silver and bronze in the health and safety category). It’s an impressively varied roster. Where The Essence of Qatar, which won best direction (courtesy Italian director Leonardo Dalessandri), is an ultra-polished ‘brand destination’ film, Cyber Choices (best script) sits in the tradition of witty thought-provoking public information. Where Ask Yourself… (commissioned by consultants Deloitte) is a memorable, majestically paced high-concept cultural diversity awareness-raiser, Depression (also an internal staff film) is deceptively artless and beautifully simple, based on telling line drawings (it’s viewable on Network Rail’s mental health microsite).

Mental health also provided the subject for this year’s best drama, Beyond Baby Blue, a film about post-natal depression by White Boat TV for charity Best Beginnings. Not yet on full release, it’s the sort of impeccably directed, sometimes harrowing filmmaking we’ve come to expect from White Boat who, since their breakthrough Barbara’s Story, have excelled at factually-based drama on sensitive social and clinical issues.

In quite different vein, Tangerine Films are the kings of car films. Among several awards, their high-thrills Jaguar F-PACE Launch Film took gold for marketing and promotion. Tangerine’s other gold was for the skilfully shot, lit and graded cinematography of this promotional documentary for Canon:

Plastic Pictures won the corporate social responsibility category with their Unilever commission Scaling for Impact, and the new Screen Innovations award for Lockheed Martin project Environmental Solutions Centre. And give this Battersea Dogs Home conscience-pricker, by producers Armoury, a look (and listen) and you’ll quickly see (and hear) why it won best music:

The winners list also indicates the growing presence in filmmaking, alongside ‘traditional’ production companies, of multimedia agencies: witness the coveted award for production company of the year going to Media Zoo, who also won best documentary for their INEOS-sponsored film Arion 1. The Contra Agency took several gongs including golds for their ingenious The Next Great Idea, commissioned by Cambridge University’s commercial arm and the very different Glitch. Produced for homeless organisation XLP, it won best charity film and also the rare distinction of being publicly named runner-up for Evcom’s top platinum award.

And so to the platinum award for the winner-of-winners. To get the nod from EVCOM’s top jury of senior comms practitioners will have meant impressing not only with expert screencraft but also with clear objectives, rigorous evaluation and measurable results. In an impressive surprise – encouraging to all filmmakers and clients working the less swish end of the street – this year’s platinum winner was in play thanks to taking EVCOM’s Laurus award, specifically recognising lower-budget productions.

And the winner is…What Is VJ Day? by RAW Productions for the Royal British Legion. It’s disarming, deceptively simple and proof that screen success ultimately rests on good ideas, good execution and good follow-through. See what you think: