If Rohmer films make you want to jump on the Eurostar, here’s your essential guide to some of his Paris locations. 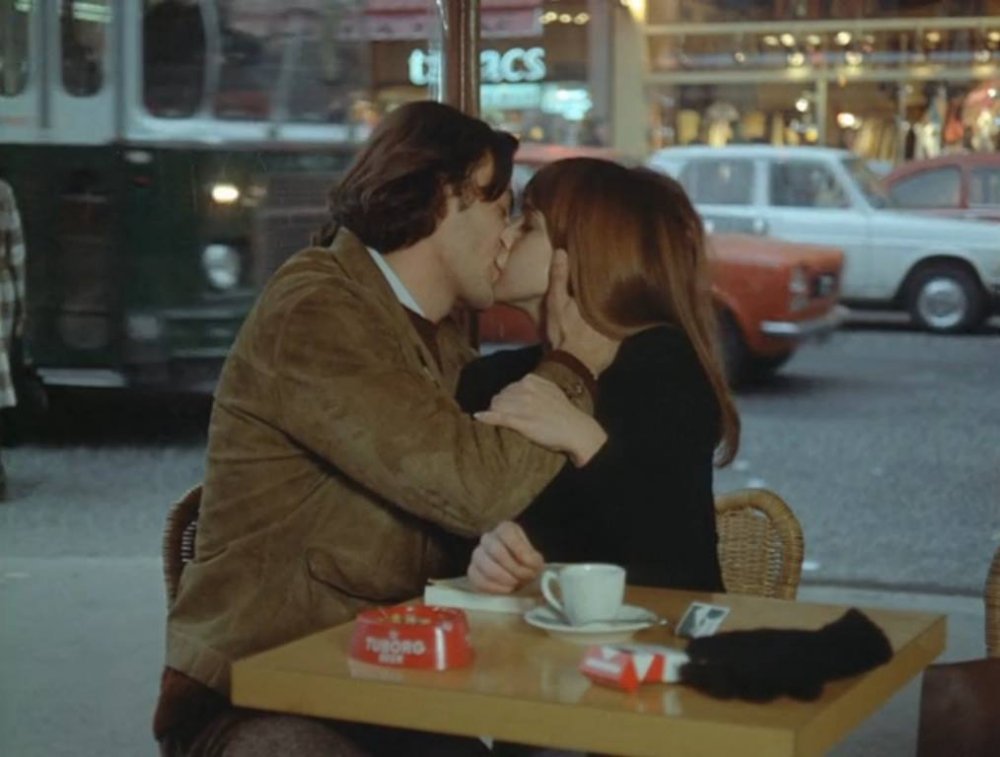 Viewed through Eric Rohmer’s lens, Paris is an enticing world of chance encounters. Picture a student sitting alone in a café on the Left Bank; she’s reading an Italian novel, sipping her espresso, when another student leans over and introduces himself. And so a story unfolds.

Such serendipitous encounters between strangers seem to fascinate Rohmer – meetings in parks, on buses, on trains. To enter his Paris is to lament a pre-Tinder age in which finding true love in a noisy café doesn’t seem so far-fetched.

When Rohmer filmed in Paris – that is, the majority of his career – he wasn’t afraid to show the less fashionable side of the city, from the Gare de l’Est at rush hour to the tourist-trodden bridges along the Seine.

His camera was capable of making every corner of Paris seductive, which means – when the screen fades to black – it’s hard not to book a Eurostar ticket to the French capital immediately after.

With that in mind, here’s a few locations that Rohmer fans should visit when they make the pilgrimage to the city so beloved by the French New Wave legend. 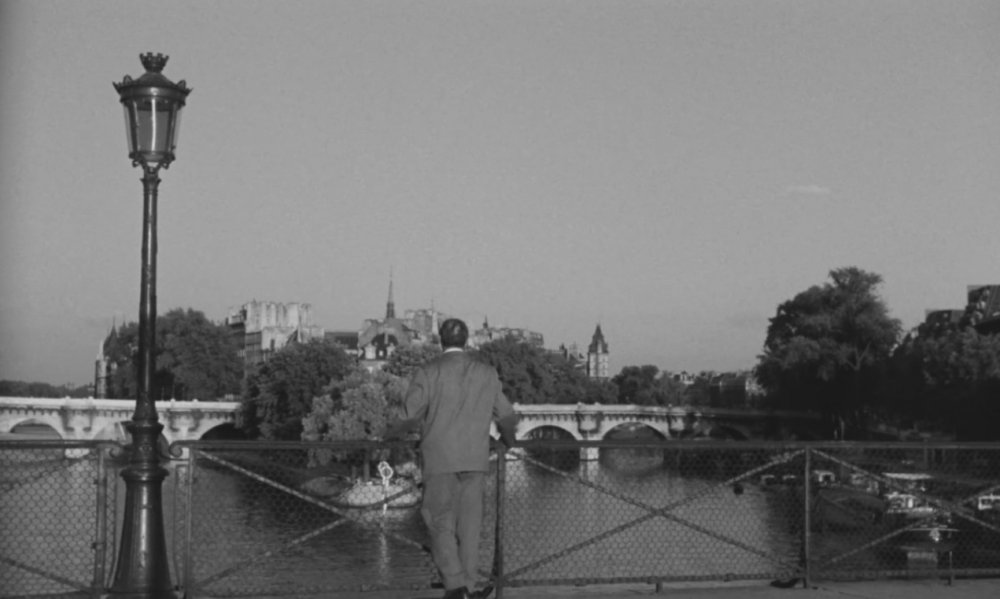 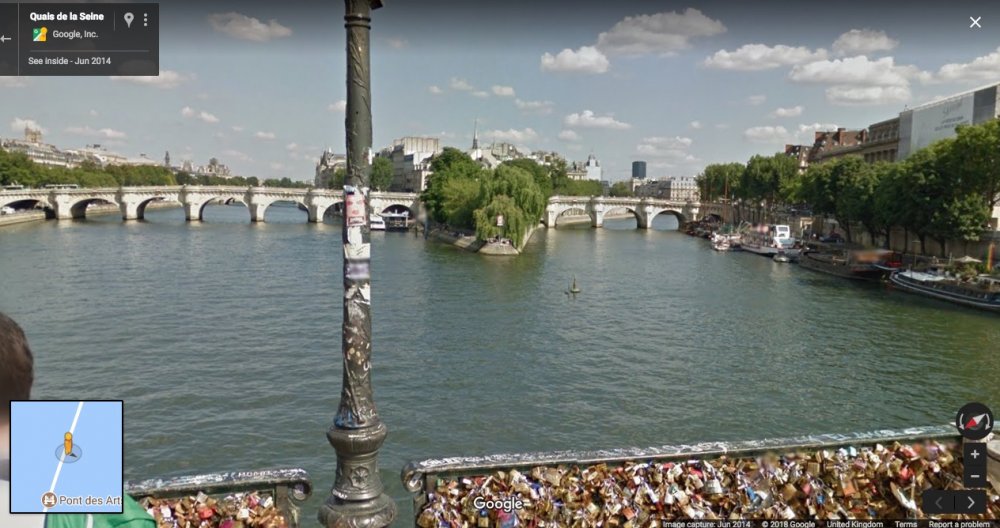 Rohmer’s feature-length debut, shot on location in the summer of 1959, is a treasure trove of Paris filming locations. A broke musician wanders the streets, selling books in order to eat, after wrongly thinking he’d inherited a ton of cash. The director films him outside the Crédit Commercial de France (now HSBC France), near the Champs-Élysées; then outside the Hotel de Seine, in the heart of the Left Bank arts district; then on the Pont de Neuilly, where the Seine bends round to the northwest.

In the iconic shot above, he’s on the Pont des Arts footbridge, overlooking the Ile de la Cité. The same bridge today is weighed down with lovers’ padlocks and plastered with stickers pleading you to ‘follow me on Instagram @…’ It’s a far cry from the desperation of Rohmer’s protagonist. The one thing that still rings true? You can’t do much in Paris without a wad of euros. 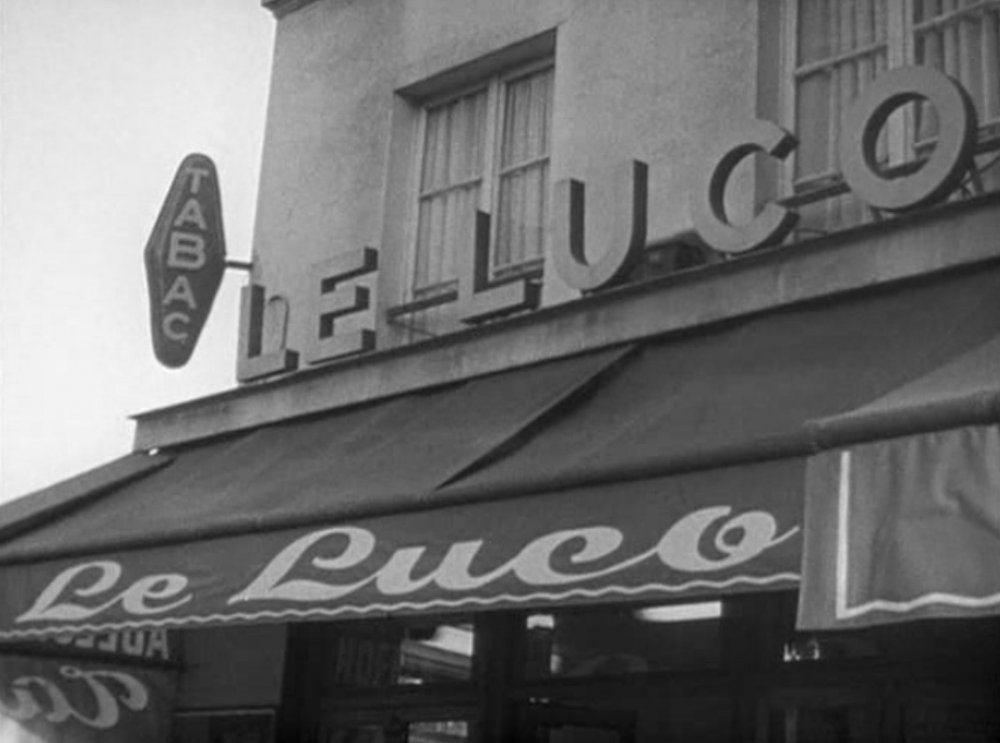 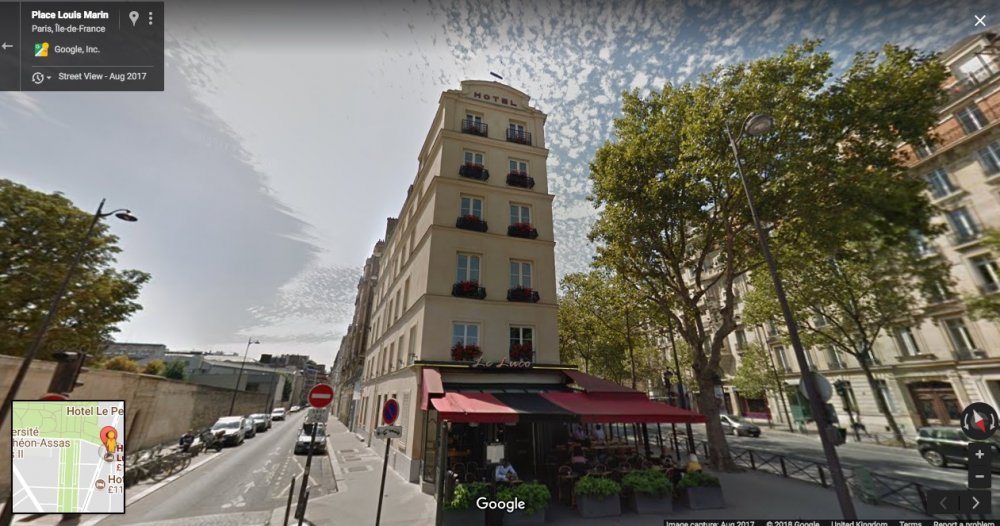 Le Luco is where the story of Suzanne’s Career begins. This is the café, on boulevard Saint-Michel, where Guillaume (Christian Charrière), who lives in the hotel above, meets Suzanne (Catherine Sée) reading an Italian novel. Rohmer’s second ‘moral tale’ – a love triangle about two male friends, one brash, one timid, and an independent student called Suzanne – is completely centered around Le Luco. You can visit it today and discover a modern student vibe, given its proximity to the Sorbonne. It’s also worth noting that the same boulevard – a stone’s throw from Le Jardin du Luxembourg – also pops up in both Le Signe du lion and Full Moon in Paris (1984). In other words, an essential stop on your Rohmer tour of Paris. 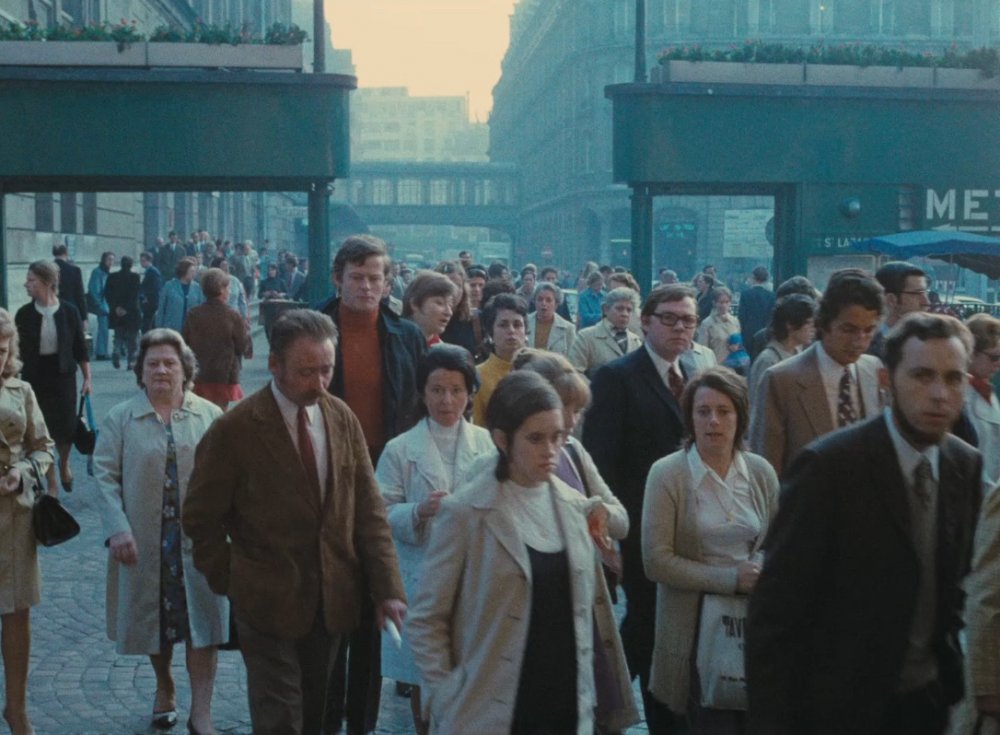 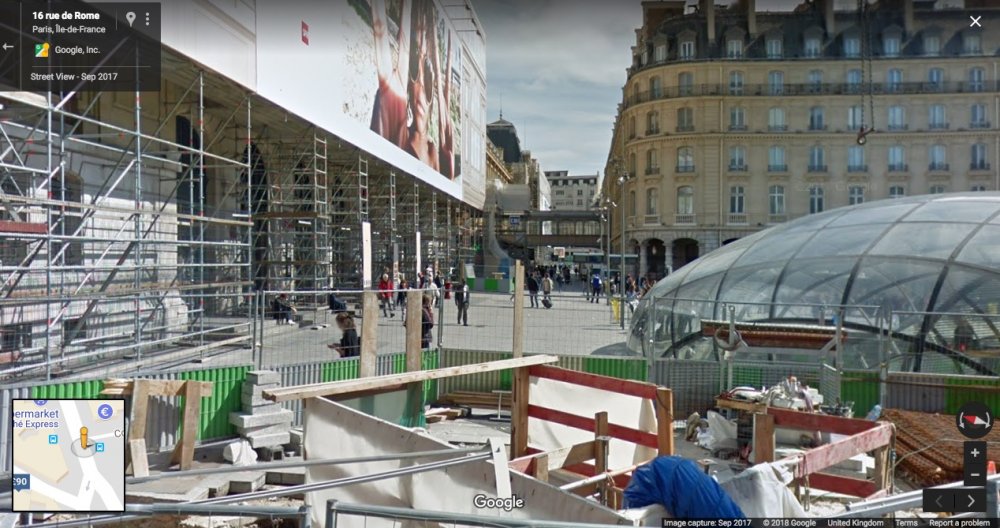 This tale of marital infidelity follows Frédéric (Bernard Verley), a happily married lawyer who finds himself ogling women in the street and pursuing an old flame, Chloe (Zouzou), with whom he spends many a furtive afternoon in the city. Most of the film was shot around the Saint-Lazare train station, close to Frédéric’s office.

The above shot, filmed from the rue de Rome, shows what’s basically commuter central – it’s been flooded with office workers before and ever since Rohmer planted his camera here. In the background, you can see the footbridge attached to the ‘Hotel Terminus’ on the right. It’s now the Hilton Paris Opera. All of which is to say: it’s not exactly the cool Montmartre you see in other French New Wave films, but it’s precisely the place that befits Frédéric. 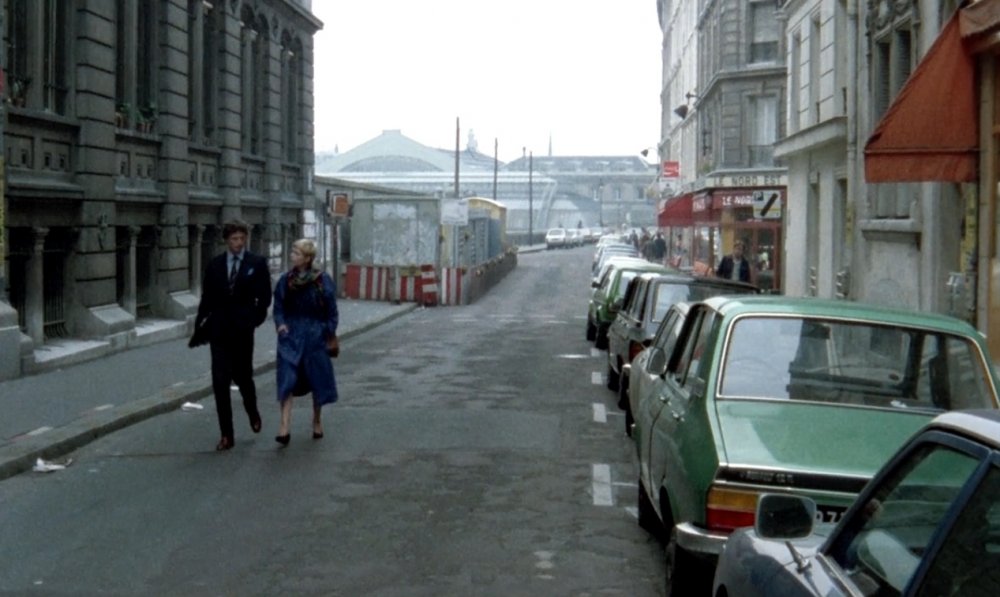 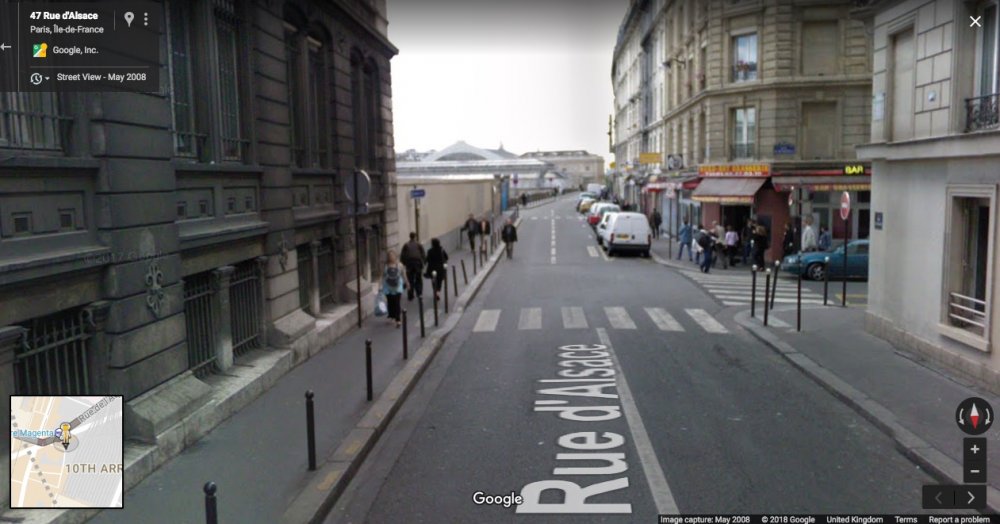 Another film about the problems of lovers and would-be lovers on the streets of Paris, The Aviator’s Wife sees a young student who decides to follow his girlfriend’s ex. The student spots the man sitting with a blonde in a café in the enormous Gare de L’Est. From there he follows them down the rue d’Alsace, above, towards a bus stop on the rue la Fayette. You can just make out the Nord-Est brasserie on the right, and to the left the smog-stained station offices (still in need of a good scrub). Other notable spots in the film include the Pereire Métro station and the Buttes Chaumont park, where Gaspar Noé shot parts of Love (2015). 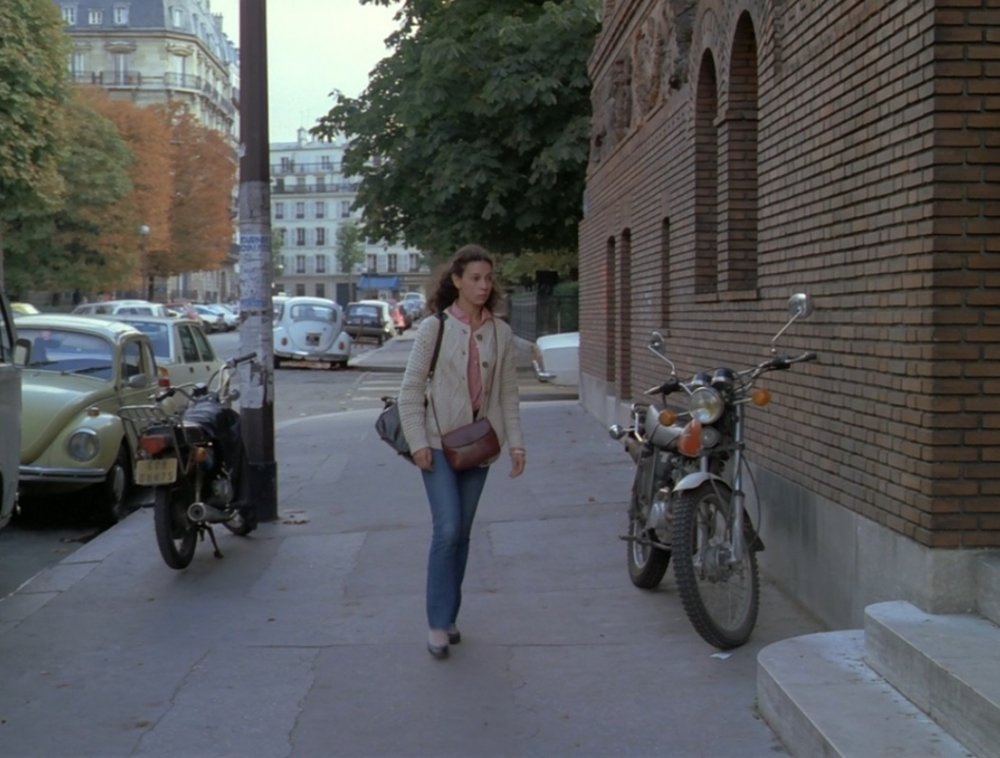 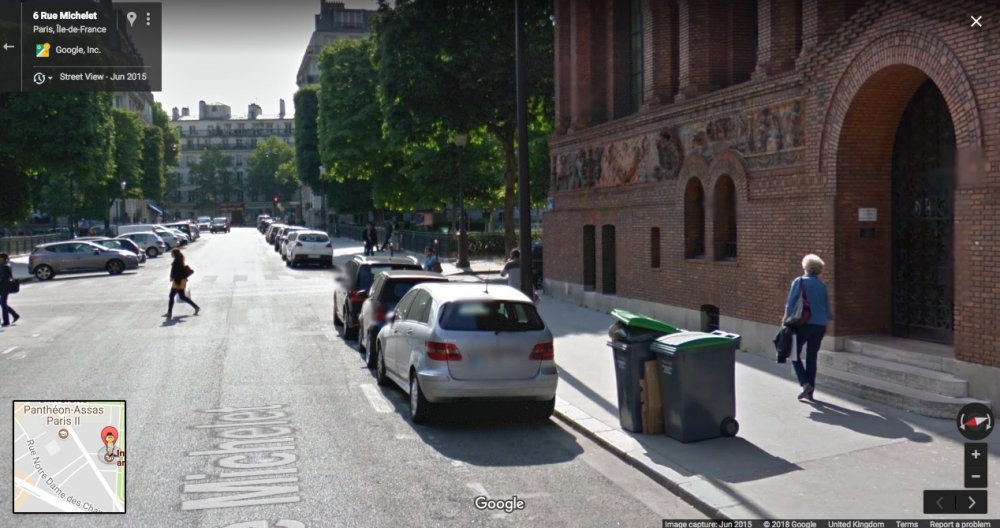 Art student Sabine (Béatrice Romand) is sick of her married boyfriend and her dead-end job so drops both and pursues a relationship with an older attorney. As the film opens, she enters the Centre Michelet library (above). It’s on rue Michelet, south of Le Jardin du Luxembourg, in spitting distance of the same boulevard Saint-Michel where Suzanne’s Career was filmed. The old motorbikes are no longer casually left by the front door, the VW Bugs have been replaced with sparkling new Fiats and Fords, and the trees have been shaped to look fancy. Those old red bricks, however, are unmistakable. Even in her 1980s garb, it’s not hard to imagine Sabine entering the same school today. 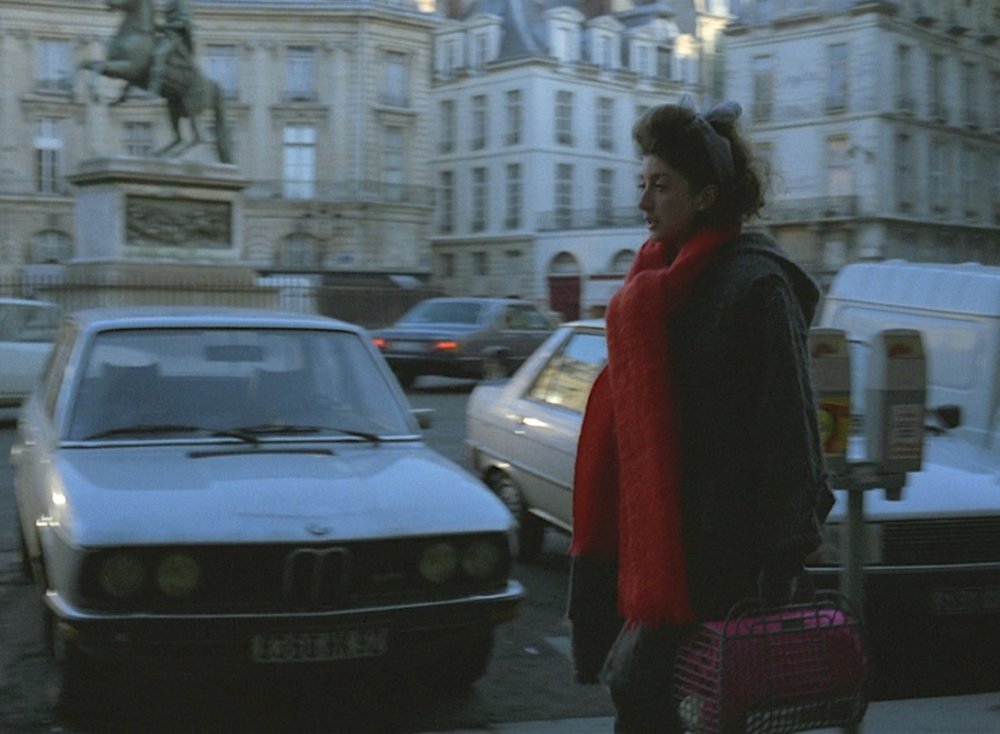 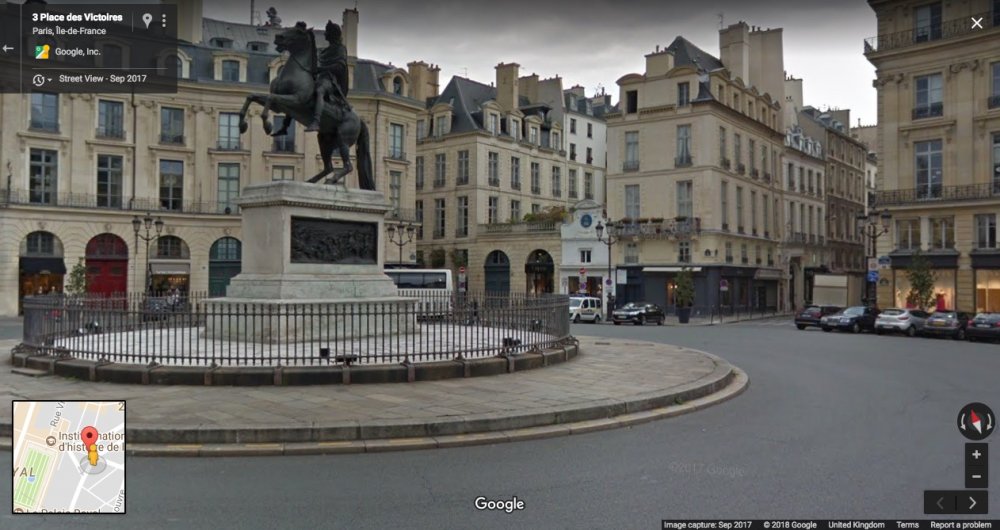 Party animal Louise (Pascale Ogier) works as an interior designer in Place des Victoires. She lives in a distant Parisian suburb with her boyfriend, who hates going out. Despite him, she spends her Friday nights hanging out with her colleagues in central Paris. Her office in the circular Place des Victoires, above, a short distance northeast from the Palais Royal. Behind her is the equestrian monument in honour of King Louis XIV. Those old parking meters were pulled out long ago, while the surrounding stores now include the Pronovias wedding dress company and a designer Italian womenswear store. The monument itself, presumably restored many times since Rohmer filmed this scene, still stands. You can almost see the ghost of Louise traipsing to work in the early hours after an all-nighter.

Four Adventures of Reinette and Mirabelle (1987) 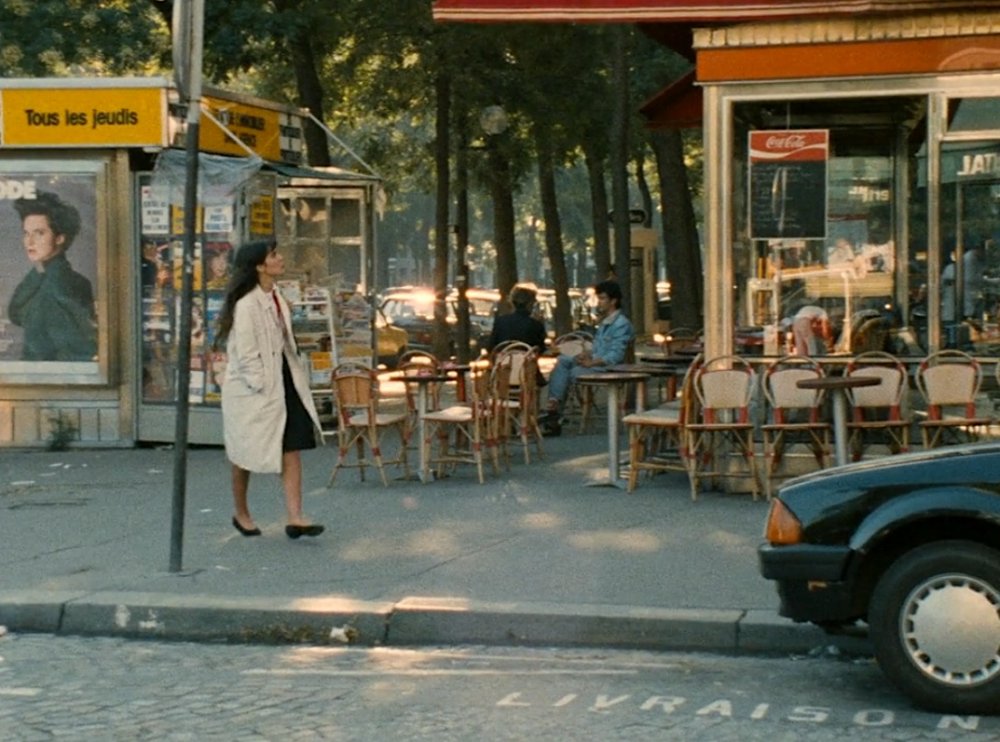 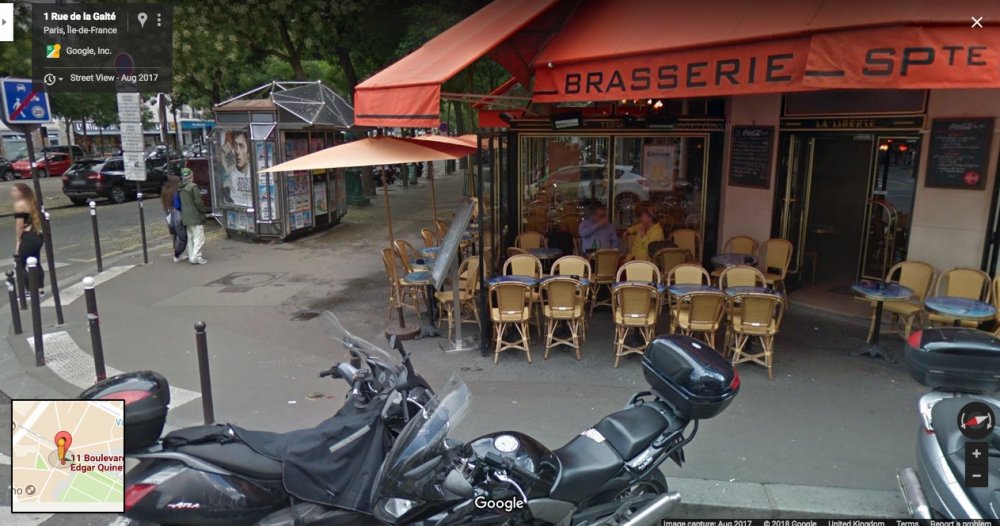 Four Adventures of Reinette and Mirabelle is exactly that: four stories about two young women, one a street-smart Parisian, the other a country girl. In the second adventure – the part that was filmed in the French capital – Reinette (Joëlle Miquel) waits for Mirabelle (Jessica Forde) at a café. As she waits, she has a hilarious exchange with a surly waiter who won’t accept her 200-franc bill. The café is La Liberte, on the boulevard Edgar Quinet, in Montparnasse. Not only is the café still standing, the newsstand remains too, with an uncannily similar ad on the side. This is the ideal place to raise un café to Rohmer. 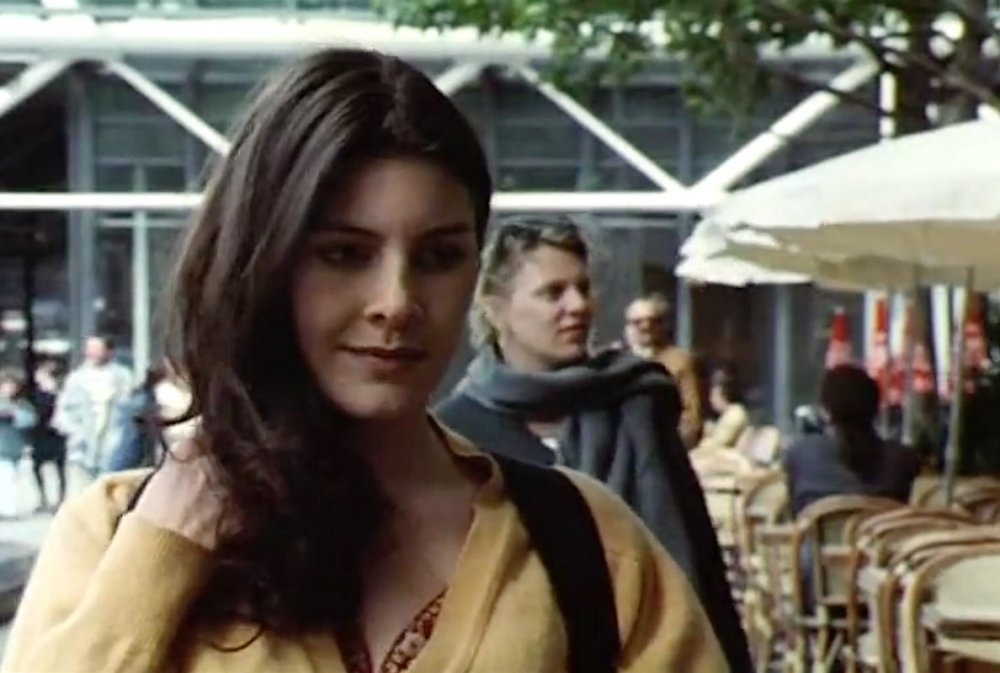 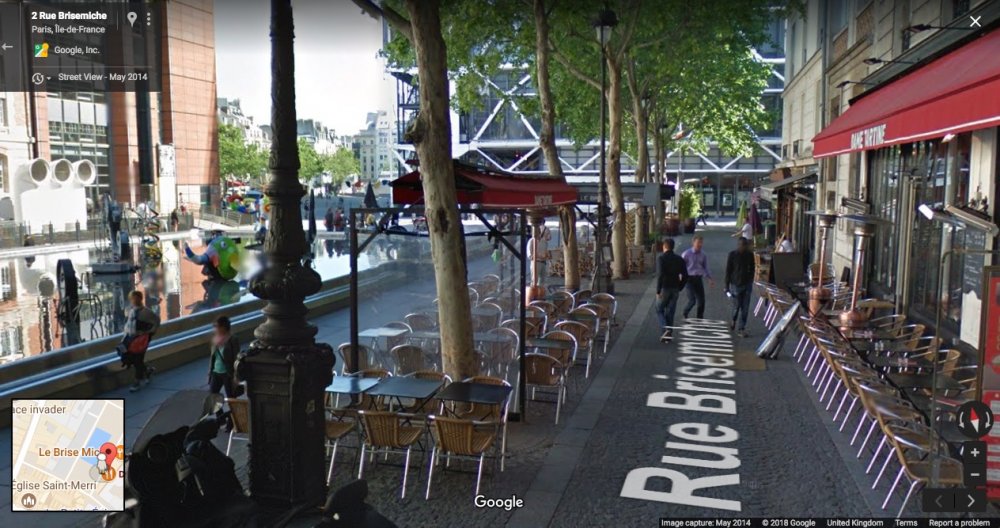 Rohmer’s anthology film features three loosely connected stories about lovers’ rendezvous in Paris. In the first, a female student discovers that her boyfriend is cheating on her. By chance, she’s led to the exact location of the rendezvous, a part of Paris she claims to dislike; namely the area surrounding the Centre Pompidou.

The café is the Dame Tartine, right next to the Stravinsky fountain. More than 20 years later, the café is still serving gallery-goers. Eagle-eyed viewers will note the small differences: wood-and-wicker chairs replaced with metal-and-wicker; individual umbrellas replaced with one big canopy. Ultimately, Rendezvous in Paris, along with Paris, je t’aime (2006), is a fragmented love letter to the French capital. Drink in its locations, then go book that Eurostar ticket.