Wednesday 24 April sees a very unusual – and special – screening event at BFI Southbank. For one night only, across two programmes, a selection of twin-projection films will be presented on the biggest screen in the building: the majestic NFT1.

Apart from a record of an original 1970s expanded cinema event screening on video, each work will be presented on its original 16mm format. For each title, it’ll be like watching two films projected simultaneously, side by side. This is no playful accident though. Each film was made and edited to be shown in precisely this way.

Having two projected images to play with creates all sorts of new possibilities for the filmmaker. Relationships between shots and images can be explored not just sequentially – ie one after the other in time – but simultaneously and across the physical space of the cinema screen. Live events recorded by two cameras can also be replayed to retain the perspectives of both devices, creating an effect something like visual stereo. Informed by the multi-media light shows and happening events of the 1960s, twin-projection films can be both mesmerising and utterly engaging.

Said Malcolm Le Grice in his 1977 book Abstract Film and Beyond, “[The development of] multi-projection has come in one way or another through treating projection as the primary area of film’s ‘reality’. For the film’s audience, the only point of contact with cinema as material reality comes through the actual time and space of projection.”

Many multiple projection films were made in the early 1970s, typically using the custom-made film printing and processing facilities available at the London Filmmakers’ Co-operative. LFMC members were often concerned with the formal and physical qualities of celluloid. Malcolm Le Grice, himself a member, frequently used the optical film printer that allowed filmmakers not only to superimpose images on film but also to repeat and manipulate them, or to introduce new colour fields and solarisation. 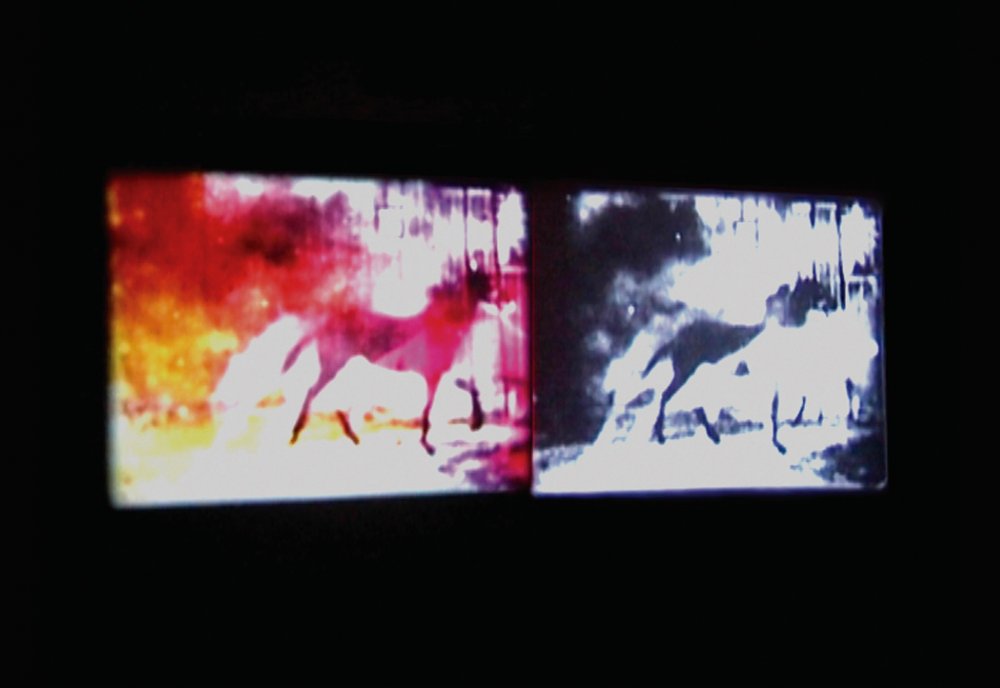 He explored the possibilities of these effects over a series of 16mm films including his twin-projection films Berlin Horse (1970; also made as a single projection film) and Castle Two (1968), both screening on 24 April. Sharing that bill are Mechanical Ballet (1975) by David Parsons and Choke (1971) by David Crosswaite, made in the same critical environment, with the same facilities. While these films are informed by critical thinking around dominant or mainstream cinema, they have the power to engage and move even viewers entirely unfamiliar with avant-garde ideas.

Over the last 20+ years, multi-projection cinema has in many ways returned whence it came: the gallery via the installation and the night club courtesy of the VJ. But films from the 1970s – and later work made under their influence – still retain a particular energy and directness, not least because of their grounding in mechanics. There’s no digital synch or composite image when these films are projected as originally intended.

This was important to James Scott when making his 1971 twin-projection film The Great Ice Cream Robbery. Sponsored by the Arts Council, it tells the playful story of artist Claes Oldenburg’s 1970 exhibition at the Tate Gallery, incorporating Super 8 footage shot by Oldenburg himself and the story of a stolen and eventually overturned ice-cream cart.

Although not a member of the LFMC, Scott was influenced by the notions of chance as championed by artist and musician John Cage, and enjoyed the fact that – due to variations in projector running speeds and the likelihood that projectionists would start the film every-so-slightly out of synch – The Great Ice Cream Robbery would be slightly different each and every time it was screened. This would potentially revitalise the cinematic experience and highlight the pure image and tonal qualities of the picture.

Multi-projection films are clearly more difficult to present than a traditional film and maybe that’s why many of these works aren’t as well known as they should be. Le Grice’s Berlin Horse also exists in a single-screen version and this has certainly helped its reputation – along with the extraordinary deftness and beauty with which Le Grice composited and manipulated his source material (taken from the early cinema film The Burning Stable and Super 8 footage shot in Berlin).

Since these works are difficult to see, it’s great that Tate Modern and Camden Arts Centre have presented expanded cinema works in the last year, and I’m looking forward to presenting these programmes on BFI Southbank’s biggest screen on Wednesday 24 April. This will be a very special occasion for the BFI and I hope that the spectacular, disruptive and groundbreaking possibilities of these films will once again strike people forcefully when they see them in a traditional cinema auditorium – a space designed with a very singular type of viewing experience in mind.