The troubled history of Don Quixote on film

We’ve lost many famous faces in 2016, but in April 1616 the deaths of two titans of world literature are dated within 24 hours of each other. In comparison to Shakespeare however, Miguel de Cervantes’ most famous work has given filmmakers a lot more bother… 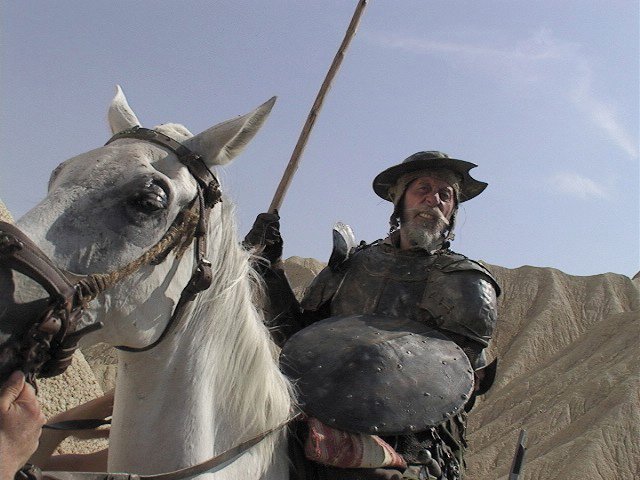 Since it was first published in 1605, Miguel de Cervantes’ great novel Don Quixote has been a source of enduring fascination for many filmmakers, bringing to mind Italo Calvino’s definition of a classic as “a book that has never finished saying what it has to say”.

Cervantes’ book tells the story of a middle-aged man, obsessed with tales of chivalry, who reimagines himself as a knight, riding out into the world in pursuit of adventure, accompanied by his squire, Sancho Panza.

Often considered the first true novel, Don Quixote remains by far the most famous work by a man who is widely regarded as the greatest writer in the Spanish language. How tantalising then to remember that the date of Cervantes’ death 400 years ago in April 1616 is the day before that given for his opposite number in the English language: William Shakespeare.

But while the bard is the most adapted writer in the history of cinema, those filmmakers drawn to tackling Don Quixote on screen have, time and again, found themselves tilting at windmills. Here are some of the more notable cinematic Quixote projects. 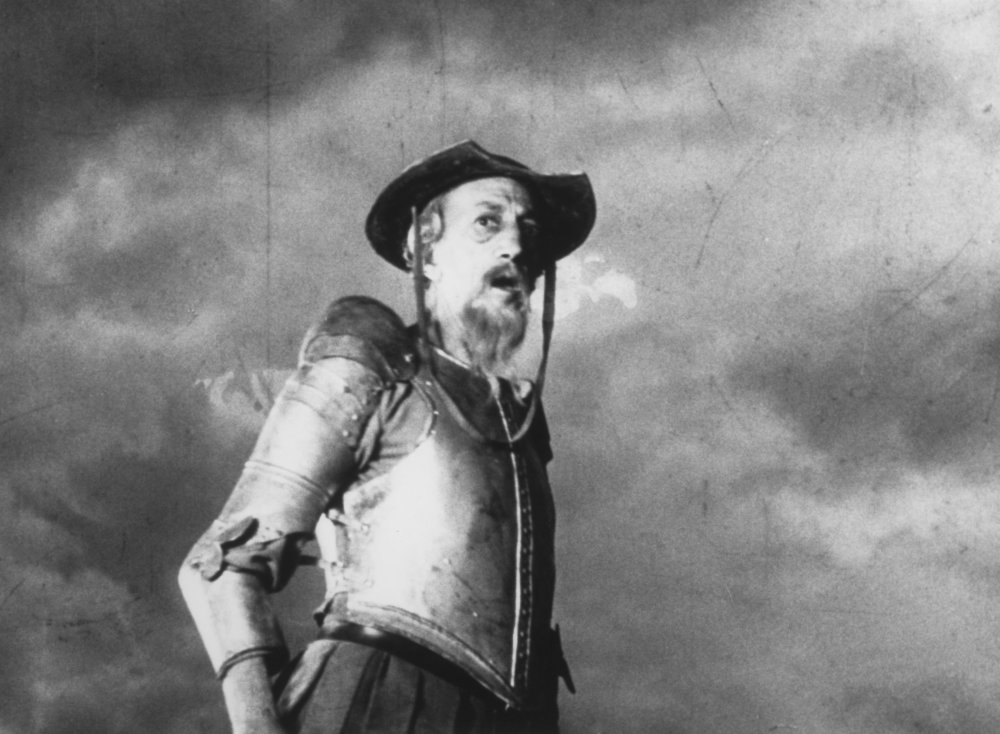 Having been removed by Hollywood studio bosses from the final edit of his film Touch of Evil, Welles quit town and headed for Mexico where he began the torturous, decades-spanning production of Don Quixote. The self-financed film remained unfinished upon Welles’s death in 1985. By then he had amassed 300,000 feet of film. Welles never completed what he considered a definitive adaptation.

In 1992 film director Jess Franco and associate Patxi Irigoyen ‘restored’ the film but not to any great acclaim. The print was impoverished and lacked clarity and Welles’s commentary and dialogue had been ineffectively dubbed into Spanish.

Welles’s original conceit turned on the idea that Quixote and Sancho Panza actually exist in the 20th century. One scene depicts Quixote and Sancho in a cinema. Quixote sits very still, captivated by the moving images. When a lavish battle scene fills the knight’s view, Quixote rushes to the screen, raises his sword at the action and finally slashes into the screen. Fantasy and reality are hard to distinguish: the blessing and curse of cinema, perhaps. 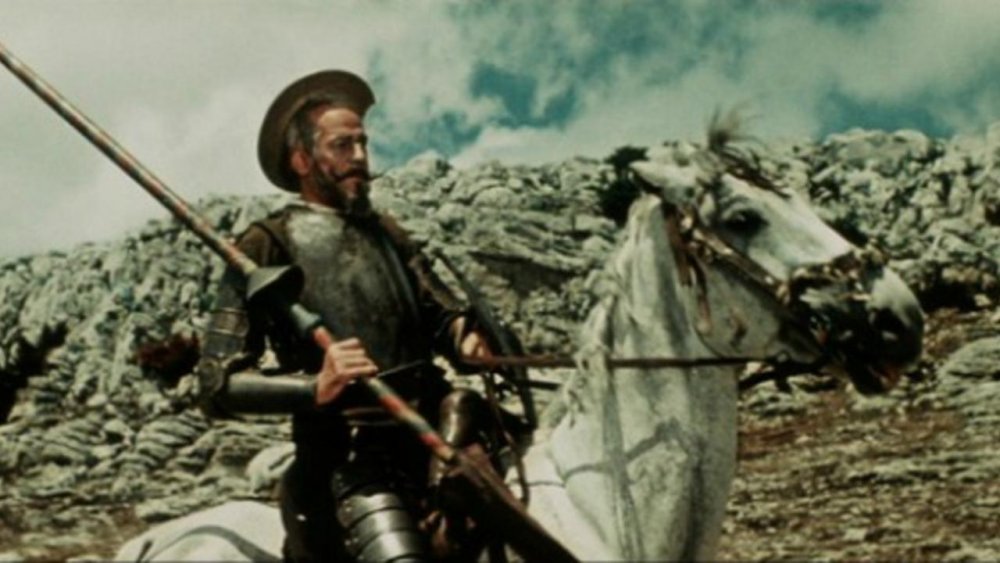 In 1957 a lush Russian version of the novel was released. It’s now considered the best Quixote adaptation yet made. Directed by Grigori Kozintsev (who also made excellent versions of Shakespeare’s Hamlet and King Lear for the screen) and shot on location in the Crimea, the film was the first colour film version of Quixote to have been produced. It’s hugely entertaining and quite beautiful too, getting at the novel’s weave of broad comedy and pathos.

The film has a very deliberate pace and its use of Russian rather than Spanish lends the performances naturalism and authenticity. Understandably abbreviating the immense novel, the film nonetheless brings vivid life to the key sequences. 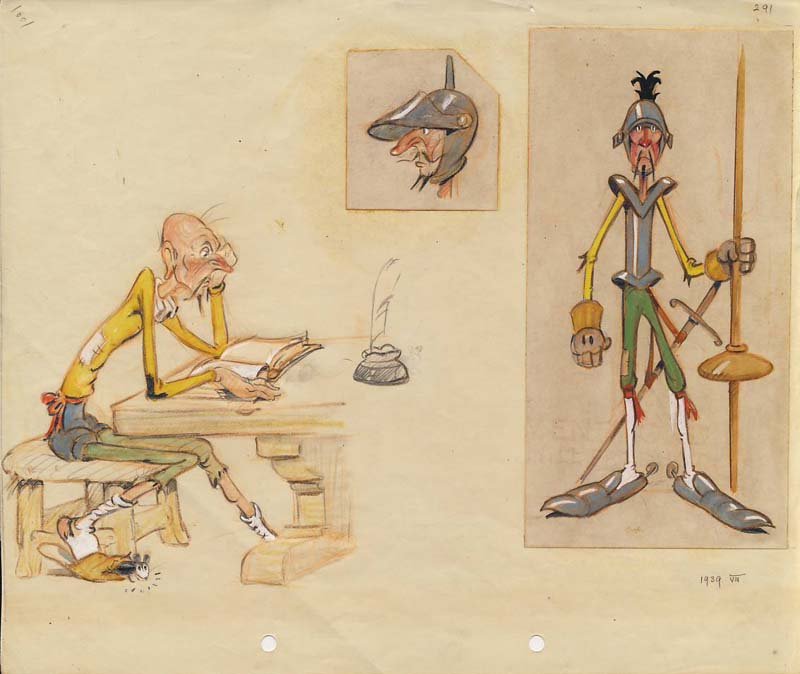 Walt Disney recognised the possibilities in adapting the Cervantes novel and, over several decades, tried to manifest Quixote in animated form. It’s highly likely that a Quixote adaptation was developed as one of the Disney studio’s Silly Symphony shorts. Studio artist Ferdinand Horvath rendered a wonderfully vivid set of concept sketches, including one of Quixote armoured-up, looking out at us from the page. Another Horvath image gets at the heart of Quixote, showing him lost in his reading by candlelight.

Conceptual art for a feature film was further developed in 1940; its visual approach partly informed by the work of Spanish artist Diego Velázquez. However, the limited film distribution patterns occasioned by the Second World War, combined with the commercial failure of Pinocchio (1940) and Fantasia (1940), interrupted development.

Another attempt, made in 1946, focused on adapting Richard Strauss’s 1897 tone poem Don Quixote: Fantastic Variations on a Theme of Knightly Character for Large Orchestra. Again, the project didn’t cohere. In 1951 the Disney studio tried again, this time exploring an increasingly simple visual design. A striking concept art from this go-round shows Quixote on his horse riding towards windmills that have transmogrified into truly monstrous forms. As recently as the late 1990s another attempt was made but was abandoned, studio heads considering it too adult. 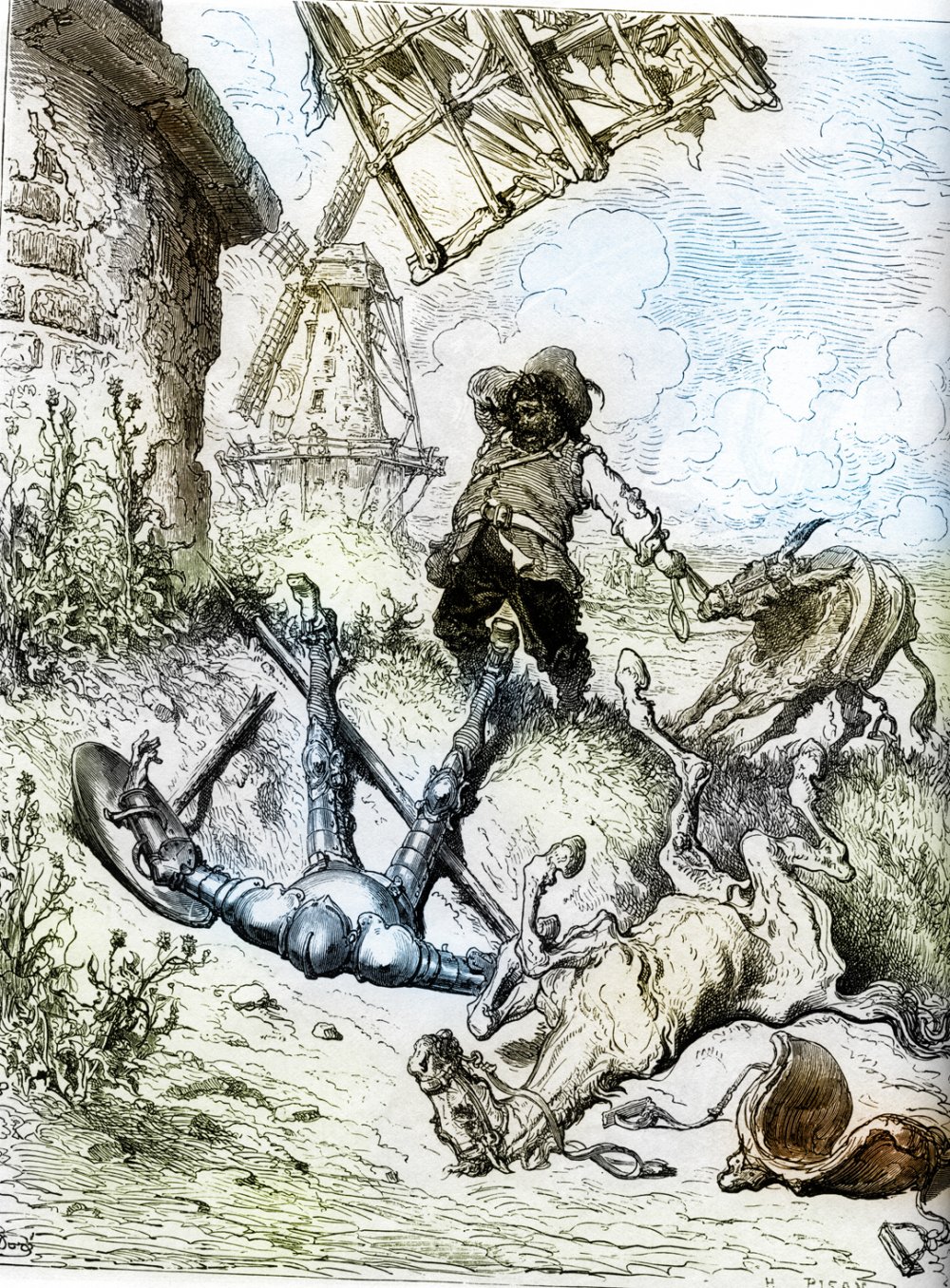 Drawing for Terry Gilliam's version of Don Quixote, from Lost in La Mancha (2002)

Terry Gilliam’s affinity for the figure of Don Quixote, and the ideas embodied by the character, have manifested themselves in each of his movies, and since 1991, Gilliam has wrestled to bring Cervantes’ novel to the screen. Gilliam’s initial, ultimately beleaguered, attempt is captured in the documentary Lost in La Mancha (2002). We see weather besiege Gilliam’s location with a flash flood. Then the film unit discovers that one of their locations is sited below a Spanish Air Force flight path. Jean Rochefort, portraying Quixote, is stricken with illness. Beyond these hurdles, the documentary also offers us a palpable sense of Gilliam’s overarching creative ambition and the tone he was attempting to strike. At the time he described it as “Quixote through the looking glass”. Determinedly, Gilliam is currently developing a revised take on his original concept for The Man Who Killed Don Quixote. 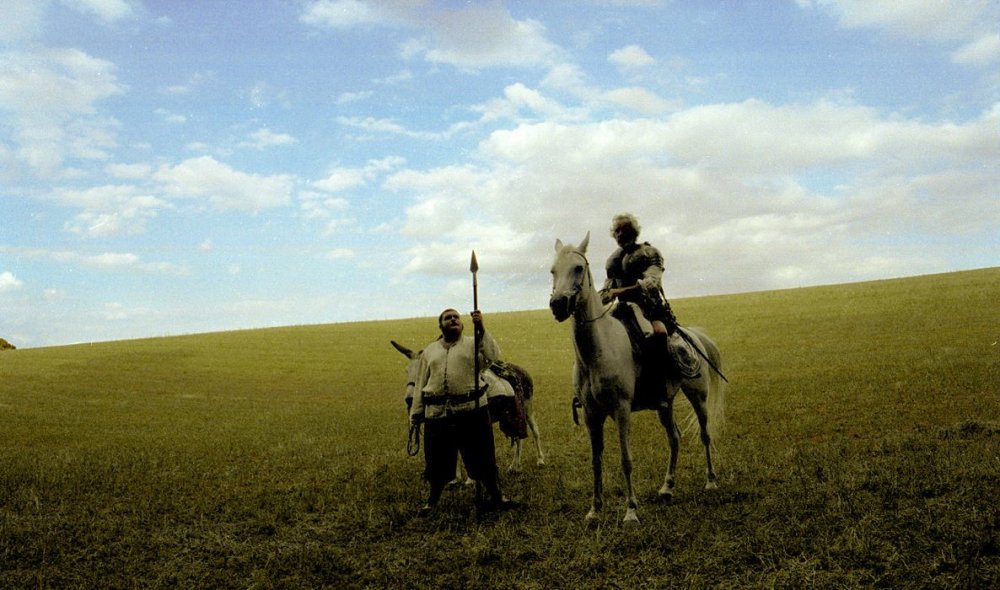 It seems fitting that the most notable recent attempt to bring Quixote to the screen should have come from Spain itself, even if filmmaker Albert Serra made the provocative decision to use dialogue in his native Catalan rather than Spanish. His visually superb, minimalist Honour of the Knights (2006) won’t be the Quixote film for everyone: for much of the running time Quixote and Panza are seen aimlessly lying around in parched fields, as Serra strips the adventure back to its sparse, diurnal rhythms, with little action beyond the evident camaraderie between the two men. But this is a low-budget Quixote for the digital age, distilling much of the essence of the novel in a manner that had eluded some filmmakers with more money to spend.

Will Quixote again find a 21st century home on screen? Will a treatment ever be able to capture the allure of this timeless story of chivalry as Orson Welles described it? “What interests me is the idea of these dated virtues and why they seem to speak to us, when by all logic, they are so hopelessly irrelevant.”