As the Tate mounts a major Barbara Hepworth retrospective, we look back at an early BFI film of the artist at work and explore the boundaries between art and mainstream media. 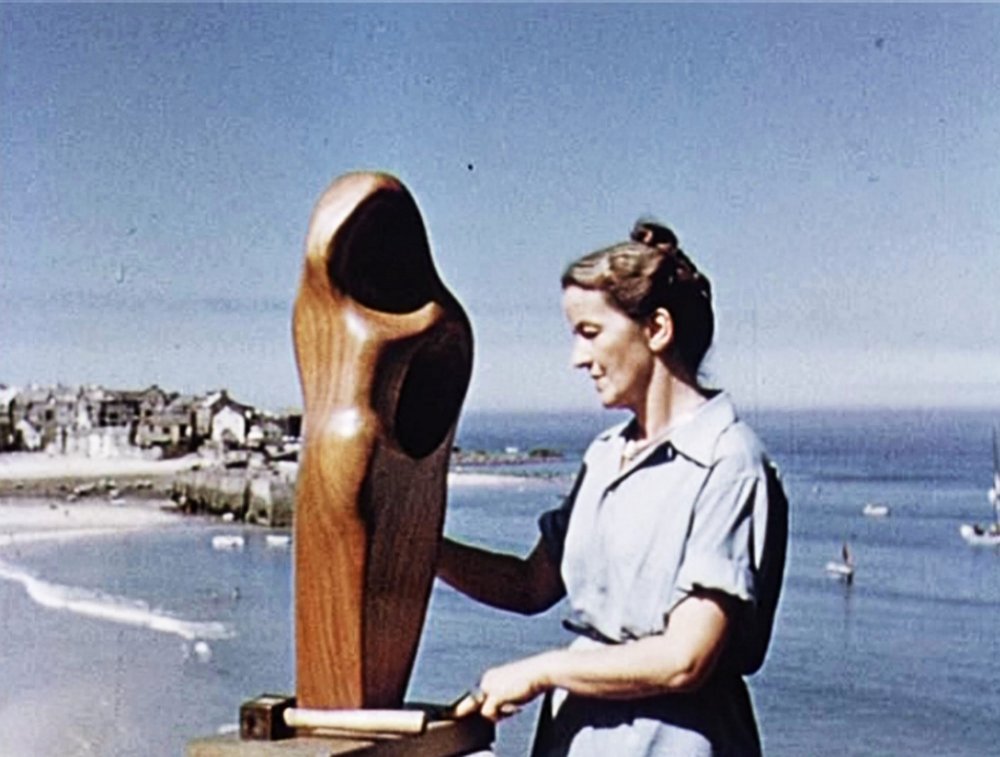 “While always remaining constant to my conviction about truth to material, I have found a greater freedom for myself.” – Barbara Hepworth, 1968

The exhibition Barbara Hepworth: Sculptures for a Modern World opens at Tate Britain on 24 June and runs until 25 October 2015.

This summer, Tate Britain is launching the first London retrospective for five decades of the work of sculptor Barbara Hepworth, highlighting her enduring legacy in modern art. Barbara Hepworth: Sculptures for a Modern World features 70 widely known and less familiar carvings and bronze works, together with pieces by her predecessors and peer artists including Ben Nicholson, Jacob Epstein and Henry Moore. But what is special in the Tate’s exhibition, carefully crafted by its curators, is that Hepworth’s vision of modernity is examined through rarely seen works alongside rare historical material, archive photographs and Dudley Shaw Ashton’s film Figures in a Landscape (1953).

An imaginative Technicolor documentary about Hepworth’s work, Figures in a Landscape was one of the first films backed by the BFI Experimental Film Fund, granting filmmaker Ashton incredible access to Hepworth’s Trewyn Studio (now the Barbara Hepworth Museum and Garden) in Cornwall and the Cornish settings that inspired her work. Its innovative use of camera movement around Hepworth’s still sculptures in the Cornish landscape, alongside composer Priaulx Rainier’s radical score and poet Cecil Day-Lewis’s narration of writer Jacquetta Hawkes’ words, make it a collaborative artwork in its own right. It spearheaded an alternative British art cinema that ultimately became the focus of the Experimental Film Fund (1952-99) during its nearly 50-year operation. Apart from shedding a new light on Hepworth’s work, Ashton’s film has, in Dutch documentarist Henri Storck’s words, a “unique and mysterious quality”. In his review of the film, Storck explains:

“There is no doubt that Barbara Hepworth’s sculptures are in themselves works of great beauty; but Dudley Shaw Ashton’s purpose is more exacting, he is not content merely to let us share his admiration for them, he attempts to draw us into the heart and truth of her work. As his film reveals itself he behaves as though this beauty did not exist; he makes no attempt to impose it on us, instead, he waits tranquilly for the beauty itself to bear witness to its truth: he treats it as a jeweller treats a diamond when he sets it in a piece of jewellery and waits for the result of his work to dazzle us.” 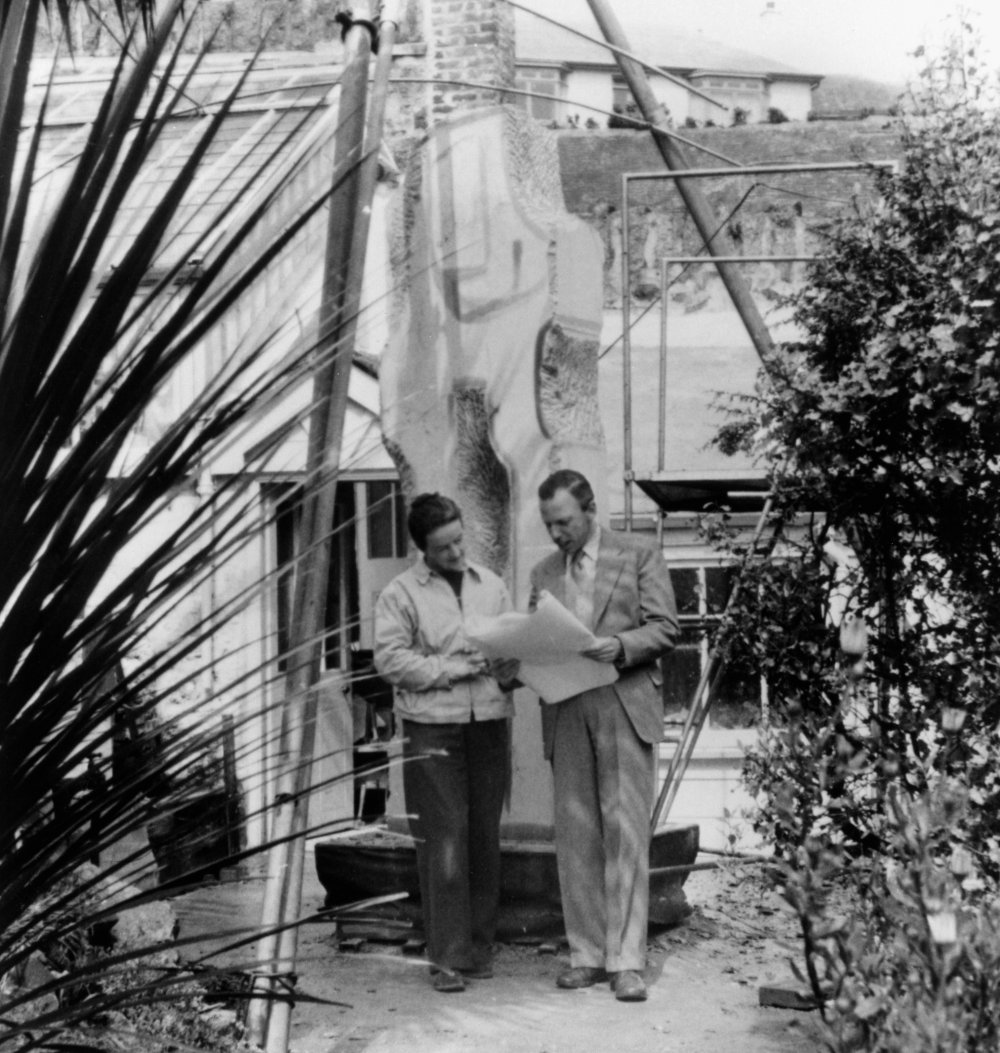 Yorkshire born, Hepworth (1903-75) is known for being one of abstract art’s pioneers both nationally and internationally. Like many other abstract artists who followed her, she broke free from the direct representation of the world around us, creating a new visual language in stone, wood and bronze. While studying at Leeds Arts School and later at the Royal College of Art in the 1920s, Hepworth, together with fellow student Henry Moore, went against common practice by carving directly into stone, rather than creating models in clay. With the Second World War looming, in 1939 she and her husband Ben Nicholson moved to St Ives, leaving behind their Hampstead home and their ‘nest of artists’. 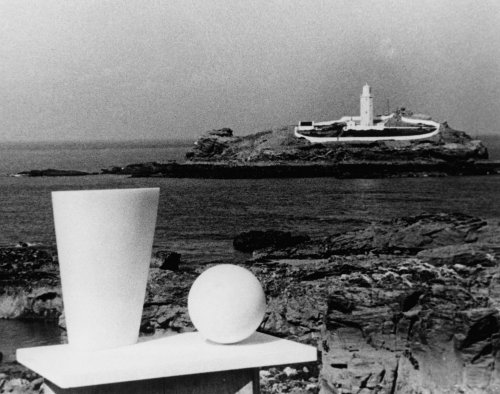 Production still from Figures in a Landscape (1953) with Hepworth’s Conoid, Sphere and Hollow 1937

Finding new inspirations in abstract geometric forms in Cornwall during the 1940s, she became fascinated by our relationship with the natural world. Always engaged with the artistic debates of the day, Hepworth embraced new technology and employed photography, performance and film in her work to open up the sculpture form in order to involve the viewer.

Ashton’s 1953 film came two years after Hepworth’s participation in the Festival of Britain in 1951 with her monumental figures Contrapuntal Forms (1950-51), carved in Irish blue limestone. This was her first public commission, which she received from the Arts Council. Incidentally, the BFI’s first involvement in film production was also for the Festival of Britain. With the opening of the Telekinema, on the site of what is now BFI Southbank, the Festival Office had commissioned Norman McLaren’s 3D films to be shown in the dedicated film theatre, which was designed to showcase documentary, experimental film and a new invention – television. This led the BFI to launch its own Experimental Film Fund the following year, with its modest funds during postwar Britain’s reconstruction the only source of public funding for documentary and experimental film. In 1965 the fund was given the new name of the BFI Production Board, under the leadership of Bruce Beresford as head of production. It aimed to provide new equipment to budding British filmmakers, offering a springboard for future greats, including Ken Russell, Ridley Scott, Nick Broomfield, Terence Davies, Mike Leigh, Peter Greenaway and Horace Ové. 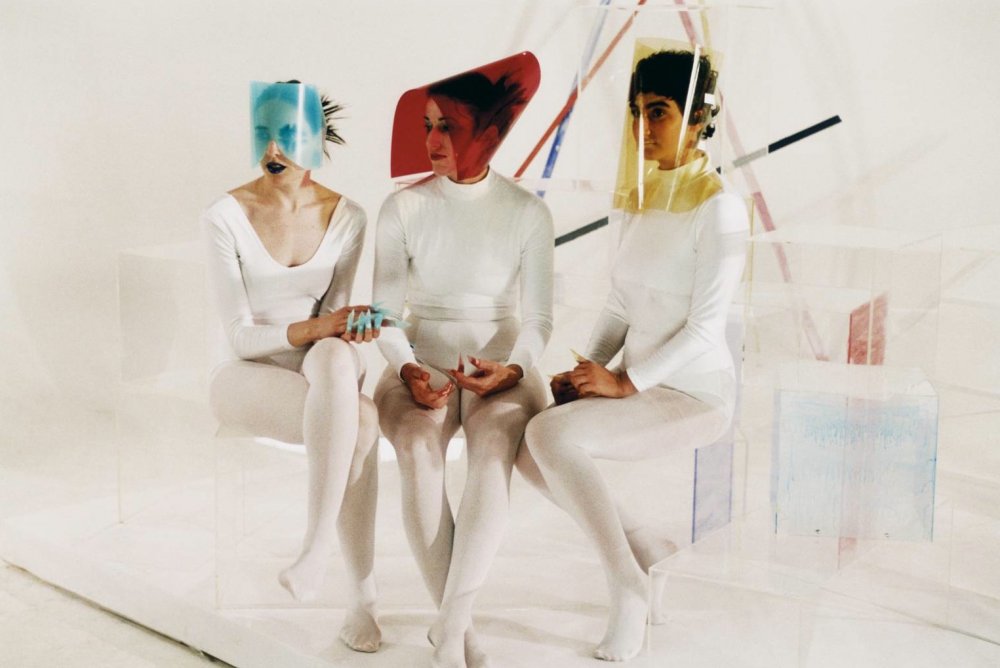 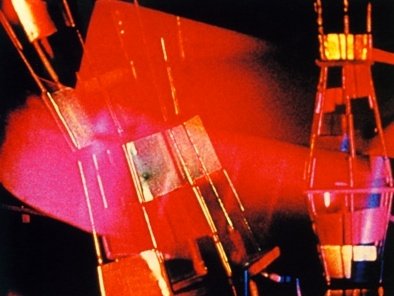 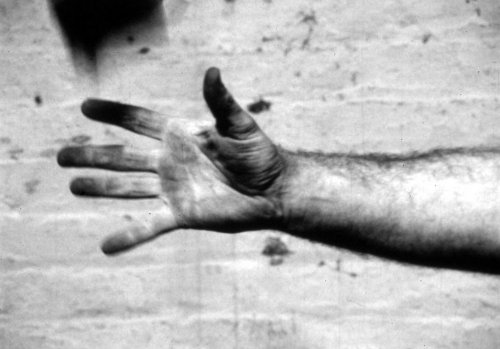 Outside Britain and a decade before Ashton’s film, Maya Deren had experimented with Marcel Duchamp’s string sculpture and symbols of witchcraft with her enigmatic Witch’s Cradle (1943). Two years later in 1945, Marie Menken filmed Visual Variations on Noguchi, a mesmerising response to the sculptor’s work using powerful sound and abstract images, after Isamu Noguchi had asked her to attend his New York studio in his absence. A number of films with an emphasis on sculptural form followed, including Hy Hirsh’s detailed Gyromorphosis (1954) about the kinetic qualities of the work of Dutch sculptor Constant Nieuwenhuys; Richard Serra’s Hand Catching Lead (1968) about the sculptor’s relationship with his materials; Liliane Lijn’s What Is the Sound of One Hand Clapping (1973) about dematerialising volume; Hannah Wilke’s Through the Large Glass (1974), filmed at the Philadelphia Museum of Modern Art and which challenges the authority of sculpture within the museum; William Raban’s Waterfall (1983), experimenting with Ron Haselden’s sculptural installation Graving Dock at the Acme Gallery; and the fantastical Birds (2001), by Daria Martin, about material transformation and its failure.

All of these films screened as part of the LUX international touring programme Describing Form: Film Experiments with the Sculptural Form, which launched at the Henry Moore Institute and Tate Britain early in 2005. 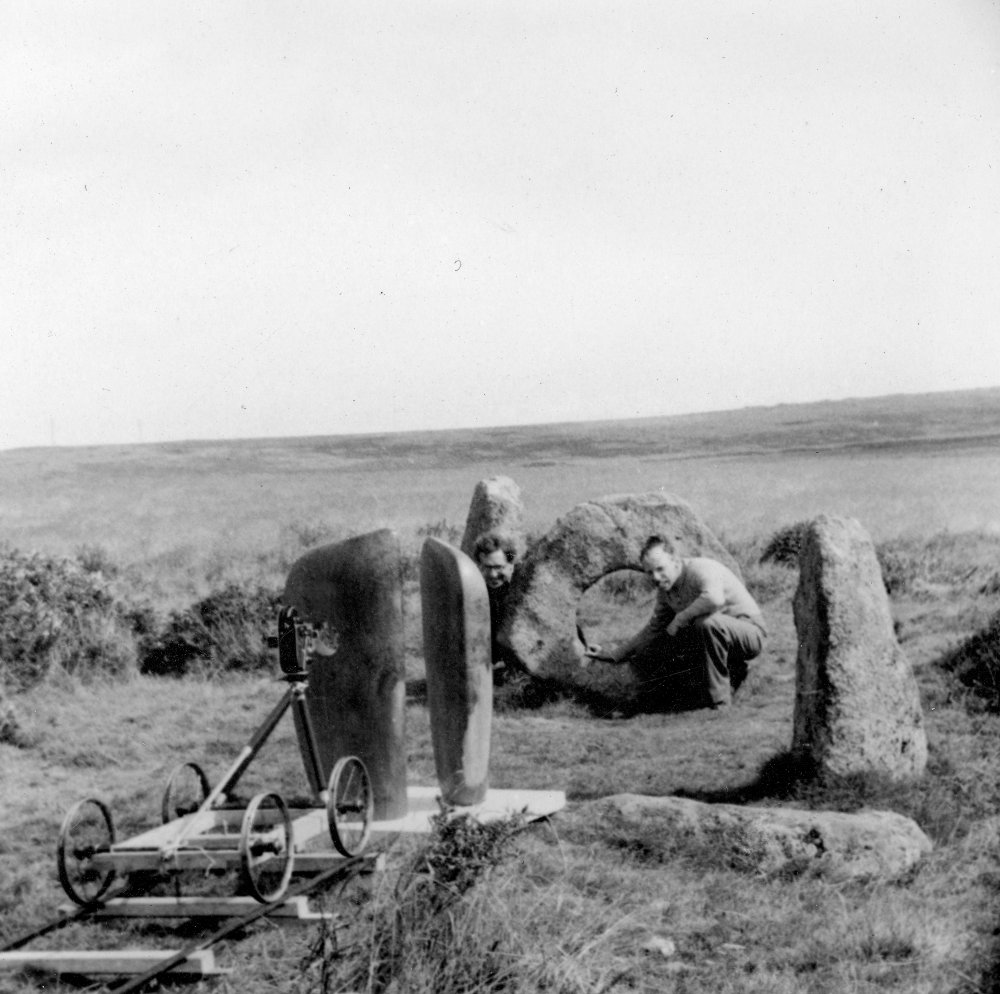 Hepworth’s Forms in Echelon 1938 at the Men-an-Tol Cornwall during filming of Figures in a Landscape (1953)
Credit: © Tate

Based on the fundamental drive of their work to create something new, artists are usually at the cutting edge of innovation and technology. Yet, as Hepworth was receiving broad public interest from the 1950s onwards – Lauren Bacall bought a cast of a polished bronze Two Forms (Domino) in 1970 – her involvement with filmmakers and photographers provided her with the possibilities to distribute her large-scaled work (for presentation purposes) far more easily.

In 1968 Beresford filmed Hepworth during her retrospective at the Tate Gallery in the same year (3 April-19 May). Barbara Hepworth at the Tate was one of a number of films commissioned by the BFI Production Board and Arts Council in the late 1960s and early 70s that documented large public exhibitions. The audio commentary is provided by Hepworth herself and touches on her unique vision for humanity and the properties of her materials. Beresford’s film was chosen by British director John Akomfrah for his curatorial take on Britain at the Hayward Gallery’s recent exhibition History Is Now, in the run-up to the 2015 general election. To Akomfrah, Hepworth’s detailed commentary is remarkable because, as he explains, “one of the conceits of modernism is that works didn’t require explanation.” 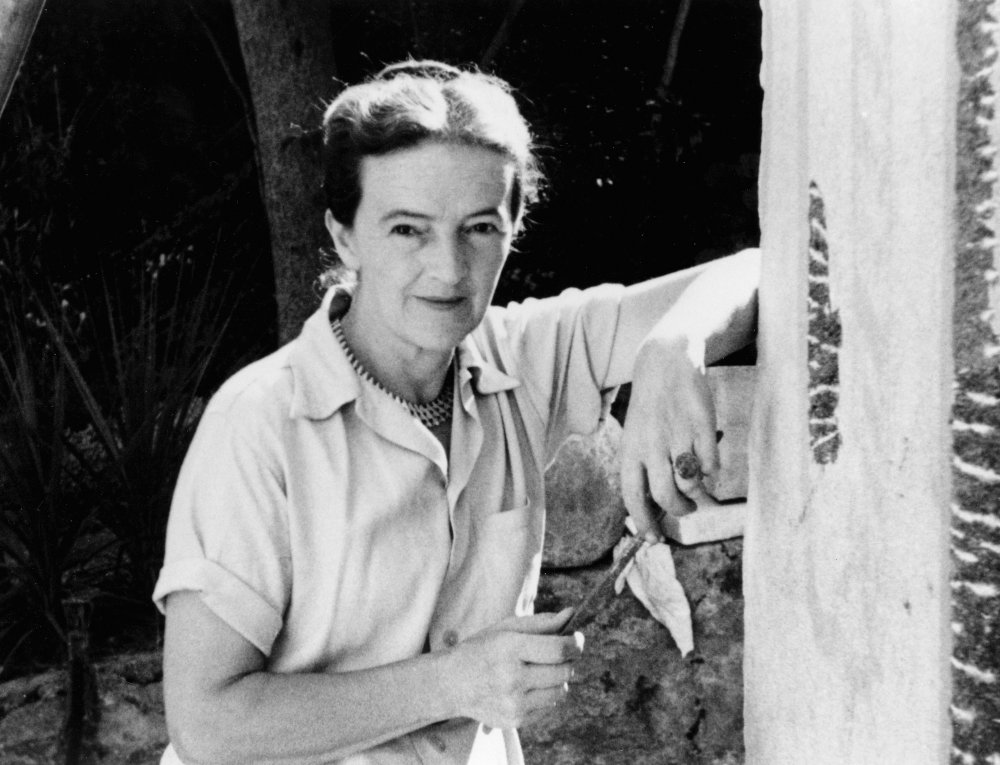 Her collaborations with filmmakers introduced new practices between art and film, while also shedding light on Hepworth’s working methods and character as a filmmaker’s subject. With Figures in a Landscape, Ashton exploited form, landscape and light to frame sophisticated dolly shots in the postwar British countryside. In 1970 artist-filmmaker Gregory Markopoulos would direct Hepworth as a public figure for Moment, an experimental short film depicting the sculptor in multiple superimpositions, edited live at the moment of filming, as part of his series based on important art world figures, including Jonas Mekas, Jasper Johns, Susan Sontag and Allen Ginsberg.

It turns out Hepworth believed that both photography and film complicated the presentation of her work. Towards her later years she developed a strong belief that our appreciation of her work was a direct response to our balance in the natural environment. Thus, in order to understand her sculptures we need to move around them. However, the documentation of many of her artworks through photography and film during her most productive years suggests how interested Hepworth was in probing the boundaries between art and media.

Watch an extract from Figures in a Landscape (1953)