Doctor who? Peter Cushing’s Dr Who and the Daleks turns 50

Peter Cushing’s big-screen turns as the Time Lord are often forgotten in the Doctor Who pantheon, but there’s nostalgic pleasure aplenty in Dr Who and the Daleks, which came out in cinemas 50 years ago. 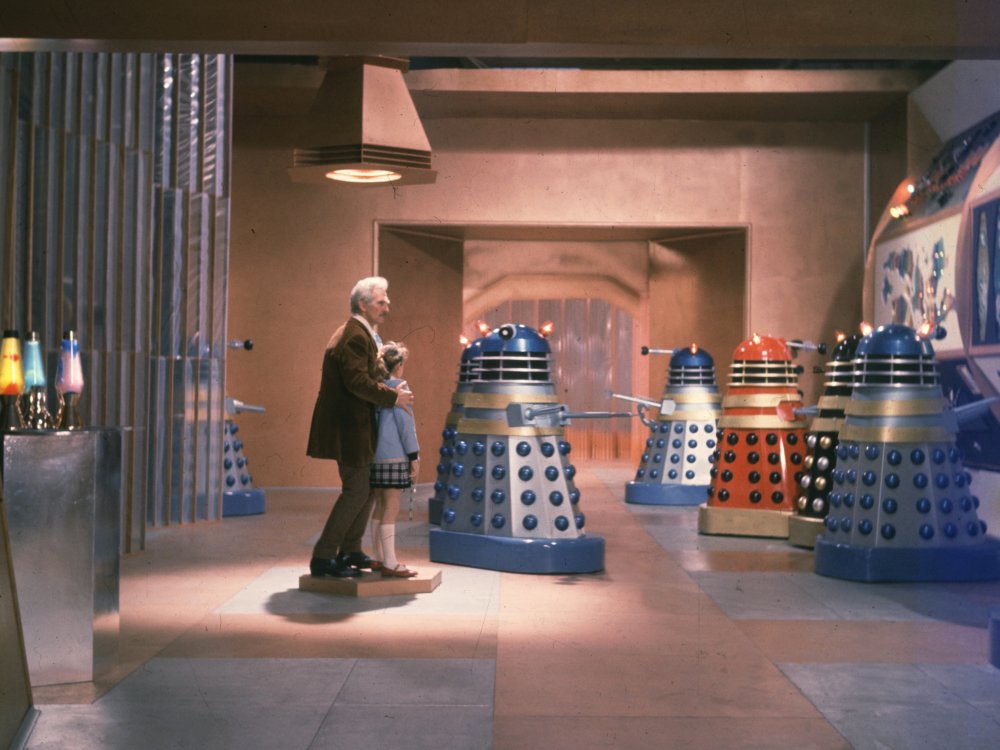 Season nine of the new Doctor Who premieres on 19 September, with Peter Capaldi as the 12th regeneration of the Time Lord, and Jenna Coleman as Clara Oswald, the latest in a long line of intelligent, feisty female assistants.

The series, which first debuted in November 1963, has become so successful and long-running that viewers are now used to the frequent self-references about the Doctor’s past lives and exploits. But one version of the character remains absent from the official Doctor Who pantheon: that played by Peter Cushing in Dr. Who and the Daleks, released 50 years ago on 23 August 1965.

Widely derided by many fans and critics, Dr. Who and the Daleks was made by Amicus, a British production company best remembered for its low-to-medium budget horror films in the late 60s and early 70s. According to Dalekmania, a 1995 straight-to-video documentary, Amicus’s founders, American-born Milton Subotsky and Max Rosenberg, hatched a plan to cash in on the massive success of the Daleks with a big-screen version and steal a march on their major competitor, Hammer Films. They bought the option to remake ‘The Daleks’, the second series of the television show, and two sequels from Terry Nation and the BBC for £500.

Subotsky and Rosenberg were particularly keen to break the character into the US market. Gordon Flemyng, who until then had only worked in television, was hired to direct and Cushing, who had some transatlantic appeal due to his various Hammer films, was cast in the title role. 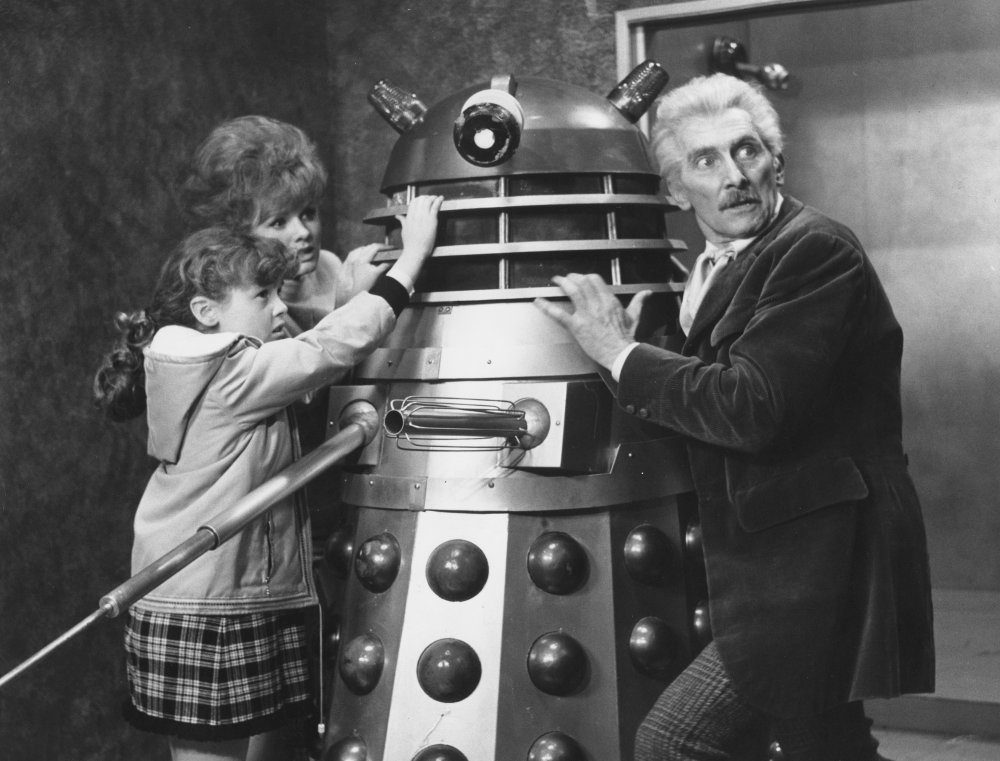 Amicus raised £180,000 to make a bigger, flashier version of the television series. Just how different the movie is in style and tone is signalled by the colourful opening credits and jazzy theme music. The story moves quickly. A mere six minutes elapse before the characters arrive on the Dalek planet, Skaro.

The film did well in the UK, becoming the 20th biggest box office earner of 1965, but enjoyed only moderate US returns. Nonetheless, the UK success was enough for Amicus to immediately commission a sequel with Cushing, Daleks – Invasion Earth: 2150 A.D, which appeared in 1966. An even more lavish effort, co-financed through a product tie-in with a breakfast cereal company, it didn’t do as well as the first and plans for a third never eventuated. 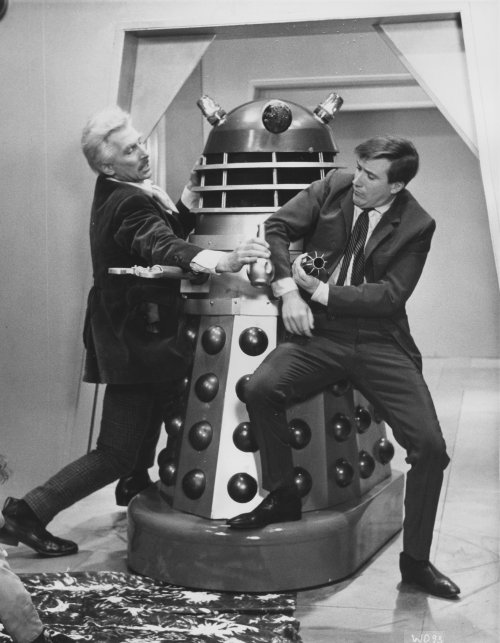 Plot-wise, Dr. Who and the Daleks broadly adheres to the television series. The Doctor and his granddaughters, modish Barbara (Jennie Linden) and young, precocious Susan (Roberta Tovey), along with Barbara’s boyfriend, Ian (singer and comedian Roy Castle) accidently travel in the Tardis to Skaro and are soon embroiled in a struggle between the warlike Daleks and the peace-loving Thals.

It’s certainly an uneven affair. Some scenes, such as Susan’s first encounter with the Thal leader, Alydon (Barrie Ingham), still have the capacity to thrill. Others, like the final victory over the Daleks, feel rushed and flat. The Doctor’s granddaughters are largely one-dimensional, with Castle along to add comic relief trying to figure out Dalek technology.

The aspect of the movie that most antagonises purists is Cushing’s Doctor. A mere human scientist, Cushing is the opposite of the spiky curmudgeon portrayed by William Hartnell. But his mild-mannered exterior displays flashes of intensity, especially during his attempts to rouse the Thals’ fighting spirit by pretending to offer Alydon’s female companion as a sacrifice to the Daleks. According to Ingham on Dalekmania, the scene earned a rebuke by the Communist Party’s Daily Worker for its implied militarism.

The highlight of the movie is its look. While the television series remained in black and white until 1969, Dr. Who and the Daleks was made in widescreen format and Technicolor, and everything is drenched in lurid greens and blues. The palette, along with the soundtrack and the constant array of sound effects, is key to establishing the film’s wonderfully pulpy sci-fi atmosphere.

Many of the sets, including the petrified forest in which the Tardis first lands and the mountain protecting the rear of the Dalek city, are impressive. Others are more basic but still work: streamers, multi-coloured cellophane, even lava lamps comprise the décor in the Dalek city. With their wigs and makeup, the Thals come across as androgynous and glam. According to Dalekmania, the burly specimens among them were recruited from porters in Covent Garden Market and demanded extra payment to have their arms and chests shaved. 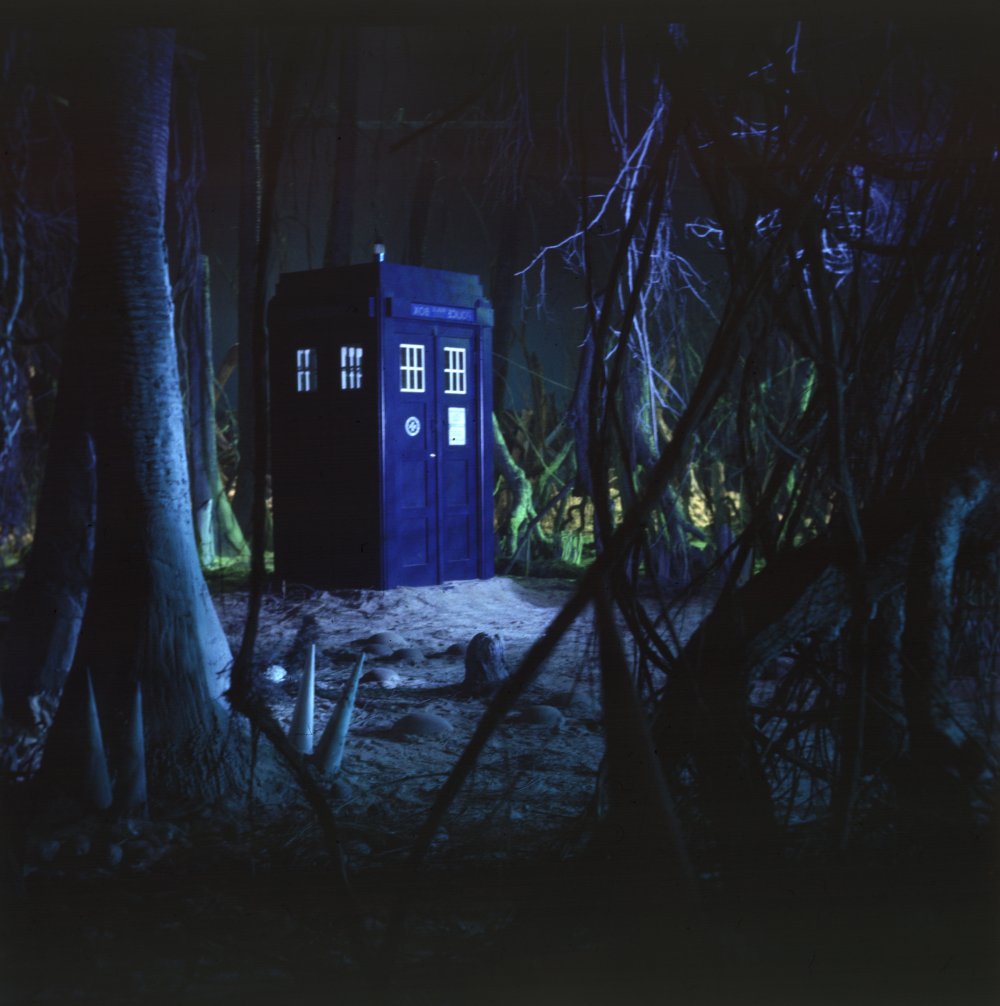 Another plus is the Daleks. Although they shoot steam not lasers as in the television show (small flamethrowers were originally mooted but ruled out as too dangerous and frightening for the target family demographic), the movie Daleks are more impressive than their small screen counterparts. Amicus redesigned them to look taller, more imposing and more colourful, with menacing mechanical claws instead of plungers.

They were extensively used in publicity. Several were dispatched to the Cannes Film Festival and others reportedly went as far afield as Sydney, Australia. Some were mislaid and never returned.

Related to Doctor who? Peter Cushing’s Dr Who and the Daleks turns 50