Did Stanley Kubrick invent the iPad?

Read the futuristic headlines for a New York Times app that Kubrick commissioned for the ‘Newspad’ in 2001: A Space Odyssey, a slimline computer that eerily predicts the modern tablet. 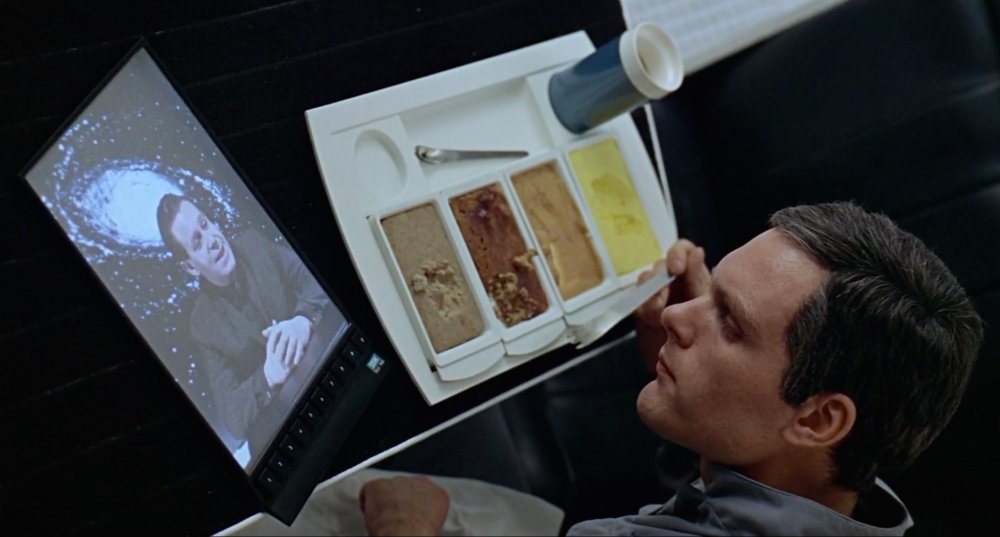 2001: A Space Odyssey (1968)
Credit: With thanks to the SK Film Archives LLC, Warner Bros., the Kubrick family, and University of the Arts London

Kubrick, a two-month exploration of the groundbreaking, boundary-pushing cinema of a directorial genius, runs at BFI Southbank from April-May 2019

In 2011, an unusual piece of evidence was presented in court in a dispute between technology giants Apple and Samsung over the latter’s range of handheld tablets, which Apple claimed infringed upon the patented design and user interface of the iPad.

As part of Samsung’s defence, the company’s lawyers showed the court a still image and clip from Stanley Kubrick’s 2001: A Space Odyssey (1968) showing the astronauts played by Gary Lockwood and Keir Dullea eating while watching a TV show on their own personal, mini-sized, flat-screen computers.

Faced with the potential withdrawal of their Galaxy Tab 10.1 and various smartphones, Samsung questioned the Apple patent’s claims on originality by pointing to the rectangular shape, large display screens and flat surfaces of these mini-computers. The case was made that the ‘Newspad’ in 2001: A Space Odyssey was an example of ‘prior art’, featured in a film released over 40 years before the arrival of the first iPad in 2010.

Known for effecting a quantum leap in both the techniques and ideas of sci-fi cinema, had Kubrick’s masterpiece also foreseen the ubiquitous handheld devices that have so defined our lives today? 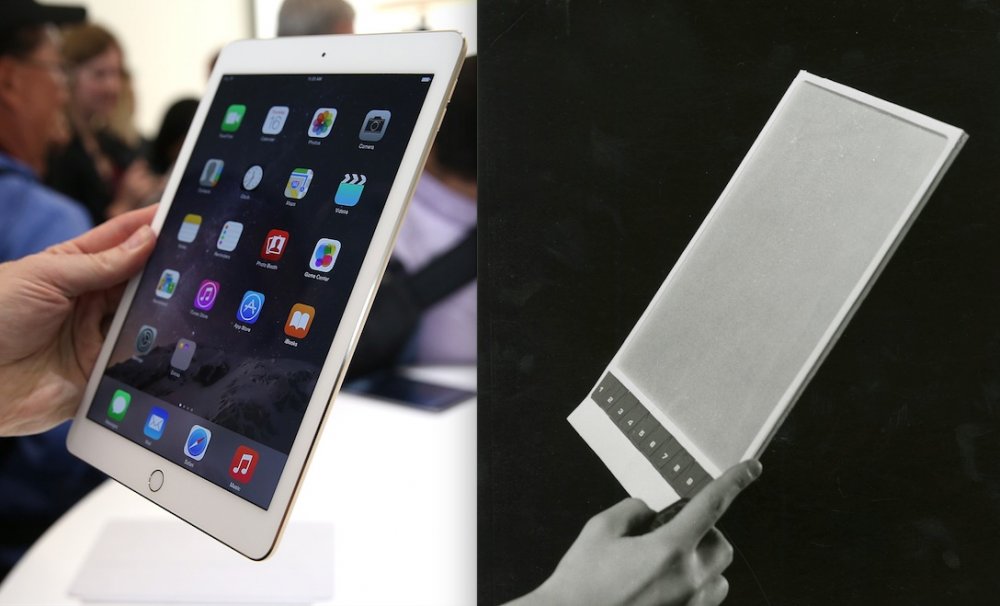 The Apple iPad and an original design for the Newspad in 2001: A Space Odyssey (1968)
Credit: With thanks to the SK Film Archives LLC, Warner Bros., the Kubrick family, and University of the Arts London

There’s certainly something familiar to the modern viewer about the way in which the film depicts Doctors Bowman and Poole entirely engrossed in their tablet screens, only looking away to spoon up another mouthful of space food from their trays.

The devices’ appearance in the film is brief, and we see the astronauts casually using them as personal, flat-screen televisions. There’s no sign of touch-screen technology or explicit suggestion of multiple functionality. However, as rare documents found in the Stanley Kubrick Archive verify, Kubrick’s team had actually envisaged an impressive range of functions for their invention.

Anticipating the digital newspaper and magazine apps of today, the 2001 production team saw the Newspad as featuring instant access to a range of popular periodicals. Long lists of imagined, publication-specific headlines for the year 2001 were conceived, and related news stories and features typed out in full. Kubrick’s team wrote to the publications in question, including the New York Times and Life magazine, seeking their permission to include their brand and the mock editorial on the Newspad.

Dated 15 December 1965, one such letter from Kubrick’s collaborator Roger Caras to Joseph F. Kern, then publisher of Popular Mechanics, explains how the Newspad would work on screen:

In one sequence aboard a spacecraft involved in a deep space probe two of the astronauts use an IBM NEWSPAD. This is a news projecting device enabling space travellers to have access to Earth news via radio projection. It is an item of hardware logically anticipated for a period 36 years from now. We are working with IBM, of course, and using their technical assistance.

In the sequence involved, an astronaut pushes a button which causes an index of 200 leading periodicals to appear on a screen. At various times buttons will be depressed that will cause the individual indices for five of these publications to be projected. The five periodicals selected are Sports Illustrated, Life, Scientific American, Popular Mechanics, and the New York Times.

Later on in the picture the astronaut depresses the button a third time selecting a story from Popular Mechanics to read. We propose to write the story item 12 on the index: LOOK IN YOUR ATTIC: EARLY ELECTRIC-POWERED TOOLS FETCH FORTUNE ON ANTIQUE MARKET.

A fascinating glimpse into how Kubrick’s mid-60s production team envisaged the future, the list of projected headlines for the New York Times in the year 2001 runs to 36 items and includes such news stories as “10000th Baby Born at South Pole City” and “Grand Canyon Bridge Opened by President: Last Link in Argentina-Alaska Electronic Highway System.” 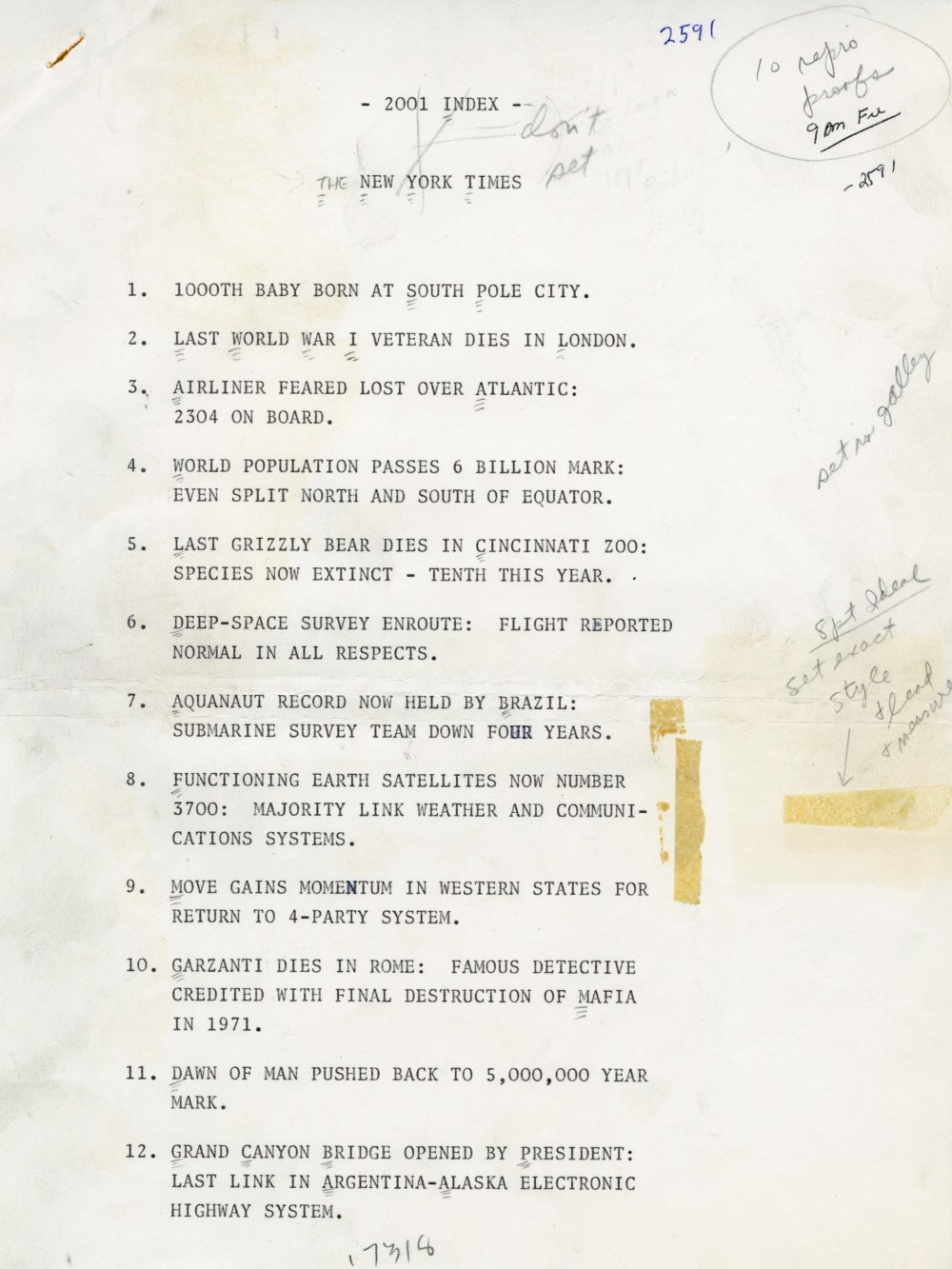 Mock headlines created for a 2001 edition of the New York Times on the Newspad in 2001: A Space Odyssey (1968)
Credit: With thanks to the SK Film Archives LLC, Warner Bros., the Kubrick family, and University of the Arts London 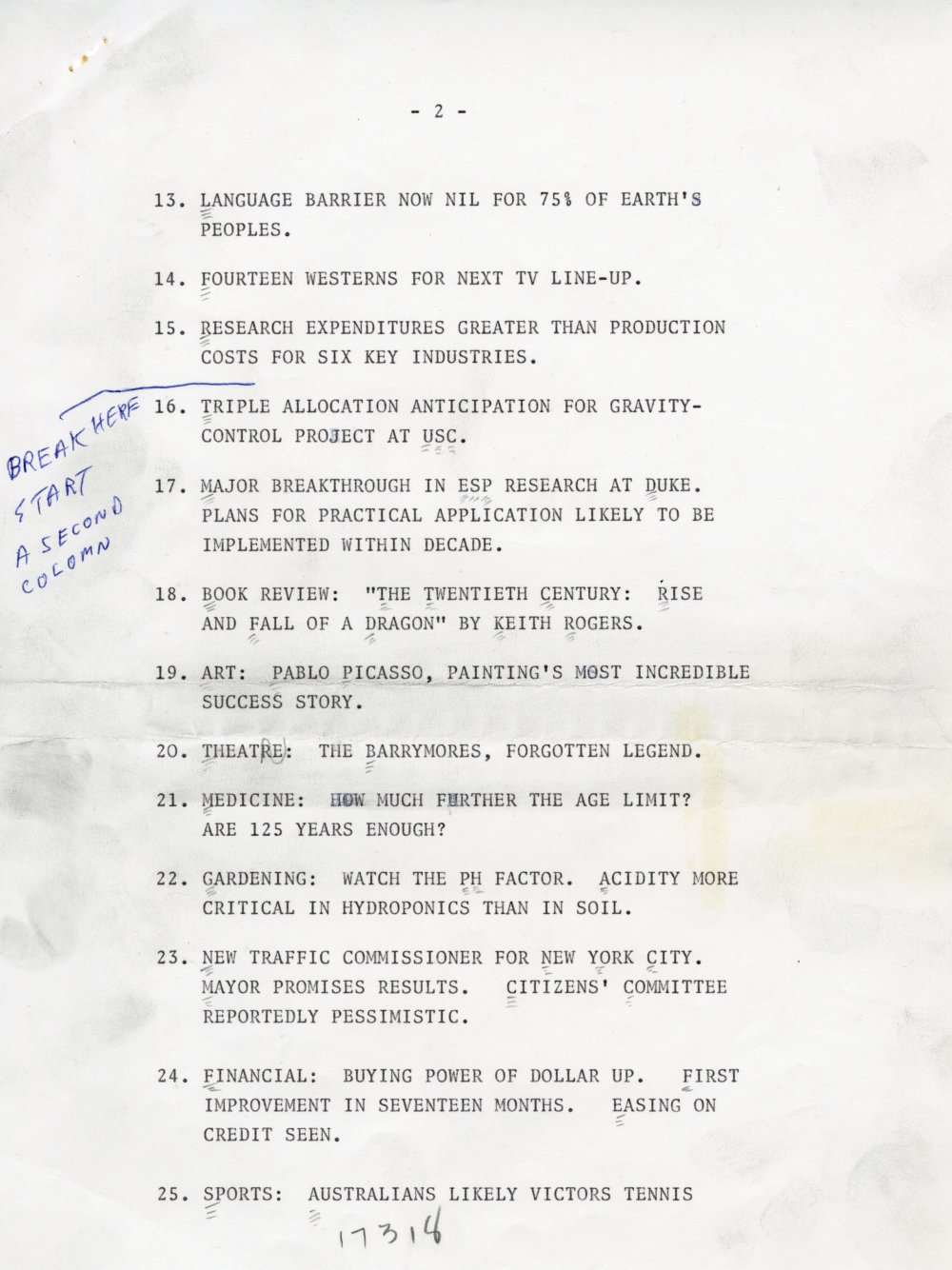 Mock headlines created for a 2001 edition of the New York Times on the Newspad in 2001: A Space Odyssey (1968)
Credit: With thanks to the SK Film Archives LLC, Warner Bros., the Kubrick family, and University of the Arts London

Neither South Pole City nor an Alaska-Argentina highway system exist yet of course, and many other of the fake 2001 headlines can now be seen to be wide of the mark. Airliners can’t yet carry as many people as the Kubrick news stories predicted, and we’re still over a thousand satellites short of the 3,700 that the mock NYT imagined would be orbiting Earth by the turn of the 21st century.

Even a safe-bet 2001 headline such as “Last World War I Veteran Dies in London” has been undermined after the last living vet in fact survived to the impressive age of 110 before dying in 2012.

But it would be churlish to focus on the inaccuracies of these predictions when the Newspad itself, its content and functions, so credibly anticipates the iPad and its ilk.

Though the Newspad evidence was subsequently ruled out by the judge presiding over the Samsung case, as these documents prove, even if the full use of the Newspad was never explored on screen, the thinking behind the gadget plausibly projected how we’d consume news and entertainment in the future. 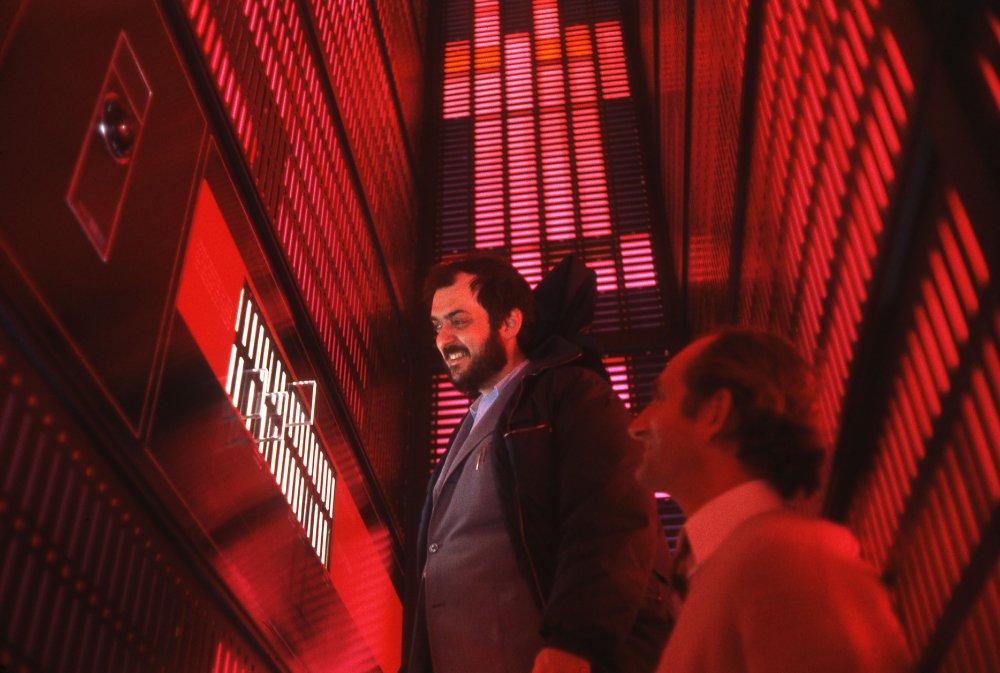 Rare behind-the-scenes shot of Stanley Kubrick during production of 2001: A Space Odyssey (1968)
Credit: With thanks to the SK Film Archives LLC, Warner Bros., the Kubrick family, and University of the Arts London

Lost in the internet

In the novel of 2001: A Space Odyssey that Arthur C. Clarke wrote while collaborating with Kubrick on the film, the writer expands on just how the gadget and its stream of news formed a habit of one of its astronaut protagonists:

Floyd sometimes wondered if the Newspad, and the fantastic technology behind it, was the last word in man’s quest for perfect communications. Here he was, far out in space, speeding away from Earth at thousands of miles an hour, yet in a few milliseconds he could see the headlines of any newspaper he pleased. (That very word “newspaper,” of course, was an anachronistic hangover into the age of electronics.) The text was updated automatically on every hour; even if one read only the English versions, one could spend an entire lifetime doing nothing but absorbing the ever-changing flow of information from the news satellites.

Thanks to something called the internet, which neither Kubrick nor Clarke predicted, we can be grateful for news that updates more frequently than on the hour. But the idea of spending “an entire lifetime doing nothing but absorbing an ever-changing flow of information” is something with which anyone reading this article or anything else from the internet’s constant flow of distractions can forlornly sympathise.