The world of 1940s design in Olivier’s Shakespeare films

Beautiful production designs and costumes for Laurence Olivier’s masterful adaptations of Henry V and Hamlet, which are on display as part of a new exhibition dedicated to Shakespeare on film. 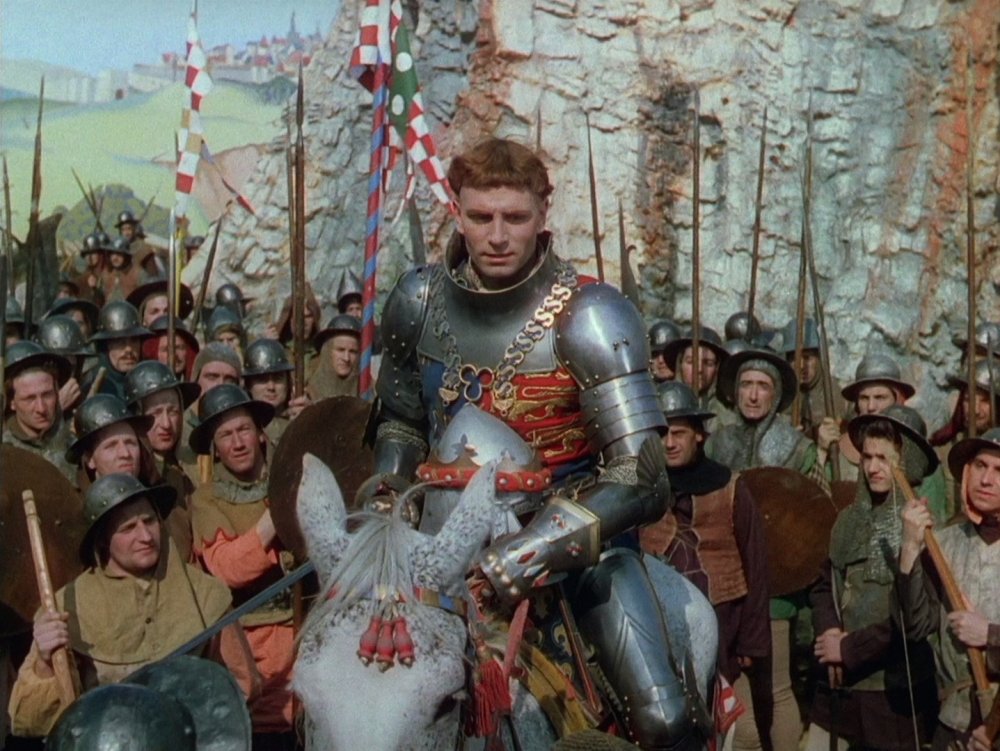 On 23 April 2016, it will be 400 years since the death of the world’s greatest playwright, William Shakespeare. His work has held audiences spellbound for centuries and has created important roles for generations of legendary actors. Originally created for live performance, Shakespeare’s plays have inspired new and often stunningly imaginative screen interpretations. These have presented spectacular versions of Shakespeare’s own worlds, but have also found ways to re-imagine, re-interpret and re-inflect his plays, to explore contemporary themes and concerns, and to introduce new audiences to his work.

Our spring exhibition at BFI Southbank looks at just a handful of the many productions and people who have helped to re-imagine Shakespeare for the screen. While Shakespeare has become a truly international phenomenon, who has inspired great works of cinema from all across the globe, our exhibition hones in on a small number of British interpretations, including a section dedicated to the two landmark productions by Laurence Olivier: Henry V (1944) and Hamlet (1948). 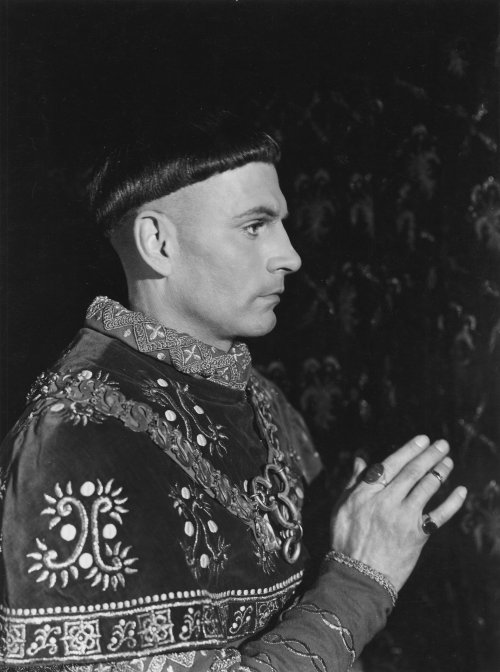 Olivier has been credited as one of cinema’s first great Shakespearean artists. Although by no means the first to adapt Shakespeare for film (see for instance the wealth of films included in Play On! Shakespeare in Silent Film), as an actor and director Olivier achieved unprecedented international success taking Shakespeare from the stage to the screen.

Britain was at war when Olivier directed and starred in Henry V. In the spirit of Shakespeare’s play, the film uses history as lens through which to refract contemporary political concerns. The film was heralded as a landmark in the cinematic interpretation of Shakespeare’s work, while also being a key piece of wartime propaganda.

It was at the request of the Ministry of Information that Olivier left his station in the Fleet Air Arm to direct Henry V. Filmed throughout 1943 and 1944, by the time of its release in the wake of D-Day few could have missed the relevance of Henry’s rallying speech: “Once more unto the breach, dear friends”. The presentation of a small army overcoming their continental adversaries would no doubt have struck a chord for anyone following the progress of the Normandy landings. And the opening aerial shot, sweeping over a model of Elizabethan London, was preceded by a dedication: “To the Commandos and Airborne Troops of Great Britain – the spirit of whose ancestors it has humbly been attempted to recapture in some ensuing scenes”. This would have been a stirring sight for survivors of the Blitz.

Olivier’s adaptation foregrounded the young king’s heroism and was rooted in his powerful and charismatic central performance. He received a special Oscar that year for ‘outstanding achievement as actor, producer and director’. Olivier cut Shakespeare’s text to remove some of the darker undertones of the play, which Kenneth Branagh’s later Henry V (1989) restored. 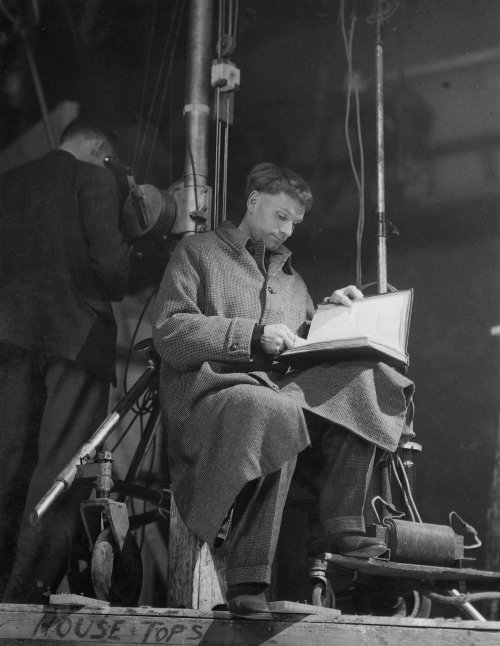 One of the most celebrated aspects of Henry V is its bold design scheme created by Roger Furse, Carmen Dillon and Paul Sheriff. All were previous collaborators with Olivier: Furse on theatrical productions of Shakespeare at the Old Vic, and Sheriff and Dillon on The Demi-Paradise (1943). Furse (1903-72) was responsible for the costumes. Shot in brilliant Technicolor, the vibrancy of Henry V owes much to his majestic sense of pageantry.

The film was a visual feast for those still reeling from the impact of clothes rationing in the Second World War. “It shines like a jewel”, exclaimed the Bristol Evening News, while the Birmingham Mail remarked that the magnificence of the costumes would be “simply staggering” to anyone “who knows how many clothing coupons make five”.

The art director, Sheriff, was born in Moscow in 1915 as Count Paul Shouvaloff and came to Britain as a political refugee when his connections to the tsar put his family in jeopardy. Working as a mining engineer before training as an architect, he initially served as a translator to Russian designers working in the British studio system until wartime call-ups left a shortage of art directors.

Sheriff’s close collaborator was Carmen Dillon, who described herself as Britain’s “only woman art director”. Although this wasn’t entirely true, few enjoyed the longevity and prominence of Dillon within the film industry, and she made great inroads for women working in a male-dominated sector. She was also one of the first to be formally credited as ‘art director’. Training as an architect with the Architectural Association (alongside another great of British art direction, L. P. Williams), Dillon started her career designing ‘quota quickies’ for Fox during the 1930s, before making her way to Rank.

Sheriff and Dillon went on to work together for many years, frequently describing their relationship as a professional marriage. Although Sheriff took the senior credit on most of the productions, their work was balanced and mutually respectful, with Dillon, a creative problem-solver, often taking the lead on built structures.

Henry V moves between three stylistic models. Opening in Elizabethan London with a realistic but obviously staged rendering of the Globe Theatre (a play within a play), it then moves between the furore of the battlefield, shot on location in Ireland, and an anti-realist design aesthetic. This latter was inspired by medieval illuminated manuscripts and plays with flattened perspectives and stylised backdrops. 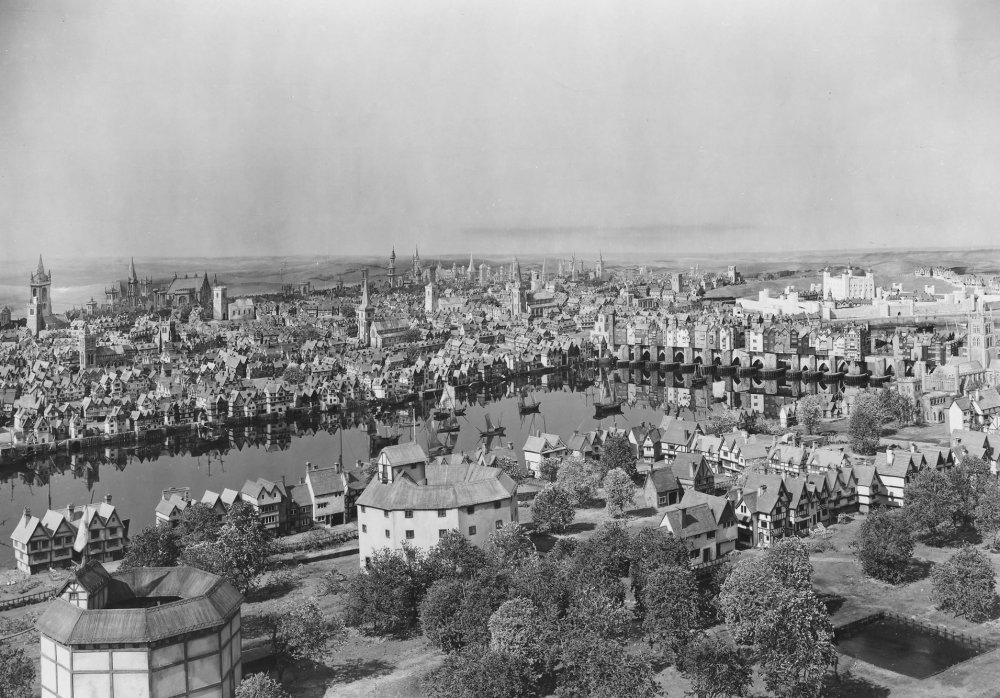 The film’s model work is particularly impressive. It opens with an aerial shot which sweeps over a model of Elizabethan London, including the Globe Theatre nestled on the banks of the Thames. Based on J.C. Visscher’s early 17th-century London map, the model measured an impressive 50 feet by 70 feet and took more than two months to make.

Following the exuberance of Henry V, Olivier’s next meeting with Shakespeare was a much darker affair. Hamlet was shot in deep-focus black and white, and concentrated on the psychological dramas being played out. It became the first British film to win the Academy Award for best picture. 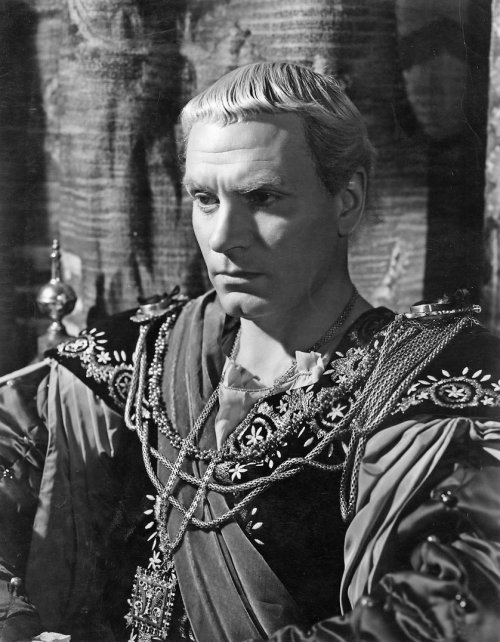 Olivier’s brief to his design team was that the film should have the quality of an engraving, which seems to have influenced early concept sketches by Roger Furse. With most of the action focused on Elsinore Castle, Furse produced a series of drawings to guide the director through his ideas on architecture, shape and atmosphere. These were then handed to his trusted art director, Carmen Dillon, to realise. 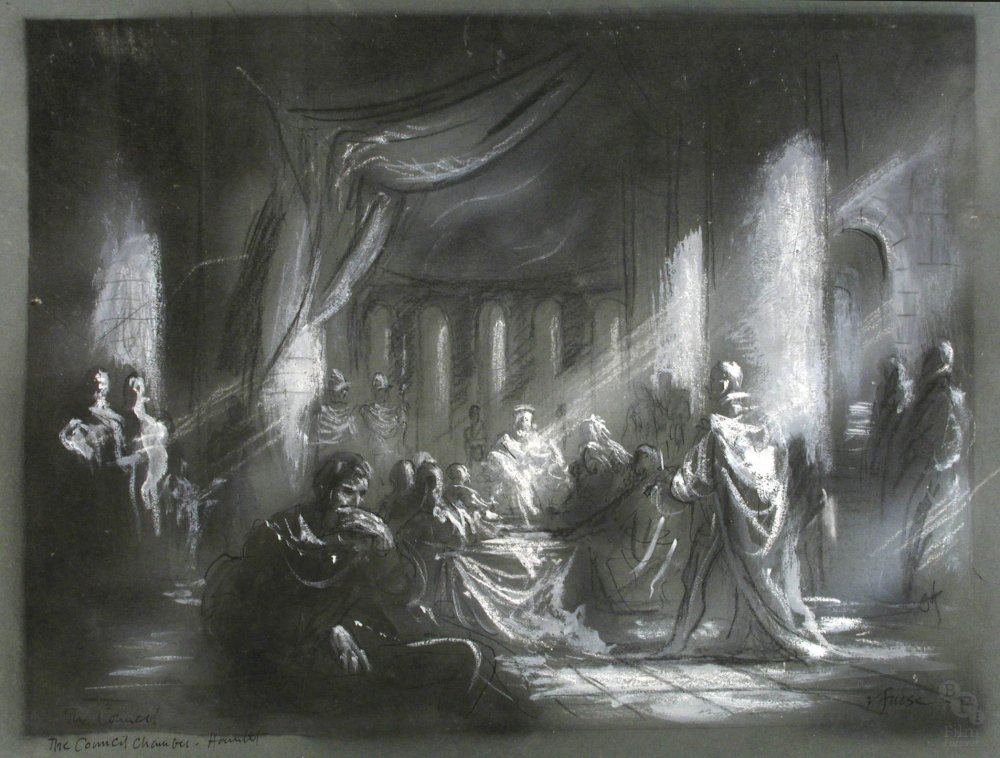 Furse believed that the sets should be spacious – almost austere – and props used only when the action demanded them. The sets for Hamlet were based on the Romanesque style of architecture with its rounded arches and soaring columns. Furse was particularly attentive to the needs of lighting and photography, and his drawings are often studies in light and shape that anticipate the overall look of the finished shot. 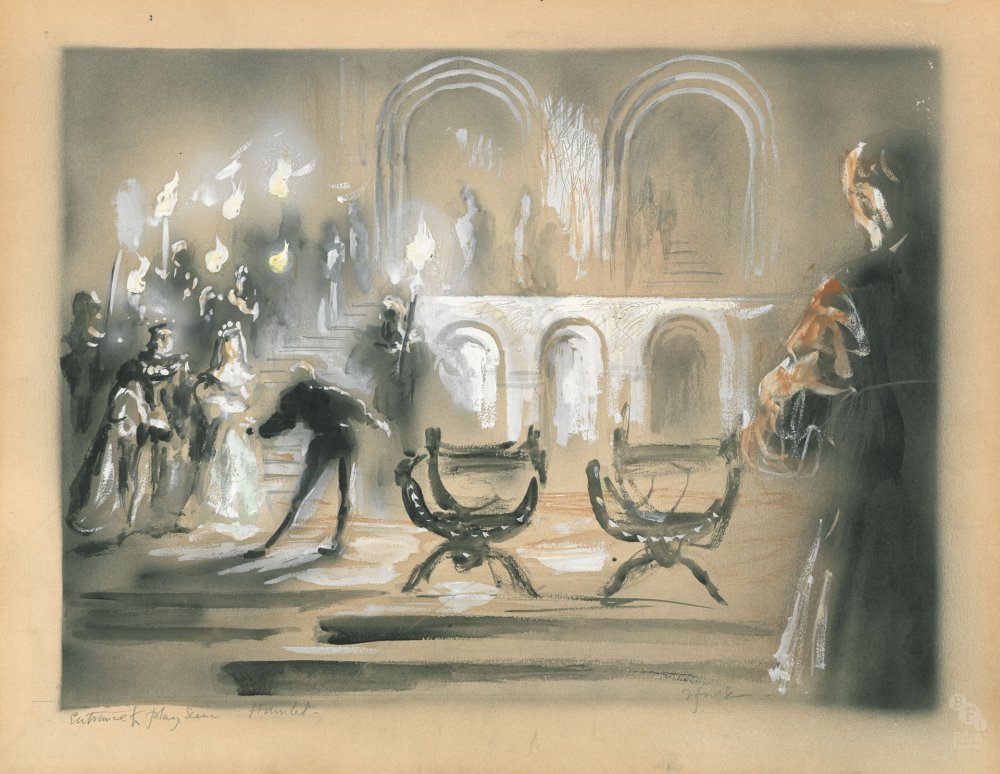 1948 was the first year in which costume design was introduced as a category at the Oscars, and Roger Furse became the first ever recipient of the award. As many costumes were returned to the costumiers to be remade and reworked for other productions – particularly in the wake of clothes rationing – the costume below is a rare surviving example attributable to Hamlet. 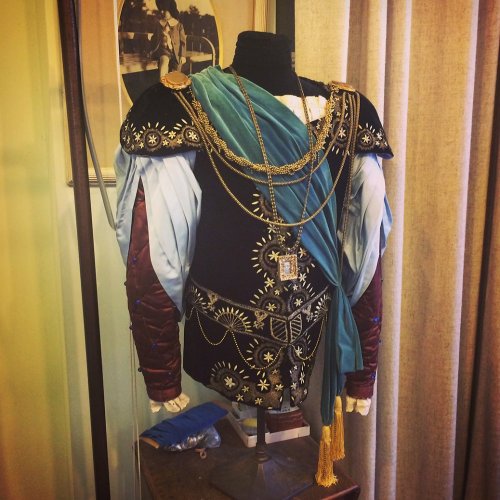 Hamlet shirt and doublet
Credit: On loan from Robert Worley/Photograph by Nathalie Morris

It references longstanding theatrical archetypes, with a black doublet complimented by heavy jewellery. As typical of designer Furse, there are also flourishes of colour and embellishment. Although photographed in black and white, the different tones and textures would have helped to refract or absorb light, adding drama to the finished shot. Colour in costume was also a crucial way of supporting an actor’s performance. 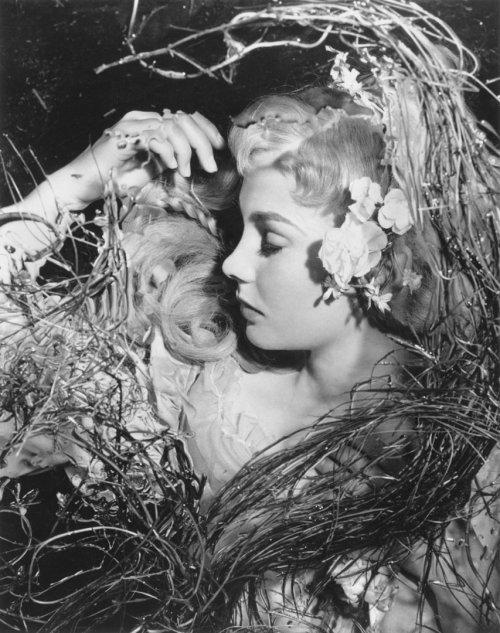 Following her celebrated performance as Estella in David Lean’s Great Expectations (1946), 18-year-old Jean Simmons took the role of Ophelia. Emphasising the youthful fragility of the character, this portrait nods to celebrated artistic representations – particularly Millais’ Pre-Raphaelite interpretation – as well as the photographic memento mori. Driven out of her mind, Ophelia is presented here in a moment of perfect stillness. The image was used to striking effect on the cover of the popular magazine Picture Post, 11 October 1947. 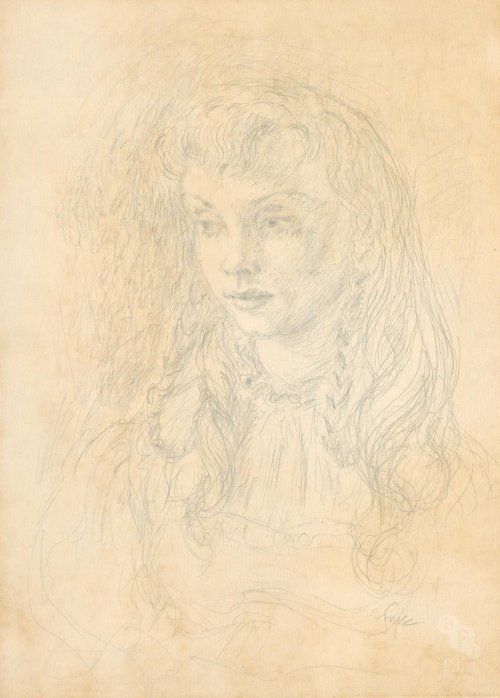 Study of Jean Simmons as Ophelia by Roger Furse
Credit: Gifted to the BFI National Archive by Tracy Granger

This pencil drawing of Simmons as Ophelia was made by Hamlet’s designer Roger Furse. It was shown as part of a selling exhibition at the Leicester Galleries in 1948 and was purchased by Simmons’ then-husband, the actor Stewart Granger.

Furse’s sketches capture the emotional tone of the production. Art director Carmen Dillon then had to organise a team of more than 100 stagehands to turn the concept drawings into reality. For the sequence where Ophelia takes her own life, Furse and Dillon concealed the camera track within weeds and rushes, with Simmons having to bear endless retakes in freezing water as she was towed along on an underwater trolley. In the below image, Furse is shown supporting Simmons as she has her makeup retouched between takes. 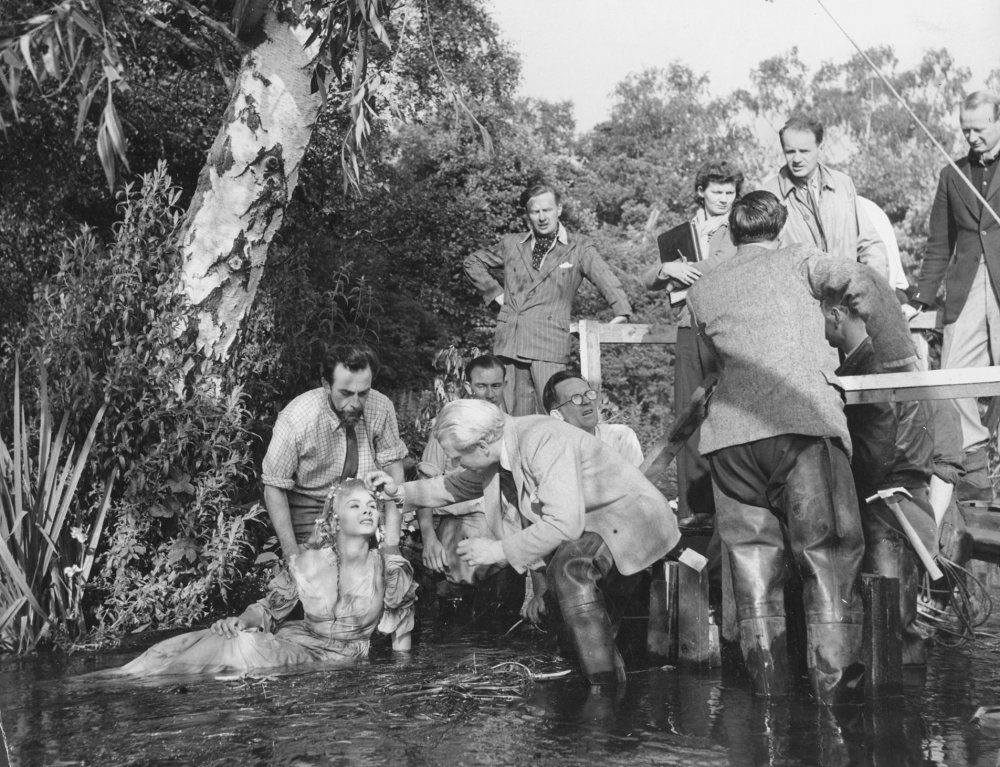 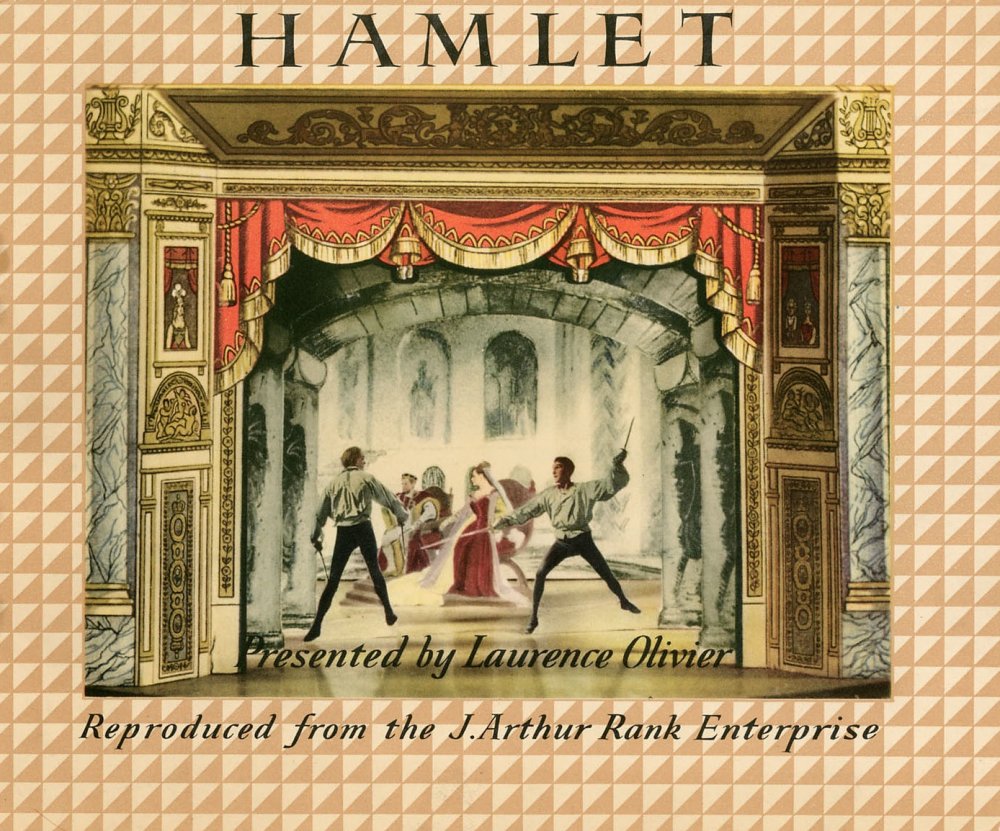 This charming brochure for Hamlet was produced in collaboration with London toy makers Pollock’s and includes sets specially designed by Furse. It encourages audiences to see Hamlet as part of a rich theatrical tradition. For those with enough patience – and a very small pair of scissors – the brochure includes figures and backdrops that can be used to recreate two scenes. The brochure also offers instruction on making a simple structure from cornflake packets to support the backdrops.

Pollock’s have been producing beautiful toy theatres since the mid-19th century, and are famed for their postwar Regency revival theatres. The theatre we have on display is a later model, but includes the original backdrops and cut out figures. These evocative wooden theatres helped to inspire a generation of actors and performers, including Sir Ian McKellen, who received a Pollock’s Hamlet theatre for his ninth birthday. 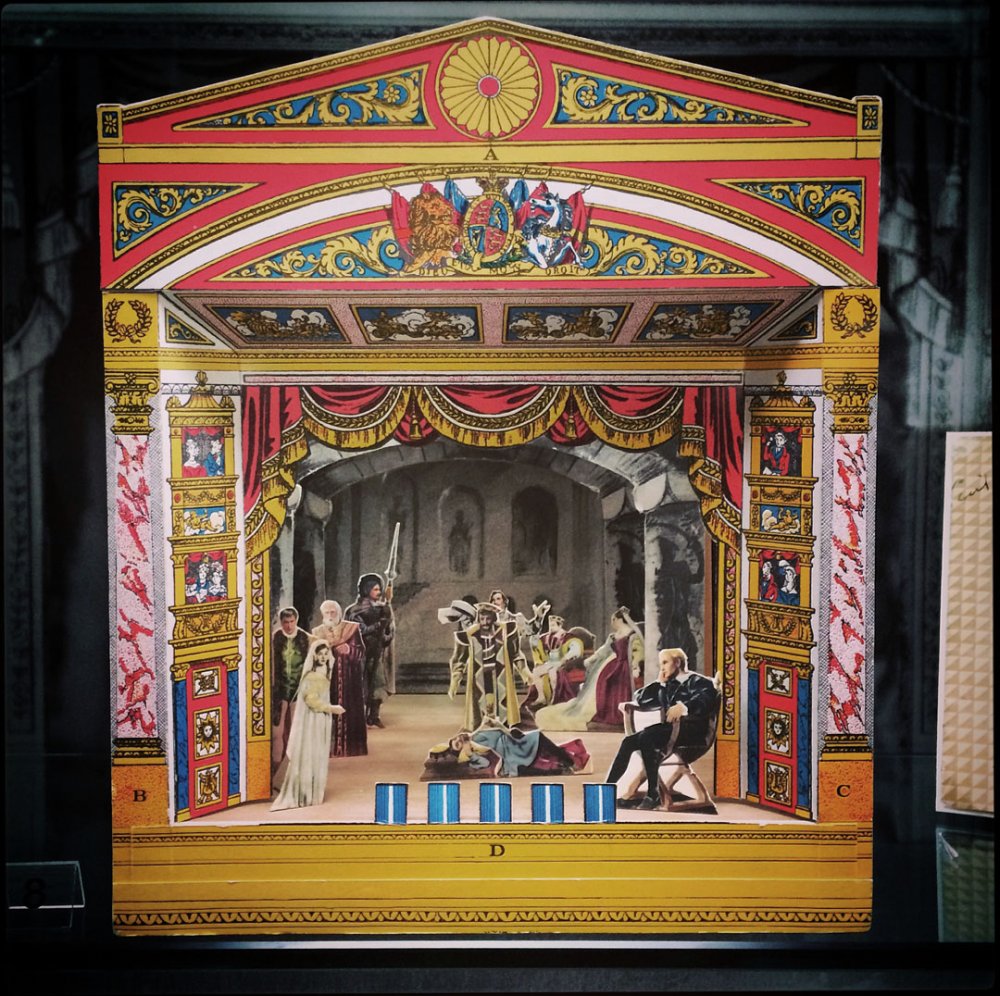 Pollock’s toy theatre with backdrops and figures for staging Hamlet
Credit: On loan from Robert Worley/Photograph by Nathalie Morris