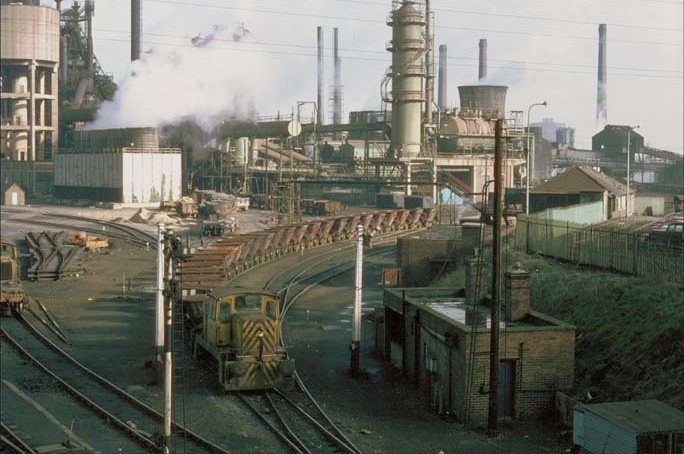 The story of Corby is one of steel. The fortunes of the East Northamptonshire town were intrinsically tied to those of the steel industry for much of the 20th century: booming in the postwar years before succumbing to the aftermath of the 1970s recession. Corby is a place of constant reinvention, adaptation and modernisation, and the raw materials of its history can be extracted from the holdings of the BFI National Archive and regional collections.

Situated on a bed of ironstone, the village of ‘Corbei’ is noted in the Domesday book as an ironworks site from sometime before 1066, but archaeological evidence in the area suggests that iron ore extraction dates from the Roman period. This extract from Iron Ore in Britain (1956), sponsored by steel tube manufacturers Stewart & Lloyds, touches on the background to the town’s iron-based heritage.

Lloyd and Lloyds Ltd began extracting iron ore on an industrial scale in 1881 and, after merging with the Scottish A.& J. Stewarts and Menzies company to become Stewarts & Lloyds Ltd in 1903, it opened its blast furnace ironworks in Corby in 1910. In 1932 the site was chosen for expansion and a new steelworks, rolling mill and tube-making plant was added to the ironworks. The population grew by nearly 10,000 over eight years and in 1939 the village became a town.

The steelworks thrived into the second world war. One of Corby’s greatest contributions to the war effort was the manufacture of 1,000 miles of tubing for the PLUTO project (Pipeline Under the Ocean): a single pipeline stretching between Isle of Wight and Cherbourg to provide fuel for the allied forces. The Corby and Tollcross tubing was coiled onto a massive cone-ended drum (or ‘conundrum’) and eventually laid in a single night. 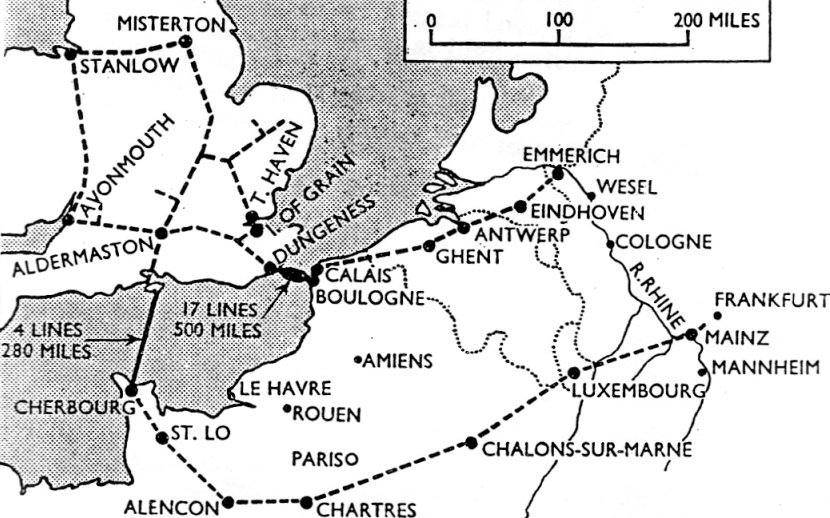 The map shows the network of land-based pipelines connected by the PLUTO project, with its underseas tubing (much of it forged by Corby's Stewarts & Lloyds) running from the Isle of Wight to Cherbourg and from Dungeness to Calais.

The company’s stunning achievements continued into the postwar years. Faced with the problem of producing enough iron ore to meet demand, Stewarts & Lloyds commissioned the ‘Great Jib’, which, at the time of its completion in 1951, was the world’s largest walking dragline excavator. The following excerpts are from a Stewart & Lloyds promo, showing the ‘before’ and ‘after’ of solving the problem of efficiently mining for iron ore. What’s fascinating about the solution – the building of a massive excavator – is that it shows the ambition and engineering capability at Corby. They have a problem, so we’ll build the solution.

The steelworks were in their industrial prime and the town reaped the benefits. By 1950 the population had grown to 18,000 and Corby was designated a ‘New Town’. Extensive building continued and another wave of migration injected new blood into the prosperous town.

Many workers came from western Scotland and the town became a ‘Little Scotland’ in the Midlands, boasting its own Rangers and Celtic fan clubs, a Robert Burns appreciation society, several churches of Scottish dominion, bus routes to the Grampians and a Highland Games that continues to this day. Several 1960s documentaries, including Philip Donnellan’s excellent Men of Corby (1961), captured the town in its prosperous golden era.

The growth and accompanying modernity and cosmopolitanism that Corby enjoyed in the 1960s were later tested as the 1970s and recession hit. In 1979 British Steel, since 1967 a nationalised company, announced plans to close the steel manufacture at Corby with an estimated loss of 10,000 jobs. ROSAC, the Retention of Steelmaking in Corby, organised protests and arranged a workers march to Downing Street, and the town was at the centre of the 1980 national steel strike.

Local news programme ATV Today interviewed some of the families affected by the economic impact of the strike. This clip, preserved by the Media Archive for Central England, indicates the sense of community during this difficult time.

The strike ended, but closure hadn’t been prevented. Europe’s biggest integrated steel-making plant and tubeworks was gone and the redundancies came. 6,000 staff had lost their jobs by 1981 and a further 2,000 went over the next 10 years. It was devastating for the town. A news report, made for BBC Look East and preserved at the East Anglia Film Archive, captures the mood of the works a week before it closed.

During the 1980s the town experienced 30% unemployment and wrestled with associated social problems. Big companies came into the town but Corby had lost its industrial heart, and the skilled workers were only offered factory jobs. The dispiriting times led to many going abroad or back to Scotland.

In 2001, however, an urban regeneration committee – Catalyst Corby – was set up. Over the past 10 years, the town has witnessed investment with new housing initiatives, town centre redevelopment, new sports and culture amenities (the Corby Cube, the Rockingham Speedway and an Olympic-sized swimming pool) and a Stephen Fry-voiced advertising campaign to attract Londoners to move to the town.

Corby still has its problems, but the hope, the innovation and dynamism are returning. These days steel plays a minor part in the town, but tubing continues to roll off the line. The next time you cast your eyes on the London Eye, or the distinctive arch of Wembley stadium, the chances are you’re looking at steel tubes from Corby.