For his first masterpiece, Andrei Tarkovsky turned back the clock to the 15th-century life and times of Russia’s greatest icon painter. The result was censored in the USSR for two decades, but remains an extraordinary ode to the power of art. 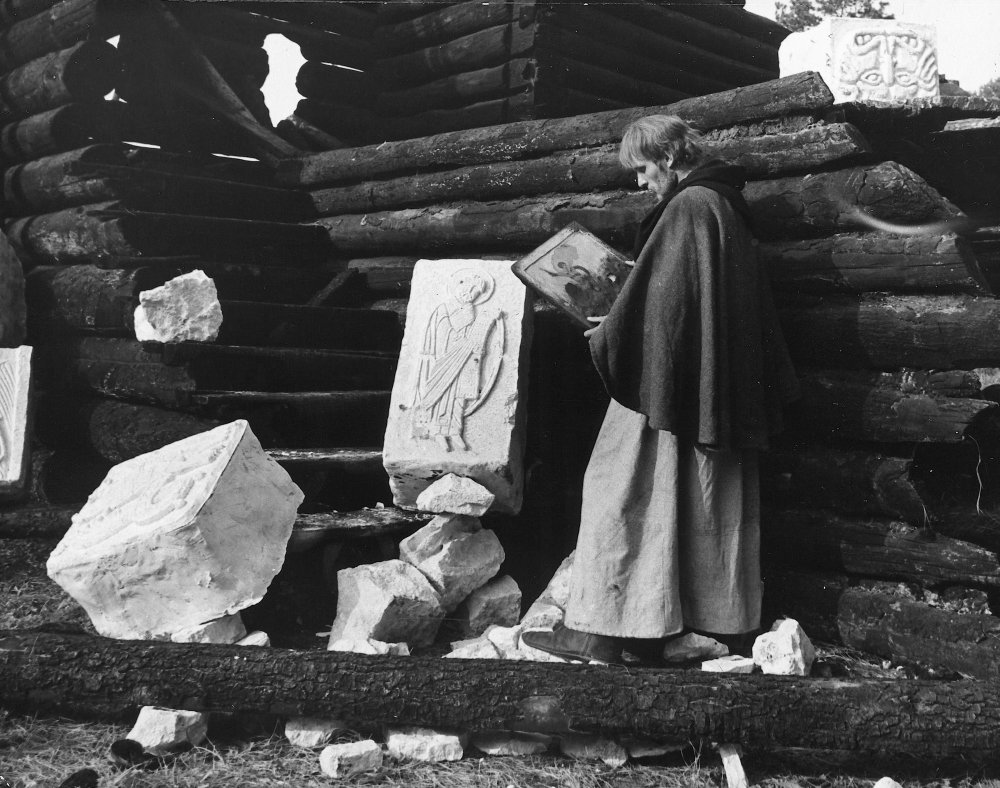 The BFI Southbank season Mirroring Tarkovsky: The Russian master and his director disciples runs in October and November.

With Sergei Eisenstein, Andrei Tarkovsky is perhaps the most influential of all Russian filmmakers. His body of work presents the struggle for survival of the Russian people in an idiosyncratic poetic style, with distinctively long takes. Tarkovsky’s films explore complex themes including artistic freedom, politics, religion, and the creation of art under a repressive regime. In one of his most well-known movies, Andrei Rublev (1966), Tarkovsky sought to create a film that shows the artist as “a world-historic figure” and “Christianity as an axiom of Russia’s historical identity”.

The film is set in the early 15th century in Russia and consists of eight parts, each focusing on a certain moment in the life of Andrei Rublev (c. 1360s-1430), an icon painter. The Soviet censors immediately banned screenings of the movie, deciding that it was a negative commentary on the current political situation in the Soviet Union. As a result, it wasn’t shown uncensored to Russian audiences until 1988, after Tarkovsky’s death and the year of Rublev’s canonisation. 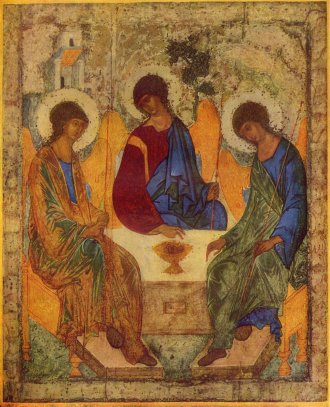 So who was this cultural figure from history who became the focus of Tarkovsky’s film? Andrei Rublev is not as famous in the west but, in Russia, he is considered to be their first known artist and one of the country’s greatest medieval painters. Tarkovsky had little to go on in creating his central character, as not much is known about his life, and only a few of his works survived. We do know however, that he was a monk at the Trinity Monastery, not far from Moscow, and a devout follower of St Sergius. Taking a vow of silence, Andrei focused his attention on painting. Rublev executed a large number of Orthodox icons and fresco paintings, and worked on several illuminated manuscripts. He was a pupil of Theophanes the Greek (c.1340-1410), a Greek-born painter working in Russia, who is also depicted in the film. Rublev assisted him with the decoration of two of the highest-profile churches in the country, respectively the Cathedral of the Annunciation in Moscow and the Cathedral of the Dormition in Vladimir.

You could argue that Tarkovsky turned his attention to Rublev’s story as a response to the cult of Rublev in 1960-70, but there are other, more convincing reasons for the director’s interest in this almost mythical figure. Passions for Andrei was the original title of the script Tarkovsky started working with, and it alludes to the main concept behind the work. The movie shows not only the passions and struggles of an artist in a medieval state, but the concerns of the whole nation during a period of political upheaval.

Tarkovsky once said: “Art exists to help us deal with the world’s imperfections.” The director, working in the Soviet Union and experiencing censorship, believed that creating culture was one of the most efficient ways to overcome the struggles of daily life in any period. Tarkovsky uses Rublev’s life as a metaphor for the role of the artist in society. Throughout different centuries, artists have created works that can improve the lives of people living in the same time. From this point of view, art could be compared with religion, serving similar goals. This is another reason why Rublev is a perfect symbol: he is a monk, an icon painter and a faithful believer. 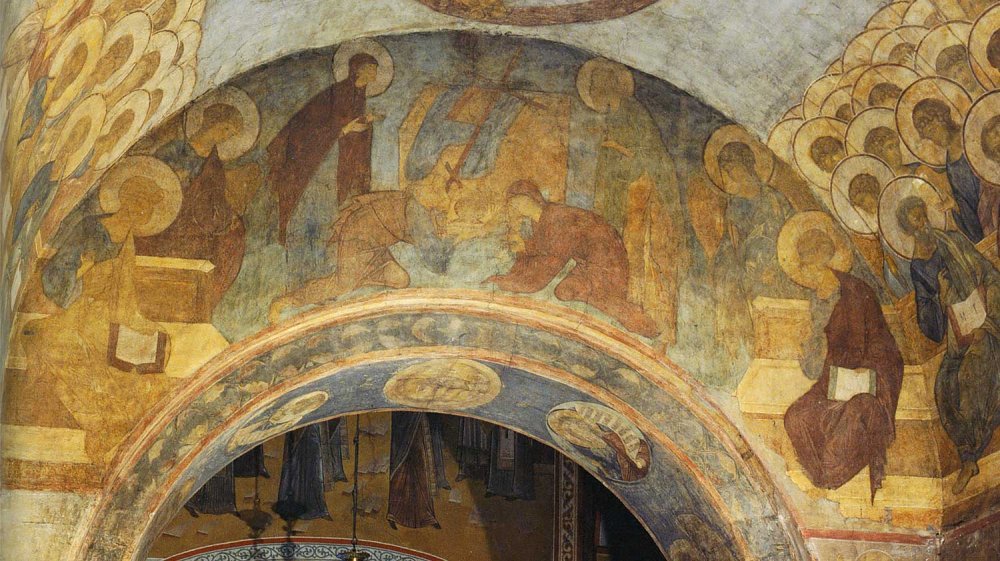 The Last Judgement by Andrei Rublev (painted in 1408)

Art and faith can provide solace to people, giving them hope and strength. Rublev lives and paints in one of the darkest and most desperate times in Russian history – the Mongol invasion, where people see only war, betrayal, destruction and death. Looking at the artist’s life against this bleak background, Tarkovsky manages to highlight the artist’s role as a saviour for the nation, helping its people to find hope and light through his works, and fusing art and faith in his serene frescoes and icons. The figures in Rublev’s paintings are invariably peaceful and calm. Perhaps for these reasons, his art came to be recognised as the epitome of religious orthodoxy and iconography. 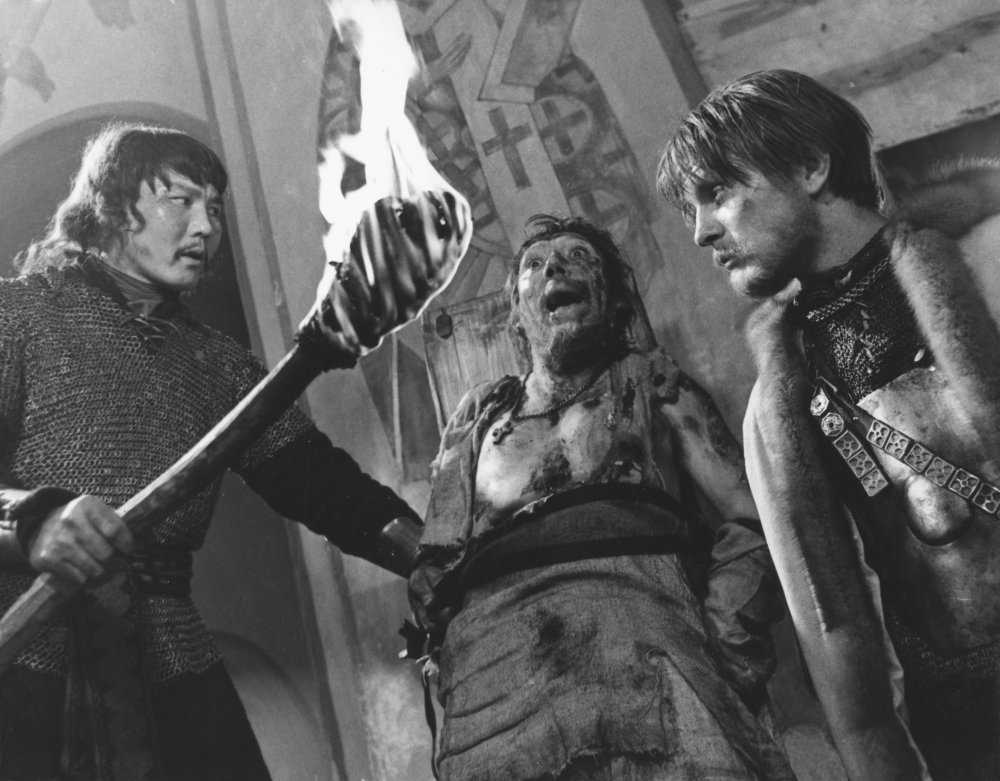 All these ideas are wonderfully welded together in the end of the film in one of the most vivid of the director’s devices. Shooting the entire movie in black and white, Tarkovsky finally dazzles the audience with close-ups of Rublev’s works, revealed for the first time during the movie in all their brilliance and colour. After more than two hours of sombre and austere imagery, the beauty of the frescoes amazes the viewers. The art, born from the endeavours and aspirations of the artist, is presented to the audience in all its grandeur, rising over the everyday like the man on the balloon at the beginning of the movie. This universal quality of the artist and his work makes the historical period irrelevant, turning it into a backdrop for the story.

Andrei Rublev is considered Tarkovsky’s first masterpiece; the work where his signature language as a director manifested itself fully for the first time. This movie is not only about this one artist, but even more so about how man, despite living through a challenging period in history, can survive and triumph in spite of contemporary political and social difficulties.