Celebrating short-form filmmaking across the charity sector, the first Charity Film Awards gave top prize to a St John Ambulance film teaching people how to deal with a choking baby. 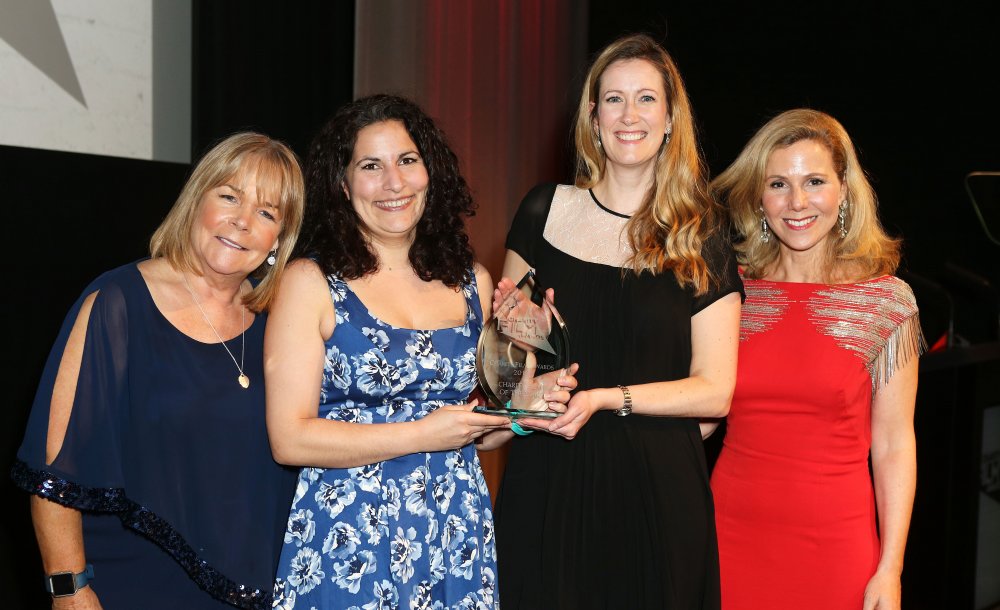 The winners collecting on behalf of St John Ambulance with Linda Robson (left), who presented the award, and host Sally Phillips (right)

On 15 March, BAFTA hosted the inaugural Charity Film Awards, an event by turns heart-warming, heart-wrenching, sometimes fun, always fascinating. Sally Phillips expertly compered, with other celebs on hand to give gongs, and no Oscar-like mistakes.

The first UK film awards wholly devoted to charity commissions, they paint a thought-provoking picture of the voluntary world, which comprises some 198,000 registered charities with enormously diverse functions and funding levels, and the range of creative techniques deployed to advance their causes. The awards also provide interesting context for broader social debates about the role of charities, nationally and globally, in the 21st century.

The story of charity film began early in the century before. What’s new is the online media landscape in which organisations function today, making it easier and more necessary for charities to produce and distribute moving images. That they add yet more content to a video-saturated world should also place a premium not just on doing it but on doing it well.

The awards are the brainchild of events and PR specialist Simon Burton, who talks with missionary zeal about charities (“a charity’s job should not be to raise money but to change the world”), their use of video (“filmmaking is the most powerful tool in the marketing kit”) and a need for games to be raised (“we should be in a glorious age”).

He sees three prime functions for the awards: to recognise and reward best creative practice; to facilitate charities thinking more clearly about their filmmaking, by giving them a benchmark to measure it against; and to increase exposure to the films themselves and the causes behind them. Phillips reported that the awards process triggered some 250,000 additional views of charity films.

Where other competitions have a more business-to-business focus, with decisions made by creative professionals, the Charity Awards combine this with a general public element adding some ‘X factor’. Some 375 films were entered and subjected to a popular vote, with some 40,000 people voting. The process allowed them to opt into making a donation to the charity concerned, an offer taken up by 10% of voters.

This yielded a 37-film shortlist. The public then had a second vote, racking up a further 20,000 votes for the ‘people’s choice’ award, which went to the Soi Dog Foundation. Otherwise, the shortlist was turned over to professional judges.

One challenge when assessing charity films is to separate the film’s message (in many cases inherently emotive) from the effectiveness of its delivery. Interestingly the awards were categorised not by genre or function but by the commissioning charity’s annual turnover. Interestingly, too, the awards proved (to this viewer) that client wealth and production quality are not neatly correlated. Overall, the shortlists contained a mixed bag: from well-intentioned, utterly generic videos to memorable but needlessly stylish ones. Then there were the projects that hit the spot with the perfect package.

The winners (categories divided by annual turnover of commissioning charity)

Charities whose turnover falls below £10,000 threw up a strong field of unpretentious shorts. Honourable mention from me for the soundtracks of films for SWIM and Network for Surviving Stalking. Unlike so much charity messaging, burdened by the dreaded copyright-free ‘sensitive’ piano score, the first stands out for use of song, the second for daring to skip music altogether.

But the justly popular winner was a film for Communities for Development, a pleasing example of charity filmmaking with a sense of humour. Its gentle subversion of viewer expectations easily steers it clear of feeling ‘worthy’ and any danger of objectifying its subjects.

Moving up the ladder, I expected the gold for charities in the £10k to £100k bracket to be taken by a stylised, music video-influenced single-shot film on female genital mutilation for Integrate UK. It actually went to I Won’t Go Quiet, a campaign film for bereavement charity The Loss Foundation that to my mind was driven by several good ideas, but possibly too many, not completely integrated into a coherent package.

Nominees in the £100k to £500k category were all solid, streetwise productions. The winner was this punchy, quietly confident piece of filmmaking for SALVE, which blends its ingredients freshly and well.

Support and Love Via Education International (2016)

Next up, charities clocking in between £500,000 and £5m. I rather liked Dementia UK’s simple, moving documentary, which came away gong-less, but the judges were undoubtedly wise to plump for The Forever Project. Promoting an important educational initiative, it was one of the most fluently polished productions we saw.

Charities in the £5m to £50m bracket offered in my view the most consistently impressive shortlist, with virtually all the finalists being of high standard. I was slightly surprised that the film for War Child, the most visually stylish in any category, only made it to bronze. I also liked the very different high concepts of Don’t Fear Your Foe and Does Emma Need Benefits? (the most political film in contention).

But I can’t quibble with the judges’ decision to award gold to an informative, beautifully simple short for Royal Trinity Hospice, whose homeliness belies a supremely thought-through approach to both visual design and voiceover script. If I’m not mistaken our compere discreetly wiped away a tear as it played on BAFTA’s screen.

Interestingly, the ‘megabucks’ category, covering charities in the £50m bracket, yielded a generally weaker roster, with the excellent The Chokeables surprisingly beaten to gold by an Alzheimer’s Society film serving a good cause with a middling production.

Charity film of the year winner

So to the grand climax, which combined judges’ rating and popular votes to produce a winner. All films on the shortlists were now back in contention, and it was The Chokeables, for St John Ambulance, that came through the middle to pick up the prize for best charity film of the year. In the best tradition of short-form public information, this simple, elegant celebrity-voiced animation has, it’s reported, directly saved 53 lives.

It will be fascinating to see how the Charity Film Awards, and charity film as a sector, develop in years to come.