One of the great Paris films, Jacques Rivette’s Céline and Julie Go Boating makes magic and mischief on the streets of the French capital. How have those streets changed today? 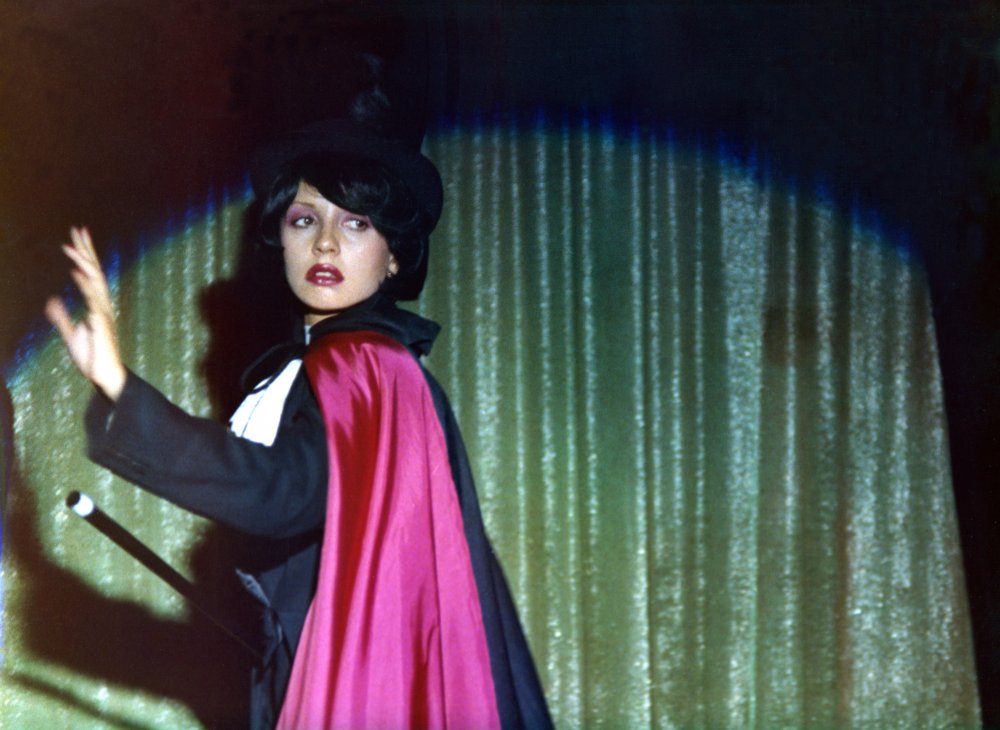 Jacques Rivette’s French New Wave masterpiece Céline and Julie Go Boating is a tale of time-travel and female friendship set in the French capital. Two women – librarian Julie (Dominique Labourier) and illusionist Céline (Juliet Berto) – meet and become entangled in a murder mystery after entering a strange mansion that propels them into the past. Rivette weaves a complex web of fantasy and melodrama, with flashbacks, identity swaps and possible parallel realities.

Its knotty narrative sounds like a head-scratcher, but visually it’s fairly simple, with the director opting to shoot – on 16mm – on the streets of Paris, mostly in Montmartre. If you’re curious, here’s how the locations from Rivette’s cult favourite have changed in the last four decades.

The park near Place Dalida 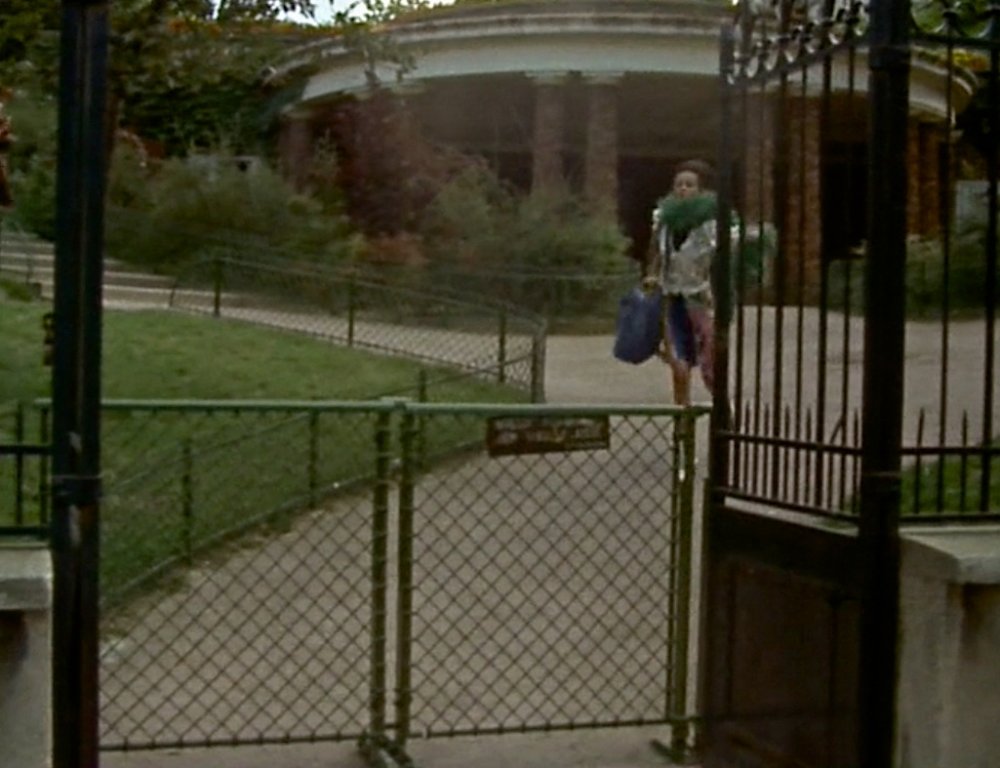 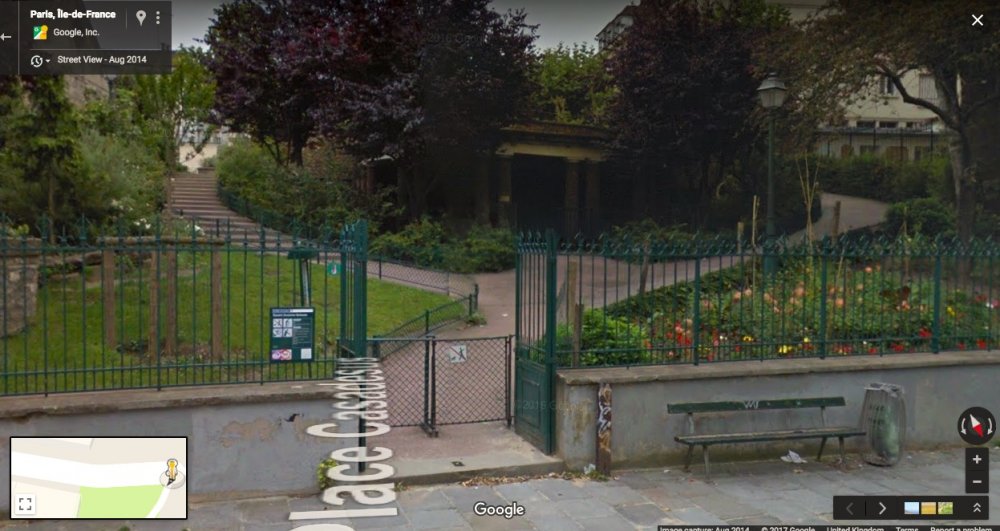 During the wordless 10-minute opening, Céline marches out of a Parisian park, unwittingly dropping her scarf and then a breadcrumb trail of other items. She’s followed by Julie, who struggles to keep up as she scoops up the items one by one. Rivette shoots the sequence as a Hitchcock-style cat-and-mouse chase, as Julie follows Céline through the streets of Montmartre. It all starts here, at a small park near Place Dalida, just off Rue Simon Dereure. Behind Céline is a public toilet, which was not so hidden by shrubs as it is today. But the exact same fence and gate remain intact, albeit with a new lick of green paint. 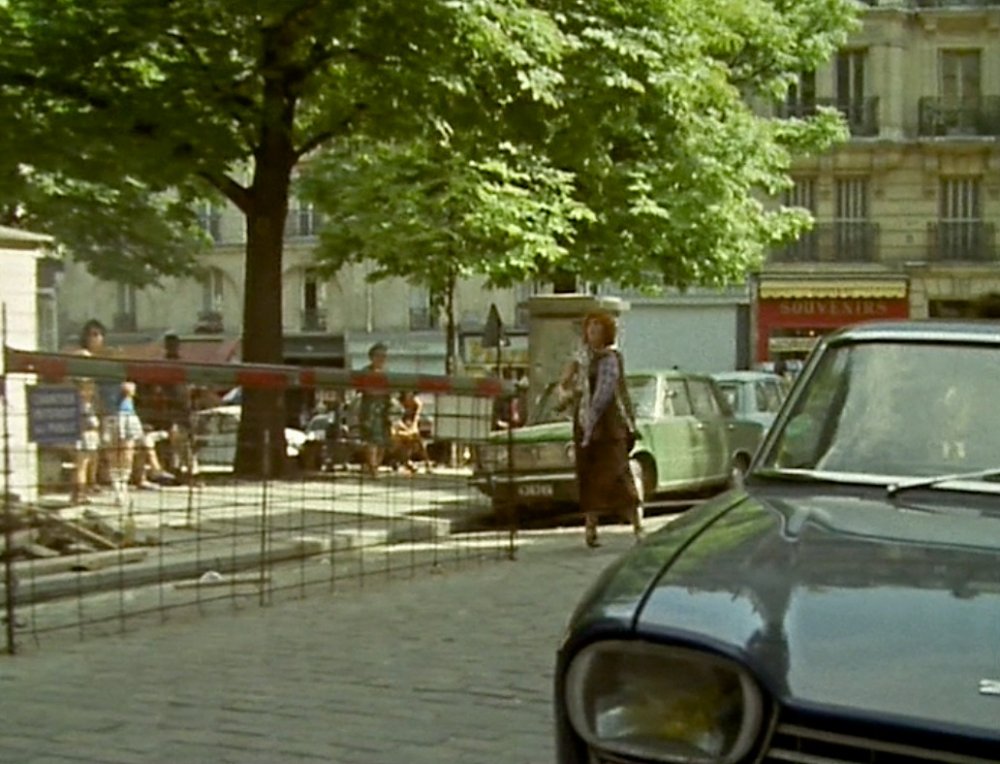 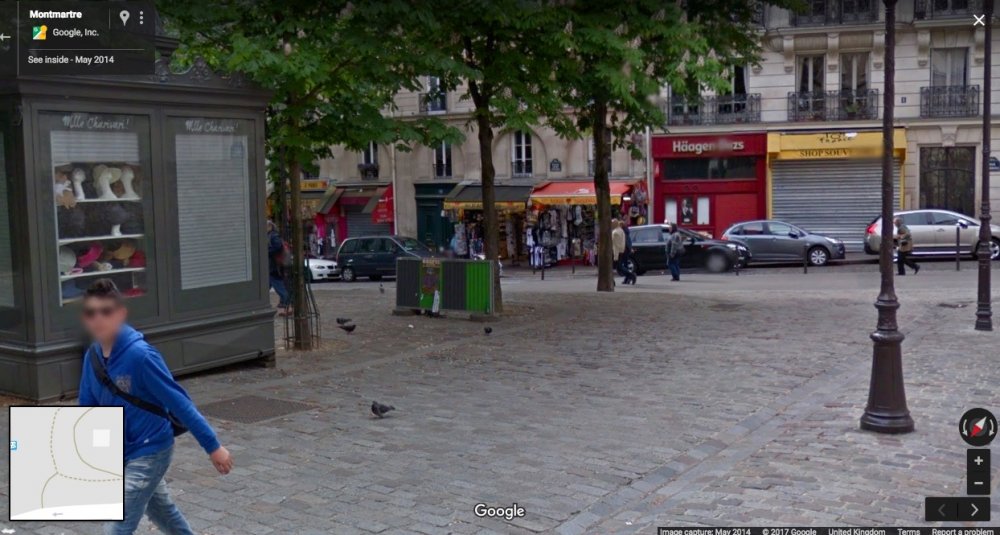 Continuing her pursuit, Julie follows Céline south-east, towards the bottom of Sacré Cœur. You see Julie on Rue Foyatier, emerging from the market (out of frame, to the left), facing the famous funicular at Montmartre. Behind her, you see a red souvenir shop. It’s a distinctive red, and remains so today – only, it’s no longer a souvenir shop, it’s a Häagen-Dazs. There is, however, a souvenir shop right next door. It’s hard to imagine there will ever not be one on this particular street.

The entrance to the funicular at Montmartre, below Sacré Cœur 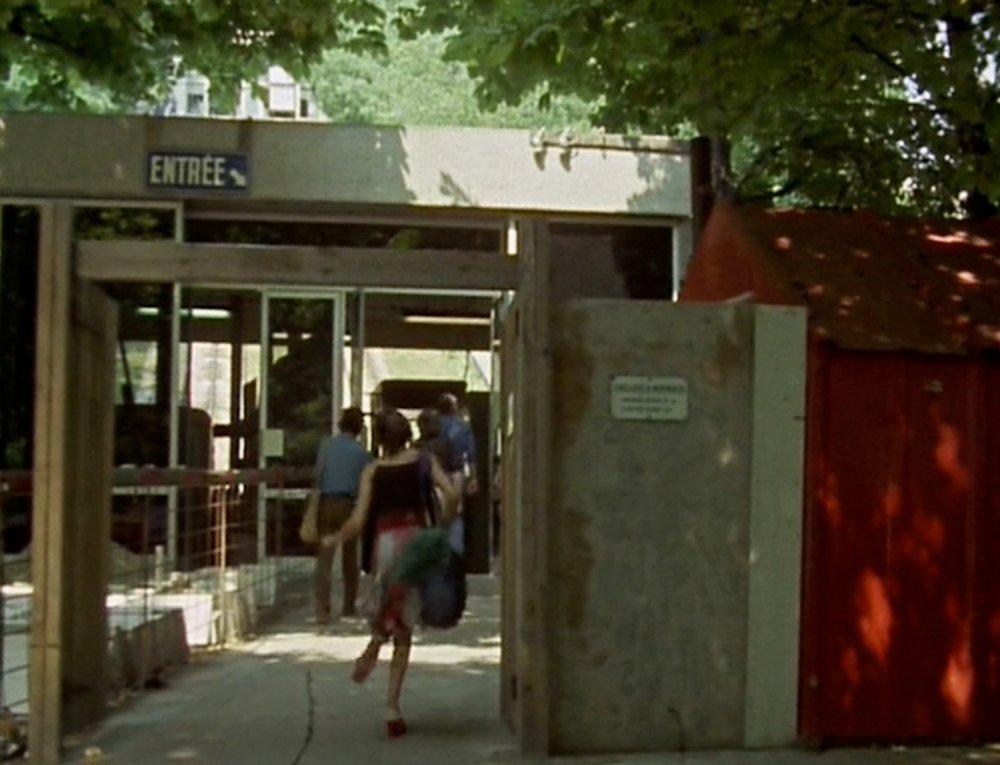 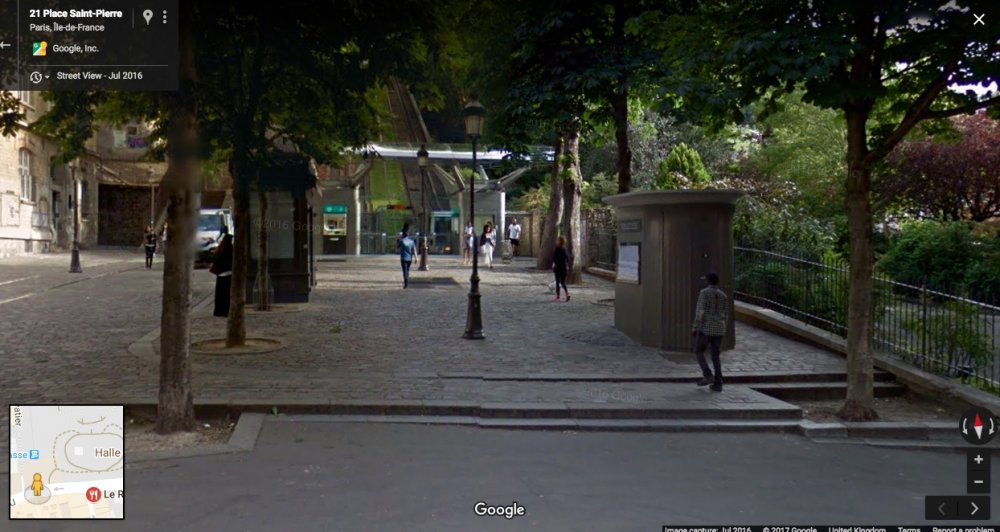 Looking in the opposite direction, from Céline’s perspective, you catch Julie at the entrance to the funicular. This is also on Rue Foyatier. Today the entrance is more modern, more minimal and spacious. In the film, you can see that they were already doing major works on the entrance. Fun fact: the lift opened on 13 July 1900 and was rebuilt in 1935, and then again in 1991. Meaning, don’t expect today’s shuttles to look as quaint as they do in the movie. 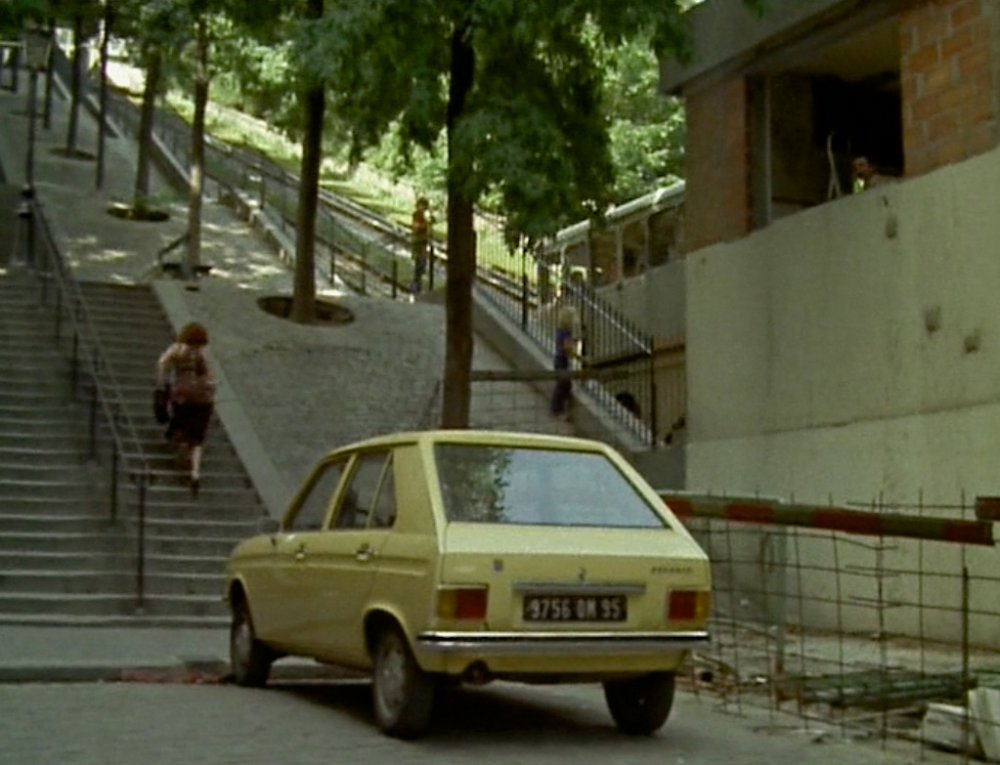 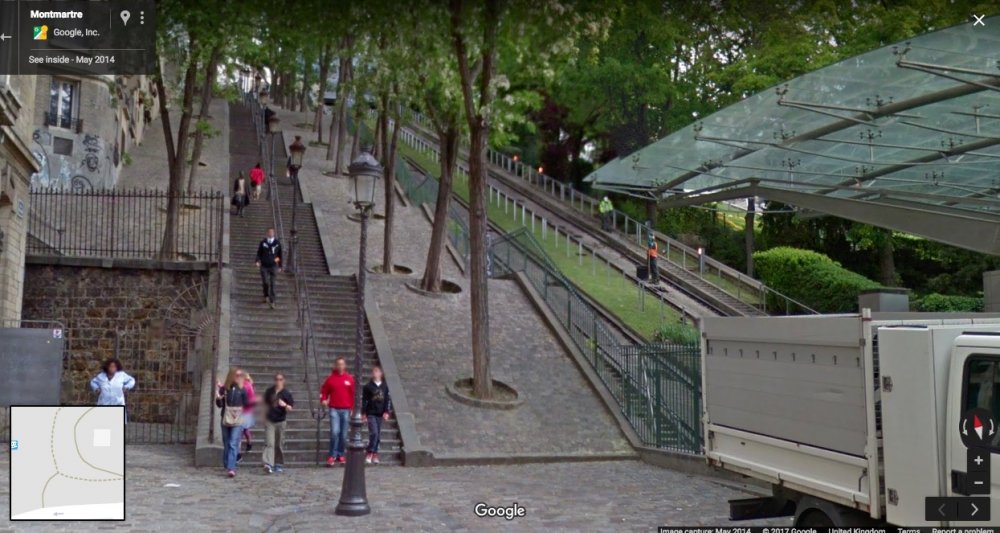 As Julie enters a shuttle and ascends towards Sacré Cœur – a ride that lasts exactly 1 minute 30 seconds – Céline follows on foot up the stairs. In Google Street View, you can clearly see the modern revamp, with the new sleek glass roof. Gone, too, are the old cars that once parked here. What does remain the same is the stairway and the trees that line the tram tracks. 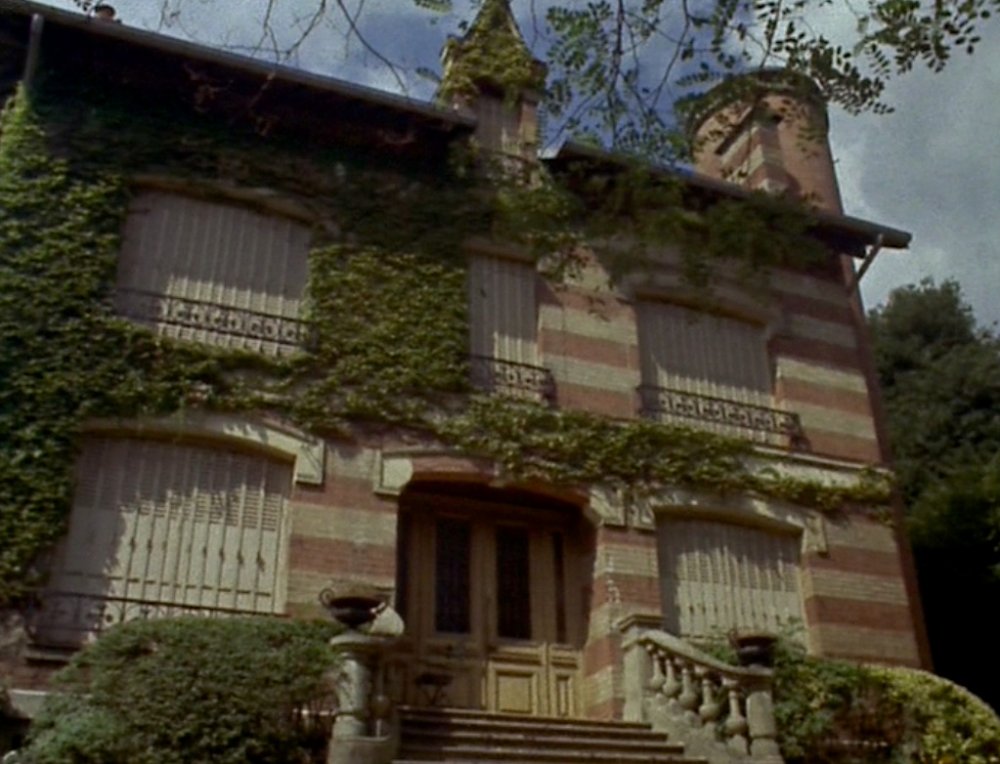 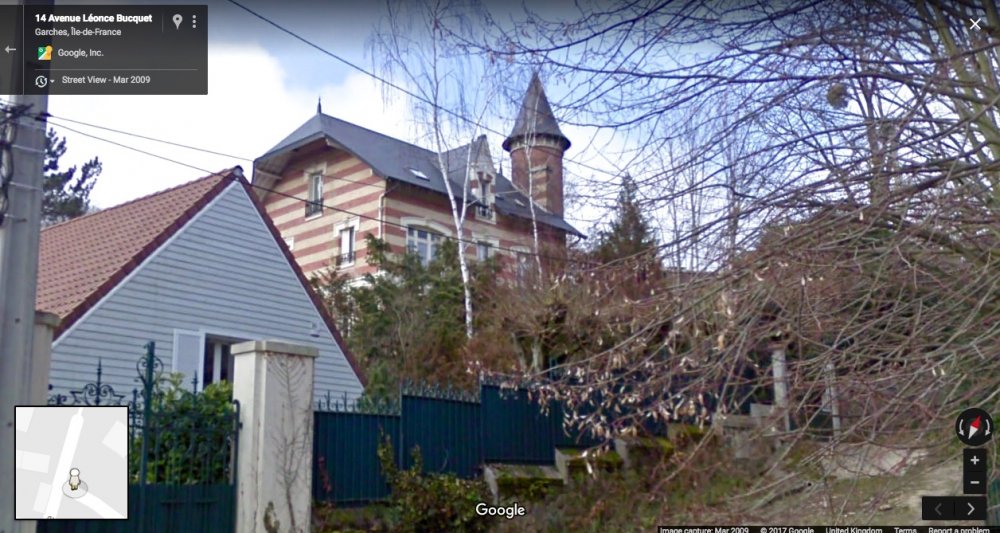 Things start to get a little strange when Céline enters this old mansion and is, seemingly, transported to another time, where she works as a nanny for a family. In the film, she notes the address as “7bis rue du Nadir aux Pommes”. In real life, it’s 7, avenue de Brétigny in Garches, a small town in the west of Paris. The house – with its distinctive turret and creamy stripes like a Battenberg cake – still stands in a walled off grounds. From the street, you can see the ivy has been stripped back, but those stripes are still there. 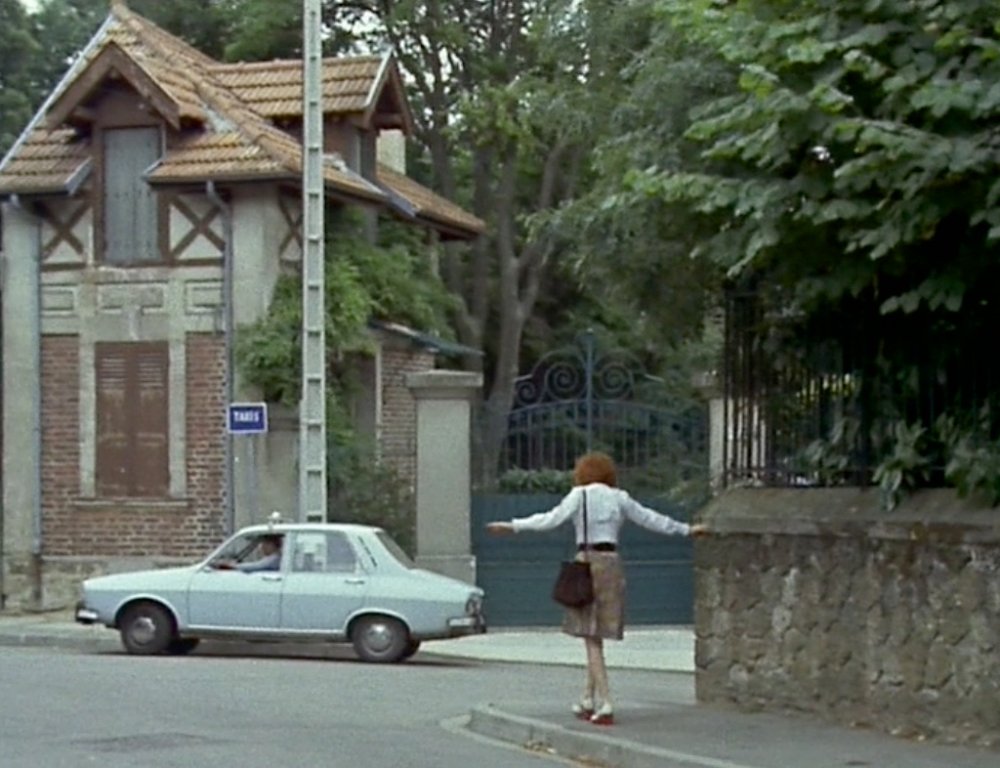 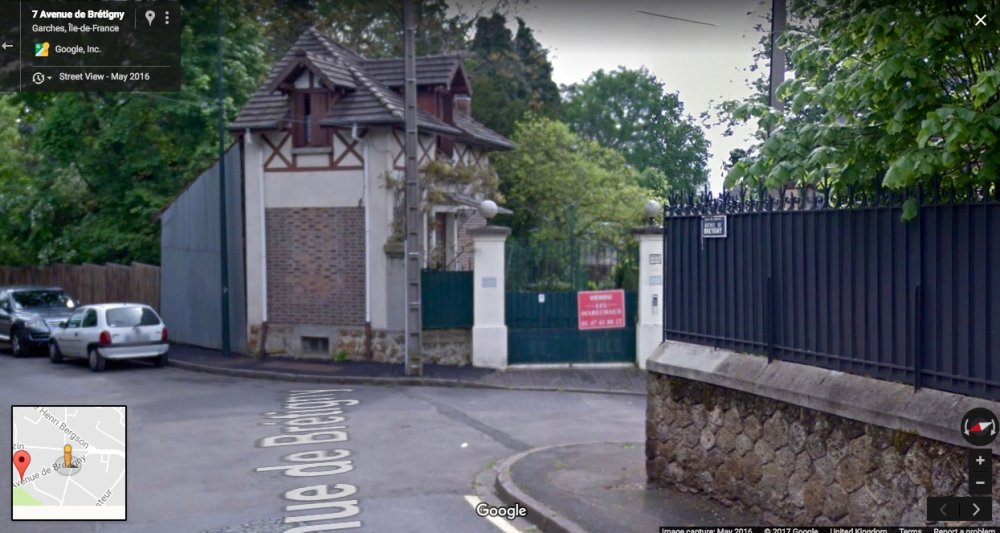 When Céline leaves that house in a daze – ejected by unseen hands at the door – she finds a waiting cab. This is on Avenue de Brétigny in Garches, where you can see what looks like an old tollbooth, by a gate that leads to a driveway. It’s in the same architectural style and wouldn’t look out of place in a Carlo Collodi story. And yes, it still stands, so you can visit the same corner today and do the same Céline walk, arms raised like a human plane.

The walkway towards Place Dalida 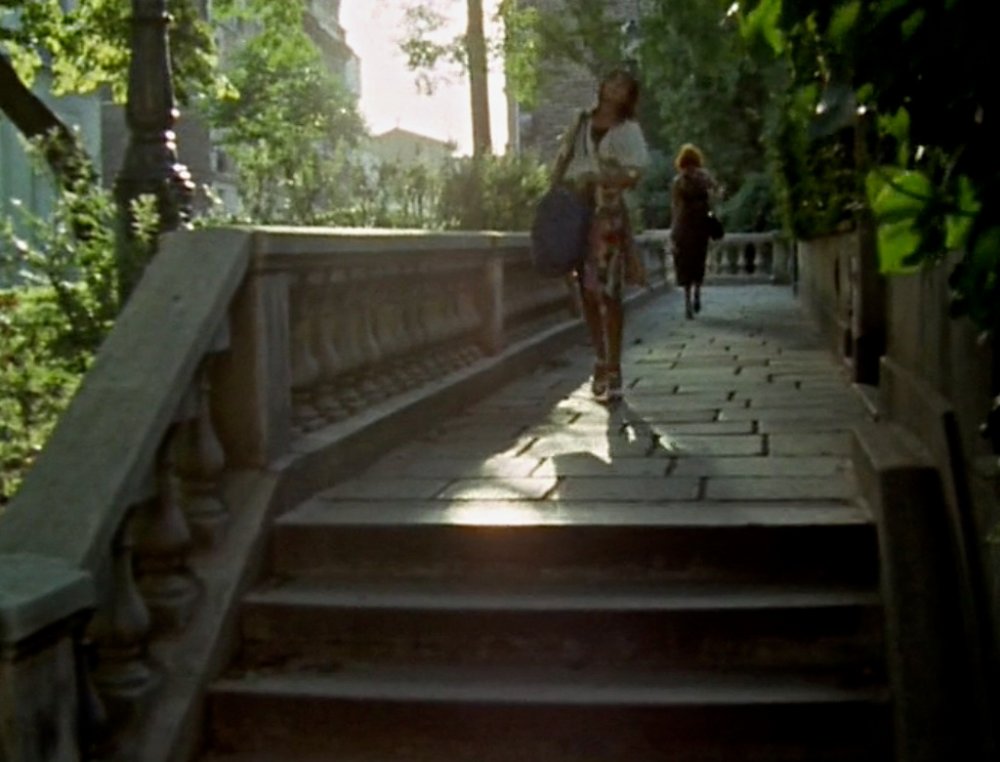 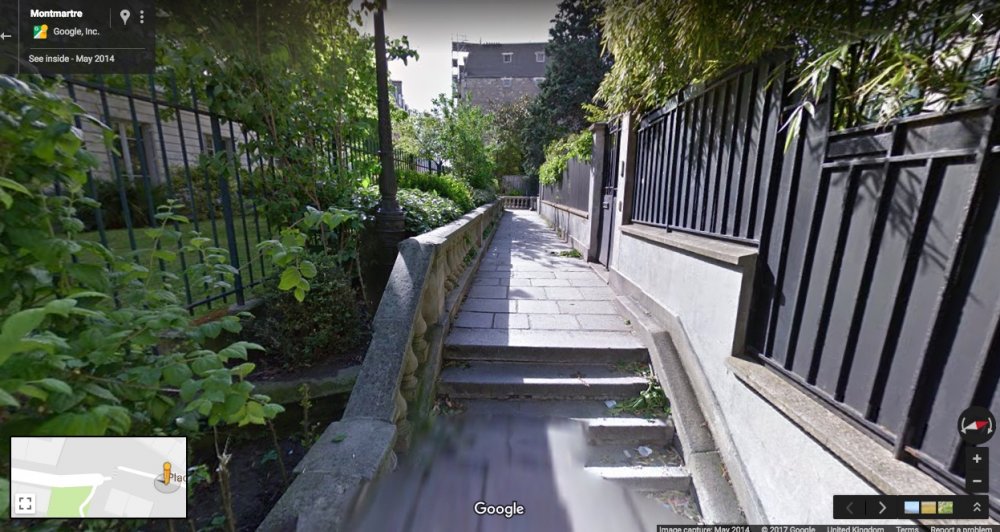 This walkway, where Céline is again seen following Julie, looks towards Place Dalida, a square in Montmartre dedicated to the diva of French music, Dalida, although, at the time of filming, it was an empty square at the corner of two streets. Following Dalida’s suicide in 1987, a bronze bust was erected to commemorate her. The walkway itself, which looks like it’s been plucked from a beautiful Italian town, remains much the same, the only addition being a couple of security fences.

The raised promenade on Rue Saint-Vincent 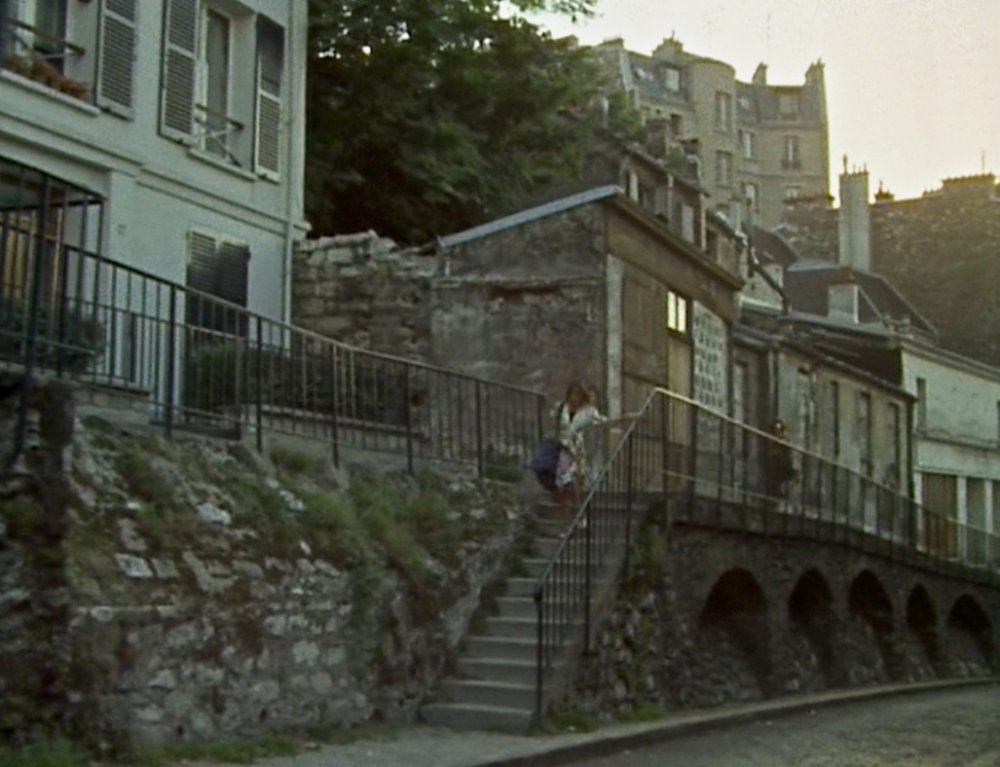 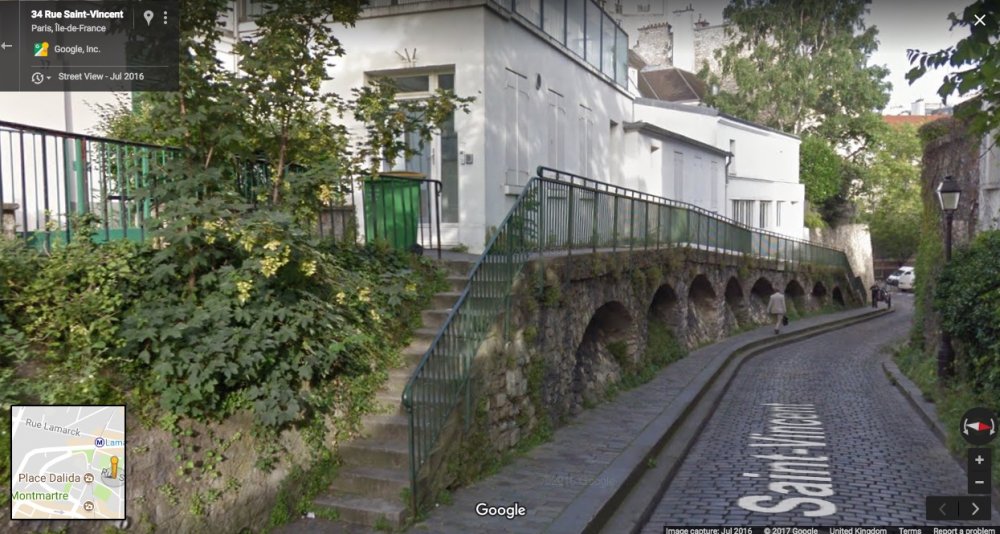 Just around the corner from Place Dalida, you can find the raised promenade where Rivette’s camera follows Céline and Julie as they descend an old stairway. It’s on Rue Saint-Vincent, just north of the Museum of Montmartre. Those distinctive cobbled arches are still there, and the area has retained its quaint vibe, albeit with a high price tag on the local properties. What’s important now, though, is that you can still trace Céline and Julie’s route step by step. Hop to it.