A brief history of punk cinema

Through every twist and turn of punk’s history, filmmakers have been there to capture the filth and the fury. 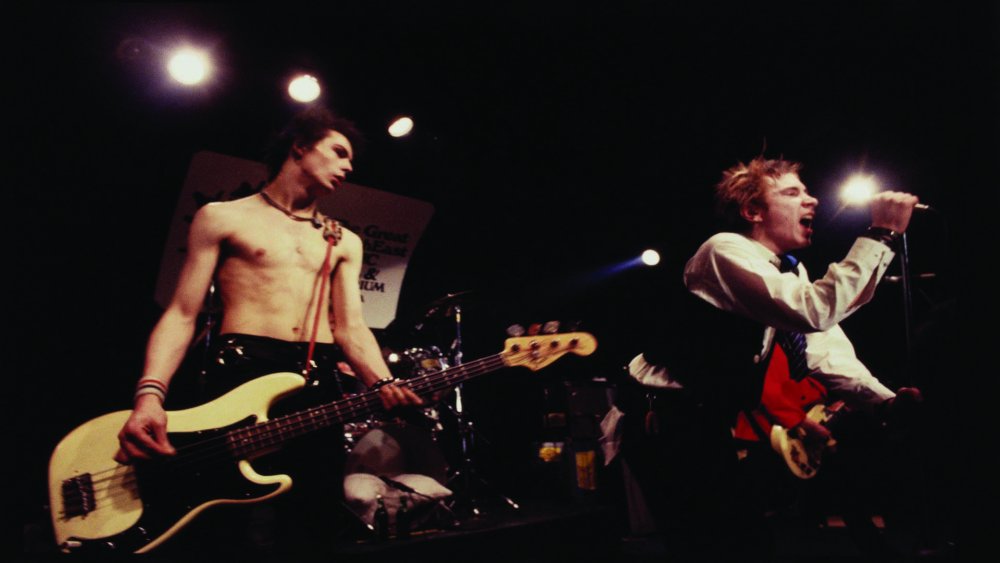 As soon as punk was born it was immortalised on screen, like a child actor thrust into the limelight, its magnetic screen presence undeniable. From the phenomenon’s early strides in the mid-70s as a provocative, expletive-spitting menace to society, clad in leather and safety pins, to its gentler days as a radio-friendly genre that middle-aged people could nod their heads to, film has always brought punk into sharp focus – and continues to do so.

Its scattershot history has been traced in countless TV documentaries that attempt to condense all things punk into a snappy 60 minutes. Typically, these tell a patchy story, awkwardly leaping from the Sex Pistols to Black Flag, from post-punk to pop punk. But looking further afield, at films that lay bare specific sub-genres – hardcore, queercore and everything in between – it’s possible to piece together a more comprehensive history, albeit one that’s still incomplete. So, as a window into a rich history of punk, here are the films that collectively chronicle the changing shape of the genre across four decades.

Rewind to London, 1977. Filmmaker Wolfgang Büld is smack-dab in the middle of the city’s punk scene, documenting it as it explodes from pubs to clubs. Punk in London parachutes you into the heart of the music, to the Roxy Club, where X-Ray Spex are thrashing their guitars and crowds are pogoing like leaping salmon. The fans tell Büld the scene is a rebellion against ‘boring’ stadium rock like Led Zeppelin and Black Sabbath. To them, punk is a bold stage-dive into something more exciting, more daring. The vérité-style documentary teleports you to legendary shows – Subway Sect, The Adverts, The Clash – and ushers you along the King’s Road, past Malcolm McLaren and Vivienne Westwood’s famous shop where the Sex Pistols got kitted out. There’s zero nostalgia here; only a filmmaker armed with a camera and the urge to document what lies in front of it. 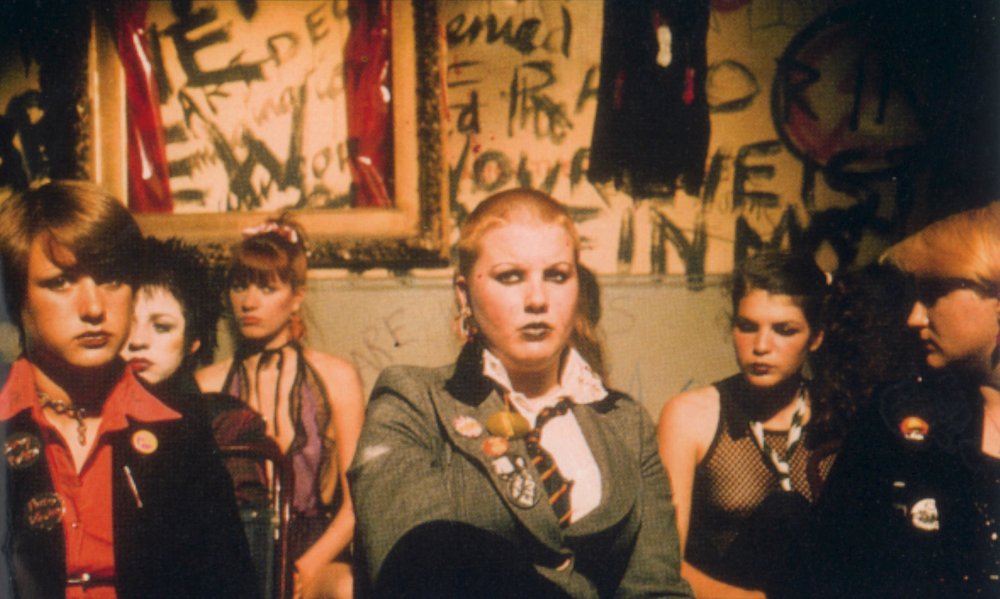 The following year Derek Jarman dished up Jubilee, a punk oddity that places Queen Elizabeth I in a drizzly late 20th-century Britain where girl gangs dodge truncheon-wielding police. It stars Adam Ant and Toyah Willcox, and features some of the most eye-popping make-up ever committed to celluloid. Made for a paltry £200,000, the film is the cinematic cover of ‘God Save the Queen’, exuding the same air of anarchy and lawless London as the Sex Pistols song. While Jarman was shooting it, Malcolm McLaren was in Hollywood looking to finance a Sex Pistols film. 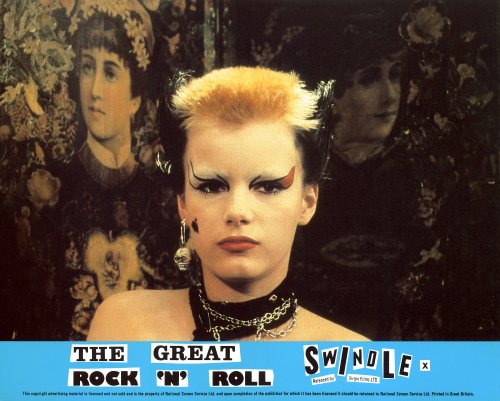 Two years later, The Great Rock ‘n’ Roll Swindle was released. In it, McLaren features prominently as the man who manipulates the Sex Pistols. Notably, John Lydon refused to have anything to do with the production, appearing only in archive footage. The film, also featuring an early Sting cameo, is effectively the Sex Pistols’ attempt at a Hard Day’s Night-style movie.

Other footage from that era took decades to reach our eyes. Julien Temple’s 2000 documentary The Filth and the Fury flashes back to 1976 and juxtaposes archive footage of the Sex Pistols with old Laurence Olivier movies and Michael Fish weather reports. The film captures a time before punk was, in Lydon’s words, “absorbed back into the system” and made “acceptable”, when headlines followed his band around like a bad smell. Also from 2000, The Clash: Westway to the World transports us to the same heady times. Joe Strummer and co remember a Notting Hill Carnival in the late 70s where police charged the crowd. It became the genesis of the song ‘White Riot’. Strummer also remembers the effect reggae records had on him, particularly those played by DJ Don Letts (director of this film). “That Rasta-punk crossover was crucial to the whole scene… it was something else,” says Strummer.

US punk on film: from The Ramones to GG Allin

Across the pond The Ramones, who’d formed in 1974, had fawning fans lining up to see them. The band were immortalised on screen in Blitzkrieg Bop, a scuzzy 1978 documentary that shines a spotlight on CBGB’s as the central NYC location for burgeoning punk bands, a place described by Joey Ramone as “a bum bar on the Bowery”. Elsewhere, the film zooms in on Blondie and Dead Boys, the electrifying stage presence of the bands at their peak, and the explosion of energy that surfaced on New York’s Skid Row. 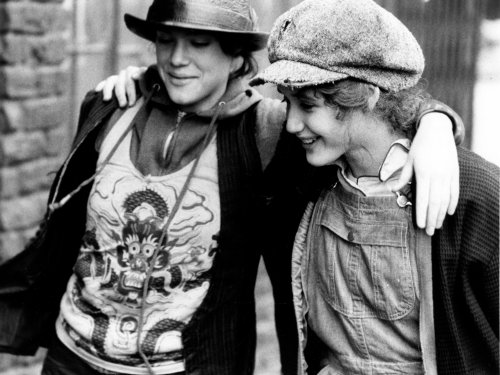 Two years later, the same grimy NYC scene was captured in Allan Moyle’s feature film Times Square. It follows two runaway teenage girls who form a punk band, and it boasts a fiery soundtrack featuring The Ramones’ ‘I Wanna Be Sedated’. Likewise, 1982’s Ladies & Gentlemen, The Fabulous Stains centres on three teenage girls who start a punk band, inspired by the notion that anyone, regardless of talent or skill, can play punk; it’s the attitude that counts: “We’re The Stains and we don’t put out.” This is around the time when every drooling punk acolyte was donning tight denim jeans, a black leather jacket, and wielding an out of tune guitar.

The controversy that clung to the Sex Pistols followed punk into the 80s. GG Allin had taken the baton from Sid Vicious and was pushing the limits of performance on stage – self-mutilation, defecating, attacking audience members. His debauched behaviour on stage was captured by filmmaker Todd Phillips in Hated: GG Allin and the Murder Junkies, a 1993 documentary that looks back at the troubled life of the provocateur. It’s raw and unflinching; an essential document of an intrepid punk performer.

Over in sunny LA, filmmaker Penelope Spheeris was sharpening her focus on the Circle Jerks, Germs, Black Flag, and the dawn of hardcore, in 1981’s The Decline of Western Civilization. The music is 10-times faster than the Sex Pistols and The Clash, the dancing more aggressive. In the film, Spheeris interviews fans as they emerge from the mosh pit and splices footage of sweaty punks screaming into microphones with footage of the same musicians backstage, calm and composed. A similar DIY spirit – fanzines, handmade flyers, etc – permeates Salad Days, a 2014 documentary illuminating the underground hardcore scene in Washington DC, in which bands like Minor Threat and Bad Brains blossomed. It also examines the oft-derided straight edge philosophy that split the scene like an axe through a log. 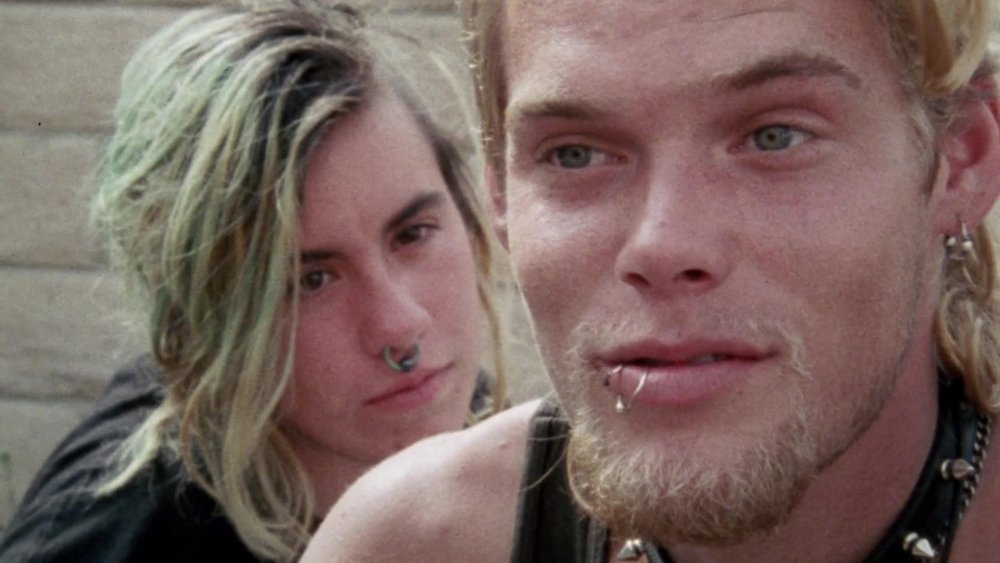 The Decline of Western Civilization (1981)

Those same bands – plus a handful from outside DC – pop up in American Hardcore, a 2006 documentary that takes a broader look at the sub-genre in America from 1980-86, boasting a conveyor belt of talking-head legends and raw footage of bands performing in dingy basements. This is about ‘underground’ music in every sense of the word.

Later, in the 90s, riot grrrl, an underground feminist hardcore punk movement, was born. Spearheading the movement was Kathleen Hanna, lead singer of Bikini Kill and subject of the 2013 documentary The Punk Singer. The film details how the music filtered feminism through a punk rock lens and showed everyone – girls and boys – that punk could be fun and colourful. The 90s colour palette also infuses SLC Punk!, a 1998 comedy about a stereotypical punk anarchist from Salt Lake City, played by Scream’s Matthew Lillard. Him and his goofball friends seem more concerned with spiking up their fluorescent Mohawks than upending the political establishment. Punk was being bent into new shapes yet again. 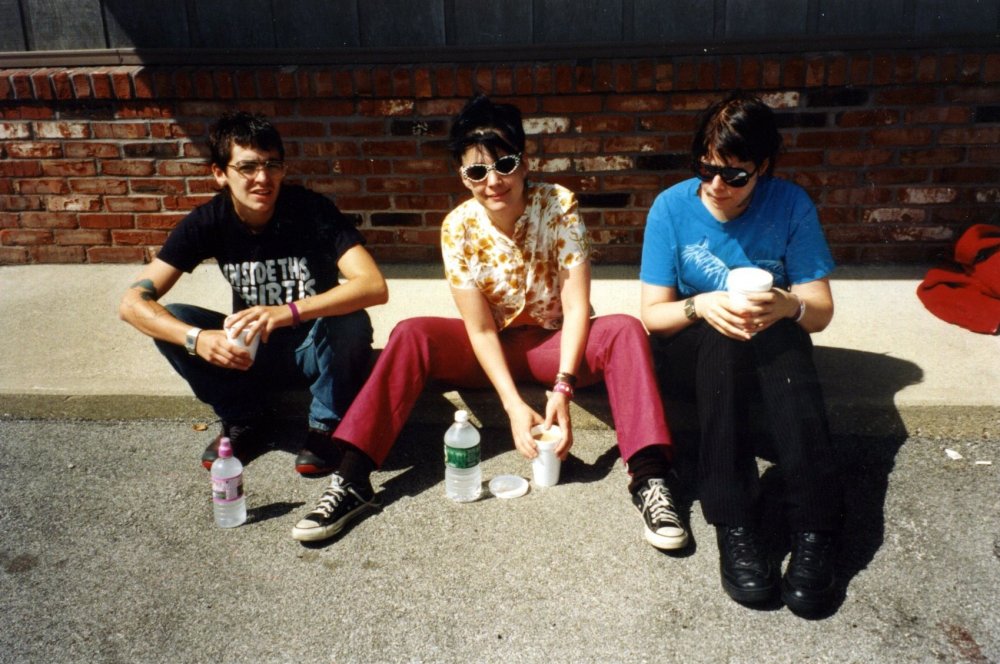 Whereas hardcore and riot grrrl were underground movements that slowly seeped into the mainstream, pop punk – the next step in the genre’s evolutionary chain – was embraced by MTV and radio stations almost the instant it was set to tape. The A&R people had caught a strong whiff of ‘commercial appeal’. It’s this moment that the 2007 documentary Punk’s Not Dead centres on, when bands influenced by the melodic punk of Bad Religion stepped into the spotlight. In the doc, we hear how young acts like Pennywise, NOFX, The Offspring, Green Day, and Rancid lead the charge and unabashedly injected a pop sensibility into punk. Two decades after punk’s inception, a revival had exploded, the ripples of which have since spread the world over.

In Myanmar, for example, teens living under a military dictatorship, isolated from the rest of the world, channelled their frustrations into punk. Yangon Calling (2013), Alexander Dluzak and Carsten Piefke’s award-winning documentary, throws a light on this hidden world, secretly filming punk shows and the musicians who dared to stand up against the authoritarian regime. Similarly, the idea of punk as a political tool underpins Pussy Riot: A Punk Prayer (2013). The film follows the feminist punk group and their imprisonment after an impromptu gig in a church where they sang of separating church and state. It harks back to punk’s roots as musical activism, a middle finger raised to the status quo, against conformity and artistic censorship. 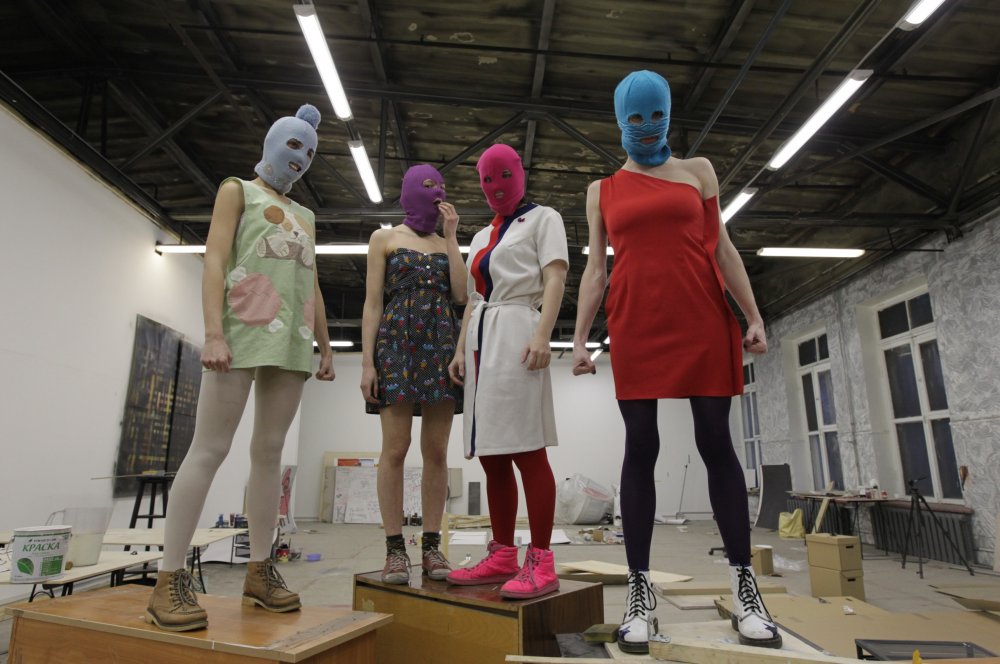 Today, it seems like documentaries about hitherto unknown pockets of punk are coming out all the time, whether they examine Scotland’s forgotten post-punk bands or an all-women ‘queercore’ punk band called Tribe 8. Just when you think you have the complete picture of punk’s history, a new piece of the puzzle is placed under your snout. The picture will never be HD-sharp. But that’s okay. Cinema is working on it, unearthing golden archive footage of your favourite obscure punk bands as we speak.