The cream of contemporary British designers got to work to create gothic special edition covers for eight titles in our BFI Film Classics book series. Here they talk us through their inspiration. 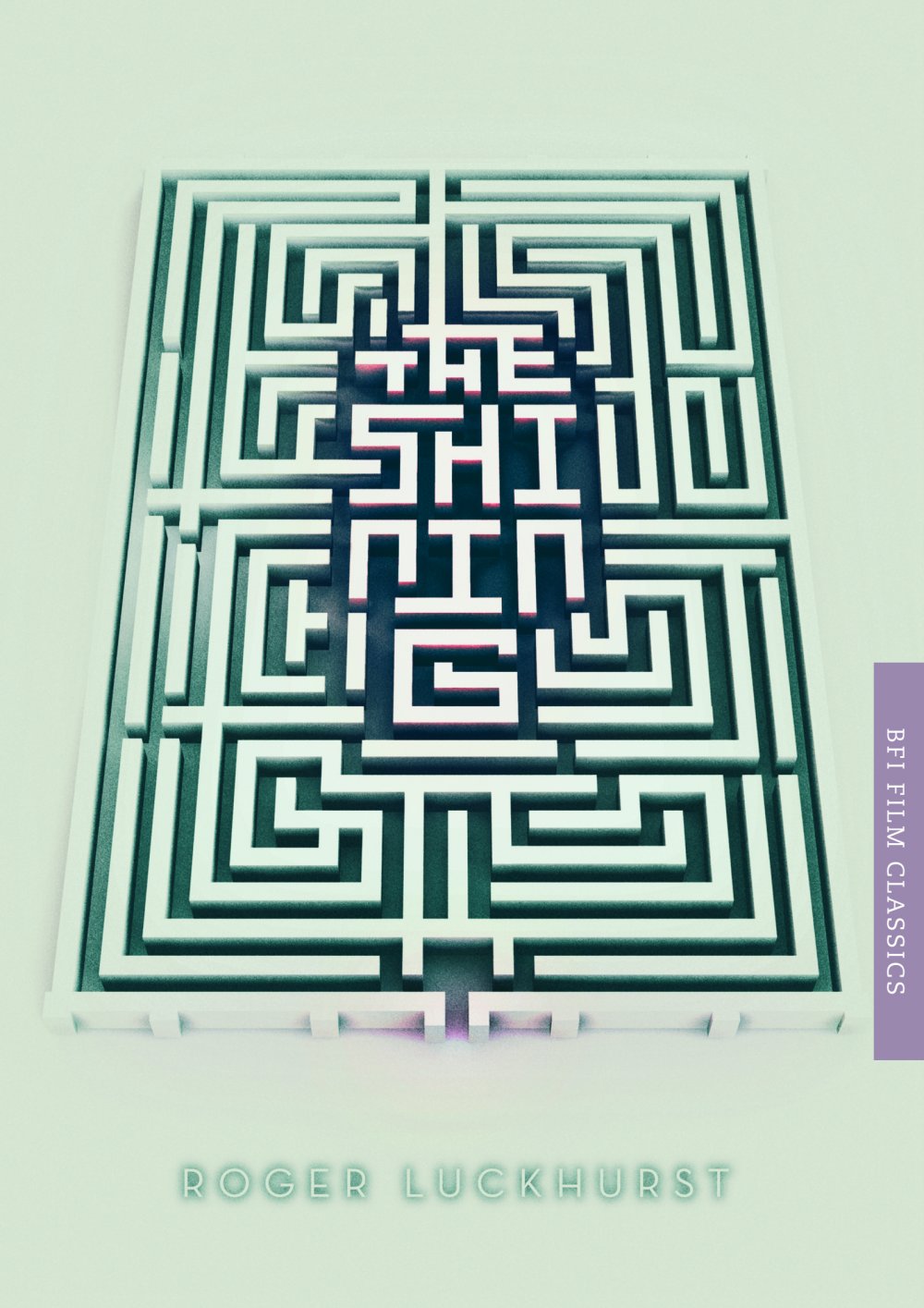 The maze is quite a major motif in The Shining (1980) and is where the film climaxes. It was also the image that really stuck with me since I watched it many, many years ago (that, and the creepy bear at the end).

I think that this is maybe related to getting lost as Jack does in the film – a feeling of never knowing what is around the corner and whether it will lead to your final destination. The Overlook Hotel is also laid out like a maze. I wanted the image to be very graphic and type led, so felt that the maze was a perfect tool to create a typographic cover. In the case of this design the final destination is the film title.

The idea was quite immediate but the process of creating it proved a little trickier. At first I was going to design it all in Photoshop as a 2D graphic, but in the end I felt that a graphic could look a little flat and I really wanted it to have depth. At this point I thought of making a 3D set which I would then photograph, but, after a few failed experiments with various materials and a lot of cleaning up, this was abandoned.

There was also a danger that the set would end up looking too model-like and thus too real. I wanted the image to have an otherworldly feel. I also wanted the cover to have a fairly cold, emotionless essence to it; something which Kubrick was famous for, and a criticism that Stephen King, the author of the book, makes against the film.

I felt that if the maze could be built and lit in a 3D program, I could apply the necessary textures and tone which would capture the effect I was looking for. The maze was eventually built in Maya, a 3D program. This was then brought back into Photoshop and manipulated to give it a slightly retro, organic feel and make it a bit more ‘my style’.

Queuing up outside the cinema in Shrewsbury to watch Superman II (1980). I think it was the first film I saw at the cinema. The anticipation of what I was about to see, and the world that lay indoors, was very exciting. 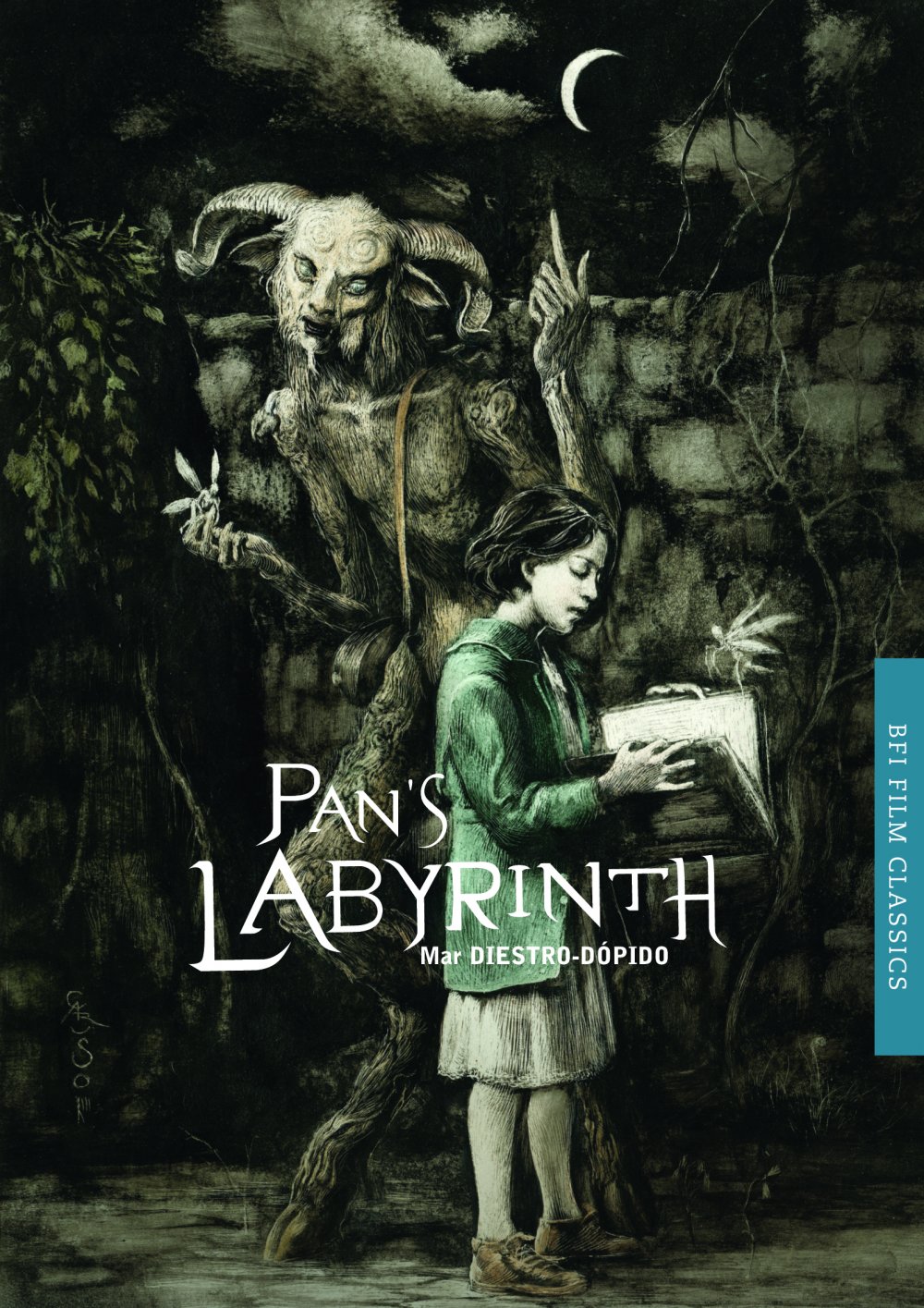 The concept is simple – it is a scene where the girl is trying to comprehend what she must do and Pan is reminding her of the position of the moon. Time is running short and the end will come.

This piece has been made by using washed ink on plastered cardboard. It was later scratched to create the highlights. 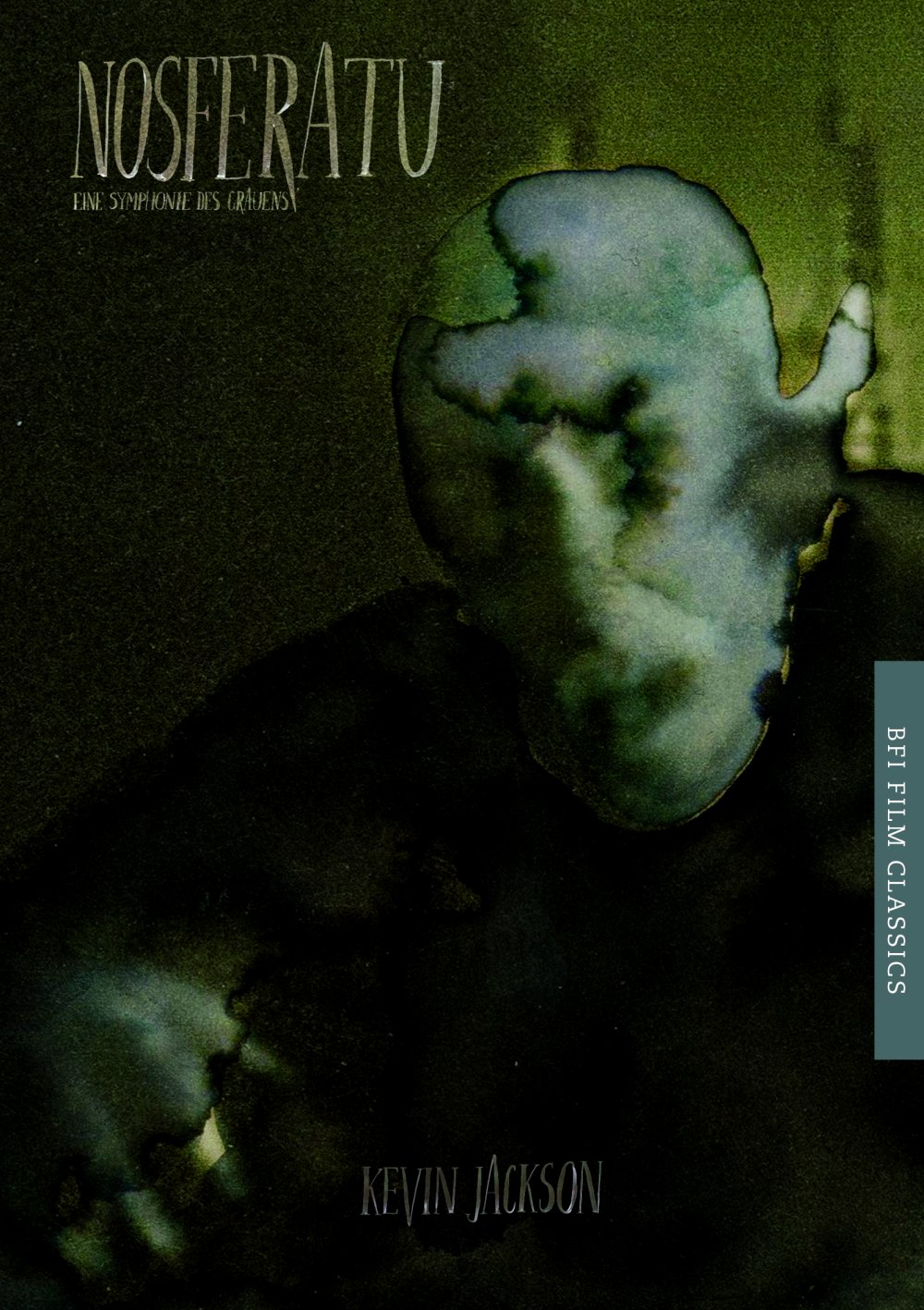 The first requirement I set myself was to create a portrait of Nosferatu and use it as the main part of the design. To my mind, it was important to present the figure directly facing the viewer, because Nosferatu was the first ever image of a vampire to be seen on a cinema screen.

Also, it was important for me to suggest the atmosphere of the silent film and old, distorted photographs, thus referring to the time in which the film was made. This is also why I used the greenish/grey palette and grainy pattern.

Interestingly, most of the subsequent cinematic representations of Bram Stoker’s Count Dracula character are both romanticised and eroticised, as in Francis Ford Coppola’s 1992 Bram Stoker’s Dracula.

But Murnau’s Nosferatu is represented as a creepy, human-like creature; tall, bony and distorted, with insane bulging eyes and utterly long, hooked fingers.

The vampire is shown as a foreign body, as the infection that penetrated society, spreading the plague and fear. That is why I attempted to create a character that evokes aversion and repugnance, seeming foreign and isolated. The insertion of typography, with the sharp and prolonged elements, also suggests these same themes. I have tried to harmonise the whole design by contrasting crude and rough images with fine and delicate typography.

To evoke the cinematic origin of the character, I used a printed screenshot from the film, digitally blown up and tinted. I then used ink and watercolour (wet-on-wet technique) to draw over the image. I combined the hand-drawn typography with the image using Photoshop.

As far as I can remember, it was André Hunebelle’s 1964 Fantômas. The image imprinted in my mind is that weird man wearing a creepy lifeless blue mask. Probably, this image particularly excited me because of a graffiti sign on the wall of the house where I lived, that said: ‘HERE WAS FANTOMAS’. Obviously, being a child I took the message literally. 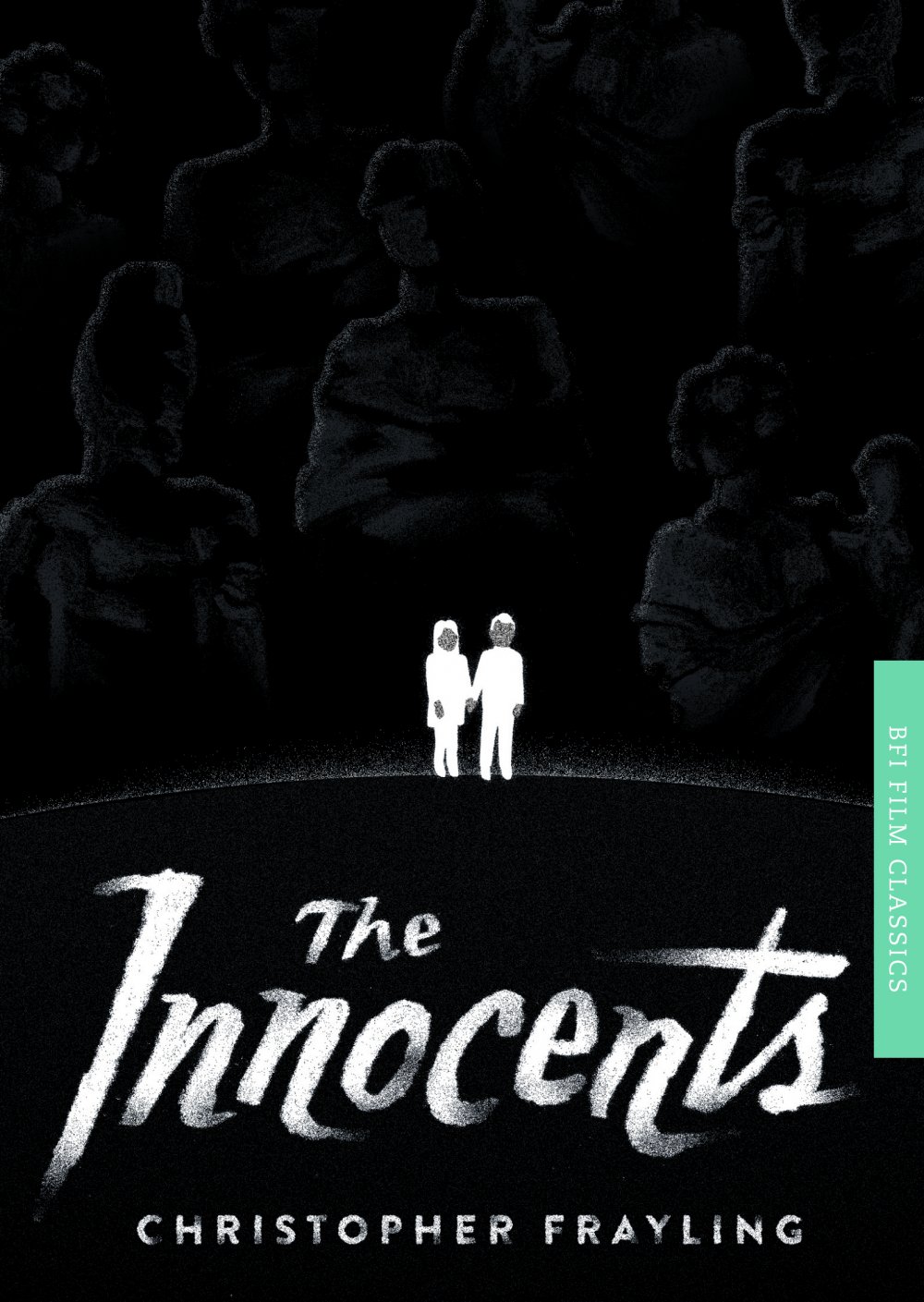 The close relationship between Miles and Flora is a central part of the film. This cover shows the two children, hand in hand, as very small figures. The larger figures looming in the background are the silhouettes of the creepy, half-decaying gothic statues that adorn the mansion and the grounds.

Throughout the film you’re not sure what’s just a statue and what’s really a ghost. The contrast between the large figures in the background and the small children in the foreground represents the relationship between the children and the ghosts that are controlling them.

I created most of the artwork on a long train journey from Cornwall to London, using a pencil and a small sketchbook. Once I was happy with the illustrations I photographed them on my iPhone (no scanner on the train!) and dropped them into Photoshop to tweak the colours and refine things a bit.

The lettering was done separately using watercolour and pencil, and again, a bit of Photoshop. The typography is inspired by the type that was used on the film’s original theatrical trailer from 1961.

I think my earliest film memory is probably The Lion King (1994) — I’m pretty sure this was the first film I ever saw at the cinema, when I was about five years old, and I remember crying when Mufasa died. Harrowing. 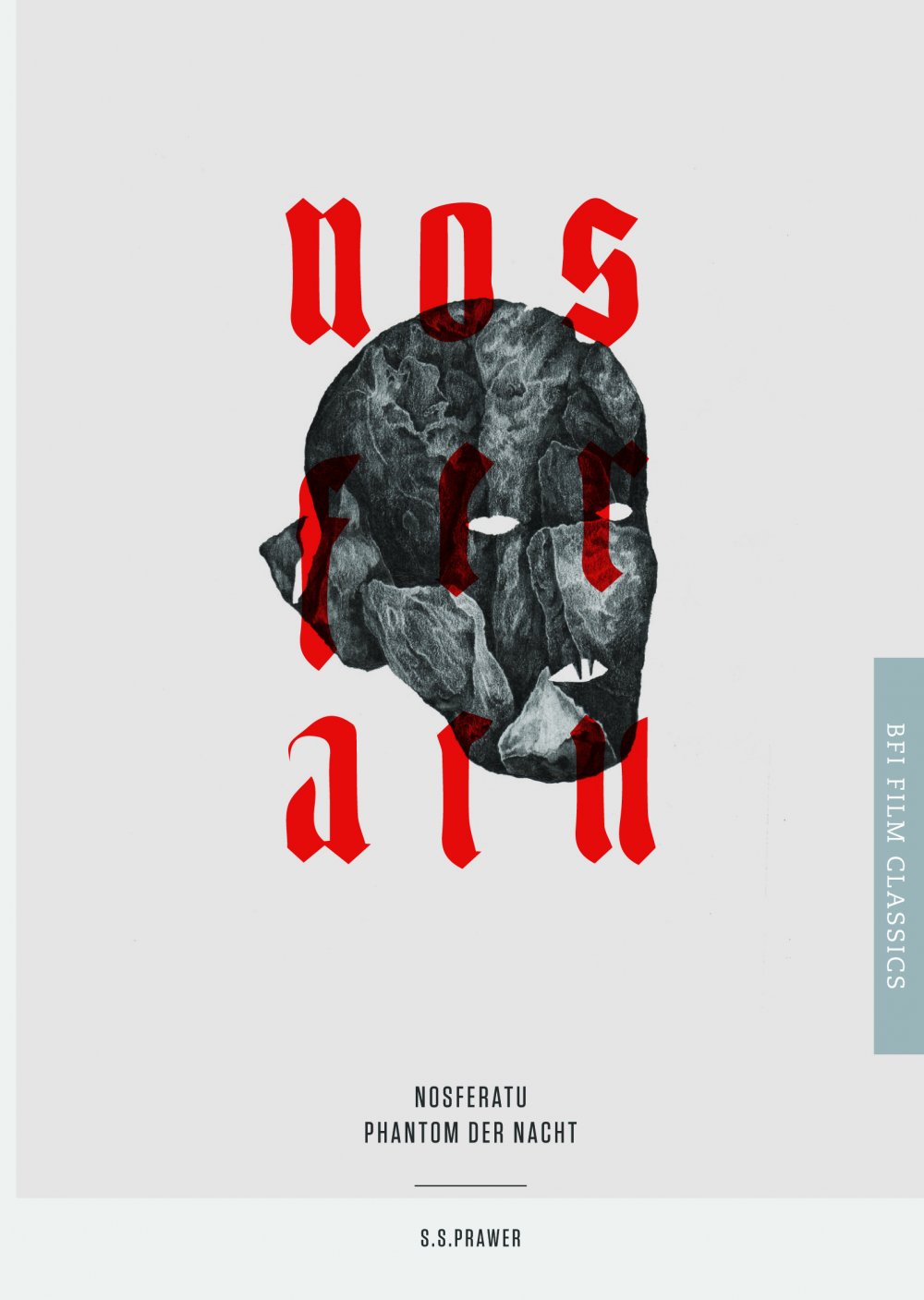 The idea behind my cover design was to focus on Count Dracula himself and the themes that vampires portray, but still deliver a simple, striking piece of design. Using a simple silhouette of the Count’s portrait to crop into an illustration of the baron rocky landscape creates a death-mask-like motif. I became interested in the curse of the vampire, exploring themes of disease and infection.

I work predominately in graphite. This particular piece was created with a couple of trusty mechanical pencils before being finished digitally.

Of my two earliest film memories, one is euphoric, the other terrifying. The first was Toy Story (1995). There are probably earlier memories, but this was hands down a turning point in my life. It’s my most vivid memory of going to the cinema, and to this day it stands as one of the finest pieces of film I have ever seen. The second was the 1958 original version of The Blob. I was scared and didn’t understand it. 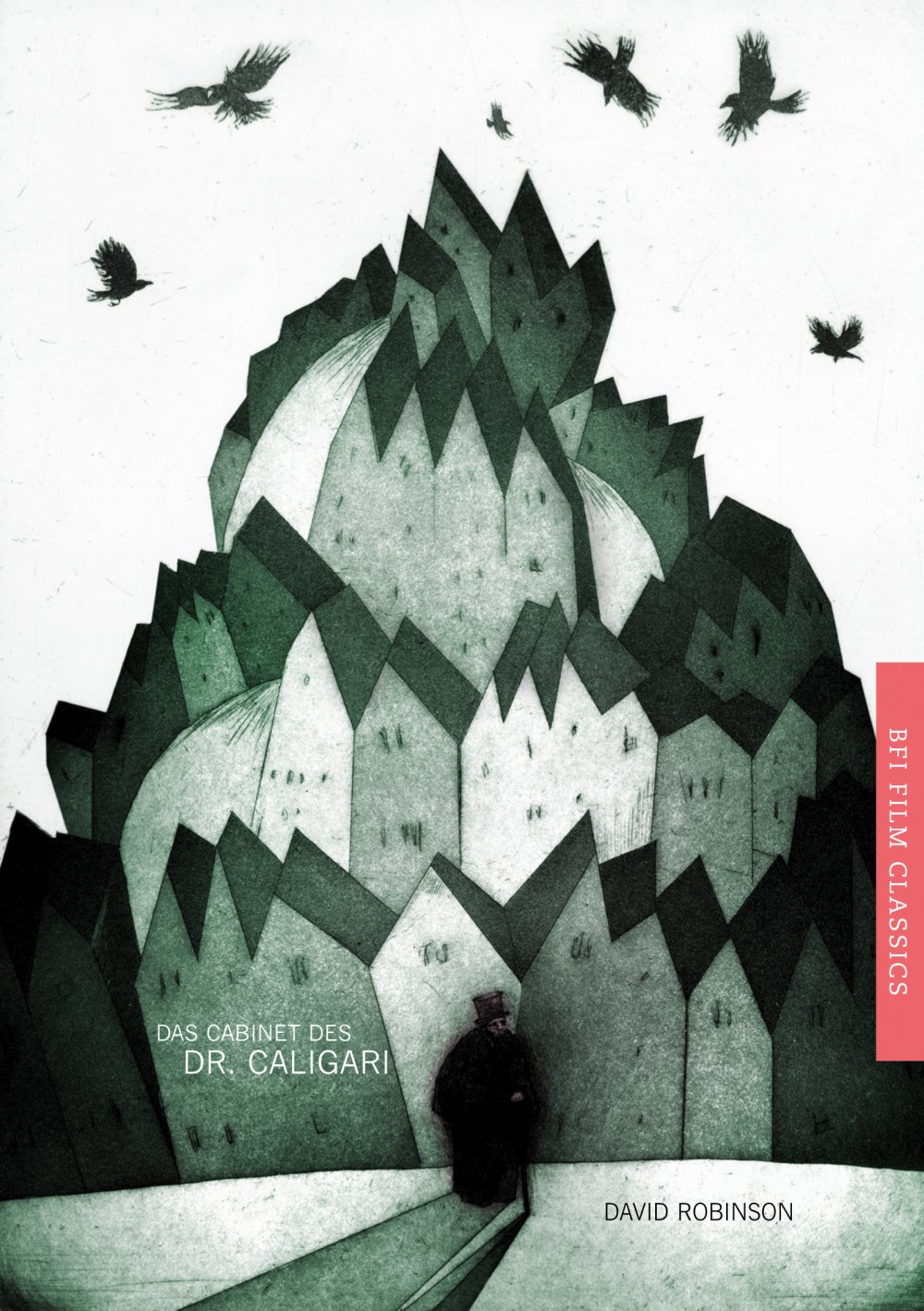 I’ve tried to encapsulate a sense of omen and isolation, which I felt were key parts of the film. In the film there is an increasing portent of things to come and the sinister events become evermore confused. Yet, by the end of the film, the past events seem quite simple and isolated.

On my cover I put Dr Caligari in the centre of the town but also on its outskirts. He is the key component of the story and yet, at the same time, not. To me it feels like he is on the outside looking in and, like all the characters, on his own. I added the crows to reinforce that sense of impending downfall.

The original image is a print from a copper plate etching. To create it I used a mixture of techniques, starting with hard-ground etching, where you apply a thin layer of wax to the surface, scrape your image into it and then submerge it in acid. The tones were achieved using Aquatint, and the scratches and bits of texture were made by scratching directly onto the plate (dry-point etching).

My memory is exceptionally bad, so the hazy memories from my childhood are hard to place. The film that first comes to mind is Fantasia (1940) and specifically the scene depicting the Sorcerer’s Apprentice. I still find the combination of the images and music inspiring and wouldn’t be surprised if it has influenced my work.

Other than that, I have a strong memory of going to see a lot of Laurel and Hardy films in Birmingham (complete with live musical accompaniment). 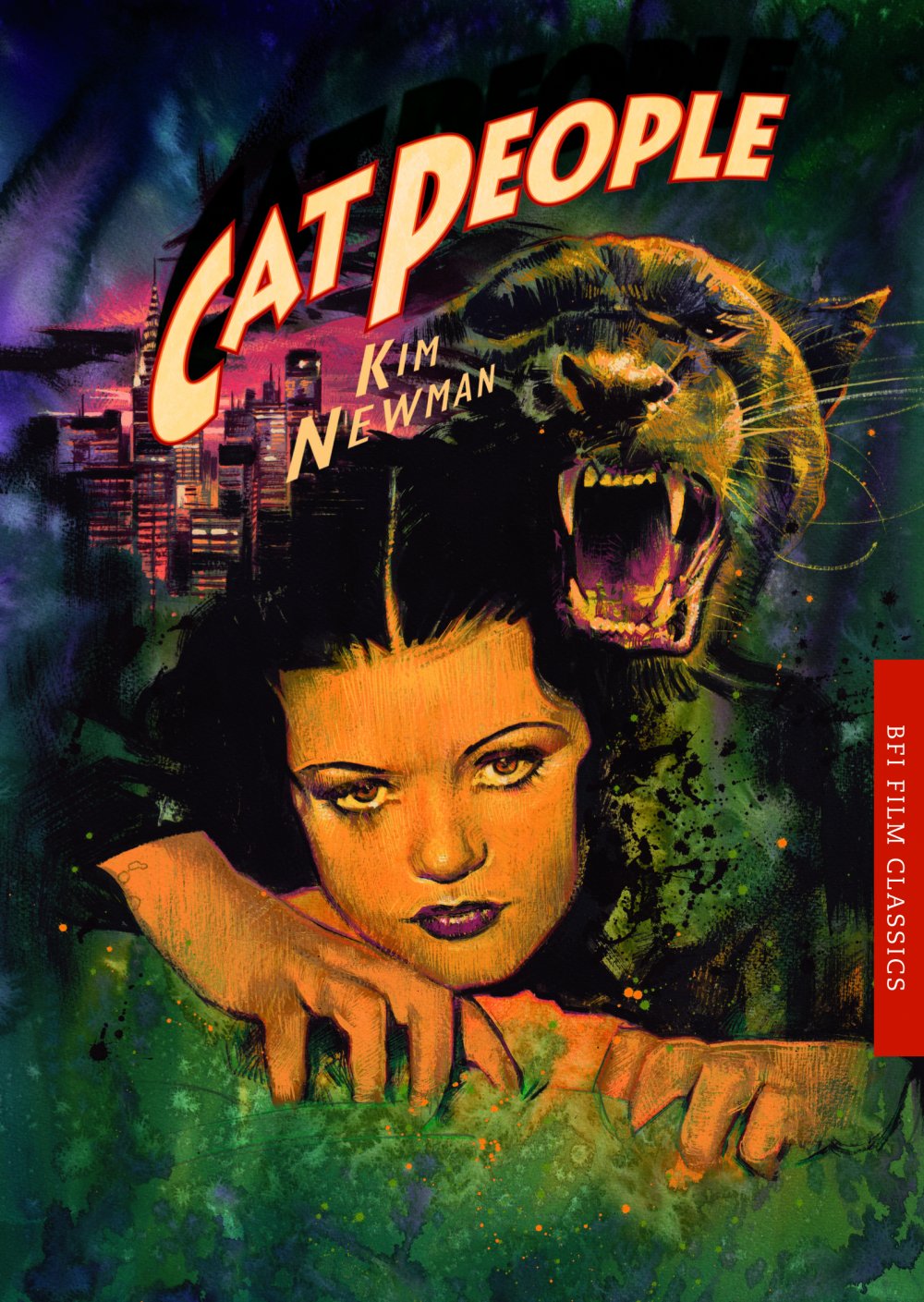 Cat People (1942) is a beautifully subtle film, which seems to invite layers of interpretation. It was my decision to concentrate on a portrait of Simone Simon and contrast the sultry, relaxed face with the unleashed fury of the roaring panther.

The New York setting ensured that this was a very urban tale of human desire, rather than the wilds of a jungle – the composition was intended to be claustrophobic, in order to suggest the thematic ‘caged passion’, though the colouring feels quite tropical.

The illustration is rendered in gouache on a watercolour surface. This is my preferred medium and employs techniques I’ve refined over the years, however, it also allows for a certain amount of unpredictability in the marks and textures. Perfect for the undercurrent of wild, animal instinct!

Films have always been a rich source of inspiration for me, though watching them on TV as a child soon gave way to a preference for the horror genre: the Universal monster films, Hammer horror and Roger Corman’s Poe adaptations. My tastes have since expanded vastly, but I still have my first loves! 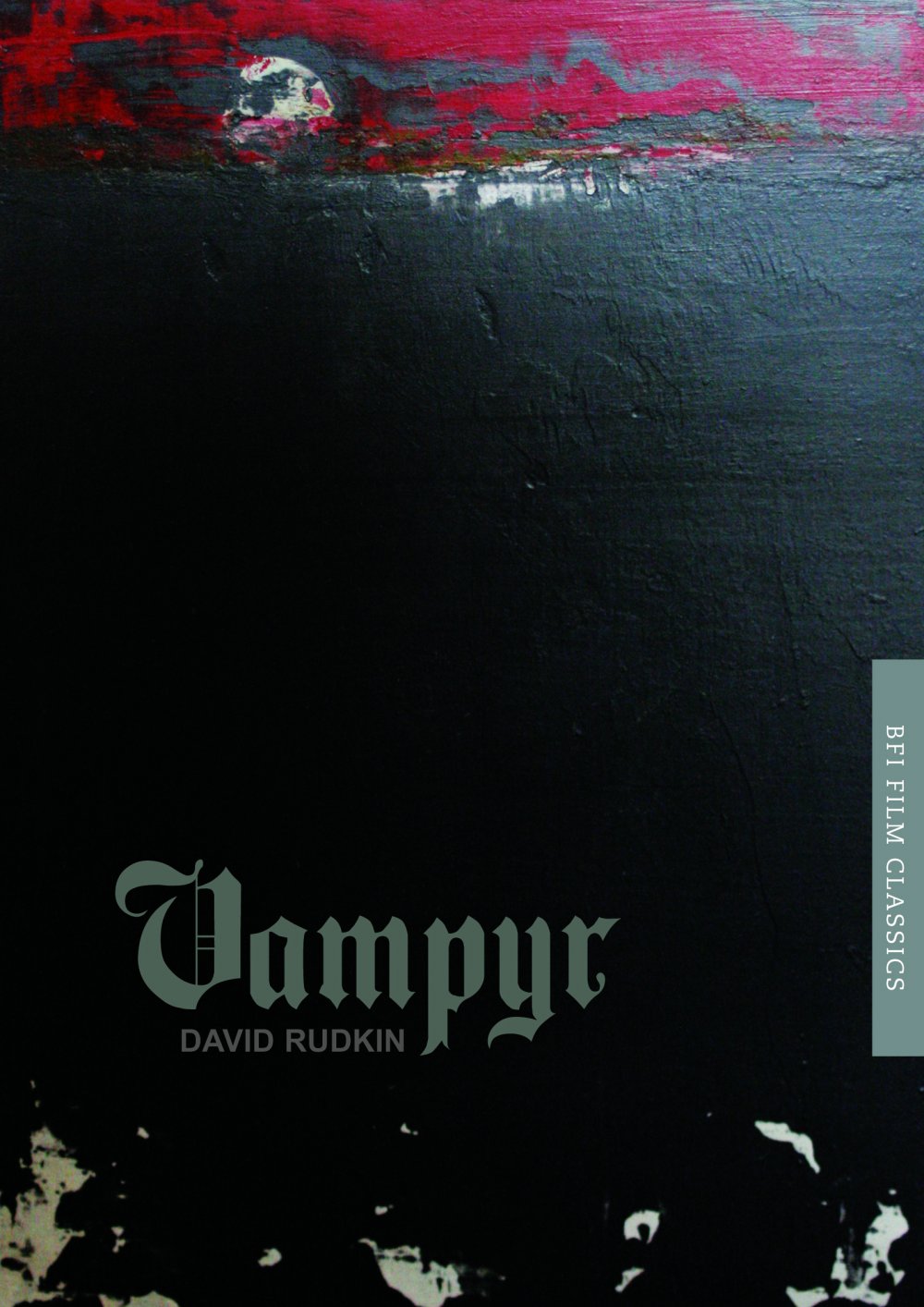 When I was asked to submit artwork for Vampyr (1932), I viewed Carl Theodor Dreyer’s work and had a look at David Rudkin’s critique of the film.

I suppose the most appealing thing about Vampyr for me was its crushing, oppressive atmosphere, which does still hold up in the 21st century. My paintings have, on occasion, been described as ‘dark’, ‘sinister’ and ‘disquieting’, and it’s these feelings that I tried to convey in the artwork.

Being a painter who hovers between abstraction and figuration, I played down narrative and tried to deliver a feeling of the film through colour, texture and form. The only recognisable motifs are, I suppose, a moon and a red sky.

Through a process of layering and scraping back fairly heavily-applied paint and other materials, a work is slowly coaxed into being. I like to describe my methods as experimental rather than intuitive. A process of adjustment of form, line, colour and composition proceeds until I feel the piece is resolved – during this period it’s quite easy to lose a work which was almost there.

The materiality of the paintings increases their imaginary potential and gives them a concentrated presence. I think of them as psychic landscapes.

My earliest film memory was watching Frank Capra’s It’s a Wonderful Life (1946) very close to Christmas when I was six or seven. I was enthralled by the magic of it. Interestingly, some scenes appeared, to me, to be in colour. Subsequent viewings through the years brought out the toxic atmosphere of small town life though. The writer Richard Cohen called it “the most terrifying Hollywood film ever made”.