A celebration of Anna May Wong in six films

She blazed a path for Chinese actresses in Hollywood and Europe in the silent and early sound era, yet Anna May Wong’s extraordinary legacy has only recently begun to get its dues. On the anniversary of her birth, we cast our eyes back over six films that characterise her career. 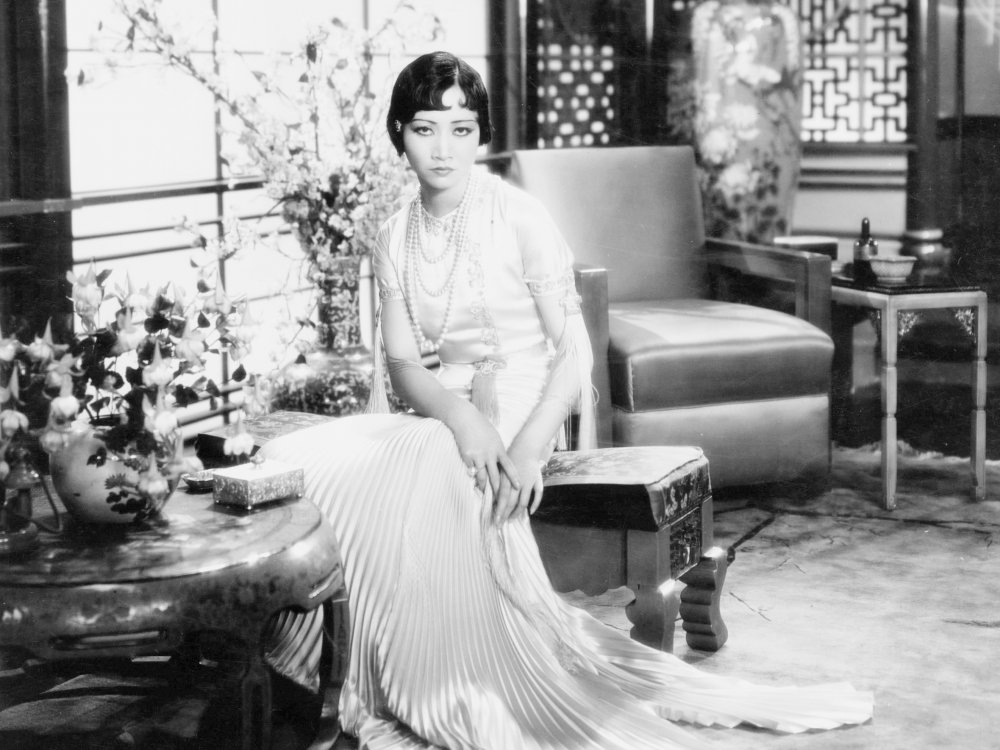 Born Wong Liu Tsong above her father’s laundry in Los Angeles’ Chinatown on 3 January 1905, Anna May Wong was not only Hollywood’s first Chinese-American star, she was an international one too, with productions in Germany and Britain constructed around her scene-stealing screen persona. She was also the first Asian-American to star in her own television series, playing the art dealer and amateur sleuth of The Gallery of Madame Liu-Tsong (1951).

Wong’s upbringing coincided with the emergence of Hollywood as America’s movie production centre. An inquisitive observer of the location shoots that regularly took place in the environs of her home, she was soon craving her own place in the limelight. Not long after appearing as an uncredited extra in The Red Lantern (1919), a vehicle for the Russian-born silent star Alla Nazimova set during the Boxer Rebellion, she realised her ambition when she was cast as the female lead in The Toll of the Sea (1922).

The parts she was assigned, nevertheless, were compromised by the racial politics of the age. She was the victim of America’s strict miscegenation laws that barred even the vaguest suggestion of interracial intimacy from the screens, and of the draconian Chinese Exclusion Act of 1882, only repealed in 1943, which prohibited Chinese, even third-generation ones such as herself, from naturalising as American citizens.

After a promising start to her career, she became synonymous with the ‘Dragon Lady’ archetype, as Hollywood relegated her to playing the ‘exotic other’, whose presence alone was enough to signal a threat to white patriarchy and heteronormative romance. Prostitutes and femme fatales became her stock in trade in such hysterical yellow peril narratives as Streets of Shanghai (1927), Daughter of the Dragon (1931) and Limehouse Blues (1934), which regularly concluded with scenes of Wong’s demise in noble acts of self-sacrifice.

She was the actress “who died a thousand times”, as she often joked. That and the fact that she passed away alone in 1961, at the relatively young age of 56, having never married, have seen many read her life and career in terms of victimhood.

And yet Wong never seemed like a victim, maintaining a presence, poise and dignity even in her most thankless roles. Her striking beauty, emotive performances and gazelle-like grace saw her stealing the show in silents and talkies alike. 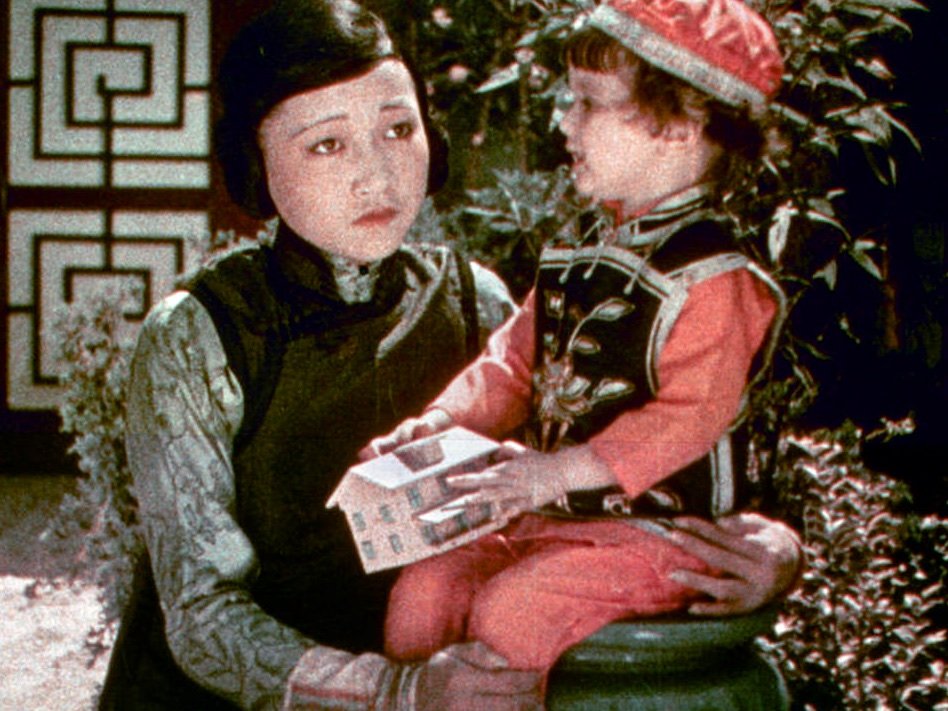 Featuring Wong’s first starring role, at the age of 17, The Toll of the Sea was also the first feature produced using the two-strip Technicolor process, although many contemporary critics dismissed the vibrant hues of its evocation of the “exotic Orient” as a novelty, instead singling out Wong’s singularly entrancing performance as the main point of interest.

The film itself is a rather antiquated version of Madame Butterfly with the action relocated from Japan to China, although it was actually shot in California. Ironically, Wong would only ever appear in one other colour feature, right at the tail end of her career, playing the old maid who lingers ominously at the sidelines in the sub-Hitchcockian murder mystery Portrait in Black (1960). The Toll of the Sea did, however, establish one particular trope, in that it culminated with the first of the literally scores of tragic death scenes that characterised her filmography. 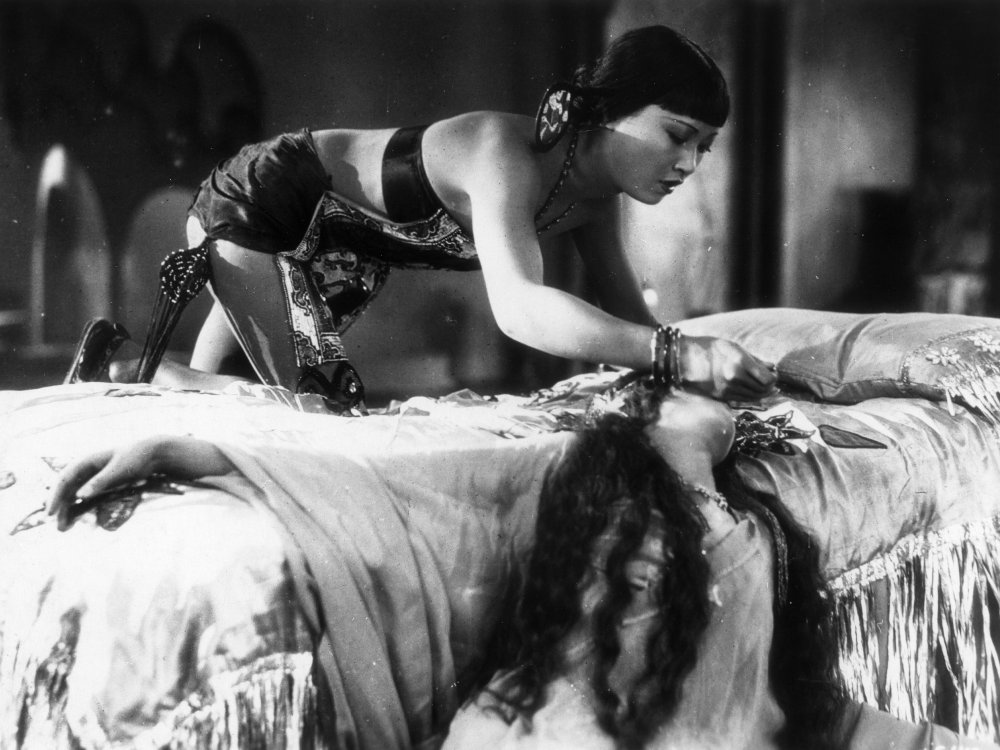 Wong’s Hollywood stardom sadly peaked too soon, with her appearance as Tiger Lily in Herbert Brenon’s surprisingly dark 1924 adaptation of J.M. Barrie’s Peter Pan and this memorably supporting part in Douglas Fairbanks’ exotic action-adventure riff on One Thousand and One Nights.

Fairbanks’ swashbuckling stunts and scenes of derring-do provide the main spectacle, but Wong’s scheming Mongol slave girl was singled out for attention, in no small measure due to the revealing two-piece in which she spent much of her time on screen. 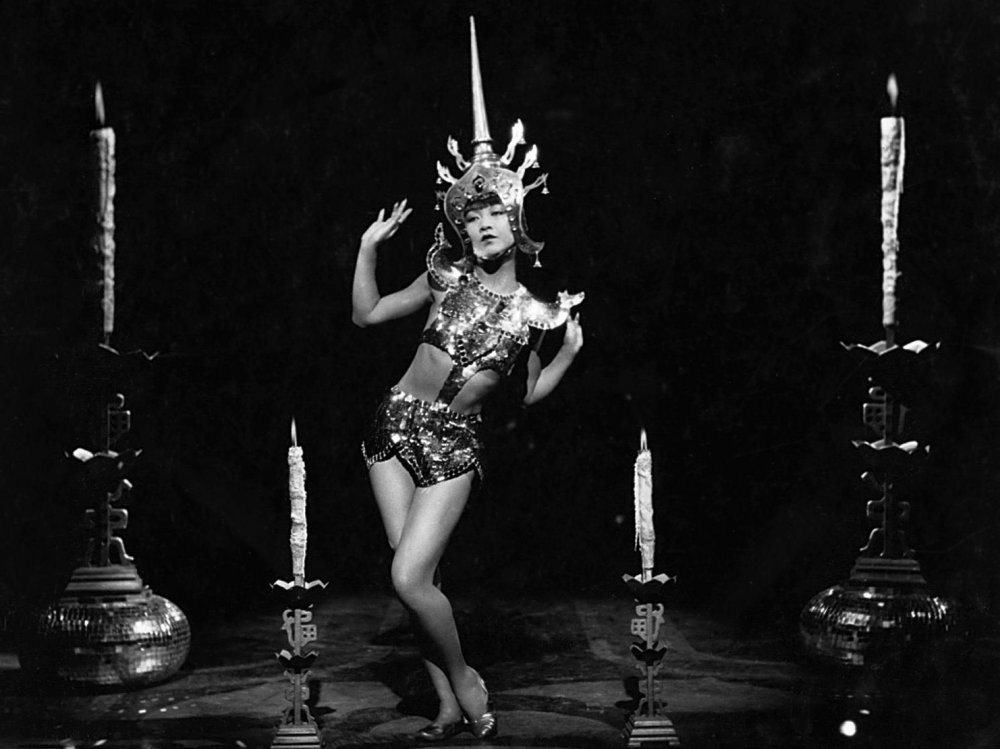 Tired of Hollywood typecasting, Wong travelled to Europe, a decision that yielded three of her most satisfying films, all constructed to capitalise on her Hollywood stardom. The German productions Song (1928) and Pavement Butterfly (1929), both directed by Richard Eichberg, paved the way for the best known, British International Pictures’ Piccadilly (directed by another German, E.A. Dupont). Here she plays a scullery maid from London’s Limehouse district whose sensuous dance routine sees her groomed as the star attraction of a glitzy West End nightclub by its debonair owner, with fatal results.

It was her last silent film, with Eichberg returning to direct The Flame of Love (1930), a British-German-French co-production about a doomed love affair between a dancing girl and an aristocrat’s vassal in pre-revolutionary Russia, which was made in three separate versions localised for each market, before the talkies put paid to this short-lived era of European collaboration. 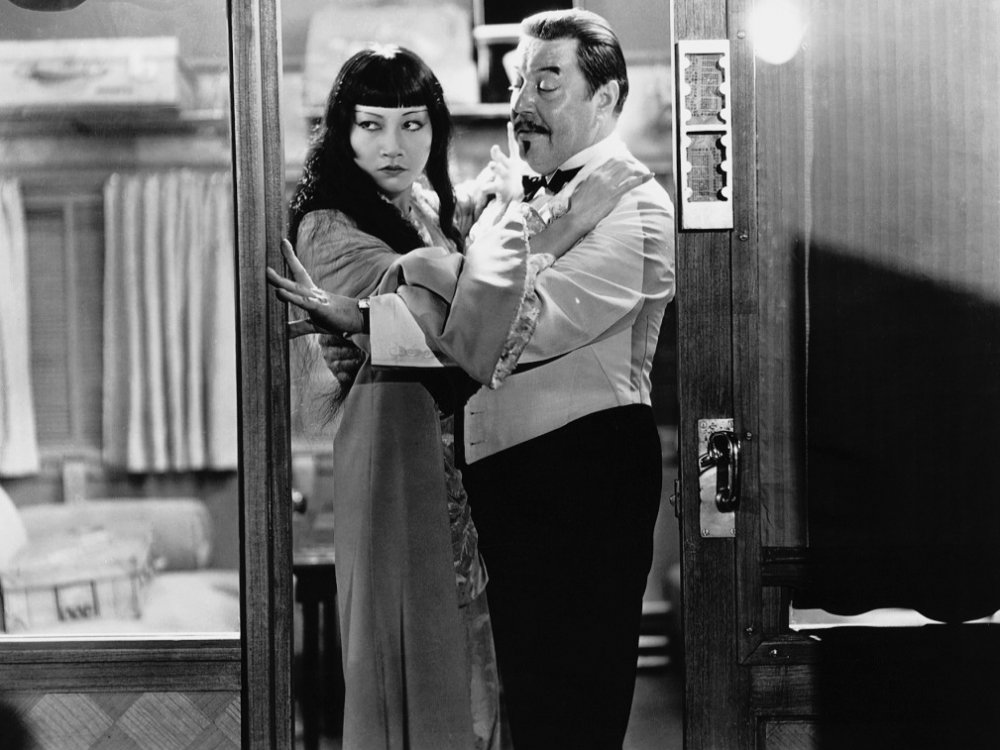 The most famous of Wong’s films saw her standing shoulder-to-shoulder alongside the top-billed Marlene Dietrich as one of a pair of good-time girls, or ‘coasters’ (“women who live by their wits along the China coast”), travelling on the titular express from Beijing to Shanghai through a civil-war stricken nation. Among the motley international assemblage of fellow passengers is Hollywood’s most famous ‘Chinese’ star of the age, Swedish-born Warner Oland (of Charlie Chan and Fu Manchu notoriety), playing the sadistic mixed-race warlord responsible for such lines as “You are in China now, where time and life have no value.”

Needless to say, cast and crew went nowhere near the country for the production. Hollywood’s highest-grosser of 1932 caused a significant diplomatic scandal, with Wong publicly denounced by the Chinese media for bringing shame upon her race. It wasn’t screened in China until 2015. 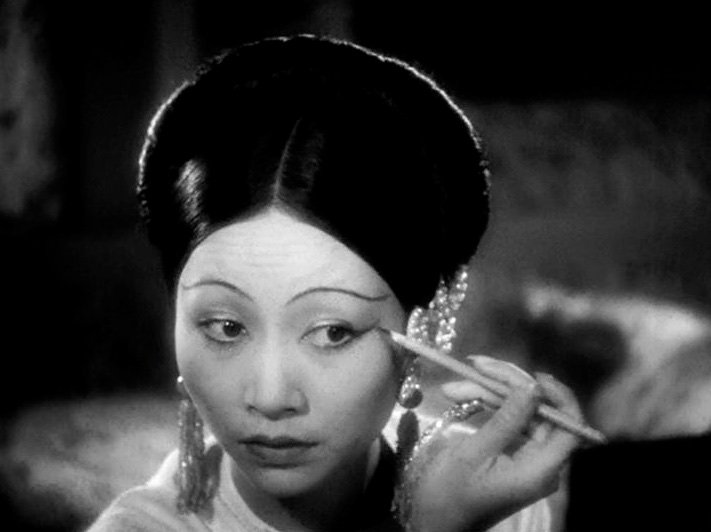 Wong returned to Britain to make three sound films in 1934. By far the most entertaining is this heady brew of buttoned-up passions, family feuds, opium addiction and racial miscegenation set in 19th-century Bristol, co-directed by an uncredited Thorold Dickinson.

The favoured son of a wealthy shipping dynasty severely rocks the boat when he returns after a year at sea to his mortified family with his new ‘heathen’ bride Taou Yuen, full of strange customs and wise epithets that soon see the marriage souring.

A gripping melodrama with some wonderful dialogue, its regressive message nonetheless remains a firm reminder that the past is indeed a foreign country. Yet the film did provide Wong with her first on-screen kiss, and perhaps the first interracial clinch anywhere in a commercial feature. 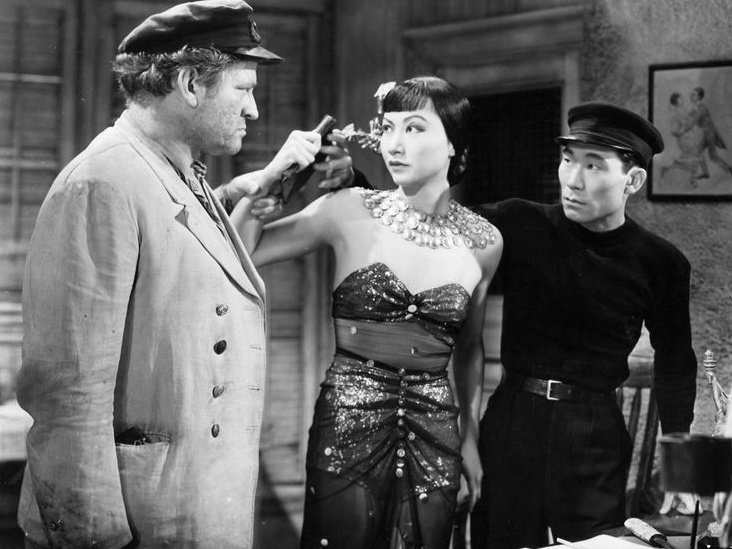 The bitterest blow of Wong’s career occurred when MGM passed over her audition for its adaption of Pearl Buck’s The Good Earth (1937), deeming the German-born Luise Rainer more capable of playing its Chinese lead more convincingly.

The actor was subsequently consigned to B-movies, of which this thriller, directed by a similarly underappreciated figure in Hollywood, the French émigré Robert Florey, is among the most interesting. The title promises another dark Limehouse tale of Oriental perfidy in the vein of Sax Rohmer, but the narrative is actually much more progressive as, prompted by the murder of her father, Wong heads from Los Angeles’ Chinatown to the Caribbean to infiltrate a violent gang of human traffickers.

Daughter of Shanghai provided Wong and her Korean-American costar Philip Ahn with something Asian American actors had only ever dreamed of before: a happy ending, as the pair ride off in the back of their car into the sunset to get married.

Related to A celebration of Anna May Wong in six films