Inside Whicker’s World: The life and travels of Alan Whicker

Donated to the BFI by his partner Valerie Kleeman, these letters, passports and photos shed fascinating light on the career of pioneering travel TV presenter and investigative journalist Alan Whicker. 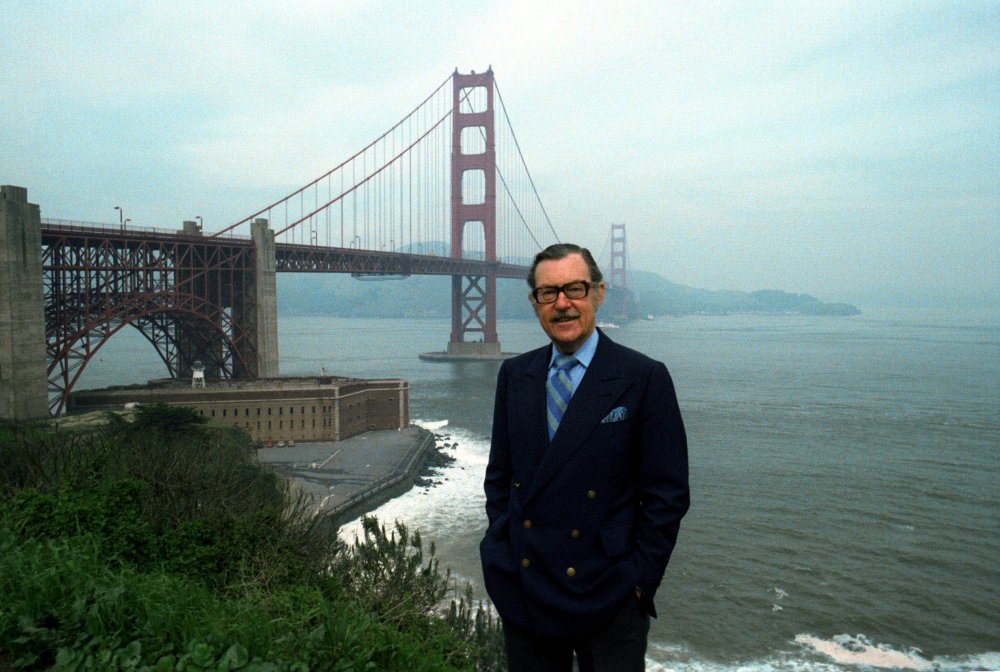 Earlier this year the papers of renowned journalist, broadcaster and television presenter Alan Whicker were generously donated to the BFI National Archive by his partner Valerie Kleeman. Whicker’s World, first broadcast as a slot on the BBC’s Tonight programme in the late 1950s, made Whicker a household name. For more than 40 years Whicker travelled the world, reporting on all aspects of 20th-century history, politics and culture. His archive gives an insider’s view of some of the key events, social trends and personalities of the time, while documenting the changing world of television reportage across the decades.

The archive had been meticulously kept in Whicker’s Jersey home and spans the years 1938-2014. It includes a school report from 1938, documents relating to his war career and letters, photographs, extensive production files, audience reports, interview notes and questions (including Whicker’s hand-annotated question cards), plus transcripts of every TV programme he made.

The Foundation enlisted an archivist, Catherine Kirby, to help ready the papers for transfer to the BFI (you can watch them arriving at their new home at the BFI National Archive here) and we are now working towards making them available for research.

As the first step along this journey, a small selection of letters, papers and photographs from the Whicker archive are currently on display at BFI Southbank, as part of a wider exhibition of recent BFI acquisitions (the other archives showcased are those of Ealing advertising director S. John Woods and costume designer Jenny Beavan.

During the Second World War, Alan Whicker joined the Army Film and Photographic Unit, and by the 1950s he was working as a foreign correspondent for a Fleet Street news agency. He was sent to Korea as a war correspondent, where he was mistakenly reported dead. He cabled back to his office ‘UNKILLED UNINJURED ONPRESSING’

In 1957, while working as broadcaster for the BBC, Whicker was recruited by producer Alasdair Milne and Donald Baverstock to join the newly-launched Tonight programme. Whicker’s reportage gave audiences the opportunity to travel to far-flung places and these self-contained segments of the Tonight programme formed the basis for Whicker’s World, which became a fully-fledged TV series in 1965. 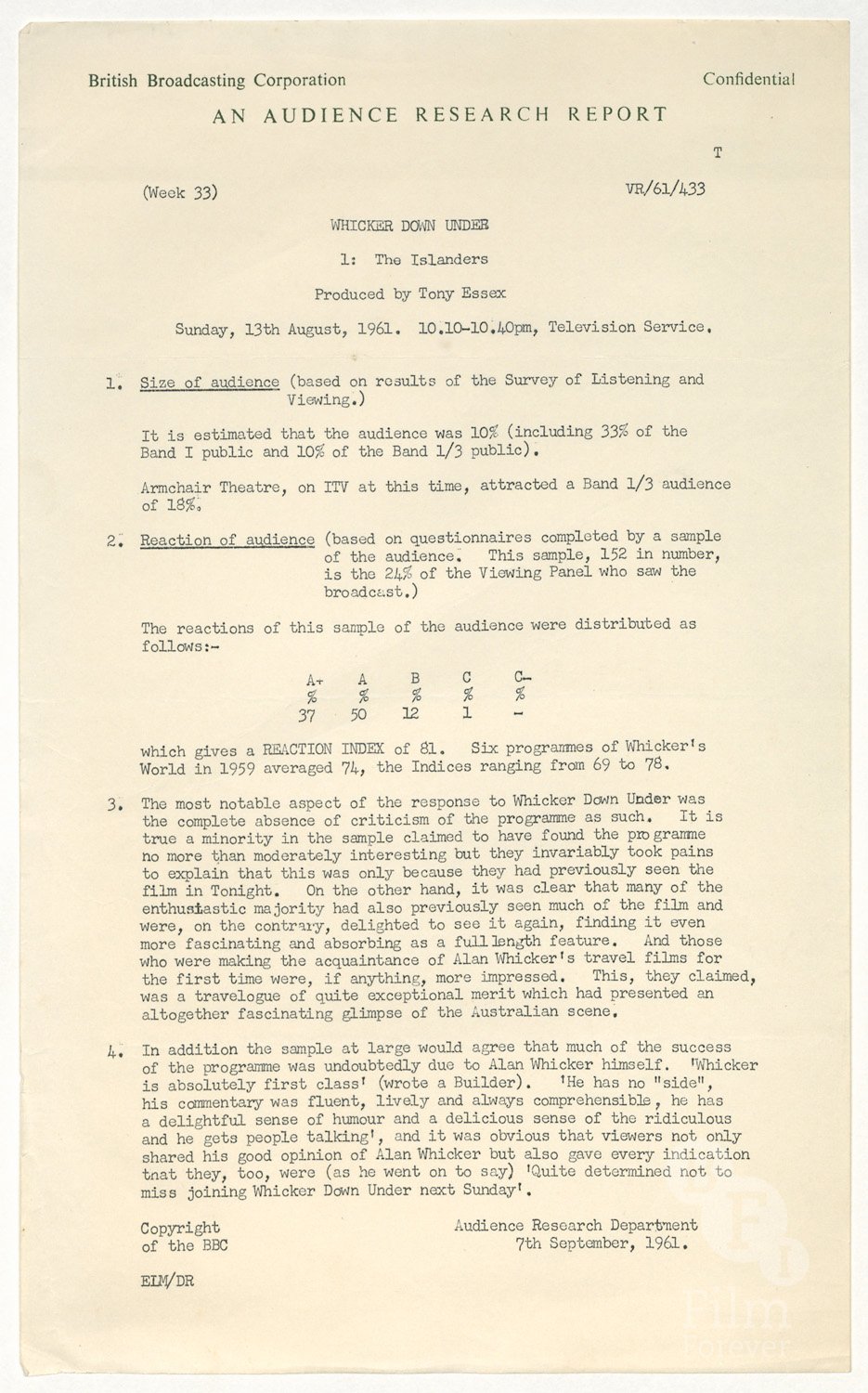 As copies of BBC Audience reports held in the Alan Whicker archive show, he proved consistently popular with viewers, and criticism was rare. Here, the BBC Audience Research Department reports that, for the group surveyed, “much of the success of the programme was undoubtedly due to Whicker himself”.

One interviewee responded: “Whicker is absolutely first class […] he has no ‘side’, his commentary was fluent, lively and always comprehensible, he has a delightful sense of humour and a delicious sense of the ridiculous and he gets people talking.” 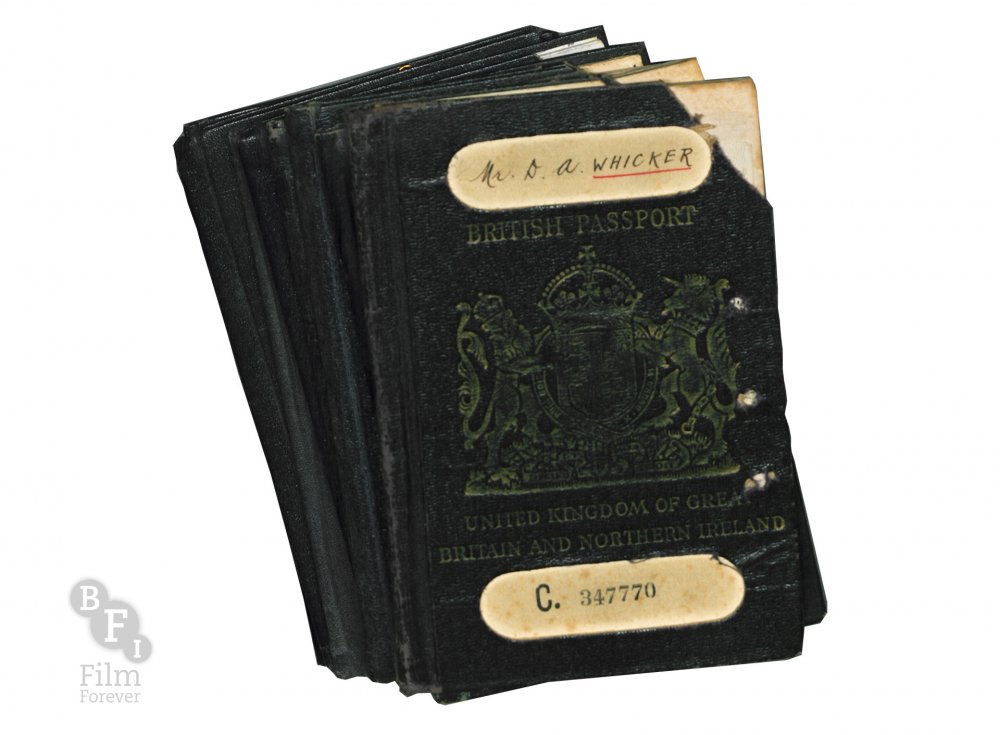 The archive includes Whicker’s British passports covering the years 1957-85. Whicker was one of television’s best-travelled journalists, as these passports, with their many visa, entry and exit stamps attest.

The archive is full of research and correspondence relating to the making of Whicker’s programmes. In 1967 the Whicker’s World episode ‘Love Generation’ encountered caution from the BBC, who were nervous about the way the programme approached issues such as the taking of LSD.

Writing from Singapore (where he was busy shooting another programme), Whicker defended ‘Love Generation’ and what he felt was an overly timid attitude on the part of the BBC. In this letter, David Attenborough, then controller of BBC2, carefully explains the concerns that were felt – primarily that the programme was not balanced enough in the way it depicted the taking of an illegal drug. Additional commentary drawing attention to the dangers of LSD was added before the programme was broadcast.

Whicker’s World reported on a wide range of topics spanning many aspects of twentieth century culture and politics. In 1967 Whicker visited the set of the new James Bond film You Only Live Twice (1967), interviewing producers Harry Saltzman and Cubby Broccoli as well as star Sean Connery. His interview questions, set out on pink index cards, ask producer Saltzman questions such as “what will this [film] cost, and how much will it make?” and how do he and Broccoli divide responsibilities. This shooting schedule reveals a busy few days filming at London airport (Heathrow), the Dorchester, Pinewood and Cubby Broccoli’s Mayfair home.

Shortly after this, Whicker moved to Yorkshire Television and in 1968 faced one of his most challenging interviewees to date, the Haitian dictator François ‘Papa Doc’ Duvalier. Duvalier came to power in 1957 and declared himself ‘President for Life’ in 1964. He was ruthless towards any opposition to his regime and thousands were imprisoned, tortured and killed during his reign. Whicker managed to gain extensive access to Duvalier for the programme, carefully posing tough questions in his typically disarming and courteous manner. 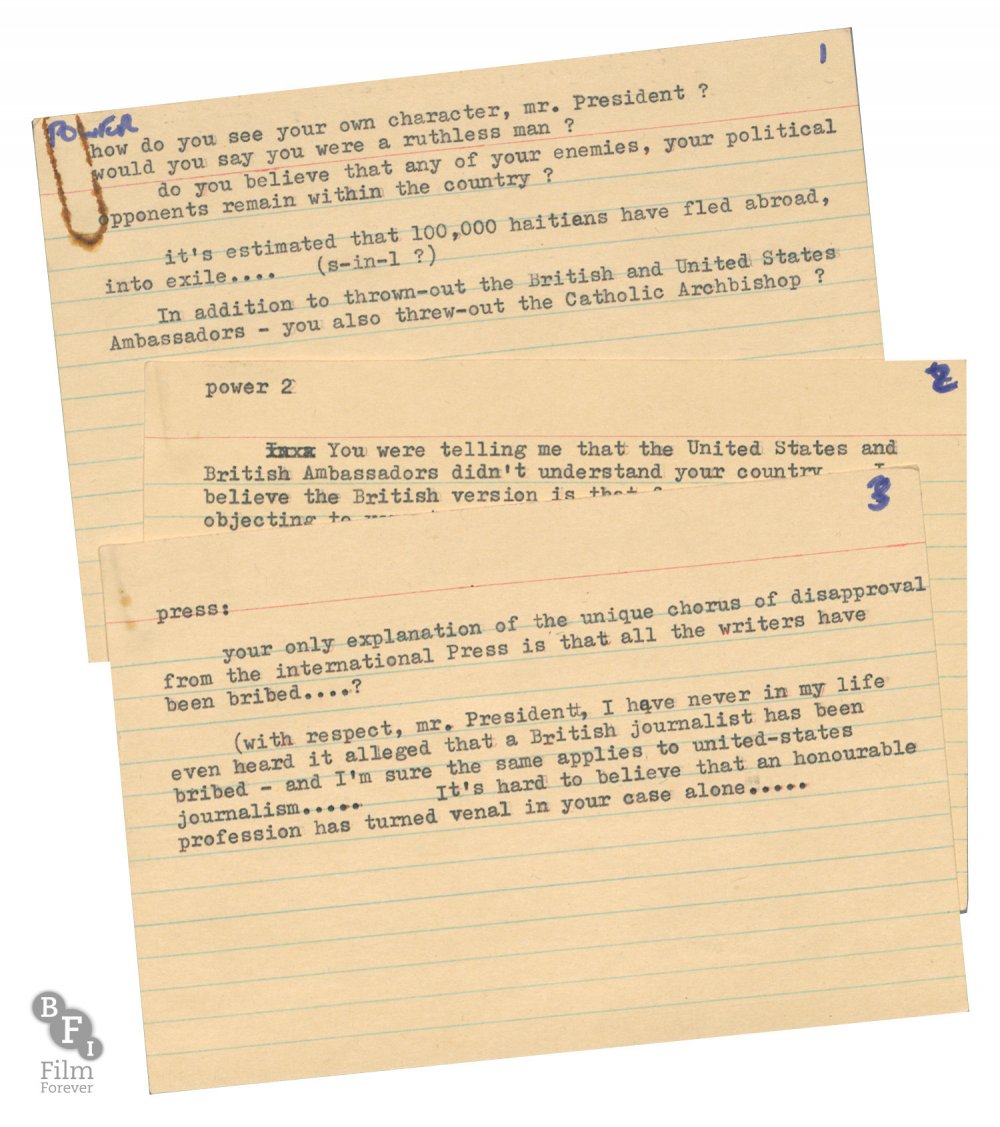 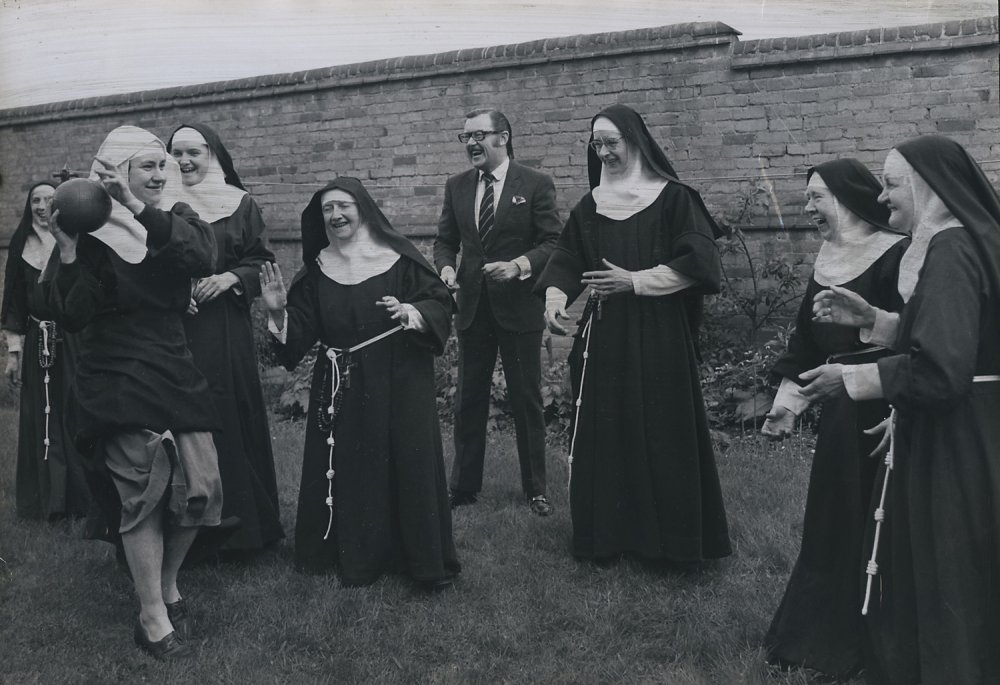 Whicker counted the Poor Clare nuns among his favourite interviewees. The nuns were only allowed to speak for two short periods each week. Whicker told a Radio Times interviewer in 2013: “I was enraptured by them all, and that moment when Sister Gertrude says, ‘Oh I do like to talk’ is enough to make you weep.” He discovered their lively spirits and sense of fun during a game of football.

Whicker maintained an incredibly busy shooting schedule across the 40 years of Whicker’s World and beyond. He became something of an icon, instantly recognisable in his glasses, Gucci tie and blazer. In 1972 he was parodied by Monty Python with Whicker Island (the ultimate accolade – Whicker loved it) and in the 1980s he became the face of Barclaycard. For Whicker’s World he travelled to (for Brits) far-flung places such as the South Pacific, South Africa, Hong Kong, India and Australia. He officially retired from full-time broadcasting in 1997, but this consummate professional found it hard to stop working. 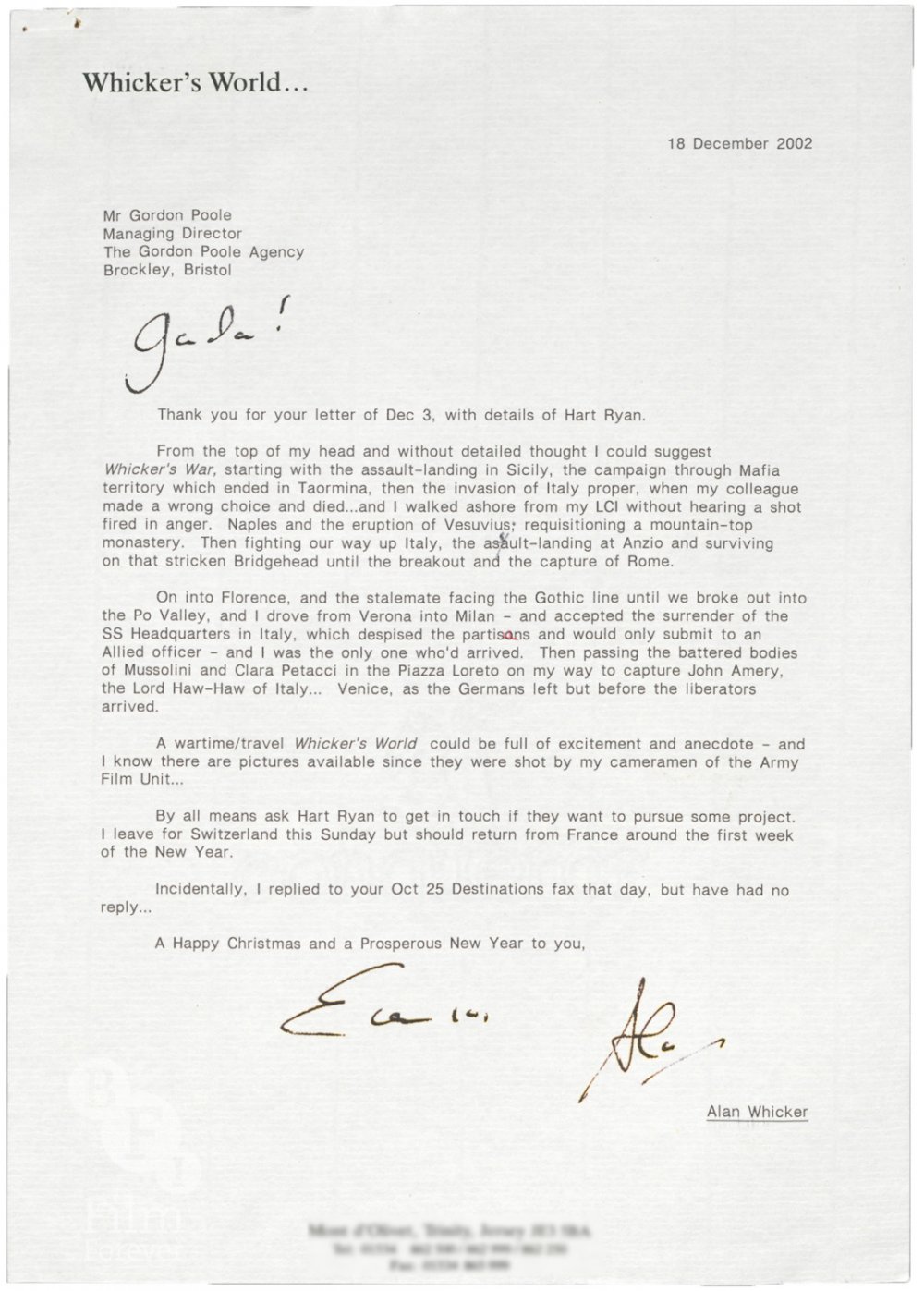 Whicker’s War saw Alan Whicker retrace his wartime route from Sicily up along the length of Italy. During this time (1943-45), his division of the Army Film and Photographic Unit shot half a million feet of film and took 200,000 still photographs as part of their efforts to record the Allies’ Italian campaign. 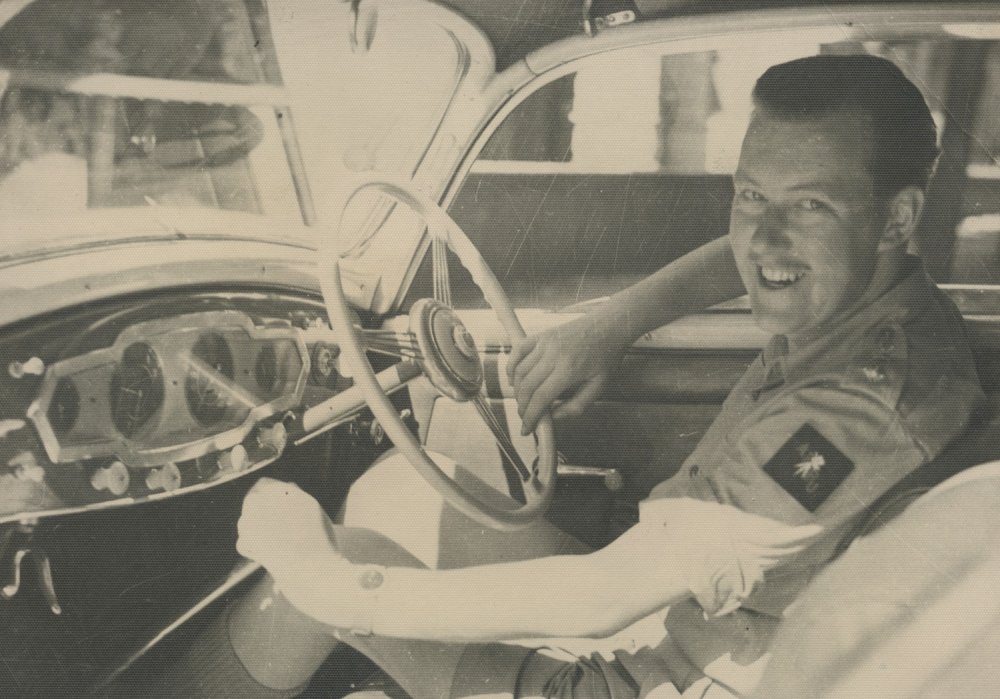 His return to the screen was one of the biggest successes of his career. Reviewers found his style as assured and compelling as ever, with one describing him as “one of the outstanding broadcasters of the age and a reporter of notable gifts […] even his pauses are eloquent”.