When a mysterious film can labelled ‘Evidence (1935)’ showed up at the BFI, our investigation led to a remarkable discovery in legal history, centred on the Derbyshire market town of Chesterfield.

This archival detective story involves a police photographer, a posse of street-betters, a lenient magistrate and a troop of circus elephants… But it’s a story that changed the course of British legal history – and film history too.

Some years ago, while preparing an inventory of the BFI’s government-sponsored non-fiction titles, I discovered a film can intriguingly labelled ‘Evidence (1935)’. It had been sent to the archive as part of a film collection from the Bramshill National Police Training College, and the accompanying documentation was missing. Little did I know that the contents would yield some history-making information about the market town of Chesterfield in Derbyshire and its pioneering role in the history of the way evidence is used in British courts of law.

This original 16mm black-and-white reversal camera positive is in fair condition but includes some shaky camerawork that makes clear its far from professional production. On a few frames the emulsion has become detached from the base. On first inspection the film’s significance was tantalisingly elusive. It consists largely of shots of clusters of flat-capped men whiling away the hours in and around an unidentified marketplace. Towards the end there’s a flurry of activity as many of the unsuspecting men are rounded up by what appear to be plain-clothes policemen and shoved into the back of a Black Maria. 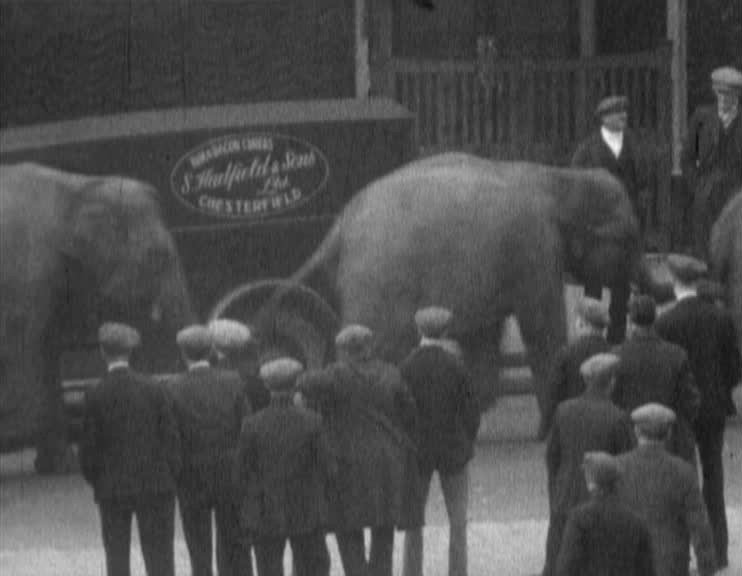 Just to compound the enigma, about a third of the way through the film, a troop of elephants passes through the marketplace. When I rewound this section (to double check that I had really seen this fleeting apparition!) I found my first clue to the film’s provenance. The word ‘Chesterfield’ is written on a sign on a van parked behind the elephants. 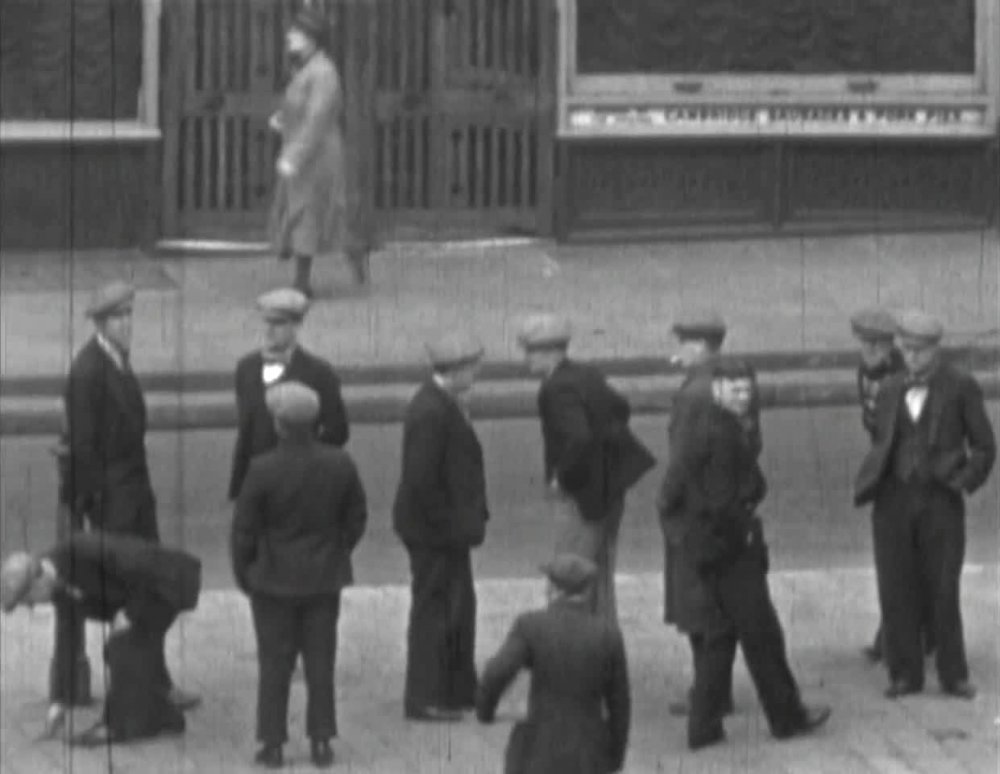 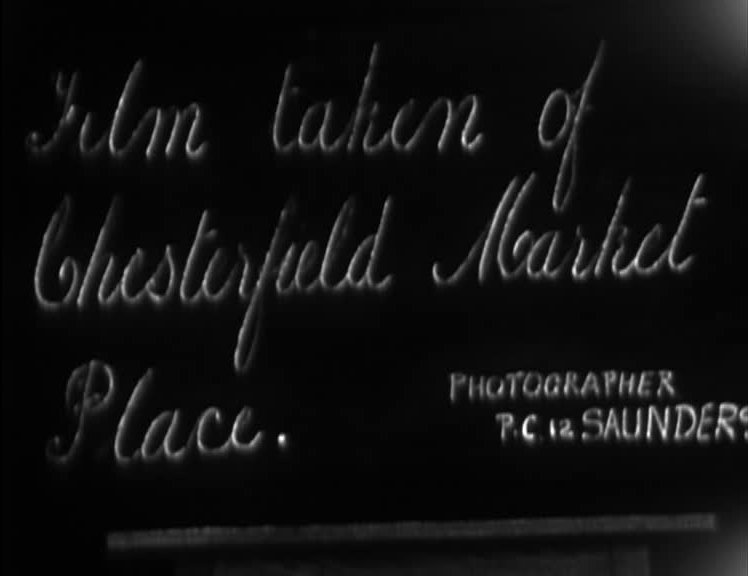 I hot-footed it to the British Library where I spent a morning researching 1935 editions of The Derbyshire Times. When I got to Friday 17 May, my labour was rewarded with an astonishing double-page spread. It described in great detail the dramatic atmosphere in Chesterfield Police Court on 13 May 1935. The court had been “temporarily turned into a cinema”, said the report, for the trial of 39 defendants accused of illegal street betting. It went on to describe how PC Saunders of Chesterfield Borough Police captured their shenanigans from a first floor shop window overlooking the marketplace on 30 April and 1 May 1935. The article named all 39 defendants, of whom 25 were discharged, and 14 received fines between £2 and £20, or were cautioned.

This film, then, is a very early example of the use of film as surveillance and an important plot point in the fascinating story of how photographic imagery has been used in legal proceedings since the early days of daguerreotypes, through surreptitiously captured photos of suffragettes, to the HD CCTV footage routinely admitted as evidence today. Before this discovery, a 1938 film of street betters in Bradford had been the earliest cited example of a film used in evidence in a British court. We now know that following the Chesterfield case, police units in Bradford, Glasgow and Lancashire followed suit in their use of moving images.

The local press had a field day, delighting in the novelty value of the makeshift courtroom cinema and in the defendants’ heckling: “Now for the Mickey Mouse!”, “Where’s Mae West?” and “Were you in the ninepenny or the fourpenny seats?” 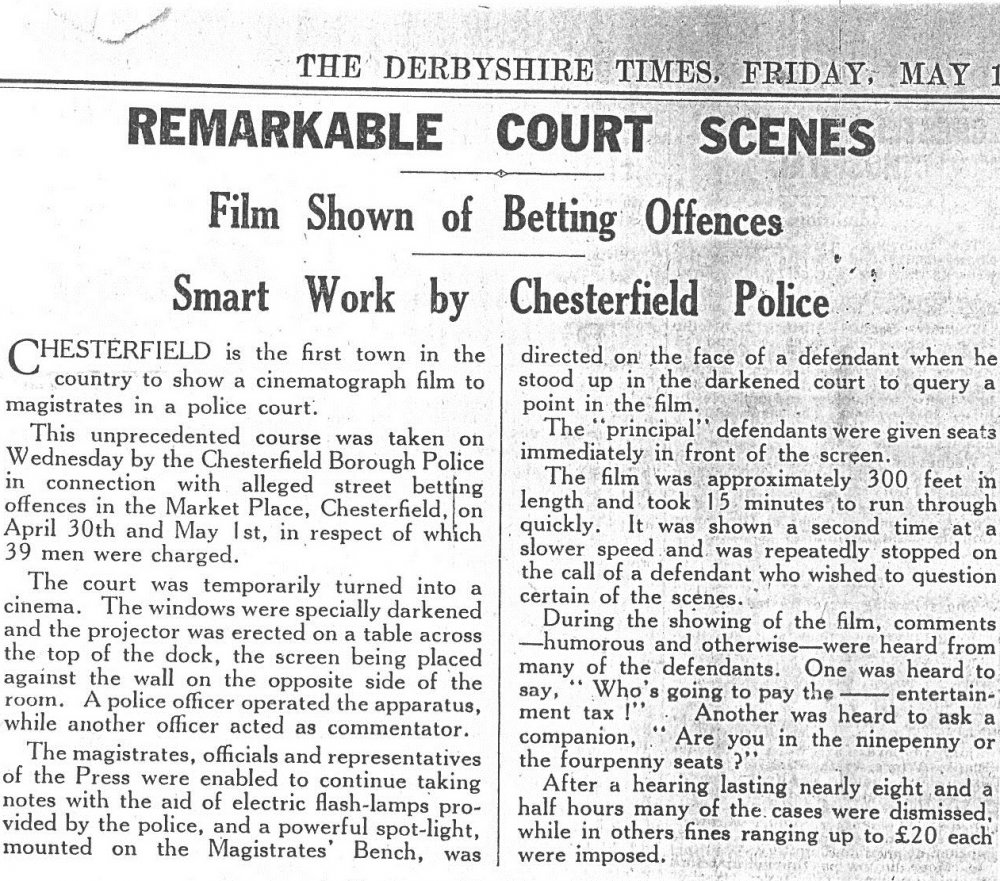 Even the trade press picked up on the event. A tongue-in-cheek letter by a reviewer for Today’s Cinema congratulated the Derbyshire police for their filmic enterprise: “Our industry seems to be playing an increasing part not only in causing crime… but in preventing it… Some time ago, we seem to remember a film camera being set as a trap to catch an alleged fowl thief. But you seem to have done the thing in style. The film, we read, lasted some 15 minutes. After the first ‘performance’ the picture was re-wound and put through again, being stopped at particular places as required by the defendants… One thing we think ought to be made clear: Was your film really non-flam? We should hate to think of so enterprising a chief constable committing an offence under the Cinematograph Act of 1909 through excess of zeal!”

As an archivist, I was curious to know whether the 16mm artefact preserved at the BFI Conservation Centre was the actual film that was projected in court. With the help of conservation specialist Angelo Lucatello, who carried out a ‘forensic’ examination of the film, we were able to ascertain that it was indeed the actual artefact projected. Several articles noted that the film was stopped during projection to allow the faces of the defendants in court to be compared with those of the perpetrators on screen, and this correlated with the physical state of those sections of the film – visible emulsion damage was caused by the heat of the projector bulb when the film was stopped. The Derbyshire Times article even accounted for the (almost) subliminal shot of the elephants: “three elephants, who were performing at a circus in the town, ambled slowly across the screen.” 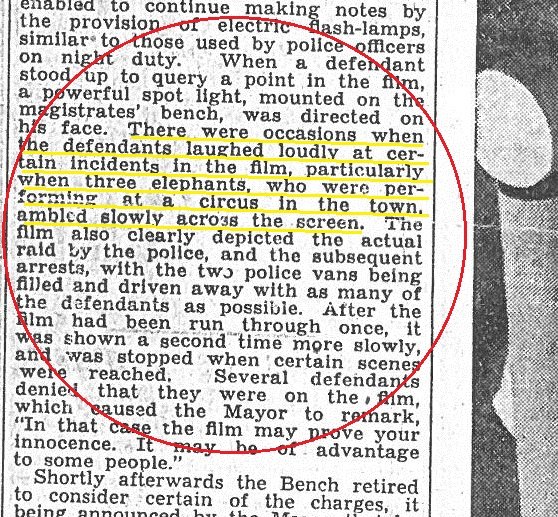 Detail of an article in The Derbyshire Times

The article concluded with a statement made by the chief magistrate, Mr Alderman H. Varley, which beautifully encapsulates the mood of the day: “It has to be said that on occasions the law is an ass, and in regard to betting laws, the law is an ass. I can telephone a £1 bet, and I can keep within the law, but if I make a sixpenny bet in my house or in the street I am liable.” Evidence is a wonderful example of how non-fiction films born of a utilitarian purpose many decades ago can have rich resonance for audiences today. And how many betting shops now stand on these streets?