Journey deep into Tokyo’s cinematic underworld with 9 of the best Japanese mobster and yakuza movies – and a killer trilogy. 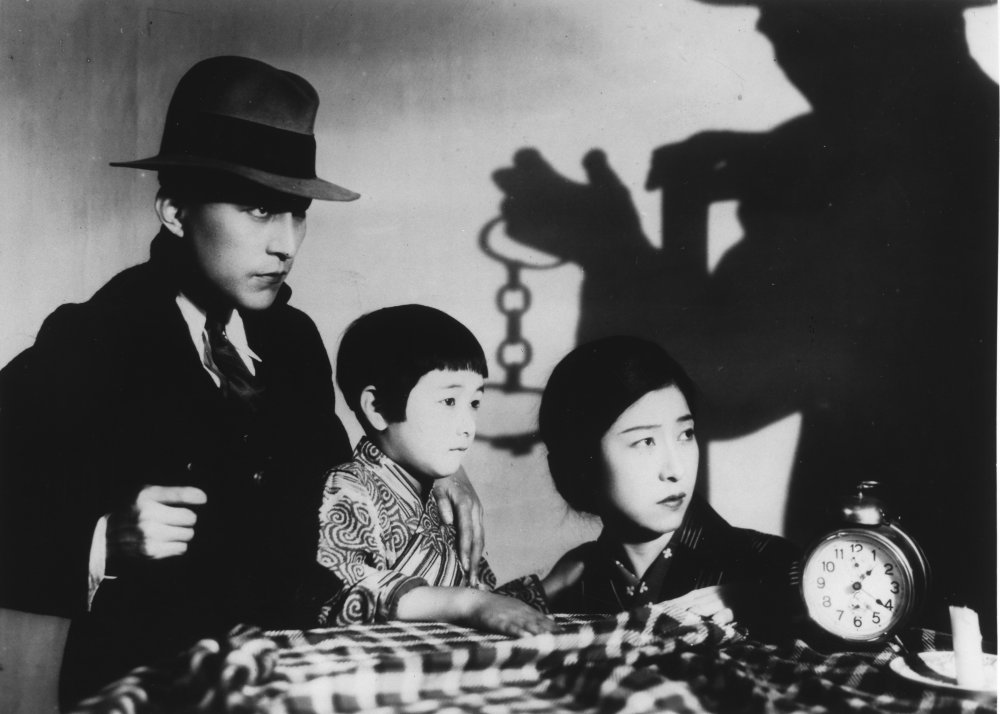 “Japan never had a Volstead Act, never submitted to Prohibition, and so the country never produced an Al Capone”, writes Tony Rayns in a booklet essay for the BFI DVD release The Ozu Collection: The Gangster Films, which includes three idiosyncratic silent works by Yasujiro Ozu from the early 1930s: Walk Cheerfully (1930), That Night’s Wife (1930) and Dragnet Girl (1933).

The country did produce a significant wealth of gangster films, however, from these curiosities by Ozu fashioned along the lines of the Hollywood underworld dramas to the explosion of titles in the 1960s and beyond featuring Japan’s home-grown crime syndicates, the yakuza, who are more prone to the use of the katana (samurai long sword) than the gun.

This list takes Ozu as its starting point in exploring one of Japan’s most enduring home-grown genres, which has gone on to follow a trajectory quite distinct from Hollywood. 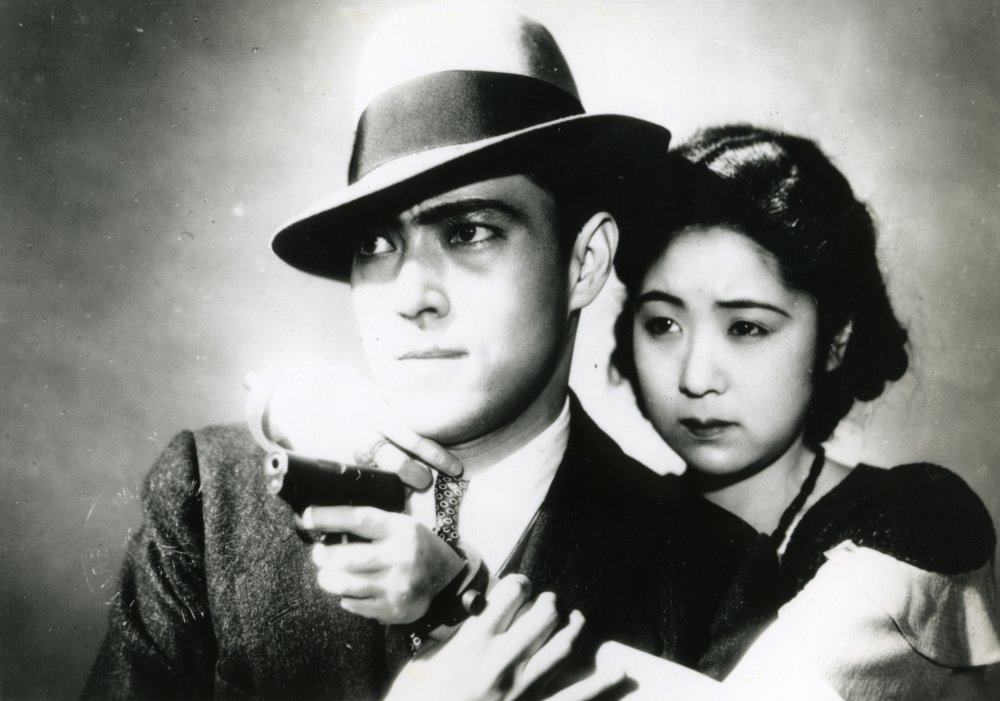 The director all too often misleadingly referred to as the most ‘Japanese’ of filmmakers never kept his love of Hollywood a secret, especially in his early works made at Shochiku’s Kamata studios. His most obvious homage to gangland Americana is, like the cosmopolitan port city of Yokohama where it is set, a fascinating example of east meets west. It’s certainly a long way away from the cosy domestic dramas of the postwar era for which he is best remembered, although certain elements of the highly distinctive Ozu style are already beginning to emerge.

Kinuyo Tanaka plays the central role of Tokiko, whose respectable daytime employment in an office typing pool subsidises the lifestyle of the low-rent lawbreaker and former boxing champ Hiroshi (Hideo Mitsui) to whom she plays moll. Together they reign over a smoky demimonde of American-styled cocktail bars and sweaty boxing gyms, expunged of almost every Japanese element save for its actors’ faces, before Hiroshi’s eye begins to rove to the more traditional younger sister of one of his new hoods.

You can’t really go wrong with any of Seijun Suzuki’s exuberantly quirky pop art confections, although the director best known for his dreamlike hardboiled hitman flick Branded to Kill (1967) actually made very few ‘true’ gangster films during his tenure at Nikkatsu studios. Those that he did deviated wildly from the ninkyo eiga (‘chivalry film’) template of rival Toei Studios, and in fact from generic standards practiced anywhere in the world.

Youth of the Beast – his tale of a mysterious loner (played by the legendary Jo Shishido, who attributed his box-office allure to his extraordinary, collagen-enhanced cheekbones) who infiltrates a Tokyo gang and begins playing it off against a rival mob – is constructed in a typically flamboyant and unorthodox style.

Sandstorms rage outside plate-glass windows, dialogue scenes are filmed perplexingly from beneath glass floors, and the story unfolds in Nikkatsu’s trademark mukokuseki (‘borderless’) cinematic world. It seems even more alien and otherworldly than Ozu’s Yokohama in Dragnet Girl. This is most definitely not the Tokyo it claims to be, but where? “In my films, time and place are nonsense”, the eccentric auteur once said about his unorthodox staging and editing methods, and yet somehow it all seems to make perfect sense. 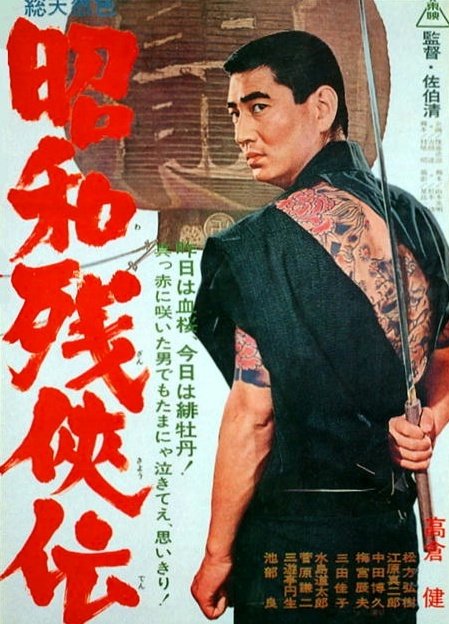 As far as endemic Japanese gangster movies went, Toei studios dominated the scene throughout the 1960s. Its numerous long-running and highly-popular ninkyo (‘chivalry’) sagas dwelt on the rituals and doctrines of gokudo (‘the extreme way’) and conflicts between the thirst for money and power and the old-school jingi gangster code of honour, with its emphasis on the concepts of giri (‘obligation to the group’) and ninjo (‘humanity or compassion’).

This first entry in a nine-film series that lasted up until 1972, also known as Tales of Showa Era Chivalry, is a great entry point to the genre. Its tale of the rise and fall of rival gangs and the power struggles of the various agents within them unfolds in small-town Japan amid the chaos of the occupation period.

Among the roster of the company’s regular players, the iconic Ken Takakura remains a towering presence. Here he appears in characteristic guise as Gennosuke, the stoic, tattooed, katana-wielding tough guy just returned from the war and eager to rebuild his country without the assistance of corrupt state officialdom. He rallies his fellow yakuza clan members together to oversee the construction of a new market place, against a backdrop of racketeering, black marketing and extortion. 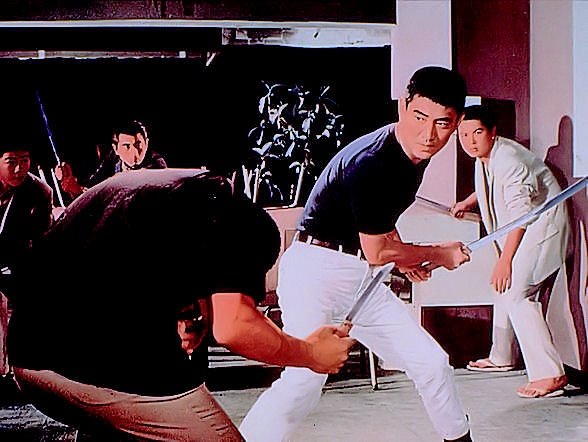 Much of Toei’s output from the 1960s has remained unreleased and unscreened overseas, which in the case of the Abashiri Prison series is a real shame. This wildly entertaining first entry is a particular gem, assembling a host of the company’s top screen mobsters within the isolated jailhouse of the title, situated in the remote far north of the icy wastelands of Hokkaido. Here they continue their gangland grudges before archrivals Tachibana (played by Ken Takakura, who also sings the theme song of the series) and Gonda (Koji Nanbara) manage to break out, still handcuffed to one another, and make their escape across the snowy wasteland.

The original 10 parts, released between 1965 and 1967, were directed entirely by Teruo Ishii, while the directors Masahiro Makino, Kiyoshi Saeki and Yasuo Furuhata took the helm for the various instalments of the eight-film New Abashiri Prison (Shin Abashiri bangaichi, 1968–1972) series. 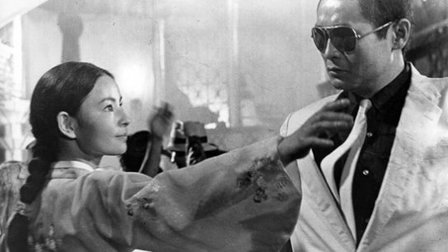 Also known as By a Man’s Face Shall You Know Him, like Brutal Tales of Chivalry, Kato’s film depicts the conflicts surrounding a small-town marketplace in the Year Zero postwar disorder of 1948, although this time the conflict is racial, as a gang of Korean mobsters try to muscle in on this crucial patch.

In order to up the ante in the veracity stakes, the Shochiku studio cast former gang boss Noboru Ando in a number of its forays into yakuza territory. Here he plays the local doctor who leads his community against the foreign interlopers. The depiction of the Korean characters (all played by Japanese actors in Korean dress) is more than a little problematic, but there’s a conciliatory note at the coda, acknowledging the discrimination faced by Korean residents over the years, and Kato brings an undeniable stylistic verve to proceedings. 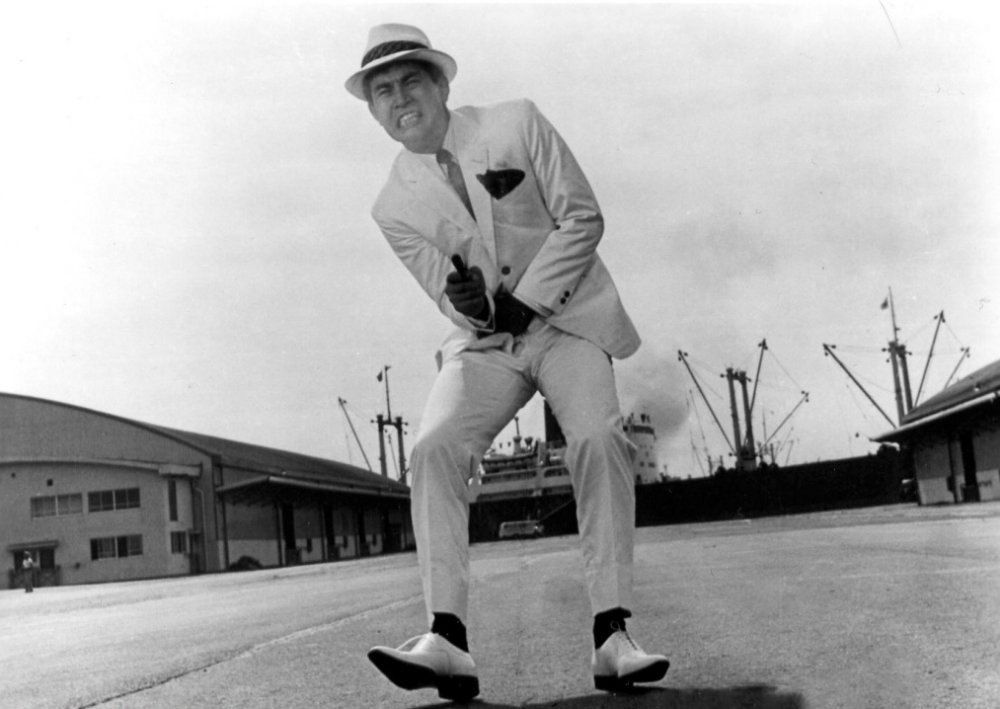 Seijun Suzuki’s films are the most visible side of Nikkatsu’s 1960s output to modern-day viewers, but it was his stablemate Toshio Masuda who was by far the most bankable of the studio’s directors, fashioning a string of popular hits starring the top box-office draw of the day, Yujiro Ishihara, from noir-ish crime drama Rusty Knife (Sabita naifu, 1958) onwards.

The similarities between the two directors are evident in this film, which shares both a Suzuki star, Tetsuya Watari, and bright and baroque art direction from Takeo Kimura. Velvet Hustler is likewise a product of the studio’s mukokuseki ethos, which drew upon foreign cinematic sources for its productions’ stories, characters, costumes and all-round iconography to create fictional filmic worlds with little visible connection with any ‘real’ Japan.

Kobe is the ostensible stage for this solidly-crafted and colourful tale of a young yakuza hitman hiding our after rubbing out a rival gang boss in Tokyo. Soon fate looks set to catch up on him, when Shishido Jo’s vengeful assassin turns up in town contracted to redress the balance. Available at one time on VHS, this vibrant exemplar of 60s pop cinema cries out for rediscovery.

Battles Without Honor and Humanity (1973)

The title says it all. With this raucous jitsuroku (‘true record’) take on a real account of the rise of rival gangs in Occupation-era Hiroshima, director Kinji Fukasaku stripped away the mythos and surface sheen of the old-school ninkyo eiga of the 1960s, and in doing so revitalised Toei’s yakuza films for a new generation in the grip of Japan’s emergent economic miracle.

The raw and chaotic form of this pioneering work and Fukasaku’s equally nihilistic follow-ups in the genre made use of a host of pseudo-documentary techniques, such as handheld cameras, freeze frames and onscreen text, to portray a dog-eat-dog world of violent, craven thugs and corrupt law enforcers. Here the traditional codes of humanity and group loyalty on which Japan’s postwar foundations were built are revealed to be a sham.

The future director of Battle Royale (2000) followed this film, also known as The Yakuza Papers, with four immediate sequels released between 1973-74, and three films in the New Battles without Honor and Humanity (Shin jingi naki tatakai, 1974-76) series, interspersed with similarly-themed works such as Graveyard of Honor (Jingi no hakaba, 1975), Cops vs. Thugs (Kenkei tai soshiki boryoku, 1975) and Yakuza Graveyard (Yakuza no hakaba: Kuchinashi no hana, 1976). 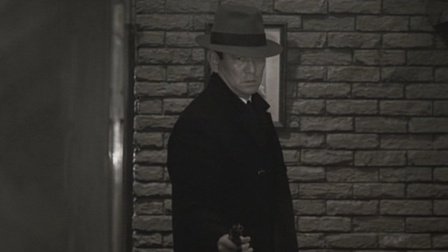 Yasuo Furuhata, the director of the final New Abashiri Prison instalment, seems to be drawn to snowbound settings. This film is no exception, bringing back the star of the original series in a self-referential role as a former gangster who retires to a small coastal village in the heart of winter to wipe the slate clean and begin a new life with his family as a fisherman. Before long, his past comes back to haunt him in the form of a heroin-addicted mobster (played by Takeshi Kitano) luring him back to his old ways.

In this rather poignant, character-driven piece, made during a lull in the popularity of the yakuza genre, Furuhata seems to be drawing a contrast between the old-school death-and-duty persona of the pre-1970s gangster that Takakura had made his stock in trade, and the cruel, coarse and avaricious new breed. The latter would come to be defined popularly by Kitano, Japan’s most popular comedian and media personality, who makes one of his earliest film appearances here. 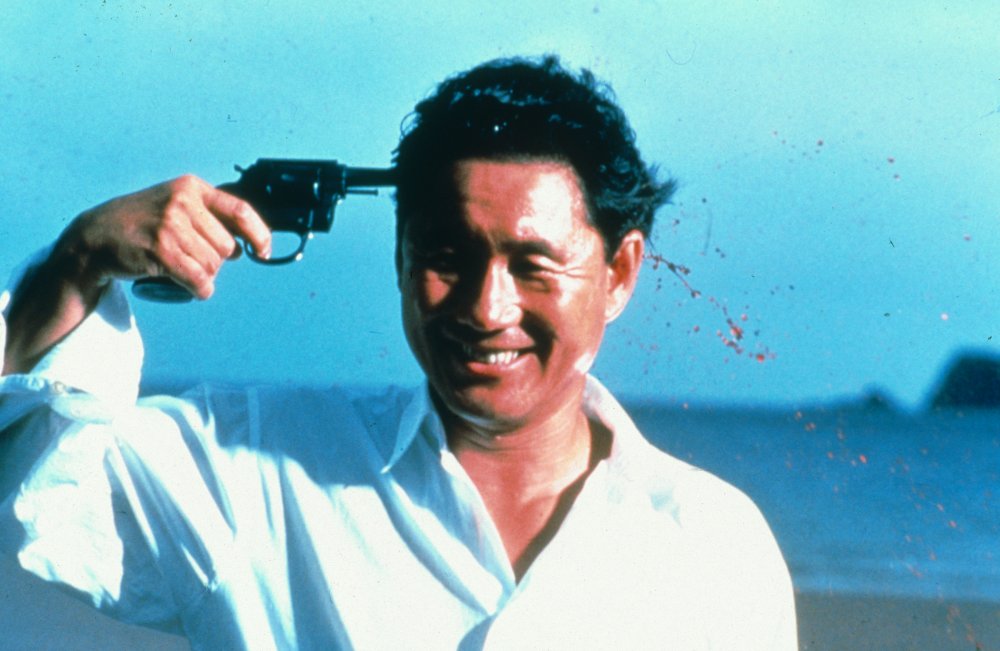 The 1990s saw several notable attempts at redefining the yakuza film for the new post-Bubble Economy era of austerity, but few were as eccentric and off-the-wall as Takeshi Kitano’s reworking of generic staples for an arthouse market.

This minimalist, near plotless existential meditation on violence and death plays out in still, static shots like Waiting for Godot on a beach, with guns and Aloha shirts, as a world-weary gangster is ordered down with his minions to a balmy island locale in Okinawa to await further orders. Passing their time playing childish games on a sunny beach, before long they realise they’ve been set up, and await a near certain death.

Sonatine was a key title in bringing the actor-director name to wider western attention; Japanese audiences, however, remained perplexed, unable to reconcile the cold-hearted, brutal killer Takeshi Kitano with his fast-talking and irreverent manzai comic alter ego, ‘Beat’ Takeshi, with whom they’d grown up over the previous decade. 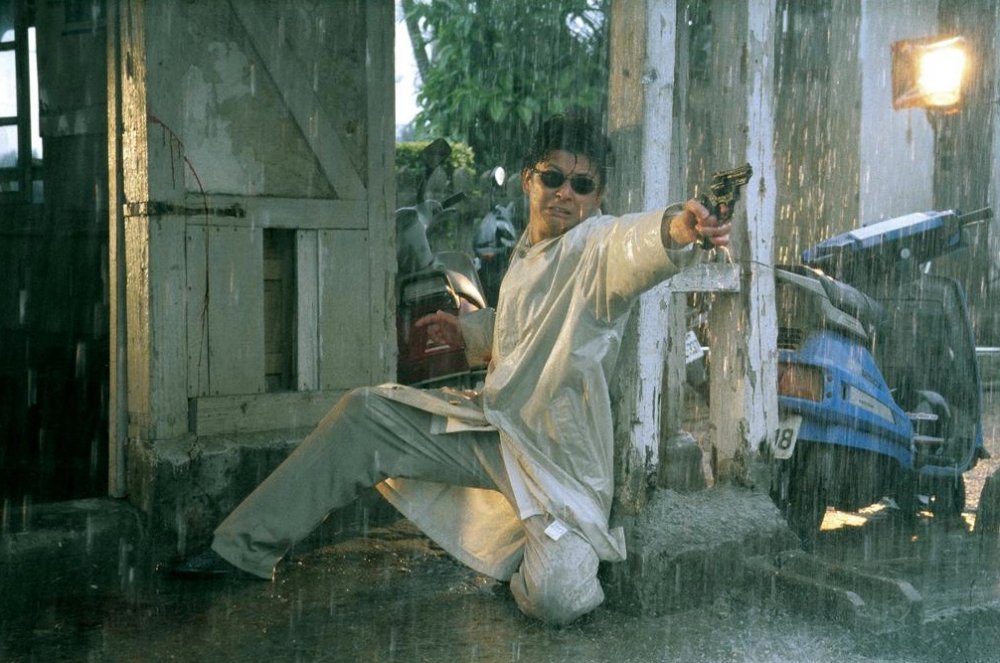 The ultra-prolific Takashi Miike has directed so many films in the yakuza genre that it is difficult to know where to begin. This loosely-linked ‘Black Society’ (kuroshakai) triptych, begun shortly after his graduation from the world of straight-to-video V-Cinema and before his international breakthrough with Audition (2000) are widely seen as among his best.

Each of the titles contain interesting observations about Asian ethnic minorities in Japan that would be a feature of much of Miike’s oeuvre. The first features a mixed-race police detective pitted against a Taiwanese gangster, and the second centres on the life of a Japanese gangster exiled in Taiwan. Throughout them all, Miike’s fast-paced cutting, acutely-developed and innovative mise-en-scène and hyperbolic approach to onscreen violence spring to the fore, although there is plenty more going on beneath the bombastic onscreen onslaught.