A new restoration of Scarecrow, starring Al Pacino and Gene Hackman as an ex-convict and a sailor crossing the USA on an epic road trip, is a chance to rediscover a neglected classic of 1970s American cinema. As this Cannes Palme d’or winner is rereleased nationwide, we buckle up for 10 great American road trip films. 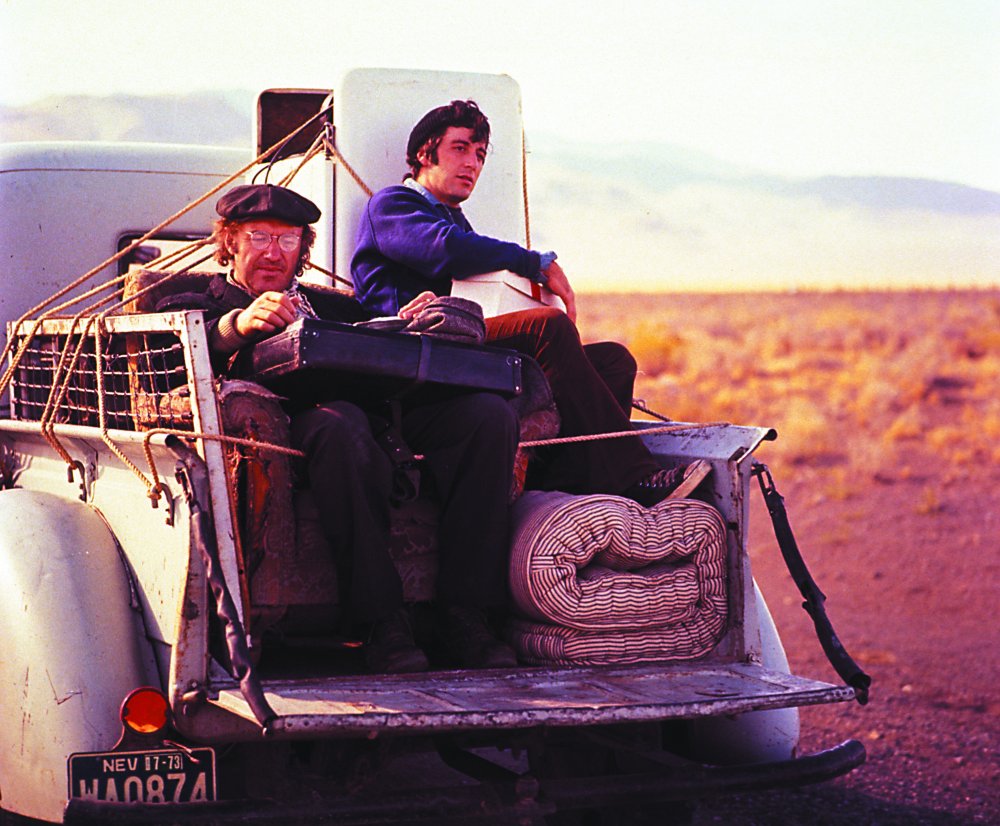 The great burst of creativity and invention in American cinema during the late 1960s and early 1970s is one of the more fabled and raked over periods in cinema. The big studios loosened their grip on the genre formulas which had kept classic Hollywood going for so long, in an attempt to connect with new, young, hip, countercultural audiences. A gap was left open in the garden fence, allowing the likes of Martin Scorsese, Robert Altman, Peter Bogdanovich and Terrence Malick to come in and make cinematic hay on Hollywood’s manicured lawn.

Jerry Schatzberg’s 1973 road movie, Scarecrow, is evidence that there are still rediscoveries to be made from even this eulogised time. Schatzberg was a fashion photographer (he shot the wiry-haired portrait of Bob Dylan on the cover of Blonde on Blonde) before making his film debut with Puzzle of a Downfall Child in 1970. His second film, The Panic in Needle Park, starring Al Pacino as a heroin addict on the wintry streets of New York, was a revelation when it was finally reissued on DVD last year.

The story of two vagabonds, a sailor and an ex-convict, who meet in California and travel east across the US to start up a business together in Pennsylvania, Scarecrow teamed Schatzberg with Pacino again, and Gene Hackman. But, though it won the Palme d’or at the 1973 Cannes Film Festival, it remains far less well-known than such big names would suggest.

It’s almost as if New Hollywood filmmakers, lured to the subject of the open road by its promise of freedom and possibility, had furnished us with so many classic tales on the tarmac – Bonnie and Clyde (1967), Easy Rider (1969), Five Easy Pieces (1970), Badlands (1973), Thieves like Us (1974) – that the canon had no room for another.

Still, every crowded field needs its Scarecrow and the rerelease of Schatzberg’s film will hopefully bring it to more people’s attention. To celebrate, we’ve filled our tank full of gas, slung a suitcase in the trunk and we’re hitting the two-lane blacktop in search of 10 great American road trip films. 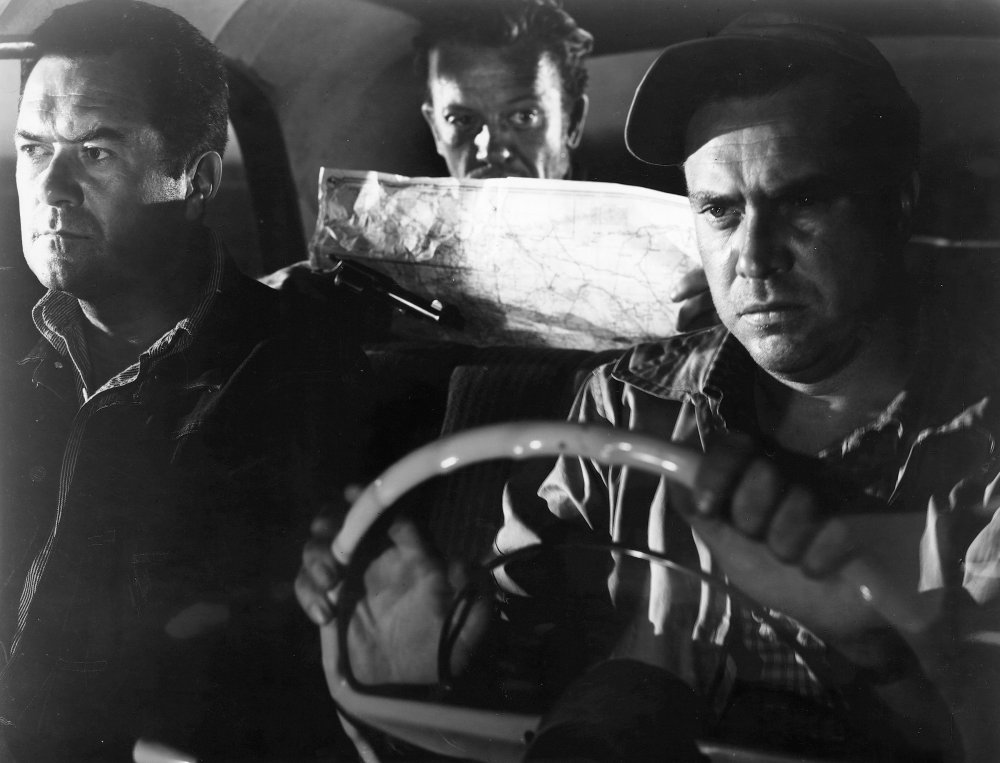 “When was the last time you invited death into your car?” asked the poster for Ida Lupino’s The Hitch-hiker, believed to be the first film noir by a female director. On a fishing trip, two American husbands (Edmond O’Brien and Frank Lovejoy) divert south of the border into Baja California, where they pick up a hitchhiker (William Talman) who turns out to be a wanted killer.

As he forces them to drive him further down into Mexico, the director turns a B-movie budget to thrilling advantage, setting the action either within the car, by rocky desert roadsides or by the shadowy light of a night-time campfire. Nerves fray, the landscape is unforgivably desolate, and – at 71 minutes – Lupino keeps things taut as a fan belt and quicker than a drive south out of Los Angeles. 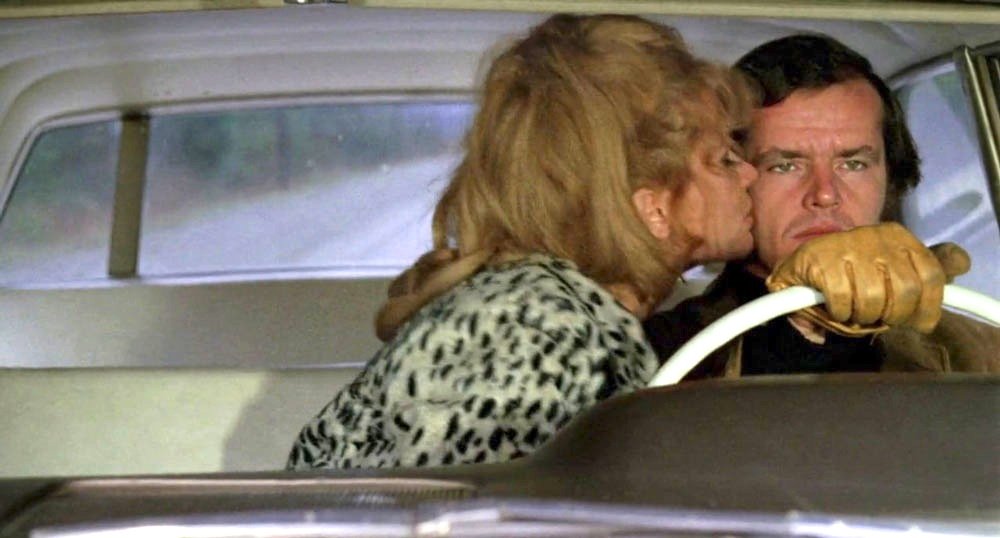 Jack Nicholson had already tagged along on the great motorbike trip through the American south-west in 1969’s countercultural hit Easy Rider, but the following year he found himself in the driving seat in a more subtle, reflective examination of American life and landscape. He plays Bobby Dupea, a blue-collar worker in California who travels upcoast to the Pacific Northwest to attend his ailing father, the patriarch of a well-to-do musical family living on the coast of Washington.

An outsider, the classically trained Bobby is as alienated from his fussily cultivated family as he is out of place among the oil derricks of the Golden State. Taking along his waitress girlfriend, Rayette (Karen Black), his trip through Oregon takes in oddball hitchhikers, grungy motels, and a famous scene in a diner when Bobby lashes out at a waitress who insists he sticks to the menu. All the while, director Bob Rafelson proves himself unusually sensitive to the poetic textures of remote locales. 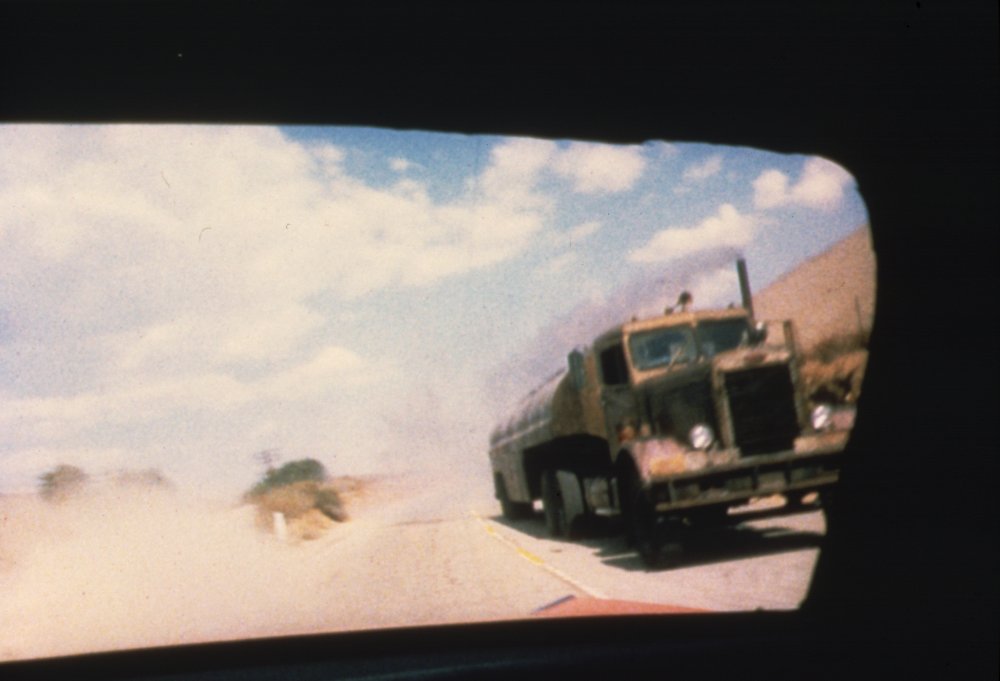 Made for television, Steven Spielberg’s first film is a simple but brutally efficient thriller about a salesman, David Mann (Dennis Weaver), travelling through the California desert who is menaced at every turn by a smoke-spewing truck. Meeting disbelief from the patrons of the roadside diners and truck stops where he seeks help, Mann’s trip becomes a nightmare odyssey, as the mild-mannered businessman is forced to rise to the deadly occasion.

The truck’s driver is never seen, and his motive never explained, making the rusty juggernaut a terrifying adversary to rival the great white shark in Spielberg’s later breakthrough, Jaws (1975). The director’s gift for white-knuckle, Hitchcockian suspense is already fully honed here, and this clash between Mann and machine remains one of Spielberg’s greatest films. 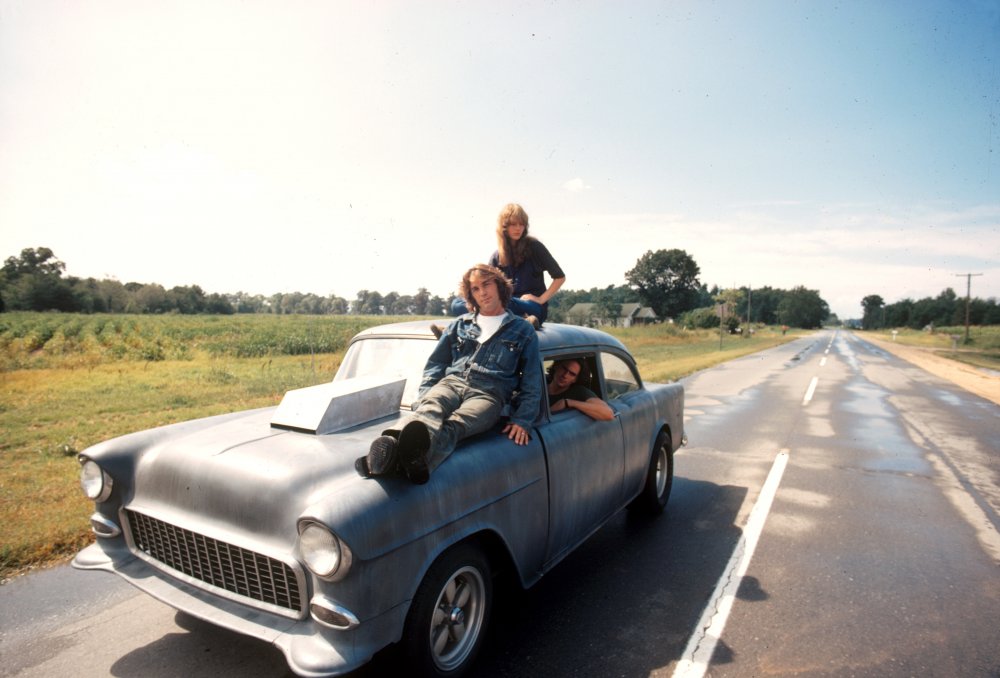 Just as Duel’s Mann stood in for everyman, his peril potentially everybody’s, so in Monte Hellman’s Two-lane Blacktop characters have no names but are instead referred to as ‘The Driver’, ‘The Mechanic’ and ‘The Girl’. This is a road movie stripped down to the chassis, a vehicle for existential escape. The ‘story’ of two drivers (James Taylor and The Beach Boys’ Dennis Wilson) in a 1955 Chevy who get into a race with a GTO (driven by Warren Oates) along Route 66, it’s a film about the fetish of speed, movement, and the smell of burning gasoline.

Hellman’s minimalist voyage through the American heartlands, from California, via Arizona, New Mexico, Oklahoma and into the south, was a commercial failure on release, but has become a cult classic – even inspiring the famous Cannonball Baker Sea-To-Shining-Sea Memorial Trophy Dash, or ‘Cannonball Run’.

The criminal couple-on-the-run film accounts for many classics of the road movie genre, from Gun Crazy (1950) to Natural Born Killers (1994). By 1973, New Hollywood filmmakers had all but done the form to death in the wake of Arthur Penn’s Bonnie and Clyde. But along came a prodigious film student by the name of Terrence Malick to forge Badlands, a visionary evocation of a teenage couple who flee their South Dakota hometown after Kit (Martin Sheen) murders Holly’s (Sissy Spacek) authoritarian father.

Narrated with storybook naivety by Holly, their escape begins in an idyllic rural hideout before they are forced out across the empty spaces of the mid-west when the forces of civilisation close in upon them. The distinctive, childlike theme music (adapted from Carl Orff) was later reused in the 1993 couple-on-the-run film True Romance.

After a run that included Halloween (1978), Escape from New York (1981) and The Thing (1982), Starman is sometimes dismissed as a misstep by director John Carpenter into Spielbergian family-oriented fantasy. But the comparative lack of action and terror shouldn’t disguise the fact that this is a tender, beautifully acted love story, and an intriguing science-fiction pit-stop in the road movie canon.

When an alien life form is shot down over Wisconsin, it finds its way to the home of a recent widow, Jenny (Karen Allen), and guilelessly adopts the appearance of her dead husband (in the form of Jeff Bridges). After her initial shock and disbelief, Jenny agrees to help the starman evade capture by the US Army, taking to the road with him on a drive south to Arizona, where he hopes to rendezvous with his own kind. With childlike wonder and confusion, Bridges portrays the starman’s in-at-the-deep-end education in a world of credit cards, gas stations, motels, roadkill, and the bewildering sights and sounds of Las Vegas. 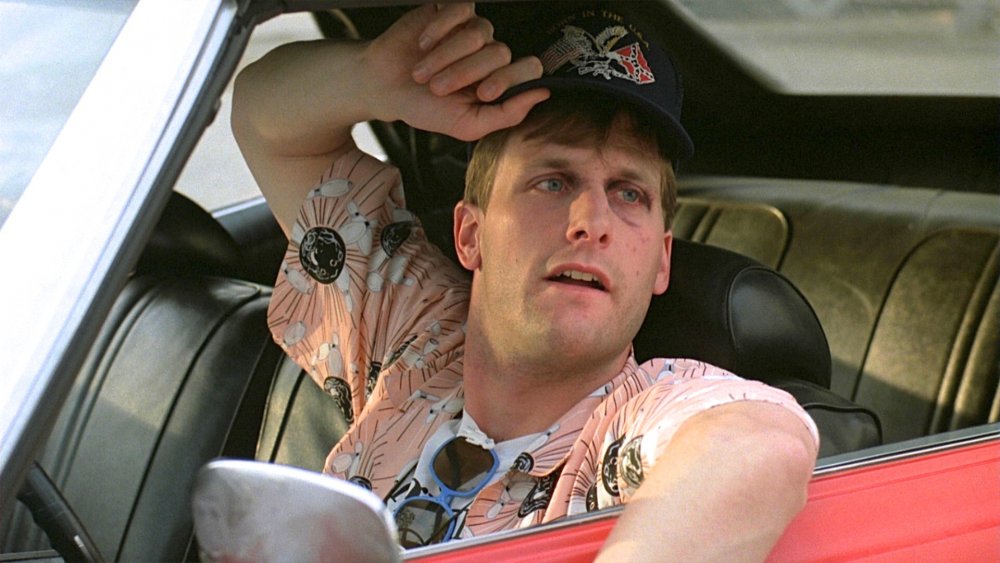 Paying tribute to 1930s screwball comedies – including It Happened One Night (1934), one of Hollywood’s inaugural road movies – Jonathan Demme’s Something Wild is a bold, joyous, terrifying trip through America’s eastern states, filled with eye-popping primary colours and a jubilant soundtrack of 80s art rock and reggae.

It kicks off in New York, where yuppie Charlie Driggs (Jeff Daniels) encounters Lulu (Melanie Griffith), an alluring, black-bobbed kook. She encourages him to ditch an afternoon of work in favour of an increasingly bizarre road trip down to Virginia, which takes in bondage, a high school reunion, and a gas station hold-up at the hands of Lulu’s dangerous ex-con husband (Ray Liotta). Starting out in a pressed office suit, Charlie’s straight-laced side ends up in tatters as he discovers the thrills of spontaneity and adventure – ending up in blue plastic sunglasses and a ‘Virginia is for lovers’ tourist t-shirt and cutting angular shapes on the reunion dance floor. 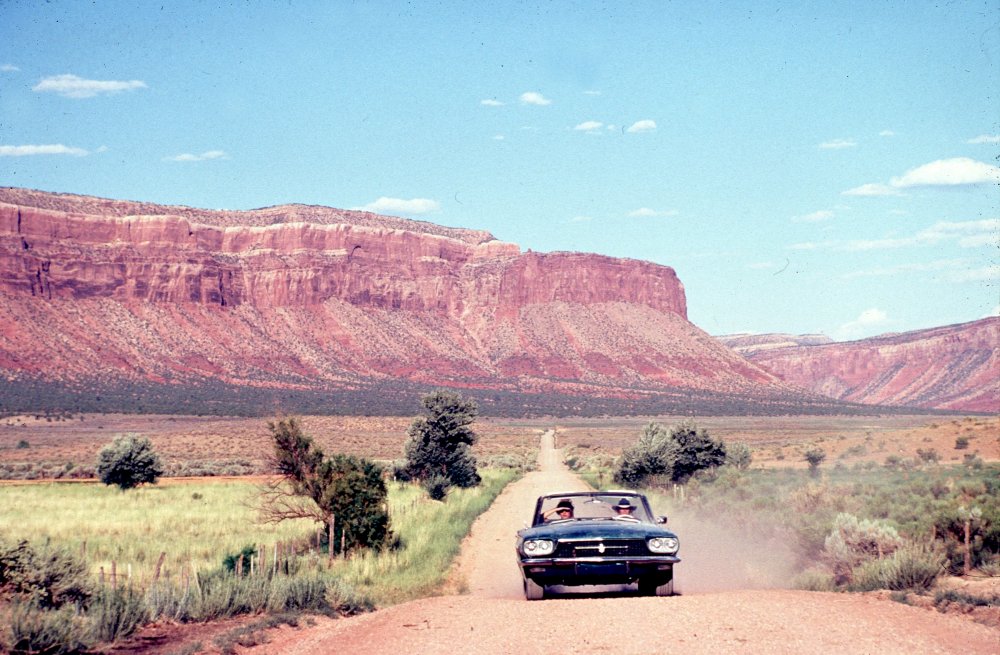 The road movie enjoyed a resurgence in the early 1990s, with the genre being seized upon by independent filmmakers wanting to make their mark. Gus van Sant’s My Own Private Idaho (1991) and Gregg Araki’s The Living End (1992) were key films in the New Queer Cinema movement which took to the American highway, while – in the multiplexes – Ridley Scott’s Thelma & Louise was a wildly popular feminist take on the couple-on-the-run film.

Waitress Louise (Susan Sarandon) and her friend Thelma (Geena Davis), who lives under the yoke of her domineering husband, head out for a trip into the mountains in a 1966 Ford Thunderbird convertible. Things take a dramatic turn when Louise shoots dead an attempted rapist, leaving the outlaw pair no option but to put pedal to metal for Mexico – with the law in pursuit. Scott delights in Marlboro ad imagery of the desert south-west, its roadside Americana and the vast, gaping grandeur of the Grand Canyon. 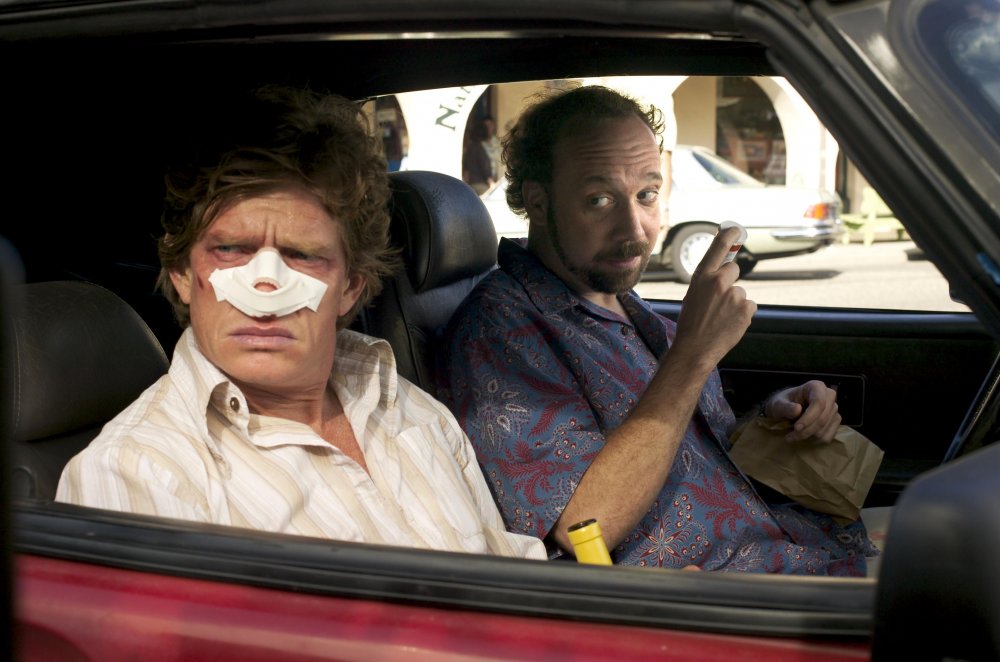 Director Alexander Payne has returned again and again to the road trip as a voyage of emotional discovery for his characters: About Schmidt (2002) is the best film ever made about the US’s nomadic RV culture; The Descendants (2011) has George Clooney on a drive around Hawaii to confront his ailing wife’s lover; and his new film Nebraska (about to premiere at the Cannes Film Festival) accompanies an estranged father and son on a trip from Montana to the Cornhusker State.

His 2004 hit Sideways is no exception, using a road trip into California wine country to expose the fractured emotional state of oenophile author Miles (Paul Giamatti). One of Payne’s most perfectly judged balancing acts between humour and pathos, Sideways is as funny as it is often painful in its acute portrait of middle-aged disappointment and loneliness. It also doubles as an intoxicating advertisement for the sun-gilded beauty of Santa Barbara County, with the region’s upscale restaurants, motels and tasting rooms all unerringly brought to cinematic life. 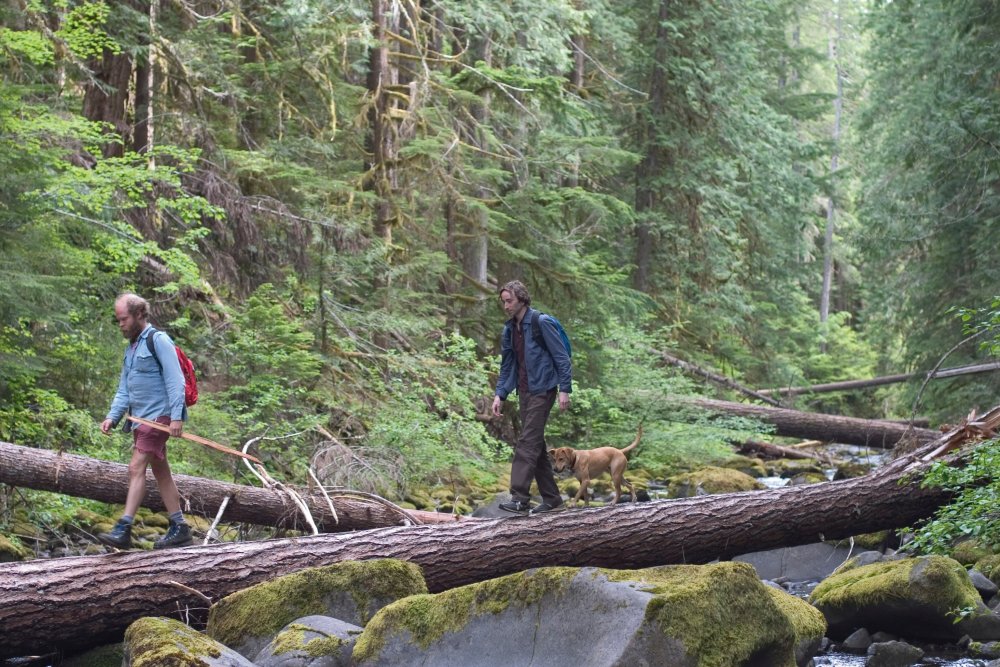 US indie director Kelly Reichardt is another filmmaker who keeps returning to the road. She described her Florida-set debut, River of Grass (1994), as a “road movie without the road”; Wendy and Lucy (2008) stars Michelle Williams as a young woman travelling north to Alaska who gets stranded in Oregon when she runs out of money; and Meek’s Cutoff (2010) is about a wagon trip through the Oregon high desert in pioneering days.

Old Joy is a simple, subtle tale of two male friends, Mark (Daniel London) and Kurt (Will Oldham), who head out for the weekend to a remote hot spring deep in the forest to the east of Portland. Over the course of their car journey, round-the-campfire camaraderie, and eventual soak in the wooden bathtubs at Bagby Hot Springs, fissures of discontent and sublimated desire grow plain as day, with Kurt regretting the decline in their friendship since Mark’s marriage. Reichardt follows Gus van Sant in her dedication to the lifestyles and landscapes of the Pacific Northwest.