French film archive’s discovery a boost for the BFI’s own search for A Study in Scarlet.

A silent version of Sherlock Holmes from 1916 has been found, giving fresh hope to the BFI’s own search for missing Holmes film A Study in Scarlet (1914). Long considered lost since its first release, the Gillette film is considered the vital missing link in the history of Holmes on screen. Directed by Arthur Berthelet and produced by Essanay in 1916, it was discovered at the Cinémathèque Française only a few weeks ago.

By the time the film was made, Gillette had been established as the world’s foremost impersonator of Holmes. He gave his face and manner to the detective on stage and inspired the classic illustrations of Frederic Dorr Steele. Dynamic but calm, he played Holmes in the colourful attire that has been identified with the character ever since – the bent-stemmed briar, the ornate dressing gown, and the deerstalker cap. Just as durable was Gillette’s distinctive manner, preserved in the film: the charismatic, all-seeing detective who dominates scenes by his preternatural stillness.

Booth Tarkington famously wrote after seeing Gillette on stage, “I would rather see you play Sherlock Holmes than be a child again on Christmas morning.” For the famous Chicago bookman, Vincent Starrett, Gillette was an institution beyond criticism. But perhaps the most telling accolade came from Conan Doyle himself, who had killed Holmes off and thought he was through with the character. After reading Gillette’s play, he said, “It’s good to see the old chap back.” 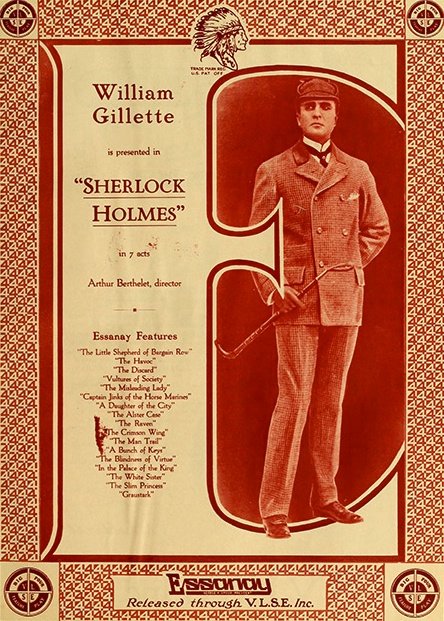 The newly-found Essanay production is not only Gillette’s sole surviving appearance as Holmes. It is also the only film Gillette ever made, a unique opportunity to view the work of a major American actor in the legendary role that he wrote for himself. The film faithfully retains the play’s famous set pieces – Holmes’ encounter with Professor Moriarty, his daring escape from Stepney Gas Chamber, and the tour de force deductions – and illustrates how Gillette wove bits from Conan Doyle’s stories ranging from A Scandal in Bohemia and The Final Problem into an original, innovative mystery play. 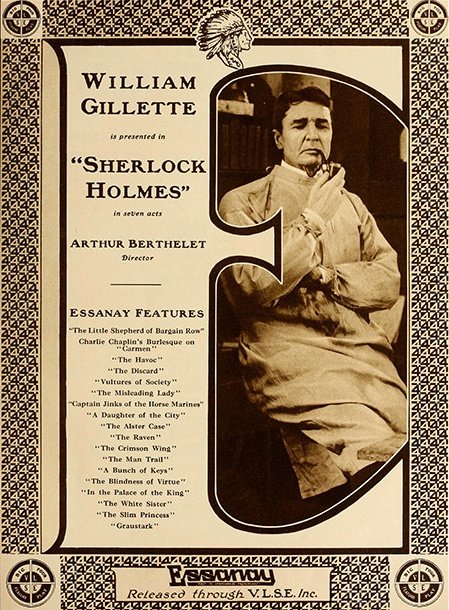 A nitrate dupe negative of Sherlock Holmes was found in the vaults of the Cinémathèque Française. Originally assembled for French distribution, the dupe neg contains French flash titles and colour annotations. This colour information is quite surprising for an Essanay film, since usually Essanay’s domestic releases were in black and white. The colours in this case were probably intended for French distribution.

The dupe neg is now being digitally restored through a collaboration between the Cinémathèque Française and the San Francisco Silent Film Festival, the third partnership between the institutions. The fragile film negative, which had been divided into dozens of small rolls, has been scanned at 4K resolution and is currently undergoing extensive digital image repair to ameliorate the effects of time and wear, such as dirt, scratches, shrinking, and warping. Restoration will include recreation of the original colour tinting and will culminate with the production of a new 35mm film preservation film negative, 35mm film prints, and digital cinema packages. Versions featuring both the French intertitles present within the negative, and a version featuring English translations of the titles, will be produced.