The 2013 BFI Statistical Yearbook shows UK film continued its international success in 2012, claiming a solid 15% share of the global box office (pulling in over $5.3 billion) – the third highest on record – with Skyfall alone earning over $1.1 billion and The Best Exotic Marigold Hotel ($135 million) and The Woman in Black ($128 million) flying the flag for UK independent films on the world stage. 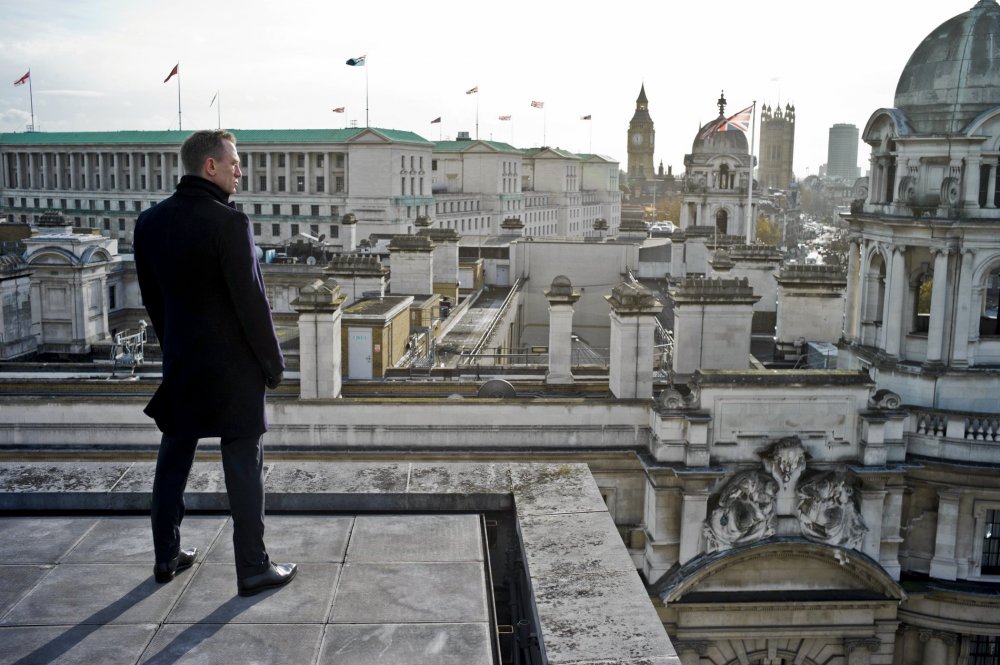 At home cinema admissions reached 172.5 million in 2012, their third highest level for the last 40 years, with over-45s the largest proportion of British cinema audiences for the first time. UK box office receipts totalled £1.1 billion – the highest on record.

The BFI reports that UK talent and films won 23 major awards during the year, and UK creativity fostered economic success, captivated audiences and helped export UK culture around the world: British films are now in first and second place of the most successful film franchises of all time, with Harry Potter taking over $7.7 billion worldwide and Bond currently at over $6.1 billion; two thirds of the top 200 films released worldwide since 2001 feature UK actors in lead or prominent roles; and 31 films based on stories and characters created by UK writers in the top 200 global box office successes of 2001-2012, together earning more than $22 billion (£14 billion).

The Yearbook also highlights significant changes in the way audiences enjoy films, with changing demographics of cinema audiences, challenges in the distribution sector, shifting patterns of film consumption away from physical video (DVD, Blu-ray), and rapid growth in the VoD market, worth £243 million in 2012, having far-reaching implications for the entire film value chain.

Compiled by the BFI’s Research and Statistics Unit, the Statistical Yearbook presents the most comprehensive picture of film in the UK and the performance of British films abroad during 2012. Now in its 11th year, the Yearbook is a valuable evidence base for industry and policy-makers.

Three very British superheroes – Bond, Boyle and Bean – helped fly the flag for UK film during the Olympic opening ceremony and our suave British spy led something of an invasion into global cinemas in 2012. UK films captivated audiences and 007 spearheaded another strong year for UK film internationally, which collectively pulled in $5.3 billion and helped export British culture and creativity around the world in 2012. Our Yearbook shows film’s continued importance to the UK economy overall, with a record turnover of £7.7 billion and trade surplus of £1 billion in 2011.

It’s encouraging that UK audiences of all ages embraced the cinema experience and it’s very exciting that we may be heading towards a tipping point in audience use of Video on Demand services. But we can’t fully explore this growing new market without the numbers so we need providers of Video on Demand services to release robust data to help us better understand and analyse the emerging VoD market for the benefit of the entire UK film industry.

Despite stiff competition from the spectacular London Olympic and Paralympic games, Diamond Jubilee celebrations and Euro 2012 football championship, cinema proved its resilience in 2012: Skyfall took £103 million at the UK box office to become the highest earning film of all time, overall admissions were up 0.5% to 172.5 million, the third highest figure of the past 40 years, and box office receipts rose 6% to £1.1 billion – the highest on record. 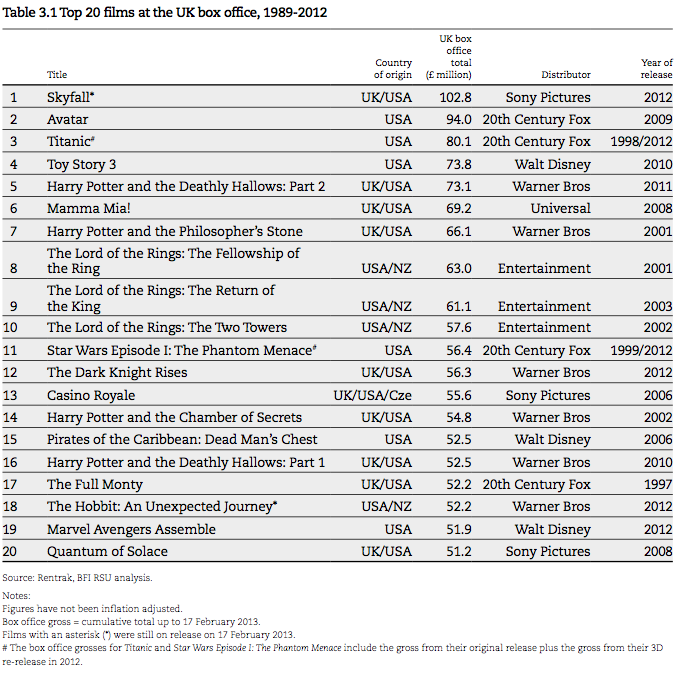 There were 647 films released during the year – more than 12 per week and 89 more than in 2011 – and action was the UK’s favourite genre, taking 28% of the box office and pushing usual favourite comedy into second place. The Dark Knight Rises (£56.3 million), The Hobbit: An Unexpected Journey (£52.2 million) and Marvel Avengers Assemble (£51.9 million) were the year’s highest earners after Skyfall, and despite a fiercely competitive marketplace, UK films fared well, taking 32% of the total UK and Republic of Ireland box office, with the top 20 together grossing £348 million. 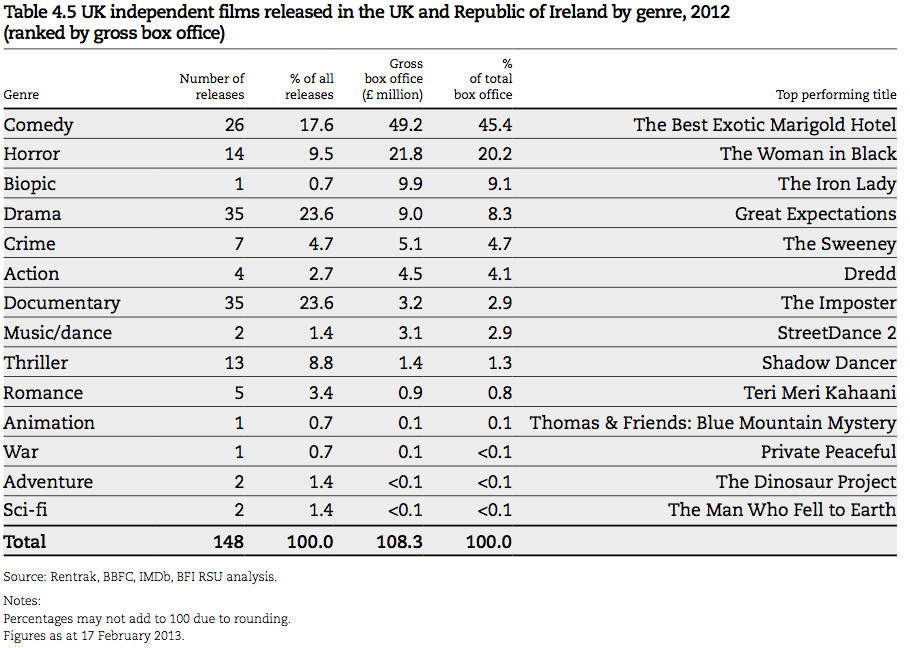 The highest grossing UK independent films were The Woman in Black and The Best Exotic Marigold Hotel, taking more than £20 million each, with the top 20 independent UK films of 2012 clocking up a combined gross of £98.5 million and UK independents overall taking 9% of the total box office, their second highest market share on record.

Stories from UK writers proved a real draw to audiences – though only 5% of films released during the year were adapted from UK story material, they accounted for 23% of the total box office. These films were based on characters first written in 1937 (The Hobbit), 1958 (Bond) and 1983 (Woman in Black), a clear reminder of the enduring economic value of British cultural excellence.

For the first time ever, at 36% of the total, over-45s were the largest proportion of the UK cinema audience, up from 28% in 2011 – a trend fuelled by an increasing number of films tailored for and marketed to older audiences, with three of the most popular films for the over-45s in 2012 being Salmon Fishing in the Yemen, The Best Exotic Marigold Hotel and Anna Karenina. At the same time there appears to be a decline in younger audiences at the cinema, with the 15-24 age group decreasing from 31% in 2011 to 25% of the total in 2012, but more data and research is needed in this area to better understand shifting patterns of film consumption across all platforms. 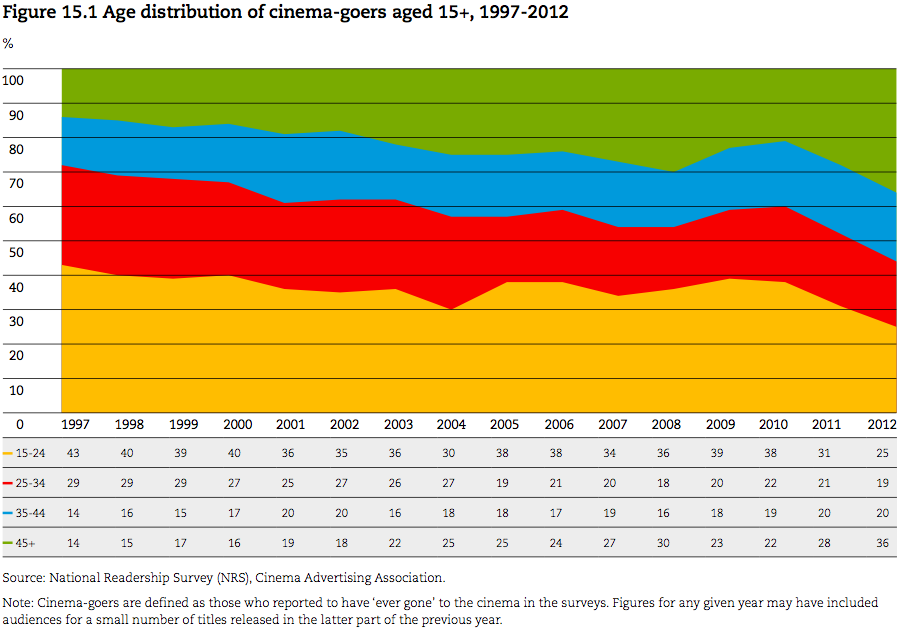 Despite record box office takings, there are continued challenges for distributors of independent and specialised films in the UK. The top 100 films earned 92% of the total gross, leaving the remaining 547 films competing for box office revenues of £93 million, less than the gross earned by Skyfall. Continued public investment is critical to help distributors mitigate commercial risk and ensure a diverse range of films is available to UK audiences – the BFI has committed through its Film Forever plan to supporting such distributors through its £4m Distribution Fund, and to developing audiences for specialised film through its £22m Audience Fund.

Most films are seen on television and in 2012 viewers had a choice of over 7,400 film titles across all channels, with a cumulative film audience of just under 3.9 billion – over 22 times the number of cinema admissions. The top film on terrestrial television was Shrek Forever After on BBC One on Christmas Day, with 5.4 million viewers. 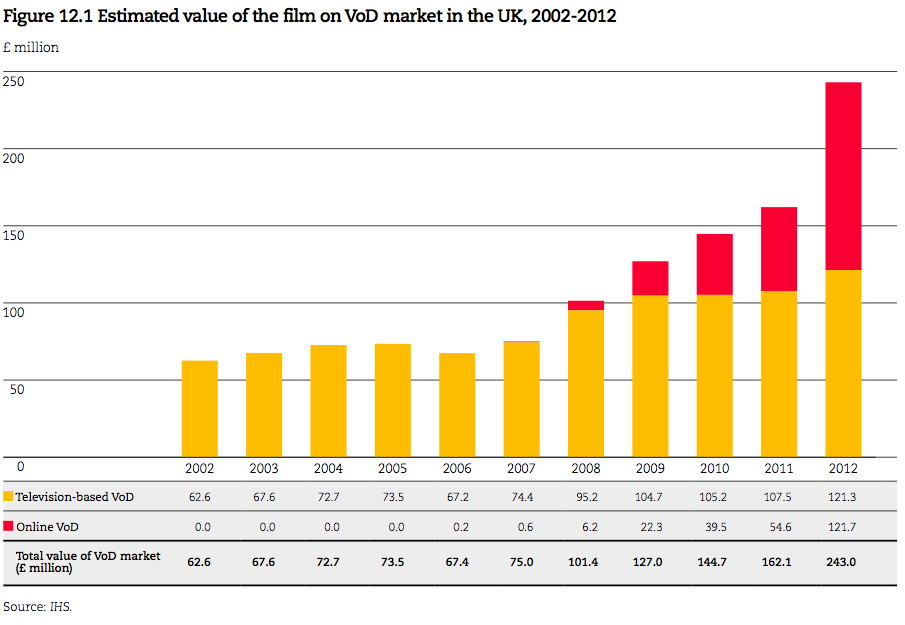 The VoD market may be growing into the gap left by video. The total VoD market for film was estimated to be worth £243 million in 2012, a 50% increase on the previous year, with audiences increasingly streaming films online using subscription services such as LOVEFiLM Instant and Netflix, leading to a 123% increase in online film revenues (worth an estimated £122 million) during the year.

With broadband speeds increasing, smartphone and tablet ownership on the rise and internet-enabled television sets becoming more commonplace, the BFI expects further shifts in the consumption of filmed entertainment over the coming years. As VoD develops and matures it is more important than ever for robust data to be made available to the film industry, to help widen understanding of this exciting growth area, particularly for independent and specialised film.

The UK retained its reputation as a home to world-class creative talent, with a strong global performance for UK films and talent in 2012. In a record year for the global box office, which took $34.7 billion overall, UK films earned $5.3 billion, a 15.3% market share which, though down slightly on 2011’s record-breaking 17.2%, is still the third highest on record. 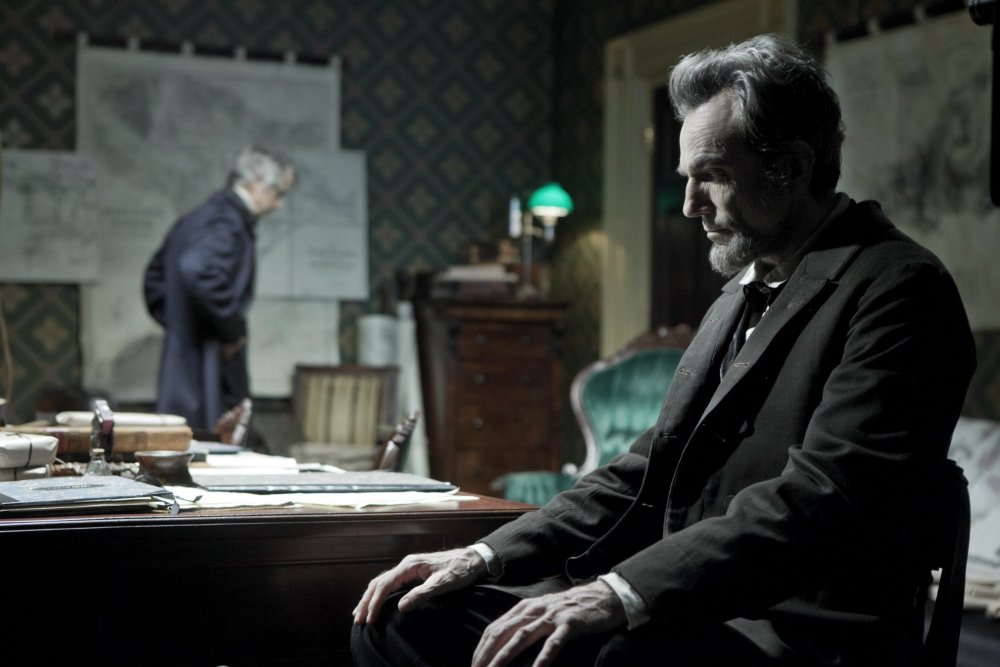 UK films and talent in front of and behind the camera won 23 major film awards in 2012, including four Oscars and 12 BAFTAs. In 2013, six Oscars and 13 BAFTAs went to UK winners, including Daniel Day-Lewis who won the Leading Actor award at both ceremonies for his portrayal of Abraham Lincoln and made history as the first man ever to win three best actor Oscars, and UK independent film Searching for Sugar Man was also a double winner, picking up the Documentary Feature award at both ceremonies.

The year marked the 50th anniversary of the UK’s most enduring cinematic icon, James Bond, and the year saw the series go from strength to strength as Skyfall become the first Bond film to gross over $1 billion at the worldwide box office.

To date the hugely popular series has grossed over $6 billion worldwide, becoming the second highest grossing franchise of all time (behind fellow British series, Harry Potter), and has sold over 39 million DVD and Blu-ray discs in the UK (including individual components of box sets). Since the BFI began tracking in 1997, the Bond films have been viewed over 1 billion times on UK television. The films have helped shine a spotlight on the UK’s infrastructure, with Pinewood Studios known the world over as the home of James Bond, and helped develop skills and opportunities for British film crews. Following his starring role alongside Her Majesty The Queen in the Olympics opening ceremony and with the films more popular than ever, Britain’s enigmatic spy remains firmly at the forefront of UK film.

The UK film industry continues to be a valuable and growing sector of the British economy, with a turnover in 2011 of £7.7 billion – its highest ever total – and a direct contribution to Gross Domestic Product of £3.8 billion, two and a half times its 1995 contribution in real terms. The industry exported £1.7 billion worth of services in 2011, made up of £1,199 million in royalties and £540 million in film production services, and exports in 2011 were 121% higher than 1995. The UK film trade surplus in 2011 was £1 billion. 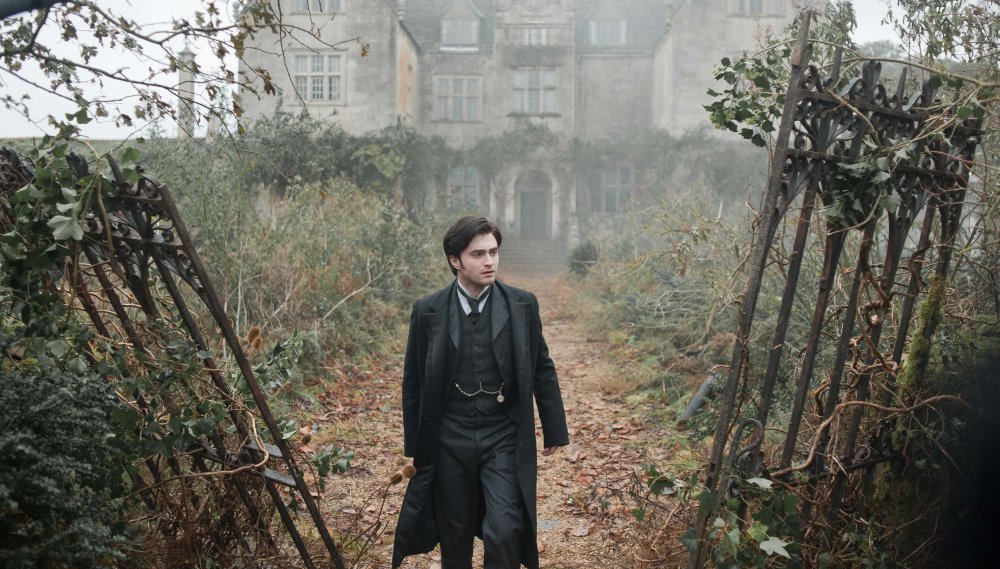 There were 249 feature films produced wholly or in part in the UK during the year, down from 331 in 2011, with the total value of production spend in the UK over £929 million, down 27% from 2011’s £1.2 billion. The year saw the UK spend from domestic UK films and UK co-productions rise, despite the fact fewer films were made, and a decrease in the spend of inward investment films. Films produced during the year included The Fast and the Furious 6, I Give It a Year, The World’s End, Jack Ryan, Spike Island, Maleficent, Diana, Filth and Rush.

Inward investment films, which bring international investment by using UK facilities, services and crew contributed £630 million (68%) in 2012, down 38% from 2011’s exceptional and record-breaking figure of just over £1 billion, while 40 co-productions (down from 47 in 2011) contributed £74 million, up from almost £63 million in 2011. The spend of domestic features hit a three-year high of £226 million, up nearly 16% from £195 million in 2011, helped by films including Ralph Fiennes’ The Invisible Woman, Michael Winterbottom’s The Look of Love and Tom Hooper’s Les Misérables, though 64% of domestic films in 2012 were made with budgets of less than £500,000 – with these ‘micro-budget’ films often forming an important stepping stone in the career development of new film talent.