Outdoor screenings of The Man Who Fell to Earth, Flash Gordon and The Day the Earth Caught Fire will offer the first glimpse of the BFI’s UK-wide autumn blockbuster Sci-Fi: Days of Fear and Wonder. 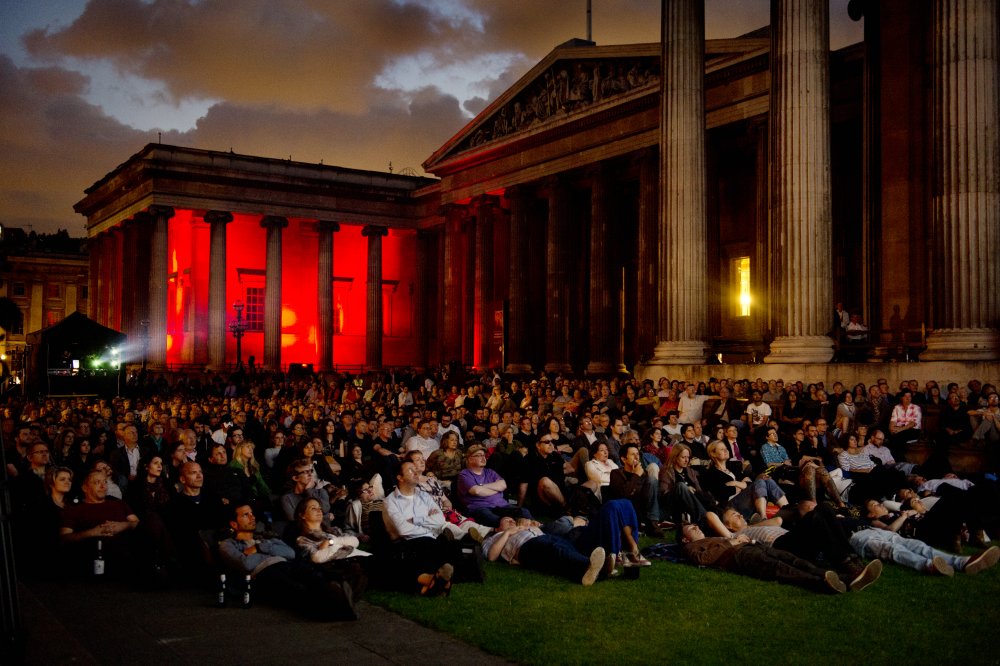 Night of the Demon screens as night falls over the British Museum forecourt
Credit: Linda Nylind

The BFI’s Sci-Fi blockbuster project will blast off from the forecourt of the British Museum in spectacular style with a trilogy of science fiction classics screening over three successive nights, from Thursday 28 to Saturday 30 August. Following the sold-out screenings presented at the British Museum with the BFI Gothic blockbuster in 2013 and the Hitchcock launch the year before, the BFI returns with a trio of classic Sci-Fi film treats: Flash Gordon, The Day the Earth Caught Fire and The Man Who Fell to Earth.

The historic grounds of the British Museum will be transformed for the series of big-screen events over the August Bank Holiday weekend, which will see the three sci-fi classics projected onto a huge, state-of-the-art screen – the BFI’s biggest outdoor screen to date at the British Museum – and will be accompanied by a stellar sound system, thrilling audiences of up to 1,200 each night. Each evening the out-of-this-world entertainment will be accompanied by special guests and the invitation for viewers to participate in the terrestrial fun. On Thursday 28 August the earth will be unhinged from its axis with the screening of London-set classic, The Day the Earth Caught Fire (1961). Friday will see us attempt inter-galactic contact with The Man Who Fell to Earth (1976), starring David Bowie as a stranded alien. The weekend will conclude with a cult classic as we venture to planet Mongo on Saturday 30 August with Flash Gordon (1980).

These extra special outdoor screenings provide a curtain-raiser for the Fear and Wonder to come in the BFI’s major, UK-wide Sci-Fi project, launching in October and running until December. This major film season, in cinemas and online on the BFI Player, presented in partnership across the UK with the BFI’s Film Audience Network, features over 100 film and television titles. Details of the full programme, including screenings, events, film and DVD releases, special guests and more will be revealed on Thursday 17 July at BFI Southbank.

Across literature, television and of course film, the UK has blazed a sci-fi trail and played a central role in cinema’s most enduring and popular genre – from science fiction’s origins with writer H.G. Wells, to our time-travelling television hero Dr Who, to the latest instalment of Star Wars shooting right now at Pinewood.

Sci-Fi  reveals our hopes and fears for the future, lets us makes contact with the cosmos, and takes us on a fantastical journey to the limits of our humanity – we’re excited to open up new worlds of sci-fi film for audiences across the UK, and this spectacular event at the British Museum is the perfect curtain-raiser to our autumn blockbuster.

A Fleet Street journalist (Edward Judd) investigates the world’s increasingly ferocious weather conditions and discovers that the Earth has been knocked off its axis by extensive nuclear testing. Is the Earth doomed? Aided by a vivid depiction of the world of newspaper journalism, and extensive location shooting on the streets of London, director Val Guest delivers one of the best of all British sci-fi films and the chilling scenes of a deserted London rival those in 28 Days Later…

The Man Who Fell to Earth

An alien, stranded on Earth while on a mission to find water for his own world, initiates a plan to amass a fortune in order to fund a space programme that will help him return to his home planet. David Bowie’s impressive performance, in his first major screen role (and clearly building on his other-worldly public persona), helped, in tandem with Nicolas Roeg’s mesmerising direction, to turn this into a cult film.

Alex Raymond’s popular comic strip character bounds on to the screen to heroically save the Earth from the hissable villainy of Ming the Merciless (Max von Sydow on splendid form), ruthless ruler of the planet Mongo. Mike Hodges directs with verve and wit, Queen provide the memorable score and Fellini’s frequent collaborator, Danilo Donati, provides costume and set designs that ravish the eye. And not forgetting Brian Blessed with wings!

Each film £15, no concessions. Joint ticket (all three screenings) £39.

Sci-Fi: Days of Fear and Wonder will run from October-December 2014 with a UK-wide programme of film and DVD releases, special screenings, events, guests and more.