Memories for the future: Mark Webber on Jonas Mekas

On the eve of a two-month BFI tribute to Jonas Mekas, season curator Mark Webber talks about the astounding work of a real-life provocateur. 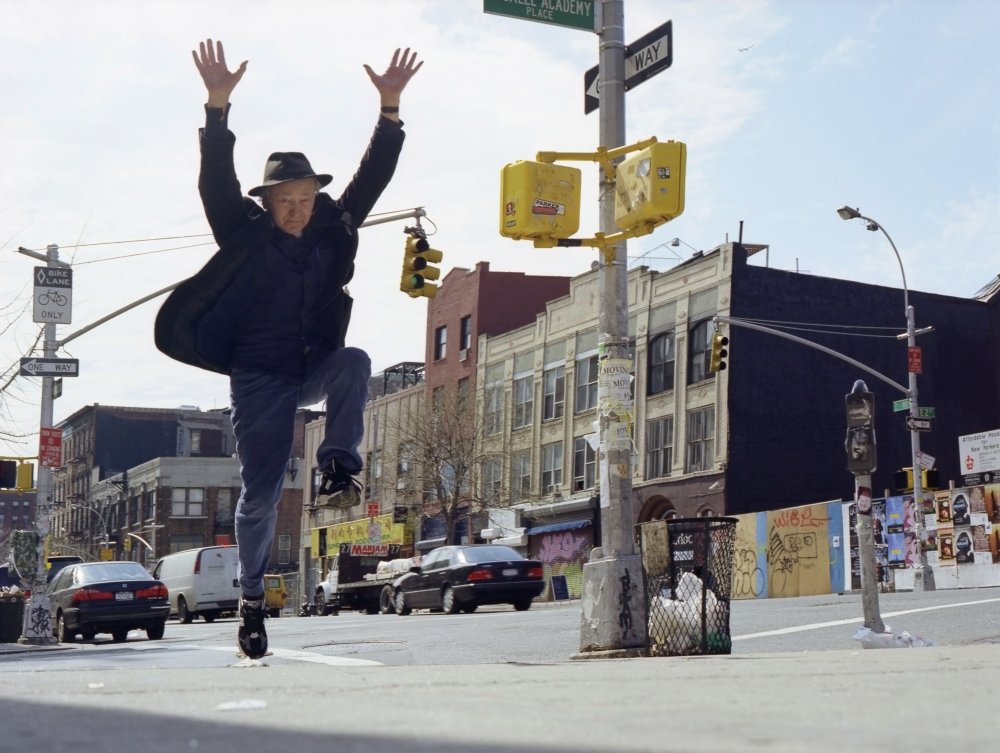 Born in 1922, Jonas Mekas grew up in Semeniškiai, Lithuania. During the second world war, when his hometown was invaded by German forces, Jonas and his younger brother Adolfas (1925-2011) attempted to escape. They took a train bound for Vienna but were caught and transported to a forced labour camp in Elmshorn, outside Hamburg.

In 1949 they were taken by the United Nations to New York, where they settled and bought their first 16mm Bolex camera. A few years later they initiated Film Culture magazine, and in 1958 Jonas started writing his weekly movie column for the Village Voice newspaper.

Jonas Mekas is also one of the founders of Anthology Film Archives. As Mark Webber, the curator of the BFI’s two-month Mekas season, describes: “The idea behind Anthology was to make a repertory collection that would be screened regularly in a cycle of programmes called ‘Essential Cinema’. The original committee that met in 1969 to choose the films that represented what they felt was the hard core, the essential works of cinema to that point, was Jonas Mekas, P. Adams Sitney, Peter Kubelka, Stan Brakhage and Ken Kelman. After a few meetings Stan Brakhage was replaced by James Broughton. They would watch the films together and debate whether or not they should be acquired for the collection.” 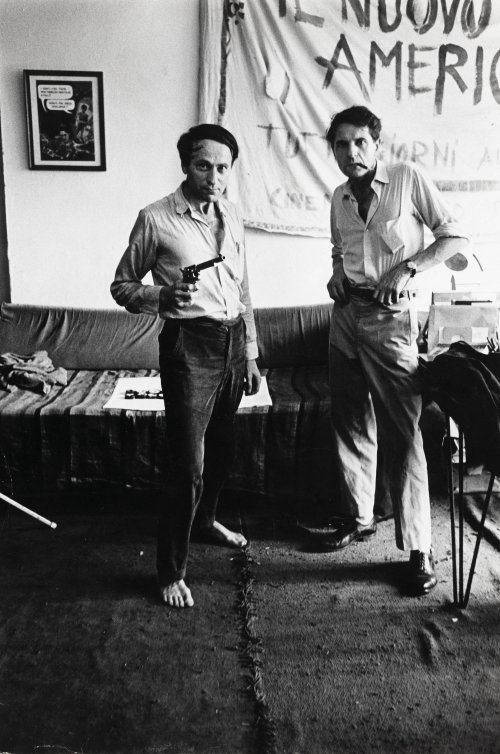 With a prolific 60-year career making films, being a critic, distributor and organiser, Mekas nurtured the development of what is known as New American Cinema. He was a major supporter of avant garde filmmakers Jack Smith, Gregory Markopoulos and Stan Brakhage, and quick to give recognition to the works of Kenneth Anger, Robert Breer, and later Hollis Frampton and Michael Snow.

Running in two parts throughout December and January, the BFI Southbank tribute to Mekas explores his early work, alongside his film diaries from the 1960s until today, and includes a selection of works from the Anthology Film Archives collection. Here curator Mark Webber explains the work that went into this retrospective.

How did the idea of the Jonas Mekas season take shape?

It’s been ongoing for a long time; it’s at least five years since the first steps, mainly because the Serpentine kept postponing the Jonas Mekas exhibition, but now it’s finally happening. Jonas has this new career as a gallery artist but it was important for me to show what I believe is the heart of his work as it should be seen – in the cinema with the best possible conditions.

What’s your role in this project?

I decided which films to show and wrote the texts to publicise them, helped locate the prints and will be introducing some of the screenings and do Q&As. I’ve been doing this for a long time now so I have a good idea of where the best or newer materials are, but the BFI also did research in this area, and with this programme we could always ask Anthology for advice.

Most of Jonas’s films are coming from different distribution cooperatives like Light Cone in Paris, some from the Film-Makers’ Cooperative in New York, others from Anthology’s collection, and the videos direct from Jonas. 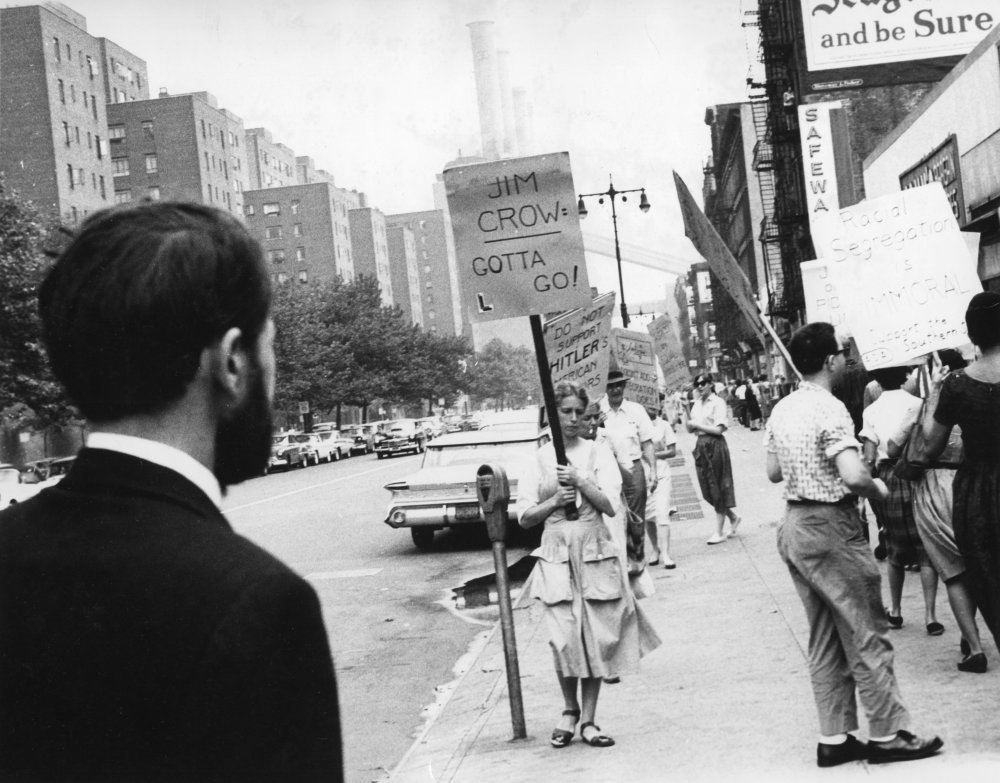 What are the highlights of the programme?

The film that I return to most is Lost, Lost, Lost (1976), which includes some of the earliest footage from when he arrived in New York in the early 50s, through to the 60s when he was most actively involved in organising the film scene. I think that’s possibly his greatest film but then the other diary films like Walden (1969) and As I Was Moving Ahead, Occasionally I Saw Brief Glimpses of Beauty (2000) are also really fantastic. There’s no other work like it.

Does Mekas’s work fall into the documentary genre?

It is documentary in a sense that he’s filming real life, but it’s not staged or scripted. A significant difference is that he’s not trying to impart information about certain subjects or be objective – he’s just filming what’s happening around him, and putting himself in situations where things are happening.

What’s your opinion on the use of the term ‘experimental’ when referring to avant garde film?

In some ways it’s useful to have these labels, it’s kind of helpful to narrow the field down a little because there are so many different kinds of work. If you use that word at least you get some clue as to what country of film you’re inhabiting. But I was never a fan of the word ‘experimental’, it’s a bit derogatory. It suggests that the filmmakers don’t really know what they’re doing.

However this is not the case with experimental music.

Experimental music seems to have more kudos than experimental film. I might be wrong, but musicians don’t appear to object to being called ‘experimental’. I guess ‘avant garde’ is the term used more commonly for film. 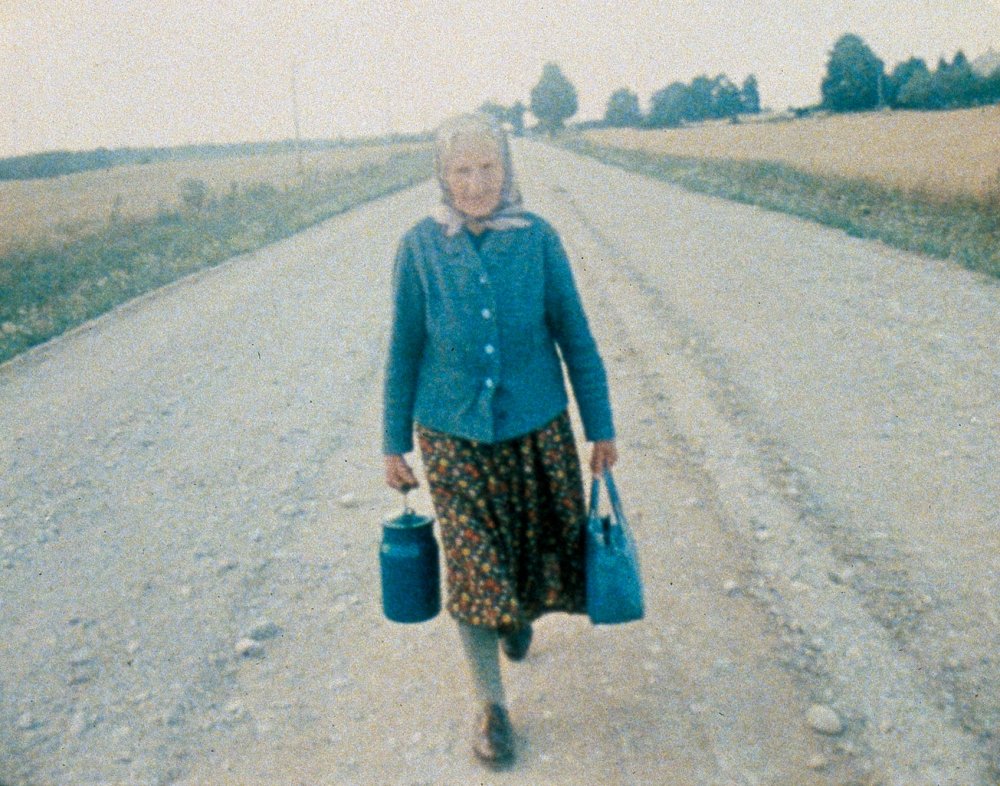 Reminiscences of a Journey to Lithuania (1975)

Can you summarise the position Anthology Film Archives held before its opening 42 years ago?

In the beginning, if any one of the five committee members objected then a film could not be included in the collection, so this was problematic because there were hardly any films they all agreed upon. Stan Brakhage resigned when the committee decided to remove the power of veto.

More than 300 works were acquired, thanks to the support of Jerome Hill, whose money underwrote the whole Anthology project. The films were organised in alphabetical order into about 100 programmes that were repeated every few months. When Anthology opened inside Joseph Papp’s Public Theatre in 1970, with its unique ‘Invisible Cinema’ designed by Peter Kubelka, only the films that were part of the Essential Cinema collection were shown there. 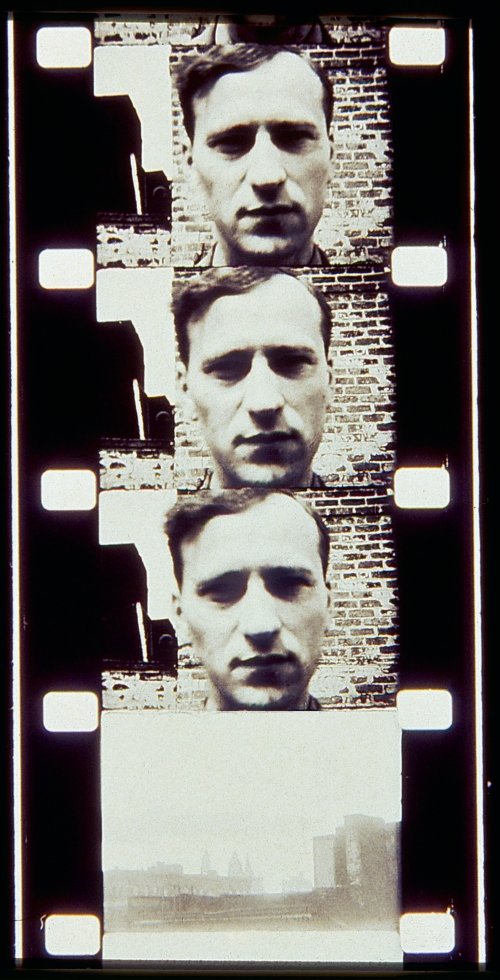 By 1974, when Anthology moved to Wooster Street, they had already begun to show other work. Contemporary filmmakers would be annoyed that their works had been excluded from the collection, but after Jerome Hill died, there was no money to continue acquiring films, so in a way it became a time capsule. Anthology is still showing the Essential Cinema regularly alongside many other kinds of films.

How significant is the work of Anthology Film Archives in the area of independent cinema?

The unique aspect of Anthology is that they particularly focus on avant garde cinema or independent cinema, whereas most other archives are much more interested in feature films, films that already have bigger productions and finance behind them. It might not be the case today because they’re running out of space but they used to take in any film that was offered to them, which is great because you never really know what’s going to be historically significant until some time passes.

Without Anthology, a lot of film history would have been lost, and it’s true that if it wasn’t for Jonas’s support of filmmakers in the first place, many important works wouldn’t even have been made. I guess preservation is a burden that filmmakers carry with them: not only do they have to make new work but they’ve got to maintain it after it’s been made. Film is one thing, but digital has its own set of problems too, with data not being secure, longevity not being proven, constantly being updated in different formats, different cables, different drives. This is also something that Anthology are just beginning to address. 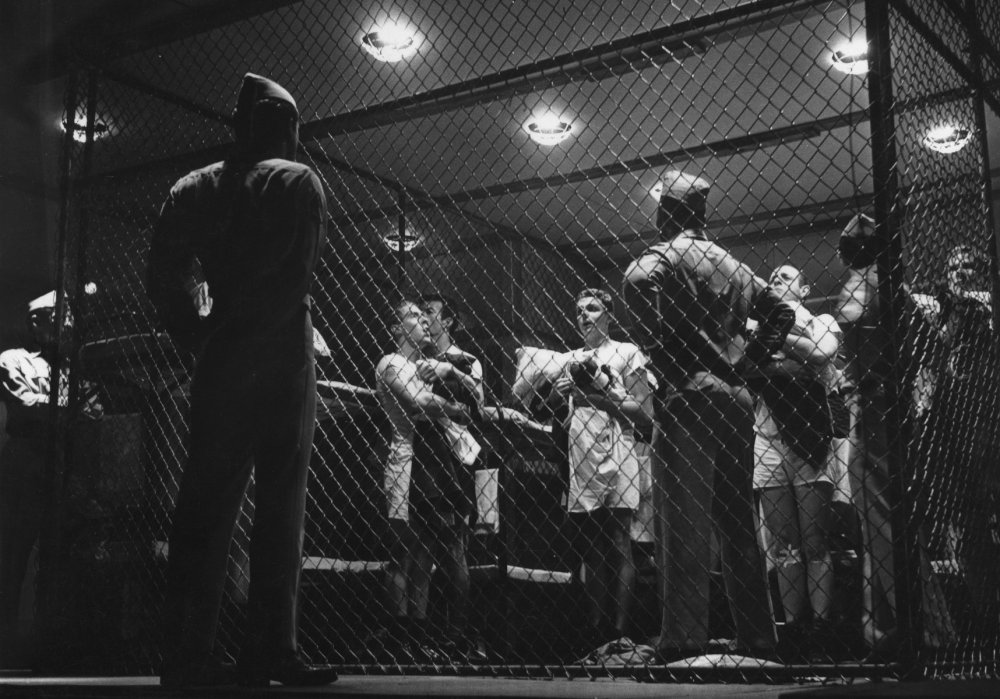 Which other film archives care about avant garde cinema?

There are many including the Austrian Film Museum, founded by Peter Kubelka and Peter Konlechner, which has a really strong collection of avant garde films.  Also there’s the Museum of Modern Art in New York, Pacific Film Archive in Berkeley, the Academy Film Archive in Los Angeles and Arsenal in Berlin. The only real archive in the UK that has any films of this kind is the BFI National Archive, and they do still make new acquisitions but they mainly focus on British works.

On the other hand, there’s the LUX collection, it’s a great resource but it’s not really an archive, so they’re not focused on preservation. It’s a distribution collection so the prints still belong to the filmmakers. All the historical works in that collection are inherited from the London Filmmakers’ Co-operative, which started in 1966 and had a lot of relationships with the generation of filmmakers that are represented in Essential Cinema. A lot of the prints at LUX are the original copies that were deposited with the Coop in the 1960s. 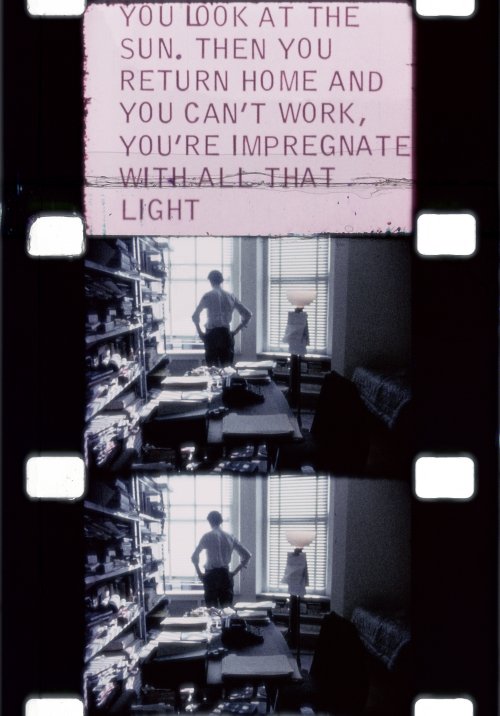 Do you have any thoughts on different ways of programming film?

Nowadays there are as many different curators as there are filmmakers, and they’ve all got their own special interests. I guess my approach is a quite traditional one: I like to sit in the dark space and watch a film from beginning to the end. So because of that, the kind of works I’m interested in programming are those best suited to cinema.

What are the major challenges when programming avant garde films?

A big problem now is money: it’s really expensive to do mixed programmes where you have five or six different titles coming from different places. Shipping costs more than renting the films.

It’s also a problem that the people who manage these venues don’t always have an interest in or knowledge of this area, so they focus on other things. There was always this idea that avant garde cinema was a very marginal interest with no audiences, but this has been proven not to be the case over the past decade or so.

What’s the way ahead for independent cinema funding? 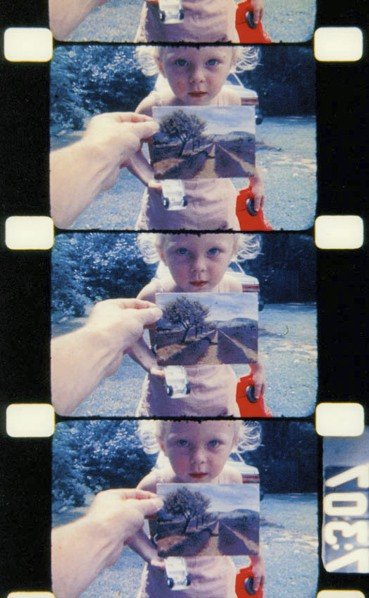 As I Was Moving Ahead, Occasionally I Saw Glimpses of Beauty (2000)

I’ve never managed to find a patron like Jerome Hill in London. I tried… I think I once wrote to David Bowie, but I didn’t get any response! The way Jerome Hill funded Anthology, such a generous individual that felt so strongly about supporting culture, independent of the large institutions, seems to be long out of fashion.

The way things are done now is by museums and organisations employing sponsorship teams to persuade rich benefactors to join their special societies and friendship circles.

Can the galleries and art fairs help independent film production?

They can help independent filmmakers by selling their work, because only a few can actually earn money through distribution or screenings. The problems come with galleries and museums sometimes not understanding the materials, or the differences between film formats. But it’s great that more people are being made aware of this whole field.

The resurgence of interest in Jonas, which has resulted in him having a solo show at the Serpentine Gallery, definitely started through him representing Lithuania at the 51st Venice Biennale in 2005. That completely raised his profile in a different world, and now, after all these years of hard work, he’s finally able to earn a living from his art.