We wish a happy 50th birthday to Fellini’s classic film about a director experiencing creative block, which premiered in Italy half a century ago. 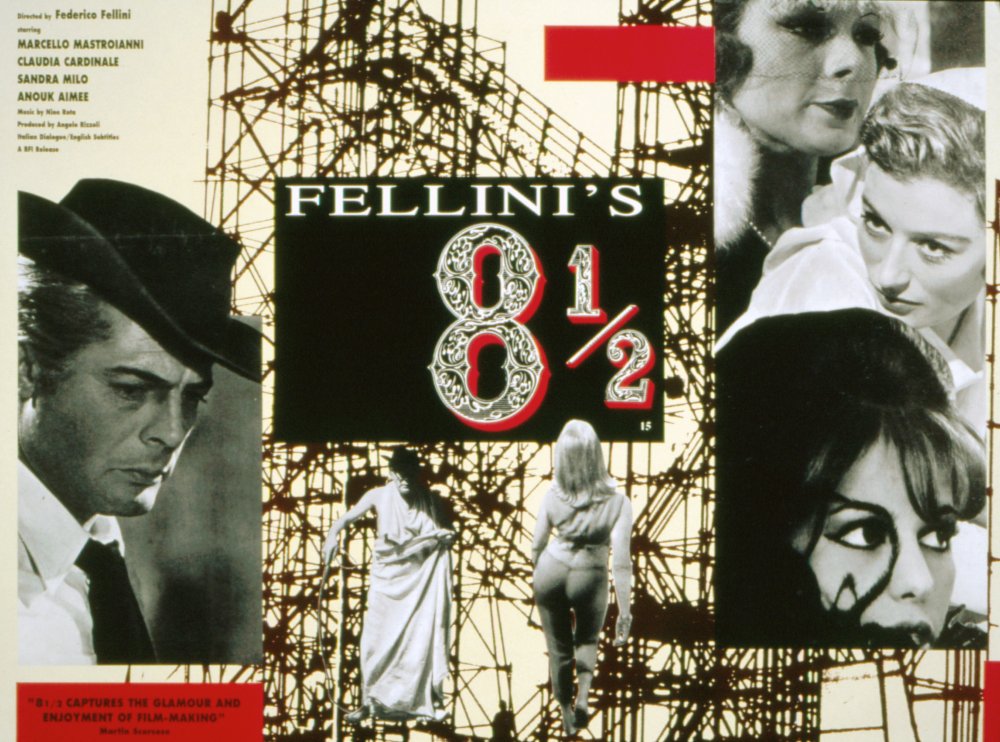 Creative block has rarely been overcome as triumphantly, and with such vim and vigour, as Federico Fellini managed with his magnum opus 8½ (1963). The talk of the town (indeed most of the film world) after La dolce vita (1960), the great Italian director found himself wondering how he’d manage to top this era-defining film fresco about the social elite in Rome at the turn of the 1960s.

His solution? To turn this creative impasse, and the hectic circus of his life as a celebrity director, into his subject. Named so because Fellini had so far completed seven solo features, two sections of anthology films (counting as halves each) and had a co-directing credit with Alberto Lattuada on 1950’s Variety Lights (another half), 8½ was literally the sum of Fellini’s career to date, an exuberantly autobiographical film about the trials, temptations and tribulations of being a filmmaker.

Starring Marcello Mastroianni as Guido Anselmi, a lauded filmmaker struggling to find the inspiration to bring his new science-fiction epic to life, Fellini’s classic simulates the chaotic life of a director – the creative decisions he must make, the sycophants he encounters, the beautiful women, journalists and producers who people his existence – while frequently digressing into reveries of his past, dream sequences and bawdy fantasies.

Fifty years ago, 8½ premiered in Rome to a mixed audience reception (Fellini’s latest lacked the zeitgeist-y scandalousness of La dolce vita) but ecstatic reactions from many critics. Fellini had spent the winter editing the film, previewing two versions in a Rome studio that January: one with a downbeat ending, the other with all the characters from Guido’s life past and present joining together for an exhilarating circus parade. It was this latter, more optimistic finale which proved the most popular and made it into the finished film.

From Italy, Fellini’s film was shown out of competition at the Cannes Film Festival in April, then in July was screened for an audience of 8,000 people in the Kremlin for the 3rd Moscow International Film Festival, where it won the Grand Prize. Releases in the US, the UK, and across Europe followed throughout 1963, the film quickly establishing itself as an intellectual and cultural event. It won the Academy Award for Best Foreign Film at the 1964 Oscars, also scooping an Oscar for Best Costume Design and nominations for Best Director, Best Original Screenplay, and Best Art Direction – rare feats for a foreign language film.

And, 50 years later, such high regard shows little sign of running out of steam. In the most recent of Sight & Sound magazine’s once-a-decade polls to determine the greatest films ever made, as chosen by critics and filmmakers, 8½ was voted in at number 10 by critics and number four by directors. Filmmakers, unsurprisingly, seem to have taken to this dazzlingly inventive portrait of their profession.

Only an elaborate Fellini-esque parade would truly suffice to celebrate this great film’s half-century, but this collection of stills, posters and pressbooks from the time stands as our own modest way of raising a glass.