Will the real Mrs Hitchcock please stand up? 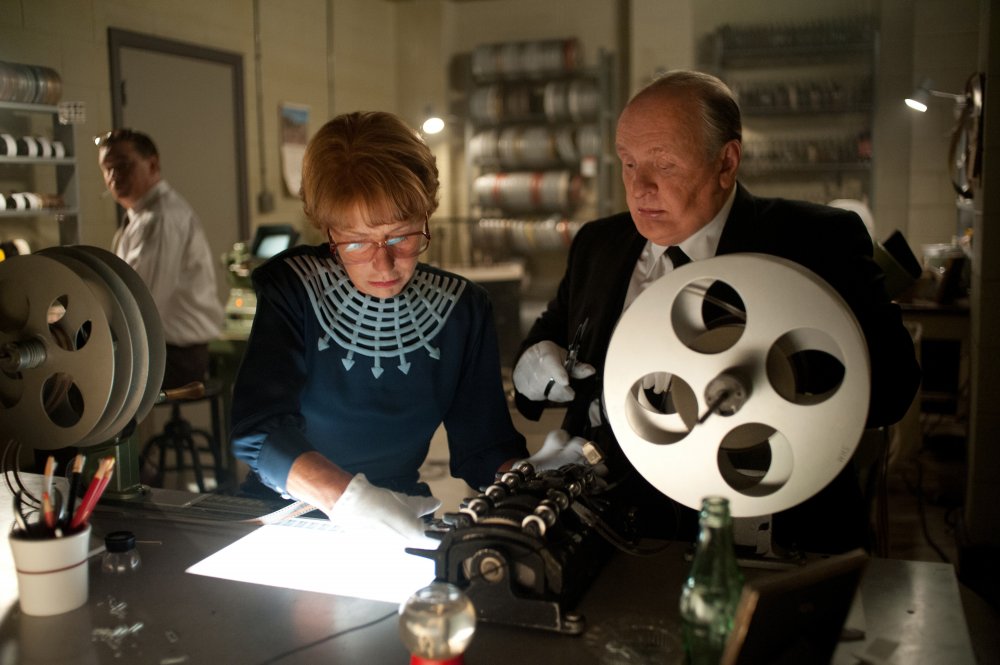 When Alma Reville, wife of Alfred Hitchcock, died in 1982, Charles Champlin wrote in the LA Times that “the Hitchcock touch had four hands and two of them were Alma’s.” While Hitchcock received most of the credit for the 54 films he directed, Alma’s significant contribution should not be underestimated.

Two recent biopics, the HBO/BBC drama The Girl and the feature film Hitchcock, bring the relationship between the Hitchcocks into the spotlight. The two actors playing the portly director, Toby Jones and Anthony Hopkins, give an almost identical interpretation – well known for his size, voice, chin, deadpan delivery and rather lewd sense of humour, Hitchcock has become an iconic figure. But the presentation of Mrs Hitchcock differs greatly in the two dramas.

Imelda Staunton takes the role in The Girl; physically much more similar to the real Reville, she portrays a rather meek woman who, fully aware of her husband’s infidelities – whether real or fantasy – chooses to ignore them. Something of a victim, she even feeds his obsession with blondes, spotting Tippi Hedren in a TV commercial and suggesting her for The Birds (1963).

Helen Mirren, in Hitchcock, is taller and more physically striking than Reville actually was. She is forceful and decisive, saving the production of Psycho (1960) while Hitchcock languishes in bed (a complete fiction, by the way). It is she who is tempted to have an affair, driving her husband to distraction while he fruitlessly tries to ingratiate himself with Janet Leigh.

Alma Reville with Alfred Hitchcock and their daughter Patricia

So which is the more accurate presentation of the woman behind the man? Perhaps unsurprisingly, the truth lies somewhere in between. When Hitchcock met Reville in 1920, she had already been in the film business for five years and was well established as a cutter, scenario writer and floor secretary. He was a lowly titles artist and had to wait three years before he had reached a position in which he felt he could approach her.

They worked together at Gainsborough Studios and some there felt that she could have been a film director, although she herself was modest on this point: “I’m too small,” she said, “I could never project the image of authority a director has to project.” Other views of her tell a different story, and Alma has been described as “brisk, sometimes even brusque” and “much shrewder about people than Hitchcock, and a lot tougher.”

Alma and Alfred became Mr and Mrs Hitchcock on 2 December 1926. While she still worked on films by other directors until the mid-30s, she suppressed whatever personal ambition she may have had and devoted herself to supporting and encouraging her husband and bringing up their daughter, Pat. His eventual success allowed her to live a lifestyle she could never have dreamed of when she first began as teagirl at Twickenham Studios aged 16.

She learnt many different skills during her time in the British film industry, which stood her in good stead to offer advice wherever needed during production of Hitchcock’s films. From finding properties for him to produce, to casting, scouting locations, plotting camera angles and checking rushes, there were few areas that Alma didn’t contribute to. Once in Hollywood, she was less frequently seen on the set of his films, but was a key collaborator behind the scenes on every project.

Imelda Staunton as Alma Reville in The Girl (2012)

Perhaps her greatest contribution was via the screen adaptations she worked on, for Hitchcock and others. Of the films on which she has a writing credit, it’s striking how many contain strong, well-drawn female roles. Take, for example, The Constant Nymph (Adrian Brunel, 1928), The Water Gipsies (Maurice Elvey, 1932), and The Passing of the Third Floor Back (Berthold Viertel, 1935), or Hitchcock’s Suspicion (1941), The Paradine Case (1947) and Stage Fright (1949), to name a few.

Stage Fright is the last film Alma was credited on; apparently the failure of Under Capricorn (1949), a property she had recommended to Hitchcock, led her to lose confidence in her judgement. Her absence shows; while Hitchcock’s later films are among his best regarded, the female roles tend to be less deeply examined, the action usually driven by the male protagonists. One wonders whether Marnie (1964) would have been more successful if Alma had had a hand in writing the script; despite the contribution of Jay Presson Allen, its study of an emotionally damaged woman is psychologically undermotivated.

Hitchcock was honest about his lack of understanding of the opposite sex: “I never understood what women wanted. I only knew it wasn’t me,” he once said wistfully. The onscreen portrayal of him as a man desperately attempting to seduce his blonde starlets seems a little overstated; as biopics often do, it feels as if drama has been created where none really exists. Certainly, Alma’s affair with writer Whitfield Cook, if it did take place, would have been long over by the time Psycho (1960) was being made.

While the real Alma Reville is still a little obscure, it’s only right that she is at last receiving recognition for her contribution to Hitchcock’s films. As the director said, in his speech at the presentation of his AFI lifetime award in 1979, if it wasn’t for her, he may well still have been at that gala dinner, but as “one of the slower waiters.”