Skyfall is revealed as number one film at UK box office for 2012, with The Woman in Black the highest-grossing UK independent film. 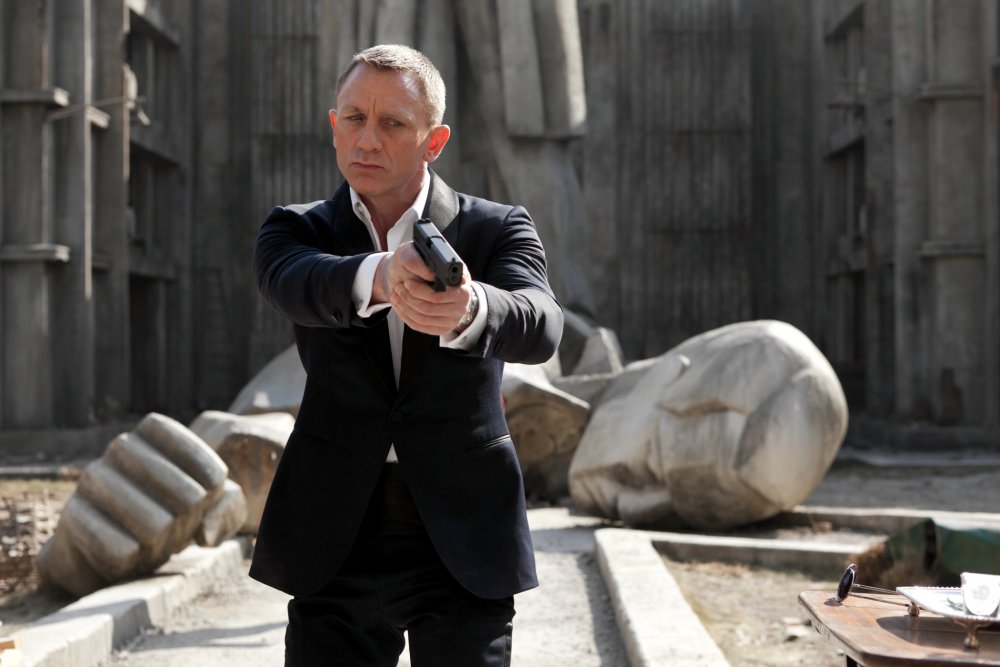 Independent figures published today by the BFI reveal that audiences are continuing to show their love for film with cinema admissions and box office for 2012 showing an increase on the previous year.

The latest research data and market intelligence from the BFI Research and Statistics Unit which tracks business and cultural aspects of the UK film industry, shows that cinema admissions increased by 0.5% in 2012 to reach 172.5 million, the second highest level in the last 10 years, bringing in over £1 billion at the box office.

British films from mainstream blockbusters such as Skyfall and Prometheus to independent films such as The Woman in Black, The Iron Lady, Salmon Fishing in the Yemen and The Best Exotic Marigold Hotel gave the UK a combined market share of 32% (22.9% for US studio-backed films, 9% for British independent films).

2012 was a spectacular, historic year for the UK with the 2012 Olympic and Paralympic Games and the Queen’s Diamond Jubilee celebrations gaining massive public attention and participation. Although the early summer marked an unsurprising downturn in cinema business, some of the weekend box office results during the national celebration period were among the highest of the year. For example, the second weekend of the Olympic Games, including ‘Super Saturday’ produced the sixth highest weekend of the year for the cinema business. Films on release during that period included Ted and The Dark Knight Rises.

The Bond film Skyfall, most of which was filmed in the UK during 2012, was also the overall UK box office leader taking £102 million and still currently playing in cinemas. Other US-studio backed UK films (featuring British filmmakers, crew, studios, locations, etc), included The Dark Knight Rises, Prometheus and War Horse.

In addition to attracting audiences, these internationally successful British films also showcase British filmmaking expertise and the excellence of the UK’s production services, facilities and crew. 2012 has also seen increased investment in UK production facilities with the opening of the new £100 million Warner Bros Leavesden Studios as well as the studio’s investment in a world-renowned London sound studio. Pinewood Studios also opened its new Richard Attenborough Stage and is planning to double the capacity of the studios as well as investing directly in feature film projects. 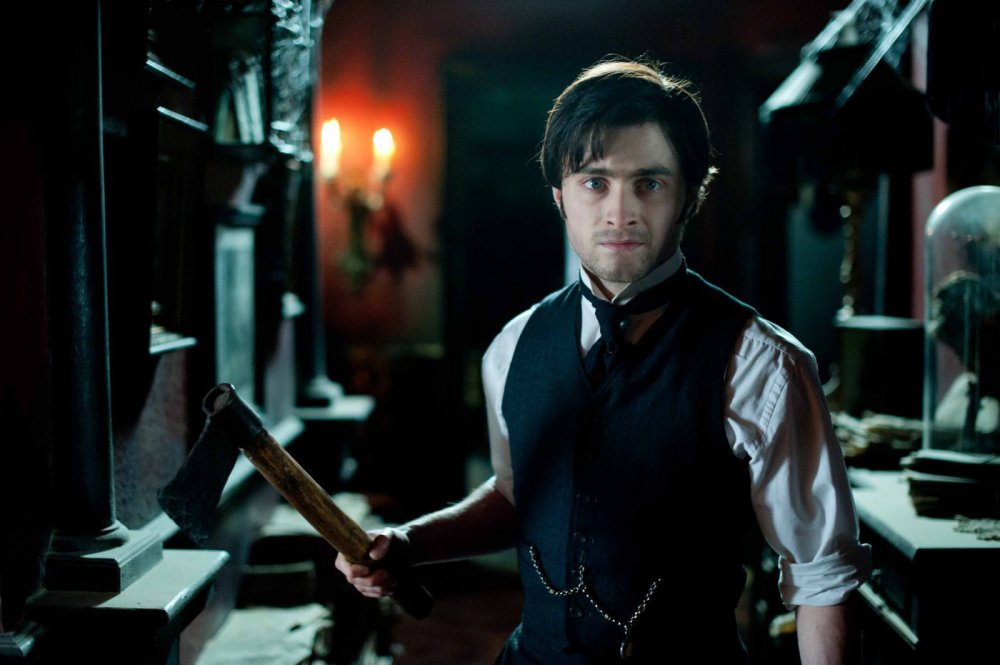 2012’s leading UK independent film release The Woman in Black became the fifth biggest independent UK film to be released with over £21 million at the UK box office, followed by The Best Exotic Marigold Hotel with £20.4 million, and The Iron Lady and Nativity 2: Danger in the Manger! earning more than £9 million each. Nine of the top 20 independent UK films were co-funded by the Lottery through the BFI’s Film Fund: The Woman in Black, The Iron Lady, Salmon Fishing in the Yemen, Seven Psychopaths, StreetDance 2, Shame, Great Expectations, The Angels’ Share and Shadow Dancer.

The total investment in UK-based film production in 2012 was £927 million, a 29% drop on 2011’s record-breaking £1.29 billion. This total includes increased production investment for domestic UK productions and co-productions.

UK films accounted for £900 million of investment across 218 films. Within this figure there was an increase in the amount of investment in UK domestic films such as Belle, Spike Island, The Invisible Woman and Les Misèrables, totalling £223.5 million, a 16% increase on 2011’s £192 million, although fewer films went into production – 159 compared to 238.

However, there is a time lag in obtaining information on all low and micro-budget activity in the UK until later in the year and therefore the overall number of productions for 2012 is likely to increase by the time that data is consolidated. The expenditure on co-productions where British film companies work with international partners to fund and make films such as A Long Way Down, I Give It a Year and Long Walk to Freedom, also saw an increase in production spend in the UK with £73 million from 38 films, an increase of 17% on 2011’s investment of £62.3 million.

International inward investment films which played a major part in achieving 2011’s record-breaking year for production spend, saw a drop in the number of films being made and the amount of production spend which reflects a flattening out of global film production investment. In addition, the production spend on Skyfall was accounted for in 2011 although it filmed in the UK through to May.

A total of 26 films including All You Need Is Kill for Warner Bros and starring Tom Cruise, Red 2 for Lionsgate/Summit with Bruce Willis, Jack Ryan for Paramount with Chris Pine, Fast and Furious 6 and Kick Ass 2 both for Universal contributed £631 million compared to the 34 films in 2011 which spent £1 billion.

For the full report see here.

The top 20 films released in the UK and Republic of Ireland, 2012 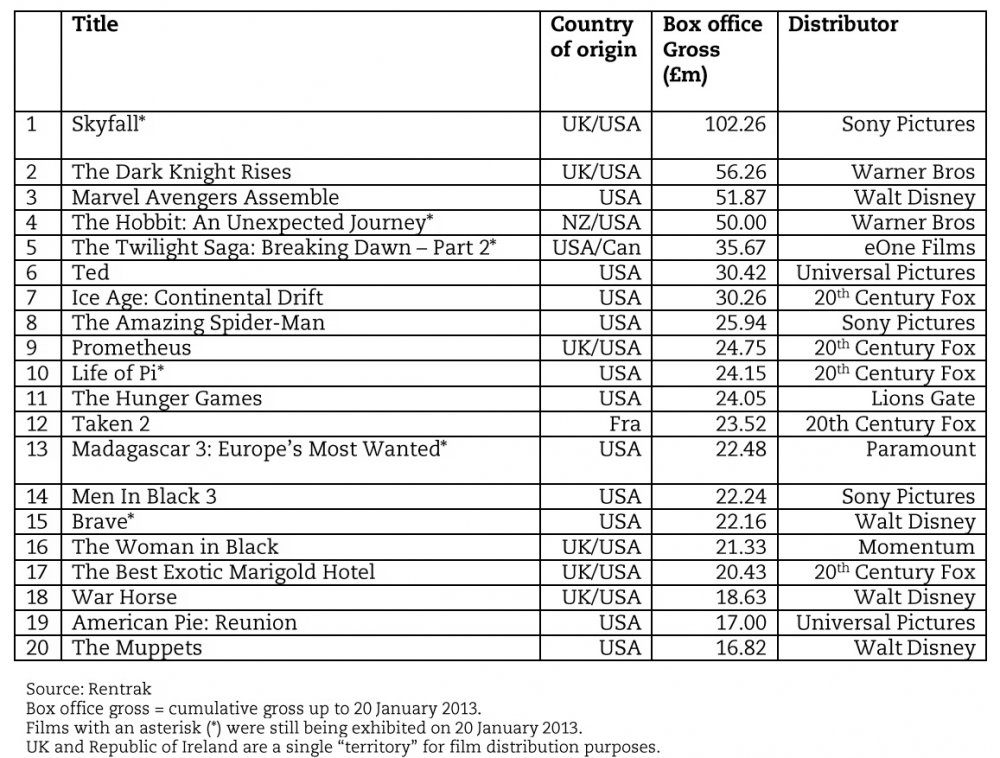 The top 20 independent UK films released in the UK and Republic of Ireland, 2012 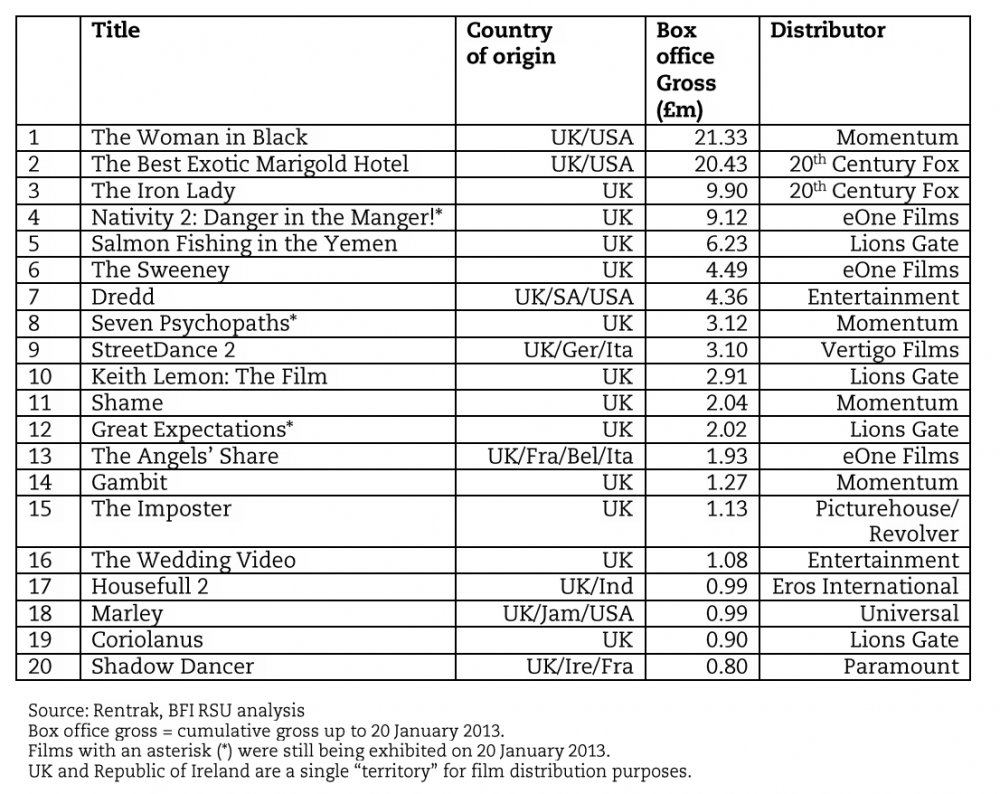