Animated visions: the Larkins Studio and River of Steel

The earth is transformed into a cubist battlefield in the imaginative work of the Larkins Studio. Curator Jez Stewart admires these highlights of mid-century British animation. 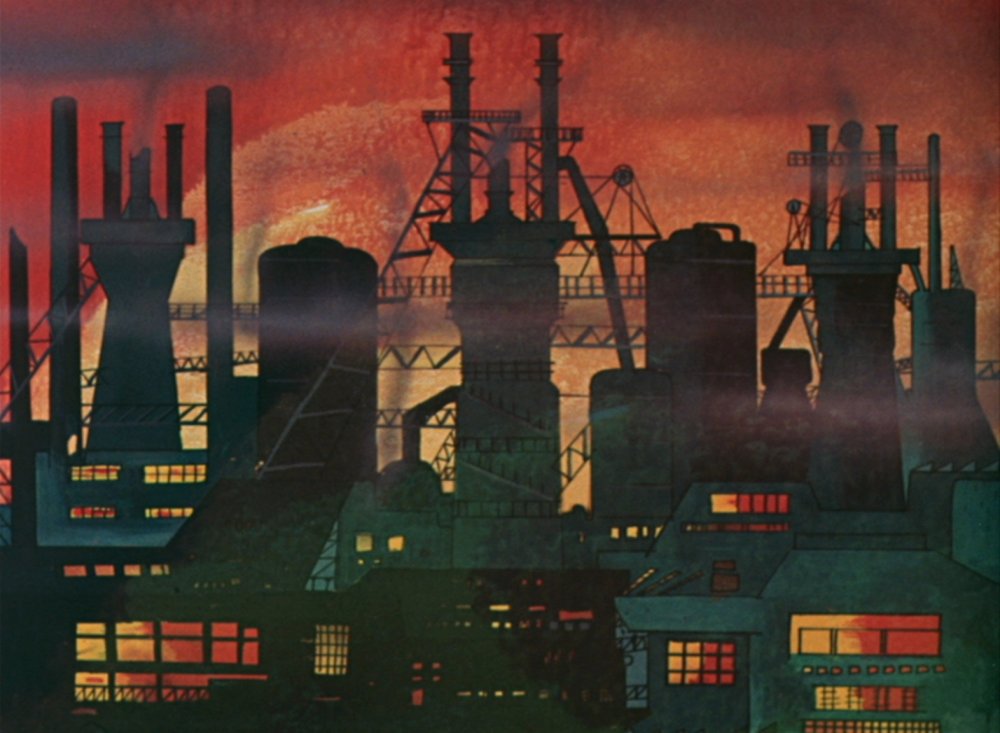 In his influential (and damn good looking) book Cartoon Modern, Amid Amidi takes a brief diversion from his study of American postwar animation to mention British animation design, and cites the Larkins Studio “as one of the great lost studios of animation history.” The BFI’s Steel project offers an opportunity to rediscover a couple of Larkins films which help reveal what a remarkable company it was.

William Larkins was an art director at the J. Walter Thompson advertising agency, but at the start of WWII he saw an opportunity to get into the animation industry. He thought stop-motion animation would be perfect for making effective training films for aircraft pilots and went into partnership with Anson Dyer, Britain’s most successful animator at the time.

Shortly afterwards Larkins made contact with German émigré Peter Sachs, who he knew from his work on a series of animated cinema commercials for Horlicks, made at George Pal’s studio in Holland. With Sachs on board, Larkins no longer had need of Dyer and W.M. Larkins Studio was born in London.

Larkins himself had little to do with the company that carried his name, seemingly due to ill-health, and it was Sachs, along with Larkins’ sister Phil Windebank, who set the tone for the company in its first phase. The other decisive influence followed from the enlistment of the studio in the Film Producers’ Guild, a group of production companies that had joined forces to produce sponsored documentaries and instructional films for big business. 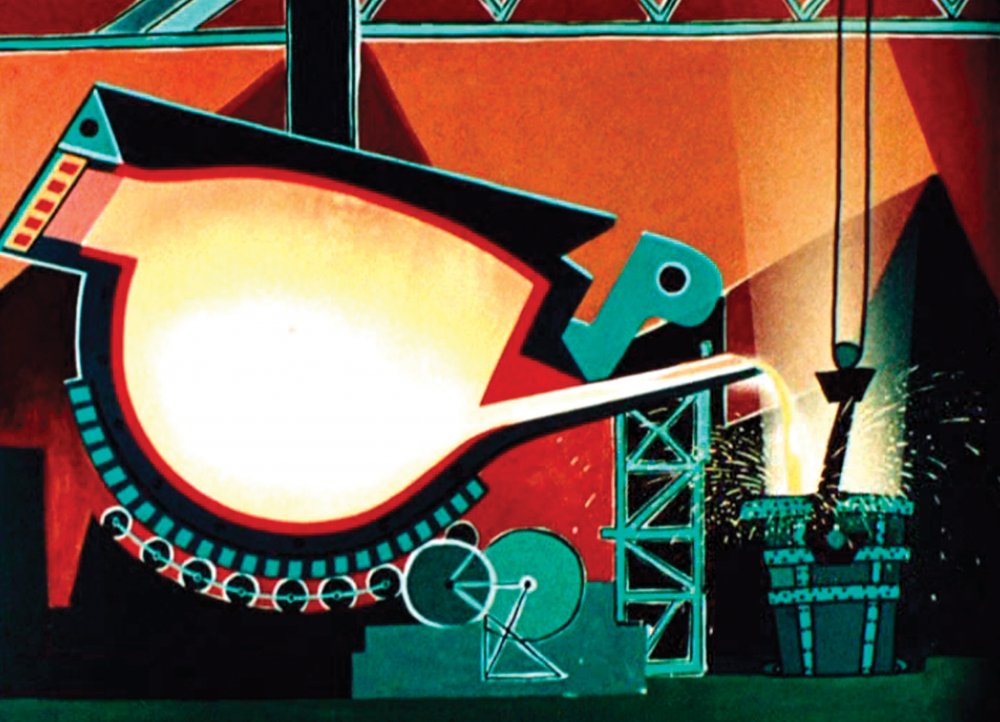 River of Steel, made for the British Iron and Steel Federation, was one of many successful films that Larkins produced in a busy 1951, and I think that the first half of the film in particular shows the Sachs period of Larkins at its very best. A look at the script and storyboard would probably suggest little more than a common story of the production process for steel from ore to sheet. But the execution of the final film is a modernist delight, with frame after frame revealing designs that would not look out of place on a gallery wall.

Line, perspective and colour fire across the screen with a clear cubist influence. The art direction is credited to a one-off collaboration with Spanish surrealist painter Oscar Domínguez, and the opening scenes of the earth’s core certainly show textures reminiscent of his use of the ‘decalcomania’ technique of crushed gouache.

The second half of the film, which represents a world without steel, is less successful, but has some great moments, including a scene featuring four workmen morphing between a series of striking, held poses that is reminiscent of contemporary dance. 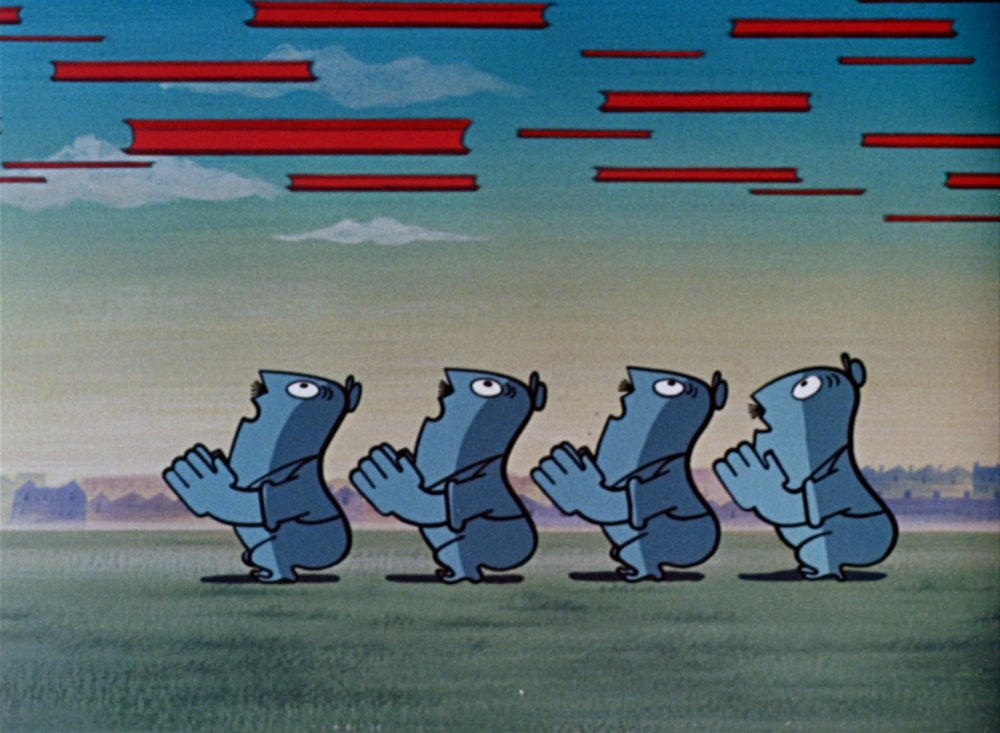 Peter Sachs left Larkins in 1955 and the studio underwent a series of changes that left it under the artistic control of three younger artists who had served their apprenticeship under Sachs: Denis Gilpin, Beryl Stevens and Richard Taylor. Earth Is a Battlefield (1957) is a film from that transition period, also made from the British Iron and Steel Federation, which shows the development of the studio’s style. It retains, a little reluctantly, the pun-filled, doggerel commentary by Roger MacDougall that featured in many earlier films, including River of Steel, but its design is much sparser than the earlier films.

Richard Taylor, who directed and co-wrote the film with MacDougall, worked with designer Alan Gray on a fragmented character design and background design that included only what was essential for action on the screen. Characters have rounded, pebble-shaped heads, as well as hands, feet and bodies, but there is nothing connecting them together. A forge, a few tools, and an anvil are all that are used to sketch out a blacksmith’s workshop, over simple background washes. 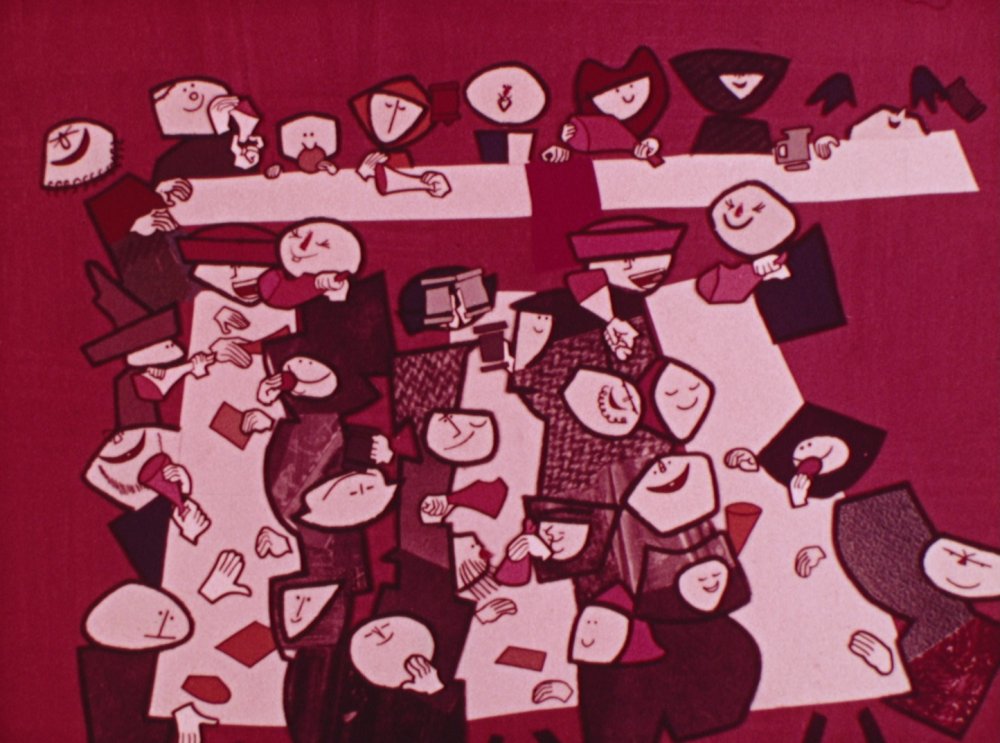 Taylor and his colleagues were admirers of the work of the UPA studio and its associated directors, and that influence rings clear in this and others of their films. But there is also a legacy from the departed Peter Sachs in the playfulness and experimentation in the execution. One short scene uses cut-outs and fabrics to give texture to clothes, which is typical of the ‘let’s give it a try’ atmosphere that he seemed to foster.